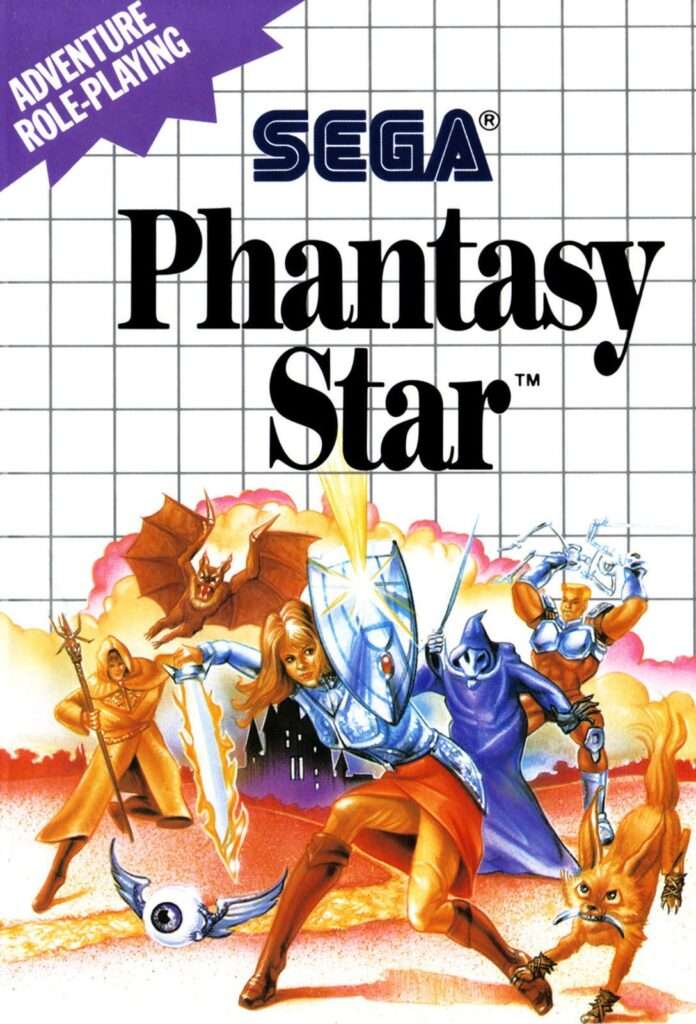 When I was growing up in the 80’s, there were two types of kids. Nintendo kids and SEGA kids. I, like most others, was firmly committed to Nintendo. But, those kids that stood with SEGA always had a reputation for being extremely loyal to their underdog console. I’ll admit, my exposure to SEGA consoles was limited. But I never regretted my alliance. Well… mostly. If there was one thing that might have tested my loyalty, even for a moment, it was Phantasy Star.

Phantasy Star was SEGA’s premier RPG. I remember seeing an advertisement for it in a magazine and immediately wished I could get my hands on it. Everything about the game appealed to me. The colorful graphics, the Wizardry-like dungeons, you name it. This was a game that seemed tailor-made to match my interests. But, despite my desire to play it, I never had the chance to experience it for myself – until now. For quite some time now, SEGA has been re-releasing classic games under the banner: SEGA AGES. These releases feature retro SEGA games either in their original form, or enhanced for more modern consoles. Over the years, Phantasy Star has only seen a limited number of releases in the west. The most obtainable way to play the original game was a collection for the Game Boy Advance. But, the only way to experience it on a home console (aside from the original SEGA Master System) was via the imported PS2 title: Phantasy Star Complete Collection. Thankfully, players no longer have to result to overly expensive imports. SEGA has finally released an enhanced version of the game through the Nintendo Switch store. For anyone who has always wanted to experience the game, this is the version that I recommend. 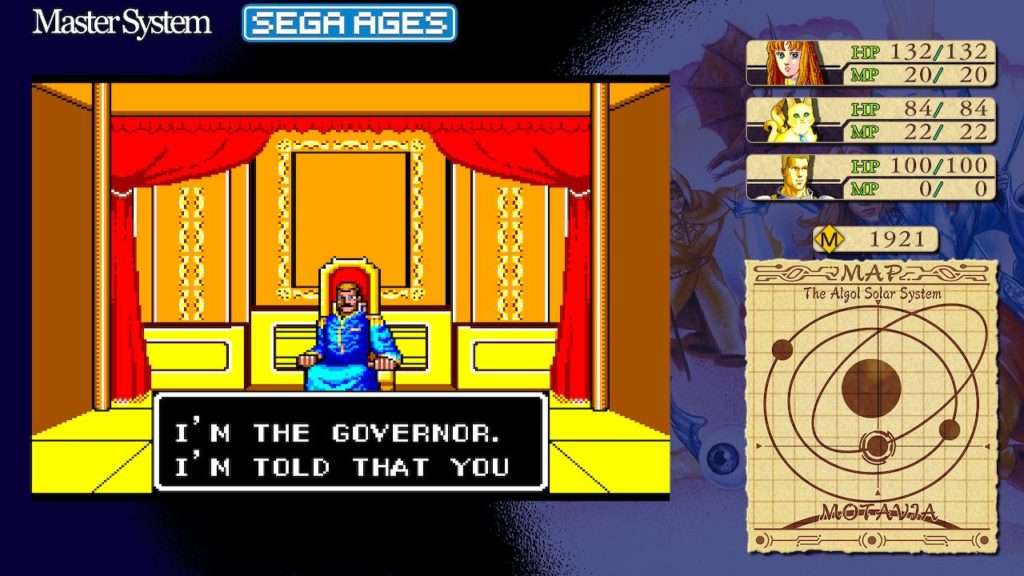 Usually, when it comes to retro games, I’m a bit of a purist. I don’t mind the graphical or audio enhancements that are usually found in re-releases. But I take great offense to any additions that radically change the way the game is played. The Switch version of Phantasy Star is a rare exception to this rule. First of all, it’s important to note that if you want to play the game as it was originally released,  you can certainly do that. But the SEGA AGES release also includes a few welcome options that makes the game a little easier to digest for modern players.

First of all, if playing in “Ages Mode”, enemy encounters are less frequent than they were in the original game. Also, both experience points and gold are accrued at a higher rate. This may seem like cheating, and I guess in a way it sort of is. But if we’re being honest, most RPG fans would simply turn to the tactic of grinding away experience points early in the game, for hours on end, to make blowing through the last half of the game a breeze. This tweak basically takes away the grind so players can dive right in to the meat of the game. Again, this enhancement is completely optional. Second, the “Ages Mode” also features an auto-map system for the game’s first-person dungeons. Yes! Phantasy Star features grid-based dungeons (something I absolutely love). Back in the day, players would have to sit down with a pad of graph paper and map out these dungeons step-by-step or risk getting lost in the labyrinth. Now, this really isn’t a bad thing. Personally, I used to love mapping dungeons in Wizardry. But now, the game does it for you. Yes, you still have to explore the dungeons yourself for the auto-map to start working. But you no longer have to set the controller down and pick up a pencil and pad of paper. It’s just more convenient. 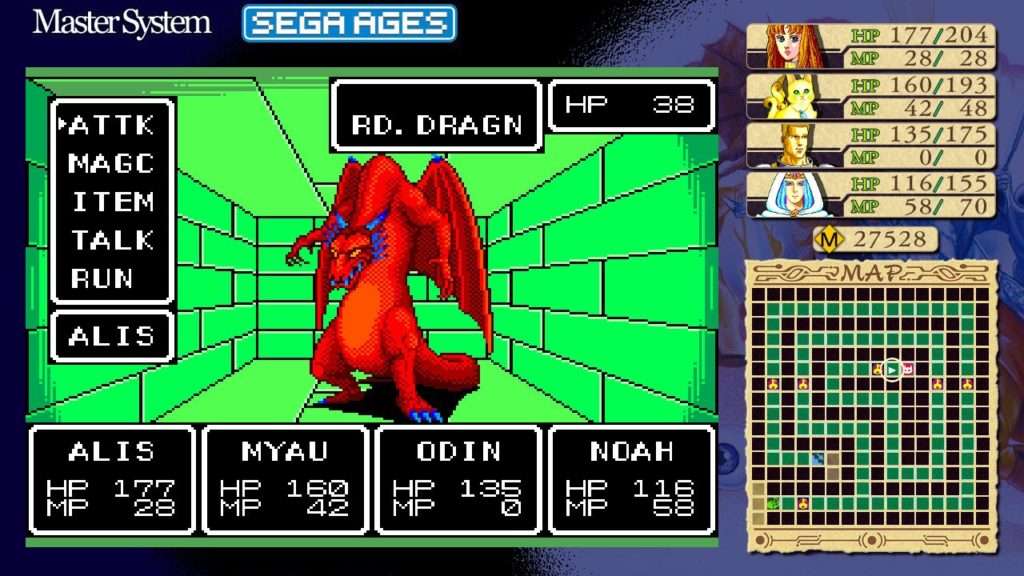 So now that we’ve covered some of the most important changes in the game’s re-release, just what is Phantasy Star all about? Well, as you have probably guessed, it’s an RPG. But one that mixes fantasy with Sci Fi. The story for Phantasy Star is simple. It takes place in a far away solar system. The system is ruled by a tyrant named Lassic. As time has gone by, Lassic has only become more and more brutal with the citizens that inhabit the planets in his system. As a result, a rebellion has sprung up. One day, a rebel soldier launches an attack on Lassic’s forces and is killed in the process. The rebel’s sister, a young girl named Alis, vows to take revenge on Lassic for the death of her brother. This is where the game begins. The player controls Alis and she explores the various towns and planets in the system, seeking allies and clues on how best to overthrow the ruthless King Lassic.

From here, Phantasy Star plays just like nearly any other RPG. Alis must talk to NPCs, decipher clues, recruit party members, obtain new weapons and armor, learn new skills, etc. A large portion of the game is played in an overhead view, much like the early Final Fantasy or Dragon Quest games. But, as I mentioned earlier, when descending into a dungeon, the game shifts to a first-person view.

The thing I think I like best about Phantasy Star is the perfect blend of science fiction and fantasy. The game will feel right at home to anyone that enjoys classic-era RPGs. But it also projects an element of something somewhat unfamiliar at the same time. It really works well. I can’t wait to see what the rest of the series has to offer. It’s a shame I waited this long to dive in to the Phantasy Star experience. If I had grown up with this game, there’s no doubt I would have become a lifelong fan. It’s a near perfect example of first generation console RPGs. 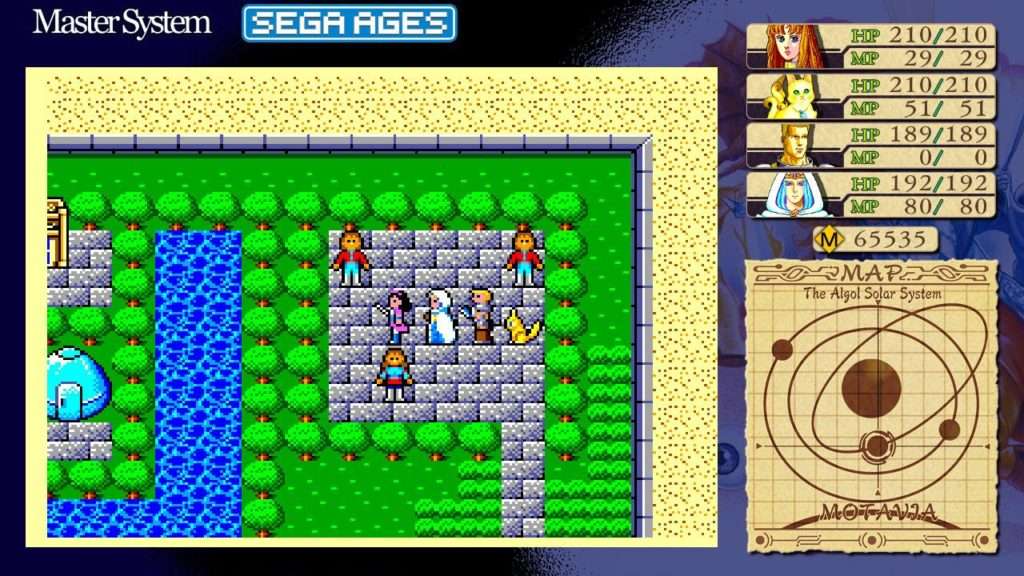 Difficulty: Medium –  If playing this game in “Ages Mode” on the Switch, you’re in for an admittedly laid back experience. The changes made to the game make it much easier than it was back in the old days. If playing the game without all of the updates, you will find more of a challenge. However, as is often the case with old RPGs, it’s very easy to grind your way to an overpowered state early in the game if you’re patient. Doing so makes the game a cinch. So in reality, if you’re willing to grind, Phantasy Star shouldn’t prove too challenging.

Story: The story for this game is not exactly unique. PC games had long been mixing together classic fantasy and Star Wars-like sci-fi for years. But this was the first time it had really been seen on a home console. The story itself is pretty basic, but very well done. I feel there could have been a bit more depth. But overall, this doesn’t end up detracting from the game in any way.

Originality: Again, the mixing of Sci-Fi and fantasy was a bit of a new concept for many players at the time. Plus, Phantasy Star has a very “anime” feel to it – in a time before anime was popular. All of this made for a pretty unique experience for players at the time of release.

Soundtrack: The music for this game is catchy, but sometimes it feels a bit out of place and quirky. Even so, I have to admit that I found it quite enjoyable. If playing this game on the SEGA Master System, you’re going to be in for a slightly disappointing experience. The music for the original US release pales in comparison to the Japanese version (which was boosted by the FM Sound chip). Thankfully, both the PS2 and Switch versions of the game feature the better of the two soundtracks.

Fun: As a fan of RPGs, I found this game to be very enjoyable. It pushed all of the right buttons. The story, the visuals, the gameplay – you name it. Phantasy Star is a blast.

Graphics: For an 8-bit RPG, Phantasy Star looks great! People can say what they want about SEGA, but that system boasted some pretty impressive graphics. This game is a perfect example. The monster sprites are detailed and the overhead map makes great use of color. Good stuff!

Playcontrol: Fair warning here – I’ve never played this game on its native hardware. So I have no idea how it may feel with a SEGA controller in your hand. But, when playing on the Switch I experienced the game with both the Joy Cons (on the screen and on the handle), and with the Pro Controller. The game controls were responsive and accurate no matter what hardware I used. Standard RPG fare here.

Value: Finding a copy of the GBA or PS2 collections these days can be a bit difficult. If you do, you’re going to have to open your wallet. I’ve seen some of them sell for $80-$130. Thankfully, the Switch release is only $7.99. For that price, you simply can’t go wrong.

Overall score (1-100): 80 – While not the most engaging RPG experience of its time, Phantasy Star is a pretty solid title with some really unique aspects. If you like retro RPGs, this is a game worth checking out. For years, Phantasy Star was a gem that many gamers knew existed, but only a rare few had a chance to enjoy. Thankfully, that has changed. If you’re curious what all the hype is about, there’s never been a better time to find out. Let’s hope SEGA continues the trend and releases some of the other games in the series this way.