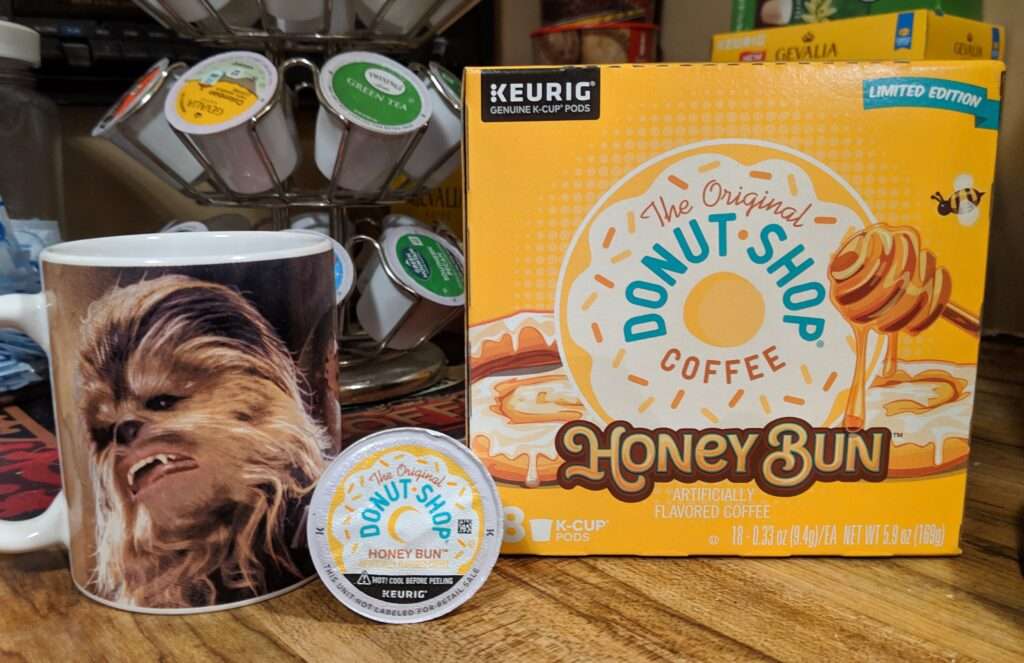 During my recent trek to find new K-Cup varieties, I came across a new Donut Shop flavor that I had never seen before; honey bun. Now, it’s no secret that plain Donut Shop is one of my all time favorite K-Cups. Also, of their flavored offerings that I’ve encountered thus far, only one failed to impress. With this in mind, I was curious to give this one a taste.

Now, I’ll be up front and state that I’m personally not a big fan of actual honey buns. I mean, they are alright. But I never find myself saying “Damn. I sure would like a honey bun right about now!” So, I wasn’t really expecting to be blown away by this one. Thankfully, I couldn’t have been more wrong. This coffee is seriously good. First of all, it has a nice sweet aroma that really filled up my kitchen during the brew. It actually smells like real honey and cinnamon (which surprised me). Tasting the cup had the same effect – surprisingly good. The coffee itself is a light roast. Yes, it’s artificially flavored, but it doesn’t taste fake. In fact, if I didn’t know better, I’d think my cup was sweetened with real honey. Despite being a light roast, the coffee itself is flavorful with just a bite of cinnamon in the finish. I’m not sure what type of wizardry Keurig was able to put together here, but it works.

I was extremely pleased by this purchase and I will certainly be grabbing another box. The only bad this about this coffee is the fact that’s is a seasonal release. If you’re curious, I’d suggest hunting this one out asap. It’s a only available for Spring.

Would Purchase again?: Yes! I didn’t expect to like this one, but I did. In fact, I liked everything about this cup. Good unique flavor, not overpowering. Must buy.