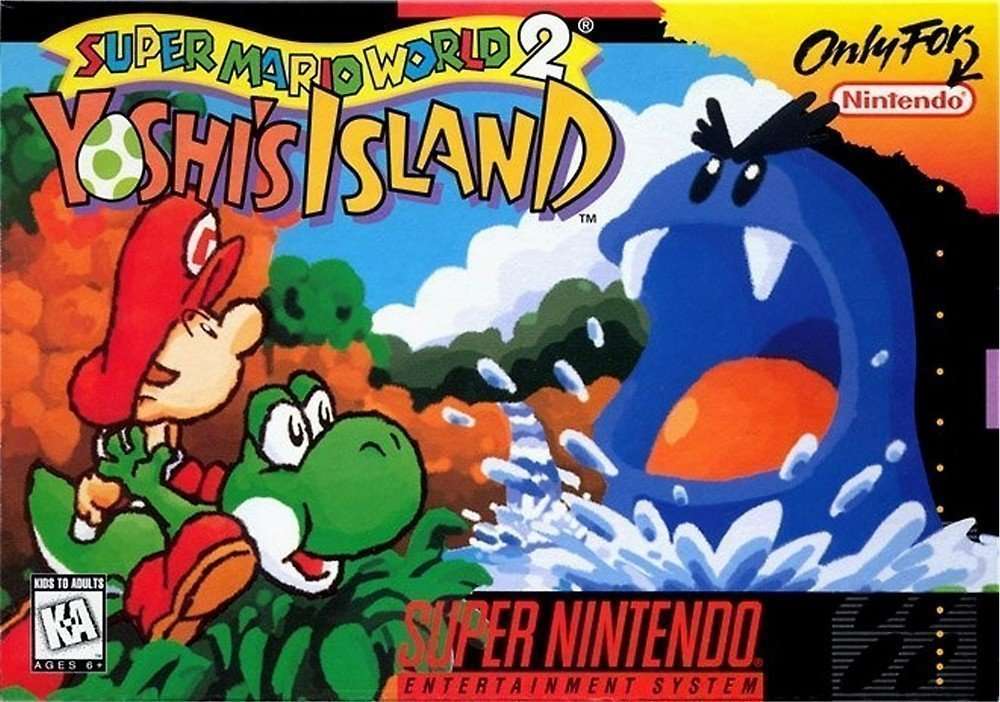 This is a game that I’ve wanted to review for a very long time. Years ago, when I played through the bulk of my Super NES backlog, Super Mario World 2: Yoshi’s Island was one of the titles on my to-do list. However, at the time, I did not own a physical copy, nor was it available on the Virtual Console. In fact, for many years the original release of this game was virtually unobtainable to anyone who didn’t own the original hardware. So, until I was able to find a viable solution, I put this game on the back burner. Now, with the release of the SNES Classic, Yoshi’s Island is once again available to anyone lucky enough to have obtained one of these precious consoles. I suppose I should take a moment to note that there is a version of this game that was released for the Gameboy Advance in 2004. However, that edition of Yoshi’s Island was slightly modified for smaller screens and also included some additional content. For this reason, I decided long ago to stick with the original SNES version for my review. The time has finally come.

Yoshi’s Island is a very interesting entry in the SNES catalog. First of all, it was released in 1995, towards the end of the system’s lifespan. As a result, it is one of the most technologically advanced SNES titles ever produced. This game was the very first to employ the use of the Super FX2 graphics chip (a more powerful version of the legendary Super FX chip that was the powerhouse behind Starfox). The inclusion of the Super FX2 chip, is largely responsible for the game’s unique art direction – more that later.

The Mario franchise is not particularly known for its rich storytelling. But, if you’re keeping up with your Mario lore, Yoshi’s Island would chronologically be the first game in the series. It tells the story of how an infant Mario came to meet his good pal, Yoshi. You see, as the stork was delivering baby Mario and Luigi to their parent’s, he was ambushed by Kamek (one of Bowser’s pesky koopa generals). During the scuffle, Mario falls from the sky where he is rescued by Yoshi and his friends. However, even as a little baby, Mario knows that his brother Luigi is in trouble. Using the the instinctive bond he has with his twin, Mario helps guide Yoshi on a quest to free Luigi from the grasp of the dastardly Kamek. 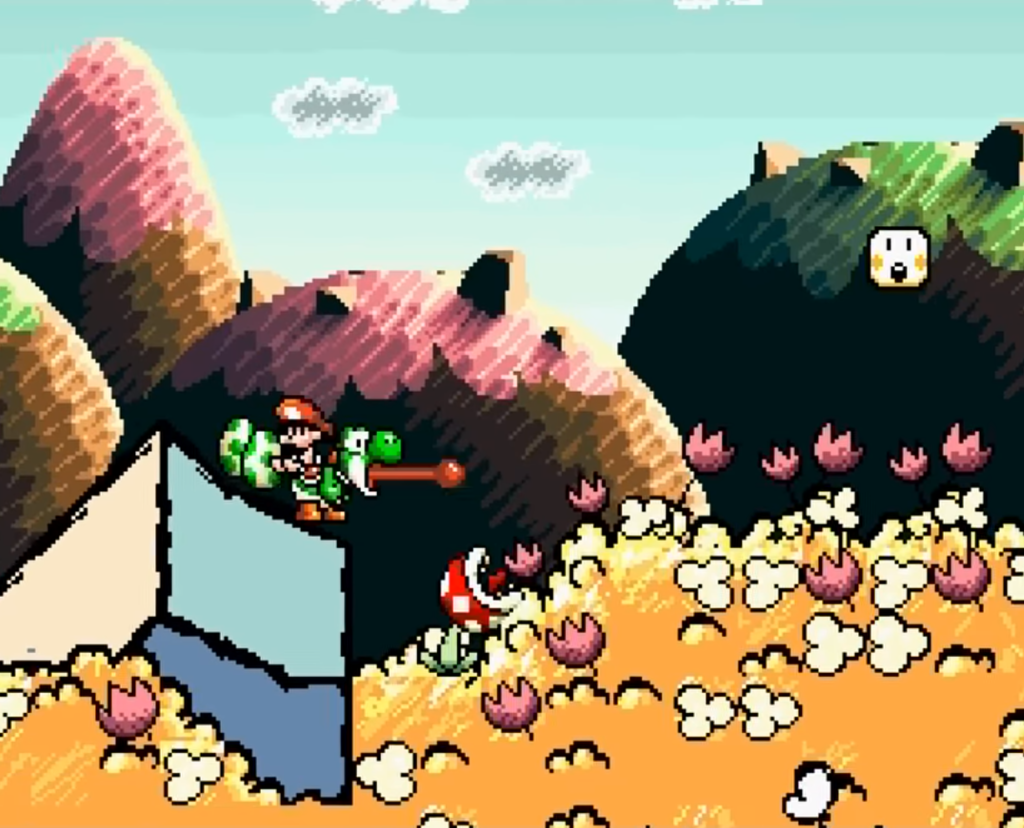 Like all other Mario titles before it, Yoshi’s Island is a platformer. In this game, players control Yoshi, as he carries Mario on his back in search of Luigi’s whereabouts. As you might expect, the gameplay consists of attacking enemies, avoiding damage, jumping from spot to spot, and trying to reach the goal at the end of each level. But before you roll your eyes and assume it’s just more of the same, you might want to take a closer look. As far as retro platformers go, this game is about as complex as you can imagine. It seems that Nintendo has taken every trick in the book and poured it into this game. Yes, the gameplay will immediately feel comfortable to anyone familiar with the series. But, Yoshi’s Island contains a thoughtful complexity that is both welcome and refreshing. For example, in a somewhat surprising twist, Yoshi is nearly invincible. However, when he is struck by an enemy, Mario will fall from his back – this starts a countdown timer. Yoshi must recover Mario before the timer reaches zero, or baby Mario will be captured by Kamek’s minions, causing Yoshi to lose a life. At the end of each level, a different Yoshi is waiting. Mario is passed from one Yoshi to the other. That new Yoshi (usually one of a different color), will then escort baby Mario through the next level.

For the most part, playing as Yoshi feels nearly identical to how it did in the original Super Mario World. But this time, there’s a few differences. The most obvious example is that aside from chomping down on bad guys and spitting them back out as projectiles (which is still an option), Yoshi can now also swallow them whole. Doing so will cause him to lay an egg. Yoshi’s eggs will then trail behind him everywhere he goes. These eggs can be used as projectile weapons. When using one, players are able to take aim at enemies or various switches/blocks. Mastering the art of throwing eggs is an essential part of the gameplay. Of course, there are also various power-ups available to Yoshi. Finding and eating these will grant a number of new abilities. A big part of the fun is experimenting with different abilities and seeing what works best in different situations.

As seen in prior entries of the Mario series, there’s also a number of optional goals in each level that players can shoot for; collecting red coins, playing mini games, etc. All of this helps add value and replayability to an already great game. 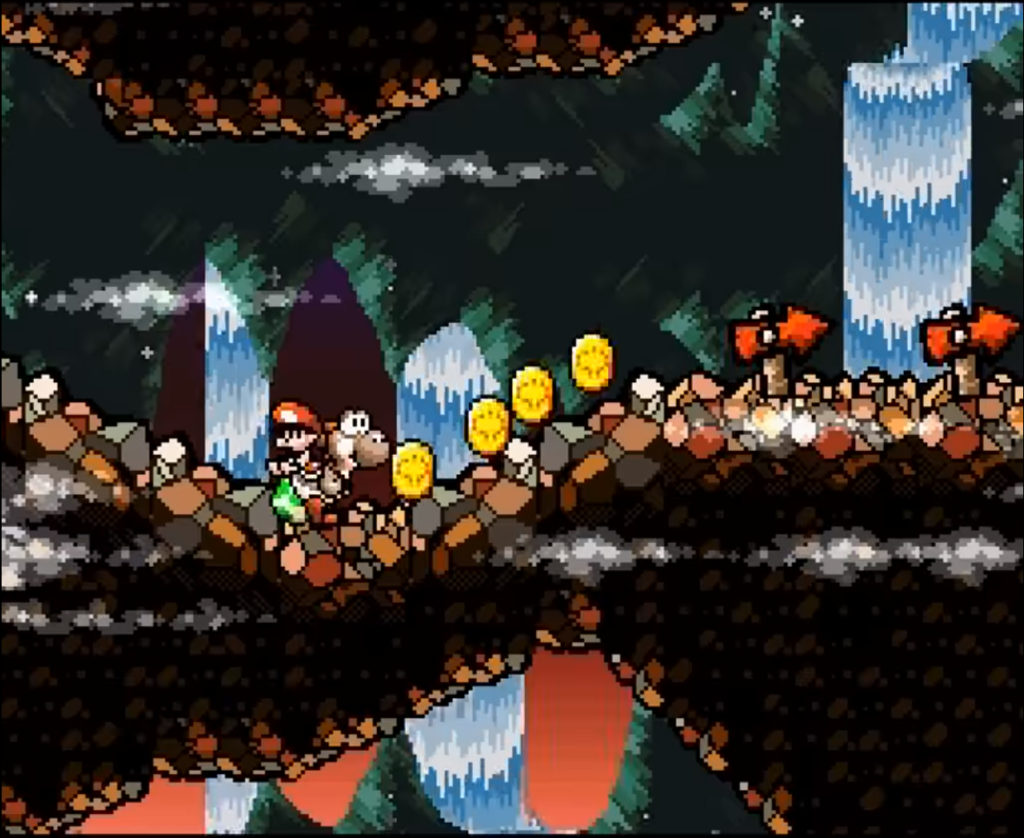 One thing that really stands out about Yoshi’s Island is the art direction. In a time when games were striving to be more photo-realistic, Nintendo opted to go for the extreme opposite. The art work for each level was hand-drawn on paper, then replicated digitally to give the game its unique “bedtime storybook” look. Early reviews of the game saw some people turned off by this choice. But many players, myself included, found this to give the game a unique and original feel.

For many, Yoshi’s Island is a game that went largely unnoticed. It simply came out too late in the life-cycle of SNES. As a result, it simply flew under the radar for many gamers. Trust me, I was one. While, I knew about the game’s existence, I personally never had very much hands on experience with it until the release of the SNES Classic. Once I finally got my hands on this game, I was in awe at just what a wonderful experience I had missed out on. Yoshi’s Island is truly a first-class game. It is one of the very best platformers I’ve ever had the pleasure of playing. If you have never experienced this game, you owe it yourself to see what you’ve been missing. Of course, that is assuming you can get your hands on an SNES Classic. Who knows, maybe when Nintendo expands the Switch Online service to include SNES titles, we will be fortunate enough to see this as one of the options. 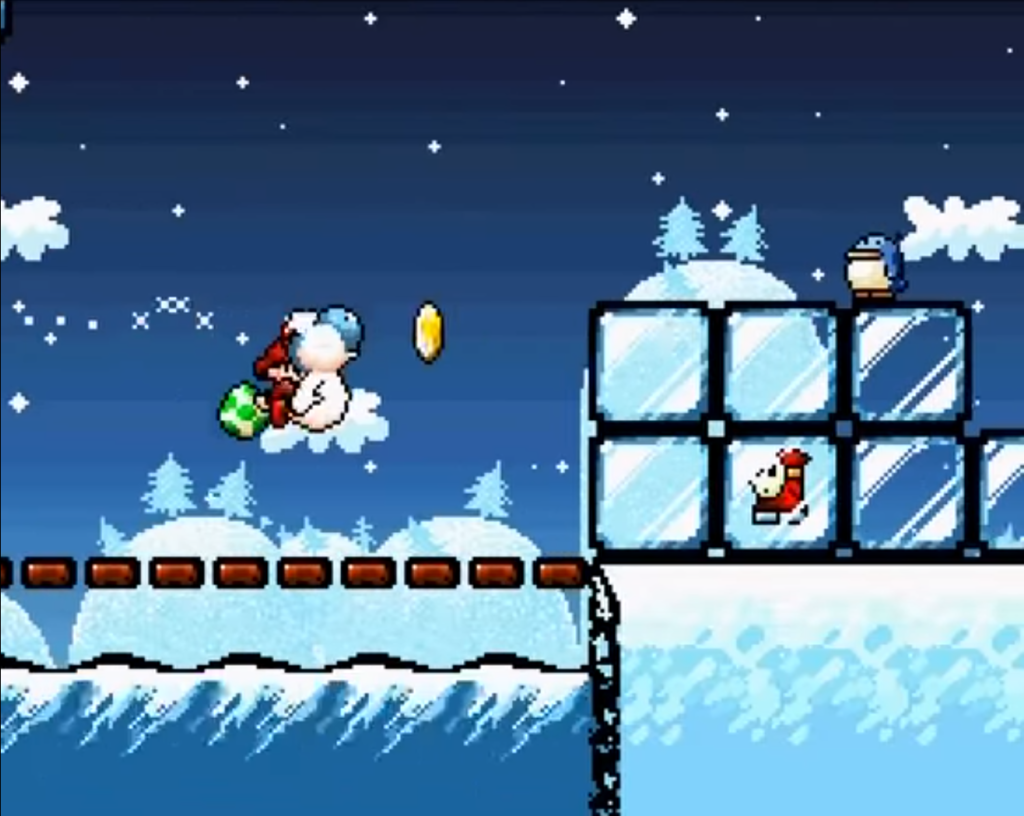 Difficulty: Medium –  The difficulty in this title is very different than what many gamers are used to. If you take your time and practice patience, it’s not very difficult to complete the game’s main objective. For the most part, Yoshi is invincible. Yes, he will die if he falls in lava or pits. But he is immune to enemy damage. This is why I say that being patient and not rushing blindly into danger makes this game a little less tougher than some. That being said, certain aspects of Yoshi’s Island can also be quite challenging. If you’re the type of player that likes to complete all of the optional objectives for example, then you’re going to be in for a much higher degree of difficulty than someone just looking to clear the game.

Story: The story behind Yoshi’s Island is cute and appropriate for the type of game that is it. It provides the basic set up, without taking itself too seriously.

Originality: In a time when platform games had pretty much run their course, Nintendo managed to pull a few new tricks out of their sleeve. Even though the gameplay will seem familiar to nearly everyone, there’s enough new and unique ideas packed into this title that it still manages to provide a fresh experience.

Soundtrack: While not as iconic as most of the other Mario games, Yoshi’s Island is host to some pretty timeless and memorable music. The “Flower Garden” song is a perfect example of video game music done right.

Fun: For me, this game is a blast. It’s jammed pack full of engaging gameplay with a colorful and entertaining atmosphere. This is one that you can enjoy with your friends or family and everyone will have a good time.

Graphics: As I said before, the graphics in Yoshi’s Island are colorful and unique. The hand-drawn style may seem a bit odd at first, but after playing for a bit you quickly learn to appreciate just how beautiful the game is.

Playcontrol: I’ve only played this game on an SNES style controller, but in that regard everything seemed spot-on perfect. If you’re unable to get your hands on an old SNES or the SNES Classic and you’re playing this via homebrew emulation, your experience may vary greatly depending on the controller.

Value: At the time of this writing, the original version of Yoshi’s Island is not available digitally. Finding a physical copy will usually cost you around $30.00, which is actually a pretty good price for such a fantastic game. Currently, the only official way to play the game on any sort of modern system is via the Super NES Classic, which is no longer in production.

Overall score (1-100): 95 – Super Mario World 2: Yoshi’s Island is a shining example of what a good platform game should be. It’s both familiar, yet original. It’s rich and complex, yet also simple to master. This game is the perfect showcase for what made the SNES such a great system. If you can manage to obtain a copy of this classic, you should definitely give it your attention.