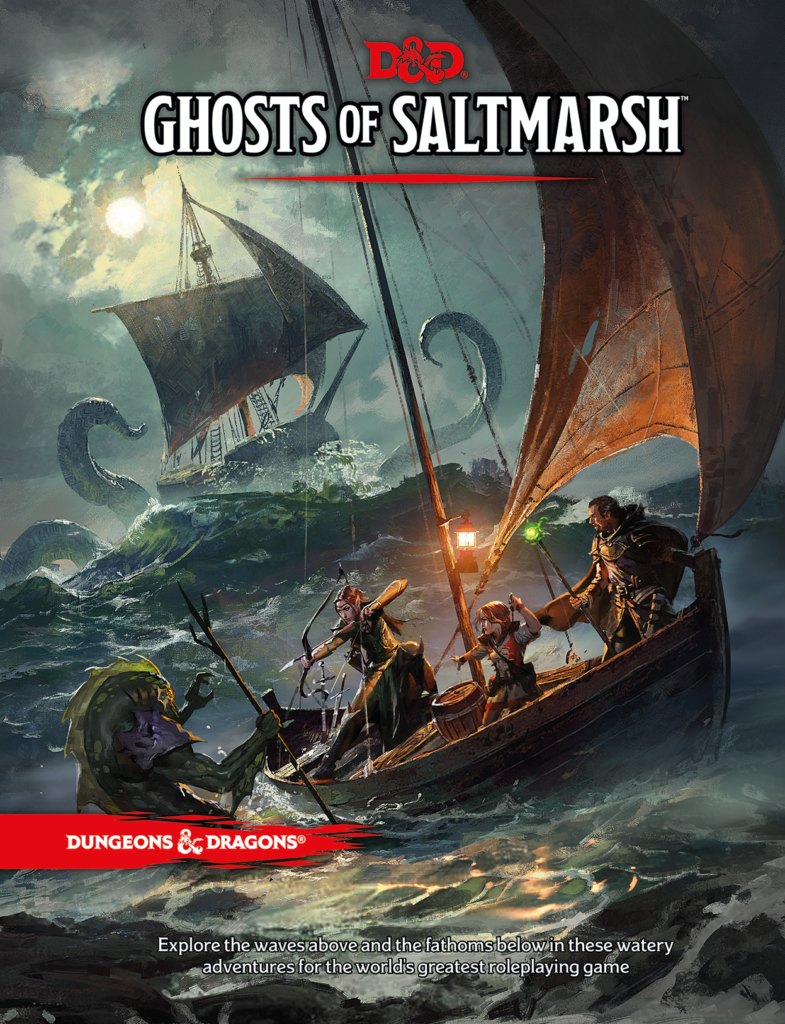 All has been silent on the D&D front for the last few months. So far in 2019, we’ve only had one real official release, and that was merely a revamp of the 5th Edition Starter Set. The good news is, all of that is about to change. Now that the month of June is upon us, the floodgates have been opened. This month we have a brand new collection of adventures, a campaign book, and even a brand new “Essentials Kit” that seems to be some kind of replacement for the old Starter Set. Of these three releases, it is the adventure book, Ghosts of Saltmarsh that finally hit the shelves. This is the book I’ll be talking about today.

Ghosts of Saltmarsh is a collection of classic Dungeons & Dragons adventures that have been updated for Fifth Edition. In this way, it is very similar to Tales from the Yawning Portal. Personally, I think this is fantastic. The book is assembled in a way that links these seven adventures together, making them into one big campaign. Of course, it is easy enough for a DM to simply pluck one out of the book and run it as a standalone or even use it in an existing campaign if they so choose.

There are a total of seven adventures included in this book. They are designed for players between levels 1-12. All of them are high-seas themed adventures based around the port city of Saltmarsh. Now, if you’re an old school D&D player, you probably know that Saltmarsh is a location from the World of Greyhawk campaign setting. That’s right, Ghost of Saltmarsh has officially introduced Greyhawk to Fifth Edition D&D! It seems that WotC has finally taken the leap away from Forgotten Realms exclusivity.

This book contains the following modules:

Salvage Operation, Isle of the Abbey, Tammeraut’s Fate, The Styes  – A collection of sea-fearing adventures from the pages of Dungeon magazine

Along with the adventure modules included in this book, Ghosts of Saltmarsh also includes a detailed introduction to the city of Saltmarsh, and expanded rules for sea-based ships. The latter should prove useful to nearly any DM.

I’m personally a big fan of high-seas style gameplay. One of my favorite memories of First Edition D&D was playing in a pirate-themed campaign. So for me, this book is a welcome addition to my collection. For others, I can see how this release may not seem particularity valuable of the surface. Regardless, it’s a fine collection that is certainly worthy of your consideration.

Take a quick look at the titles featured in #NintendoDirect | #E32021! What are you looking forward to playing?

Catch up on all the announcements here: https://www.nintendo.com/e3/

Find the idea of approaching a 35 year old franchise a bit daunting but want to try out Metroid Dread this October?

I've put together a guide for which games you need to play to catch up, along with places you can (officially) play it.

Nvidia is dropping support for Windows 7 and 8.1 - https://mspoweruser.com/nvidia-is-dropping-support-for-windows-7-and-8/