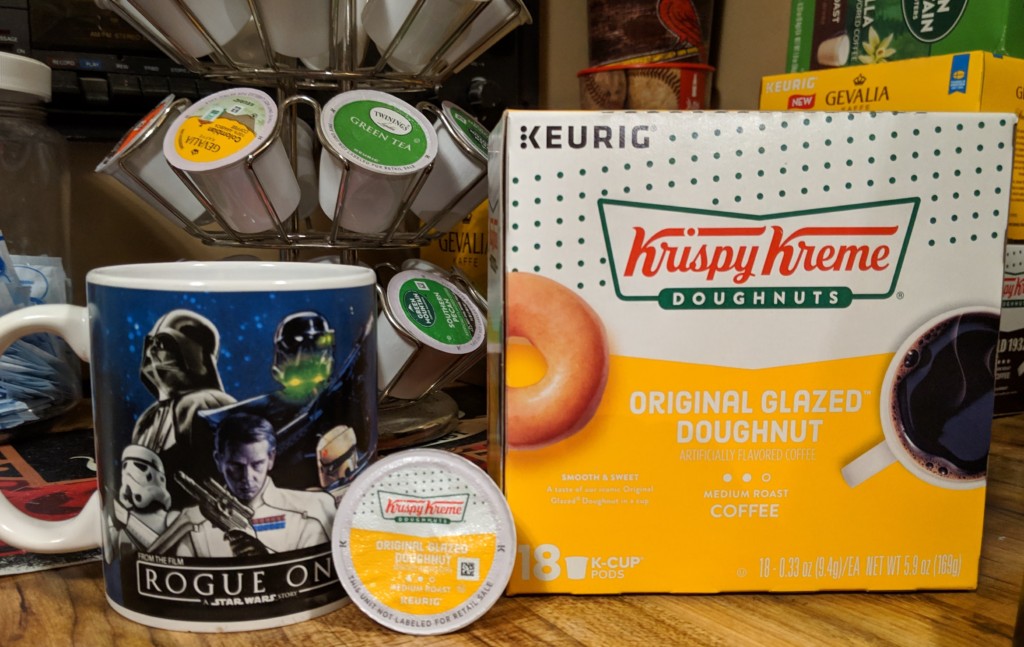 Lately, I’ve been putting in a lot of hours of retro gaming. I know I’ve been promising to start my Game Cube/PS2 era reviews for a while now, but things always seem to come up or my head always gets flooded with a ton of new ideas, that keeps pushing those reviews to the backburner. For example, my latest obsession has been arcade-style fighting games. To help fuel me through these marathon sessions, I’ve discovered a new K-Cup variety; Krispy Kreme – Original Glazed Donut.

A little over a year ago, I posted a review for Krispy Kreme’s “Smooth” blend. This was your standard light roasted coffee – pretty good overall, but it didn’t really stand out among the competition. To be honest, house coffees like Krispy Kreme’s “Smooth” are a dime a dozen. Sure, a few big donut shops have really made a name for themselves when it comes to coffee. But, when people think of Krispy Kreme, they mostly think of their donuts, not their coffee. That’s why when I saw an offering from Krispy Kreme, that supposedly tastes like their infamous glazed donuts, I knew I had to give it a try.

Original Glazed Donut is a medium roast coffee with healthy dose of “glazed donut” flavor. The flavor is sweet and sugary – not unlike the flaky white glaze on a real Krispy Kreme donut. So, I have to give Krispy Kreme points for accuracy; The flavor is indeed similar to one of their famous donuts. However, like so many other flavored coffees on the market, it carries a pretty grimacing aftertaste. For me, it actually ruins the experience. It just tastes too “phoney”.

Don’t misunderstand. I’ve had way worse coffees. But there’s absolutely nothing here that gets me excited and makes me crave another cup. Now, perhaps I’m a bit of a snob when it comes to these sorts of things. I know that plenty of people would probably think this coffee is out of this world. I’m just not one of those people.

For this flavor, I have to give Krispy Kreme points for their noble effort, but in the end it just falls flat on its back.

Would buy again?:  Probably not. The flavor is pleasant at first. But it’s followed by a very artificial-like aftertaste that just turns me off.