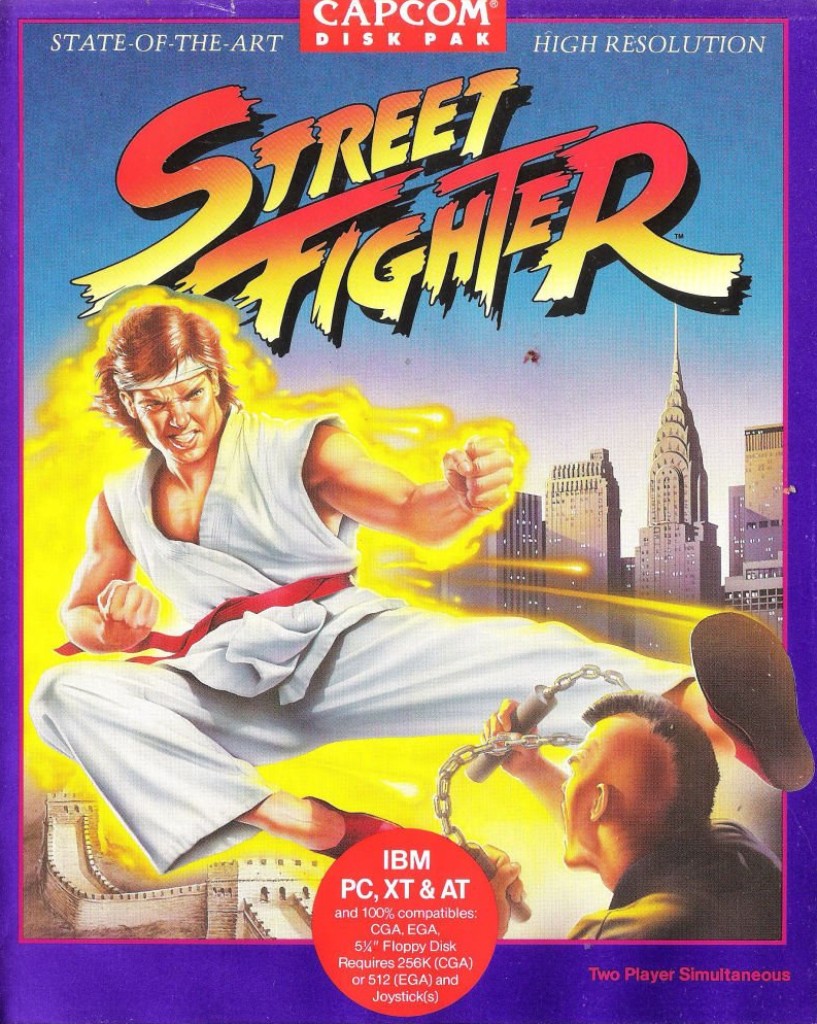 As I was making my way through my backlog to select games for these Retro Rewind reviews, I had a revelation of sorts. You see, years ago when I originally played through the bulk of my SNES collection, there was a title really deserved attention, but one I decided to set aside for a later date. That game is Street Fighter II. When it comes to retro gaming, Street Fighter II is a nothing short of a classic. But it is a game that’s best experienced with other players, not against the computer. At the time, I felt that my oldest son was a bit too young for game containing such a high level of violence. So, I made the decision to revisit the it further down the road. Well, it just so happens that while I’m now going back and talking about some of these 16-bit era games, an anniversary collection of Street Fighter games has also hit the shelves. Now, at the age of fifteen, I feel my son is more than old enough for these types of games. So, with a second player at my disposal, there’s never been a better time to take a look at this classic series. To start, we’ll save the review of Street Fighter II for another day and actually go back to very beginning, the original arcade classic; Street Fighter.

If you’re reading this site, its highly unlikely that you’d be unfamiliar with the Street Fighter series. But just in case, I’ll take a moment to provide some background info. The Street Fighter arcade series encompasses a number of highly popular titles. The first game in the series, Street Fighter is often hailed as one of the first brawler-style beat-em-up arcade games. In reality, other games like Double Dragon and Renegade actually hit the scene first. But where these games focused largely on stage-by-stage progression against a large number of enemies, Street Fighter took a different approach with one-on-one combat. 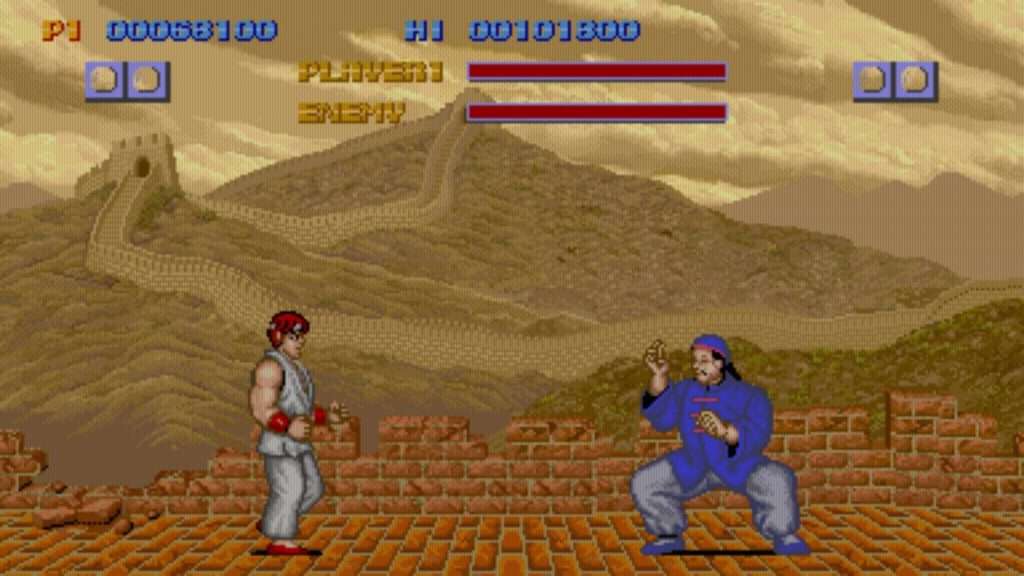 In Street Fighter, you play as Ryu, a contestant in a world-wide martial arts tournament. The game starts with the player choosing a region in which to compete first (USA or Japan). The initial opponents you face are determined by your starting region. Once you’ve defeated all of other contestants in that area, you move on to the next. Throughout the game there are a total of ten opponents:

For the most part, Street Fighter is a single player arcade game. However, at any time, another person is able to pop a quarter in the machine and challenge Player One. At that point, the current match stops and the second player takes control of a character named Ken. For all intents and purposes, Ken and Ryu are exactly the same in terms of gameplay. The only difference between them is the character design. If Player Two happens to win the match, he is able to pick up the game where the first player left off. 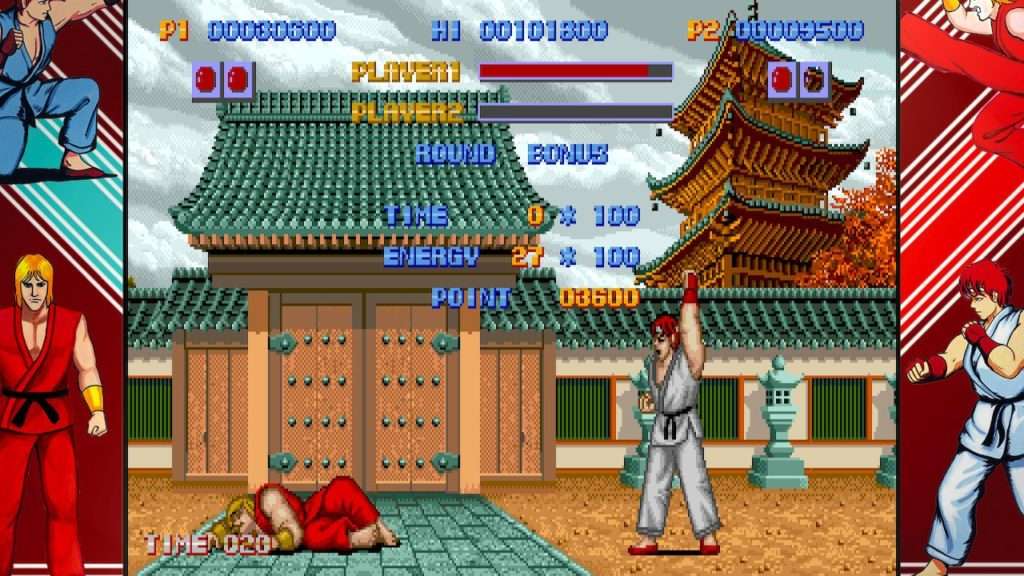 Aside from being a tournament-style game. Street Fighter differs from earlier fighting games in its control scheme as well. Instead of being controlled with a stick and one or two buttons, the majority of Street Fighter cabinets actually sported a total of six different buttons. Three of these for kicks and three for punches (weak, medium, and strong). Note: a handful of “deluxe” machines did come equipped with two pressure-sensitive buttons instead. However, the buttons on these machines were prone to malfunction and therefore not very popular.

Street Fighter is mostly remembered in its arcade cabinet form. In its day, it was ported to PC and a few other secondary systems. But it never saw a proper home console release until its inclusion in the Street Fighter 30th Anniversary Collection. So for many players, myself included, this was the first time we’ve been able to play the game at home. The Anniversary Collection is available on a number of platforms. For the most part, it doesn’t matter which system you go with, the games look and work the same. The only caveat to this is the Nintendo Switch version which has an extra game mode for Street Fighter II. For this reason, I chose to go with the Switch release when playing through the collection.

Being able to play the original Street Fighter at home is welcome indeed. But it is not without its issues – namely, the playcontrol. This is a game that designed specifically for the original arcade cabinet. The movement controls feel stiff and foreign on modern controllers. And believe me, I tried both the Joy Cons and Pro Controller. The attack buttons work just fine, but my gripe lies with the character movement. It just doesn’t feel as responsive as I remember it being in the arcades. This makes executing specials moves very difficult. This complaint isn’t Switch exclusive either. For testing purposes, I even rented a copy of the game on PS4 – same issue. Bummer.

Despite this one complaint, I don’t really have anything bad to say about the home version of Street Fighter. At its time, it was pretty revolutionary, at least initially. But it was quickly surpassed by a number of other similar titles. When put up against any other entry in the series, it easily claims last place. That being said, I still have to give it credit for being unique enough to launch an entire franchise. Sadly, it just doesn’t hold up very well today. Regardless, it’s reproduced very faithfully as part of the Anniversary Collection.

The Anniversary Collection does a nearly flawless job of presenting Street Fighter just as it was in the arcade – including the ability for a second player to butt into the action. But it also provide the additional perk of allowing two players to participate in “versus mode”. This mode provide a simple way for two players to face off against each other while also allowing for some basic match customization. Players are able to select which level to battle in, adjust the timer, etc. The anniversary collection also includes a number of screen filters to help reproduce that classic arcade experience. 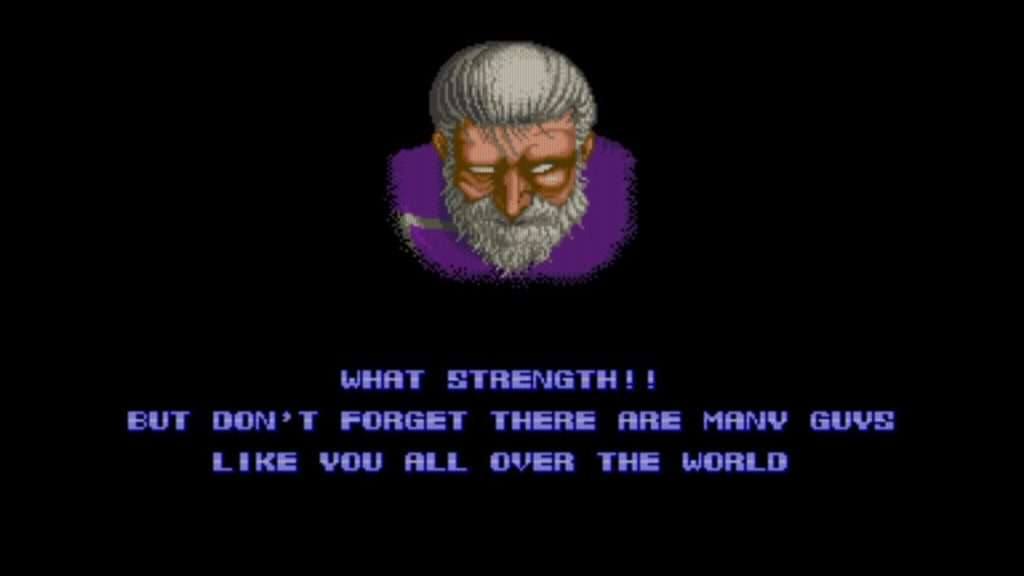 Difficulty: Hard –  Most games made for arcade play are difficult. This is by design, as their goal was to entice the player to part with as many quarters as possible. Being a port of the arcade version means that the difficulty level here is unchanged. New players are almost certain to have a tough go of things the first few times they play. However, with a little persistence, you’ll eventually get the hang of things. In theory, there’s a strategy to beating each opponent. But to be completely honest, the large majority of fights tend to be very similar. For me, I didn’t experience a major swing in difficulty until the final two battles. They were downright brutal when compared to the rest of the game (which is no walk in the park either).

Story: There’s not much of a backstory for Street Fighter. It’s simply a series of bouts in a world-wide martial arts tournament. Reading the manual will give you a little insight into the backstory of each character (which I found a little interesting). But overall, the plot is pretty bare – which for this type of game, is entirely acceptable.

Originality: While fighting games were nothing new, Street Fighter did an excellent job at flipping the script by introducing the whole tournament concept and giving the genre a competitive edge. This game also deserves credit for introducing the concept of “secret” combo moves. Players are able to execute special moves by hitting certain button combinations. But these secret combos are not spelled out anywhere in the game – players uncovered this strictly by trial and error. To me, this is a stroke of genius.

Soundtrack: Each character has their own unique theme song. Some are better than others, but none of them are particularly memorable.

Fun: At the time this game was released, it was quite unique and served as a great way to kill some time with a friend at the local arcade. These days, the game feels very dated and slow-paced compared to other similar titles.

Graphics: In it’s day, Street Fighter featured top of the line graphics. Even today, thirty years later, the game still looks pretty good. The characters are colorful and well designed, the backgrounds are detailed and enjoyable to look at. Good stuff.

Playcontrol: This game was designed for it’s own arcade hardware and it just doesn’t feel right when using modern controllers. The action is stiff and clunky. I’ve seen third-party controllers that are laid out like arcade cabinets. Perhaps playing with this type of hardware is the trick, I don’t know. I feel like the developers could have spent a little more time fine-tuning the game to home console controllers. As it stands, executing special moves with a standard controller is very hit or miss. Without a doubt, this is my biggest gripe with the home release of Street Fighter.

Value: Street Fighter is available as part of the Street Fighter 30th Anniversary Collection which retails for anywhere between $20-$40, depending on the system. Alone, this game is nowhere near worth that price. But, when looking at the bundle as a whole, it’s an overall good deal.

Overall score (1-100): 55 – If I’m being honest, Street Fighter is not really that good of a game by itself. I mean, I can think of way worse games. But there’s just nothing about it that really stands out when compared to the competition. That being said, it was the catalyst for what became a classic franchise. To me, the game serves its purpose as more of a curiosity for those who want to see how the Street Fighter series got its start.