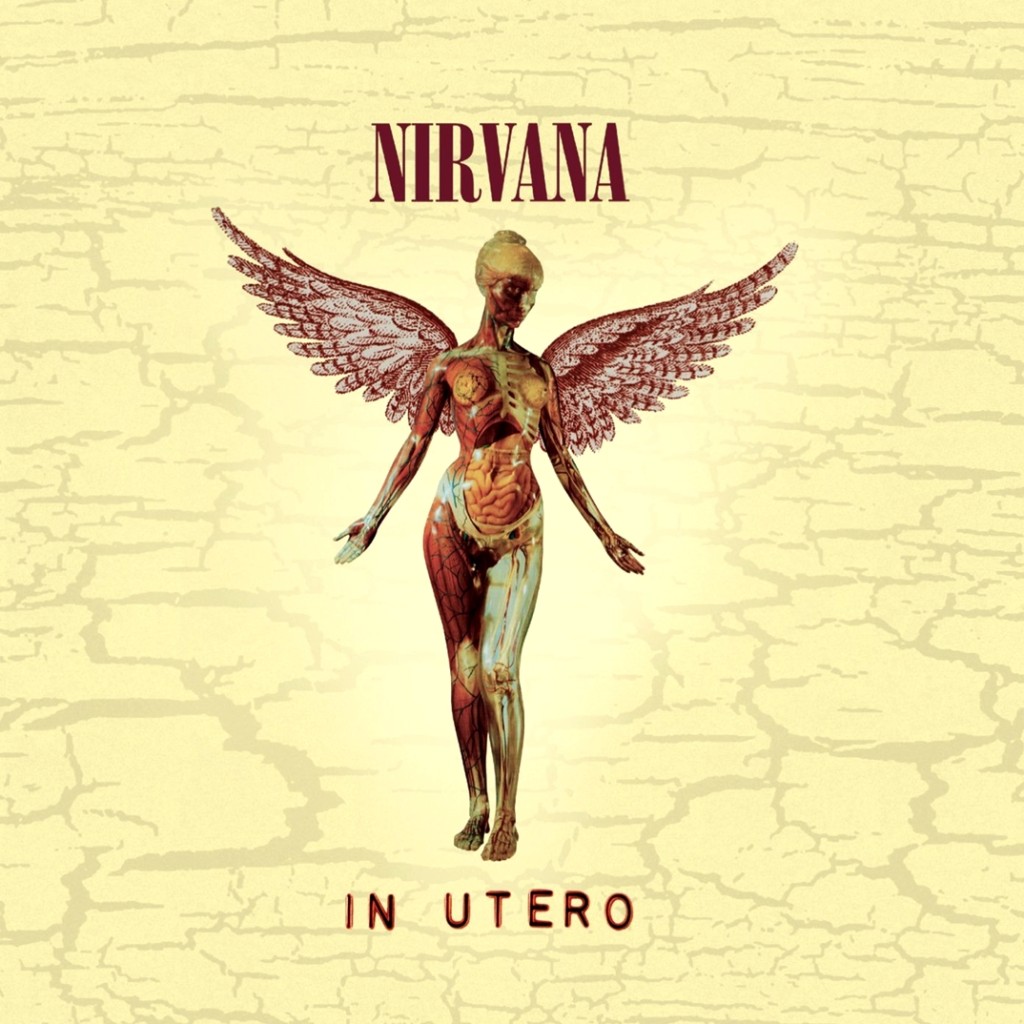 Even though I don’t post them as much as I’d like, my Record Shop articles are part of an ongoing series. Of the seven Record Shop posts made thus far, three of them have been for Nirvana albums. As a young musician, Nirvana was undeniably a huge source of inspiration. At the height of their popularity, Nirvana appealed to me in a way that few bands were able to match. From a technical standpoint, their music was often simplistic. It wasn’t hard, even as a rookie musician, to pick up a guitar and play along to any given Nirvana track.  Their music rocked. It made me tap my foot and bang my head. Nine times out of ten, I had no idea what message Kurt Cobain and the rest of the band was trying to convey (if any). But that didn’t matter. It was just good music. Today, I’m going to revisit their final album, the legendary In Utero.

Like most, I first discovered Nirvana through the release of their second album, Nevermind. It’s a record that has gone down in history as one of the most important rock albums ever written. From there, I discovered their earlier stuff, their B-sides, outtakes, etc. So, by the time In Utero hit the stores, I was a full fledged fan. Even though it was technically their fourth major label release, for many, In Utero is often looked at like a sophomore album. Everyone wanted to see if Nirvana was going to be able to top the success of their last release.

Even before its debut, the buzz surrounding In Utero was huge. Nirvana frontman Kurt Cobain had seen a number of life changes in the years since Nevermind was released. His life had become a real-world rags-to-riches story. On top that, he had married and become a father. People speculated on just what effect these life changes may make to his music. Aside from that, it had become known that Nirvana had hired somewhat of a renegade producer for the album, Steve Albini. An engineer well known for his minimalist sound production. With all this buzz in the media, the album had already become legendary before it even saw the light of day.

The day it was released, I remember rushing to the record store with a buddy after school. My friend’s car didn’t have a CD player, so despite having the album in my hands, I had to wait until I got home to listen. Once I made it to my room, there I sat; on my bedside with the CD in my stereo system. The linear notes for the album included a recommended setting for the bass and treble. I had never seen that in an album before, but I followed the instructions dutifully. I wanted to experience this record exactly as the band intended. Once everything was set, I listened to the album all the way through, from start to finish – without interruption.  So, like that day, let’s take another listen.

1: Serve The Servants – The album starts off with the sound of Dave Grohl counting off with his drumsticks. This is followed by a rather raunchy-sounding crescendo. What follows is a loose-sounding sludge of guitars and Cobain’s distinct gravelly whine. There is no doubt this is Nirvana. But the song does have a new funky and raw quality to it. It flies in the face of everything that was Nevermind. This is a song that is often overlooked by casual fans, and I’m sure many would consider it to be a poor starter for such an anticipated album. But to me, it’s actually a great summary of Nirvana’s unique style. Even if you’re not moved at first listen, this is one that likely to grow on you over time.

2: Scentless Apprentice – Next up, we have a track that is a return-to-form of sorts. Many qualities of this song echo some of Nirvana’s earliest compositions. It’s a drum-heavy wall of noise. It’s gritty and sloppy – but airtight at the same time. I love it. This is actually one of my favorite tracks on the album.

3: Heart-Shaped Box – Here we have the first single for the record. This is admittedly the most radio-friendly track on the album. This song follows Nirvana’s time tested formula for success: slow creeping verses, followed by a loud and in-your-face chorus. The lyrics and cryptic and odd. It gave fans exactly what they wanted, but in a way they never expected.

4: Rape Me – The first time I heard the opening notes for this song I immediately thought of “Smells Like Teen Spirit”. Of course, opening notes aside, the rest of this track sounds nothing at all like it. For me, “Rape Me” is the perfect example of the “Nirvana Sound”. If someone were to ask me to summarize Nirvana in one track, this would be the song I present. Controversial title aside, this is probably the best track on the record.

5: Frances Farmer Will Have Her Revenge on Seattle – This song has a very fresh quality about it. It doesn’t really sound like anything the band has done before. For some reason, a lot of people overlook this track. But I personally love it. For those unfamiliar, Frances Farmer was an actress from Seattle who, later in life, became famous for her struggles with mental illness. What she has to do with this song is really anyone’s guess. But it still rocks!

6: Dumb – To me, this song feels like something that belonged on Nevermind. Even though it has an entirely different production value to it, it just sounds like something from that era. Friends of mine have argued against this opinion for years. But, I don’t know. It’s just my observation. Personally, I find this track a bit lackluster. It’s not a favorite of mine.

7: Very Ape – This track is short and sweet. Again, this sounds like something that would have fit in well on their previous record.

8: Milk It – This is a weird one. But, I rather like it. To me, this song really defines the overall sound of In Utero. The general vibe of this tune is exactly what I pictured as the next step of evolution for Nirvana.

9: Pennyroyal Tea – This is probably my second favorite on the album. Acoustic guitar for the verses, and a ripping buzz for the chorus. Good stuff. Perhaps Cobain’s finest composition, musically speaking.

10: Radio Friendly Unit Shifter – Like “Milk It”, this track also defines the overall In Utero sound. I really like this song. But for many, this is considered a throwaway track.

11: Tourette’s – If there is actually a throwaway track on the album, this is it. The song is a cacophony of noise and screaming for a minute and a half. But even then, it still grooves.

12: All Apologies – The album ends with a mellow track. This is everyone’s favorite. I like it, but I think there are more interesting songs on the album. That being said, it actually a very good finisher. It puts a good bookend on what has been a roller coaster of a record.

So, what’s the verdict? Well. In Utero is a a decent album. I enjoy it and it certainly earns its place in the annals of rock history. But, if we’re being honest, had it not been Nirvana’s last record I don’t think it would be nearly as memorable. If Nirvana had made it long enough to release a follow up, I’d be willing to wager that the public opinion on In Utero would have been drastically different.  Don’t get me wrong. I’m not putting this record down. It’s amazing. But, it is also feels a bit awkward. To me, it sounds more like a stepping stone than a capstone. Nirvana is a band that hadn’t yet reached maturity. Following that analogy, In Utero feels more like a soundtrack for a moody teenager than a farewell record.

When listening to albums, I always suggest enjoying them on a nice Hi-Fi stereo system or on a portable device with a good pair of headphones. The original release of In Utero sounds just fine in my opinion. But some listeners might be tempted with the more modern “Anniversary Edition”. Like so many remasters, this release cranks up the volume to a point that, to me, makes the album nearly un-listenable. So, buyer beware. As is often the case, the “remaster” actually ends up being the inferior product. However, the Anniversary Edition does include a few interesting tidbits. For example, it includes a disc that features a completely remixed edition of the album from the original producer. As a long-term fan of the record, I find this extremely interesting and well worth the attention.