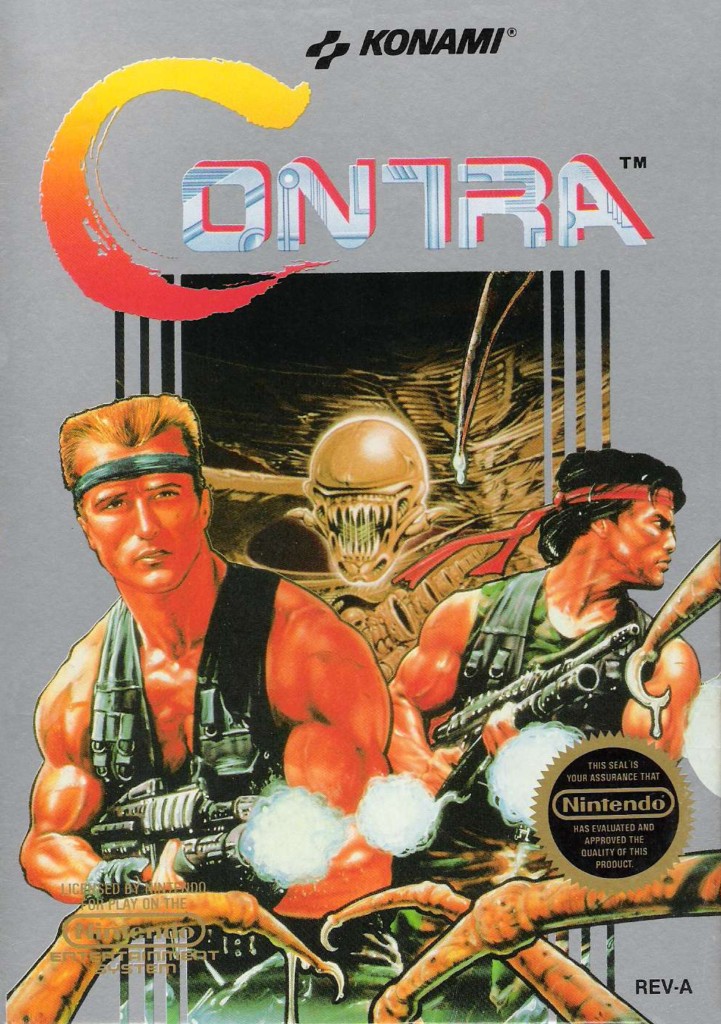 “Up Up Down Down Left Right Left Right B A” – The Konami Code. If you’re a gamer, either young or old, there’s a very good chance that you’ve heard of it. When playing a game developed by Konami, entering this sequence on the gamepad usually results in some type of boon. The code originated with the game Gradius. But it was made famous by another Konami title; Contra. Most of the time using this cheat will grant the player extra lives (as it does with Contra), other times it unlocks power-ups or other desirable side-effects. On a few rare occasions, it has even had negative results (a sort of punishment for cheating gamers). Yes, the Konami Code is technically a cheat. But for Contra, a game famous for its high degree of difficulty, using the code was almost a requirement.

For most readers of this site, Contra is a game that needs no introduction. But in case it somehow slipped under your radar, allow me to provide some detail.

Contra (or Probotector – as it is known in Europe) is primarily a side-scrolling shooter. Even though it was originally released as an arcade title, it is the NES port of Contra that earned legendary status with gamers worldwide. In the game, the player controls a soldier (Bill or Lance) as they blast their way through a jungle occupied by the evil Red Falcon organization. As the game progresses, it is learned that Red Falcon is not just an ordinary terrorist group. In fact, they are controlled by an alien entity – one hell bent on enslaving the planet. It is up to Bill and Lance to rid the world of this alien filth!

For most players in the west, the NES version of the Contra is only release of the game they are familiar with. But it’s actually not the original version of the game! Contra started as an arcade title. The coin-op version of the game is technologically superior to the NES port. But for many, myself included, the NES release is actually the superior version. Despite not being as pretty, the NES port feel more polished and complete. If we’re being honest, the Japanese Famicom release of the game is even better. It offers some additional cutscenes and slightly better graphics. But for the most part, the gameplay between the JP and US release are almost identical. 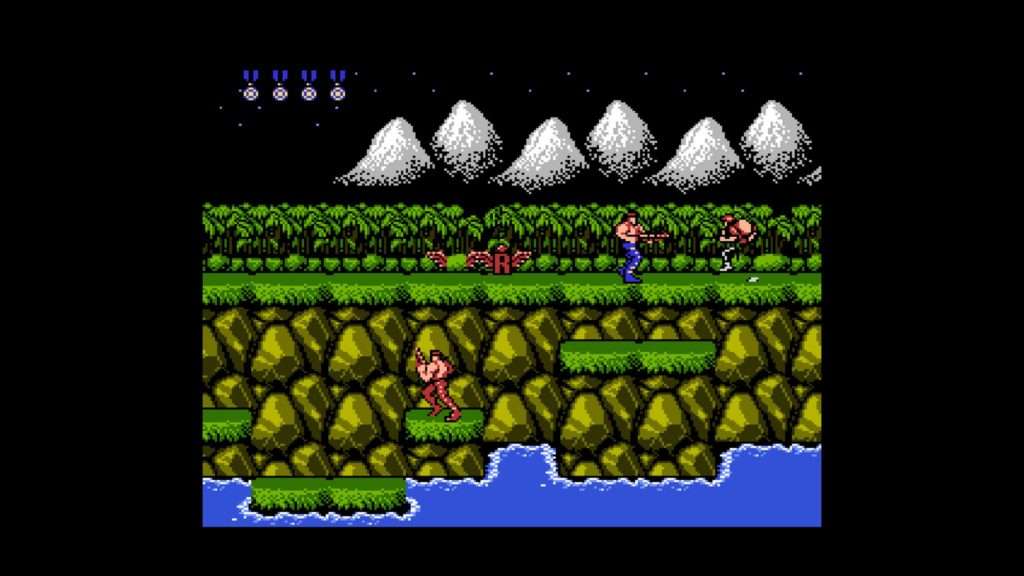 Like many side-scrolling shooters of the era, players must dodge enemy attacks and navigate various platforms/environmental hazards. Enemies come in a variety of forms; humanoid soldiers, armored turrets, alien attackers, etc. Players do not have a health bar, so if they come in contact with an enemy, environmental hazard, or an enemy projectile, they lose a life and respawn.

By default, the game provides players with only three lives. Completing a single level of the game with only three lives is extremely challenging. Of course, as you play and learn the placement and pattern of enemy attacks, things get easier – especially in the earlier levels. But as the game progresses, it does become incredibly difficult to clear a stage with just three lives. When you’ve run out of lives, you will have the option to either end the game or try again. Choosing “continue” to try again will restart the current level from the beginning.

The difficulty level in Contra is largely why the Konami Code became so popular. In Contra, using the code on the title screen provides players with a total of thirty lives instead of just three.  Having thirty lives at your disposal, certainly makes the game considerably easier, especially when you factor in the ability to continue. But even then, it’s no walk in the park. 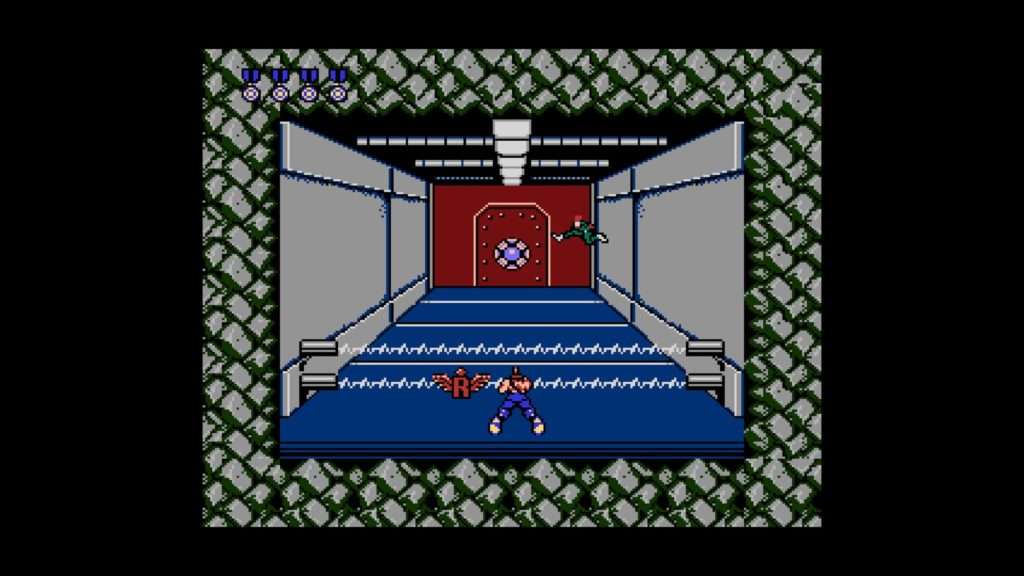 While the majority of the game is presented in a side-scrolling format. There are two levels that are laid out in a semi-3D angle. These levels focus more on memorizing enemy attack patterns and timing than the high-speed action that the rest of the game provides. They make for a really nice change-of-pace. Regardless of the way they are presented, each stage in the game provides its own unique setting and challenges.

Contra is a game that can be played alone. But it was really designed with two-player co-op in mind. Playing side-by-side with a friend of family member is really the way to go. When I was younger, you almost never fired up Contra without a friend by your side. For the sake of this playthrough, I introduced my oldest son to the game and we played it from start to finish. It was nice to be able to share this experience with him. I hope he passes it on and plays it with his little brother, or maybe one day with his own children.

For me, Contra holds a feeling of nostalgia that ranks right up there with only a small handful of other classic NES titles. I spent countless hours playing this game as a child. Now, with the release of the Contra Anniversary Collection, it’s easy to play this game on nearly any platform. This collections contains the arcade release, US, JP, and even the EU versions of the game. If you’ve never experienced this classic, there’s never been an easier way. 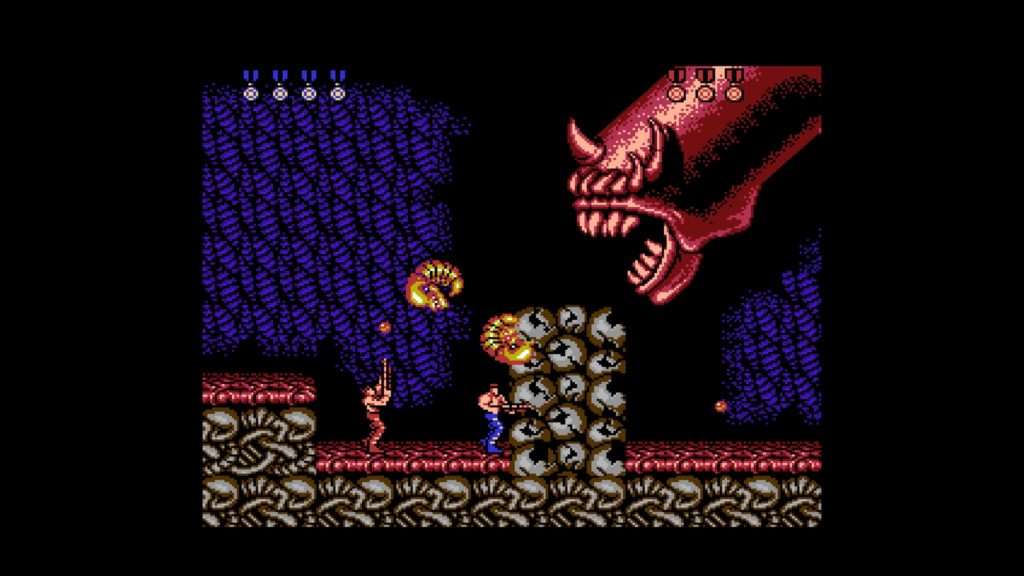 Difficulty: Very Hard –  For most gamers, beating Contra without the use of the Konami Code is nothing more than a pipe-dream. The onslaught of enemies and bullets, combined with the game’s tendency to respawn your character into immediate peril is just too much when limited to only three lives. When using the cheat code to gain thirty lives instead of three, and then combining it the ability to “continue” the difficulty level eases up considerably. But even then, the game is still tough as nails.

Story: The backstory for Contra is sufficient for a game of this type. But, it’s largely absent from the game itself. Players interested in the story behind Contra will have to turn to the instruction manual for details.

Originality: Side-scrolling shooters were nothing new at the time Contra was released. But what really made the game stand out in the crowd was the co-op multiplayer aspect. At the time of its release co-op games on the NES were very few in number. But when pitted against the game’s high degree of difficulty, many players found themselves relying on their friends to make it the finish line. This where the game truly shines and also makes for one of it’s most original and memorable aspects.

Soundtrack: Contra features an incredibly catchy soundtrack. The entire game is filled with earworms. The music fits the fast pace of the game and does a great job at enhancing the whole overall experience.

Fun: Contra can be a very frustrating title, especially for a single player. But, when paired up with a friend, it makes for a really good time.  In fact, the best way to get the most out of the game is to play with a friend. That’s where the fun really starts.

Graphics: Contra is certainly not the best looking game on the NES. The characters leave a bit to be desired, but the level design and background visuals are very well done.

Playcontrol: This game plays best on the original NES controller. When playing it on the original hardware, everything feels spot-on. Modern controllers sometimes feel a little “off”, or at least require a period of adjustment for players used to the old NES layout. At least, this seems to be the case with the Anniversary Collection on the PS4. That being said, even though it didn’t feel as natural as it does on the NES, it didn’t take long to get the feel for the game with the new layout.

Value: Today, Contra is available as part of the Contra Anniversary Collection. This collection includes a total of seven games from the Contra series, plus their international counterparts – all of $20.00. With this in mind, it is certainly worth your money.

Overall score (1-100): 85 – Contra is a classic title from the 8-bit era. It’s not without its flaws, but it remains a must-play title nonetheless. It works best when played as a two-player game. The extreme difficulty level can be a turn-off for some. But then again, just remember that the Konami Code exists for a reason. Who cares if it’s “cheating”? You’re playing to have fun with a friend. So, brush the stigma aside and enter that code with pride. It’s time to grab a buddy and shoot some aliens!