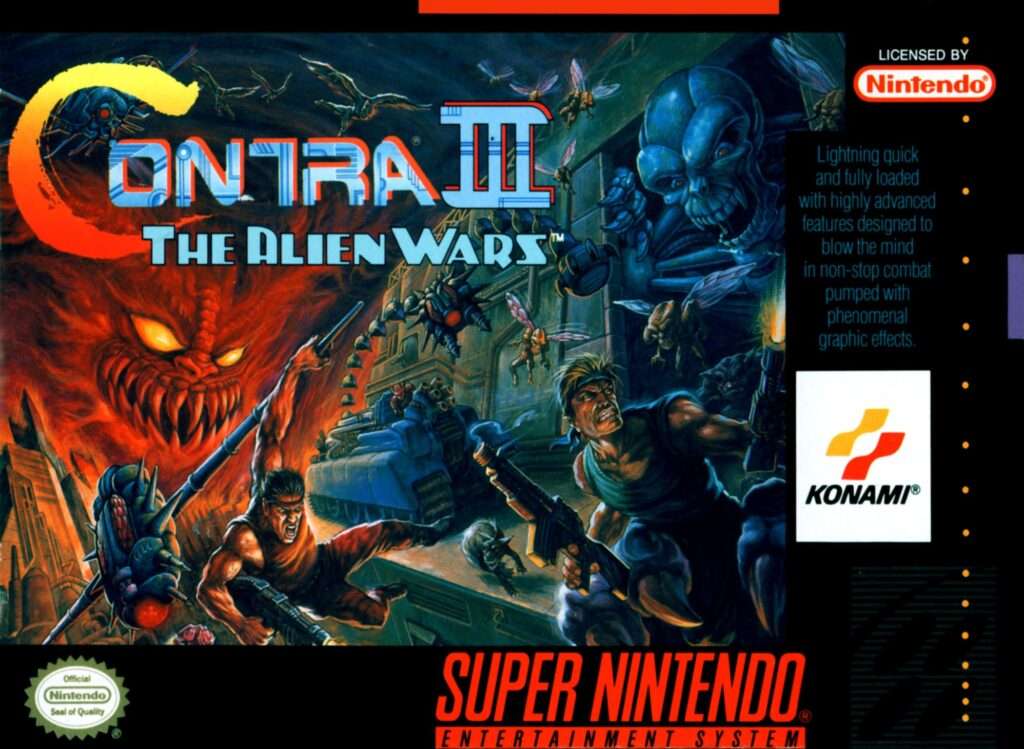 Still grinding away at the Contra Anniversary Collection, we are brought to the third entry in the series; Contra III – The Alien Wars.

This game marks a very interesting chapter in the franchise. While the overall gameplay will feel familiar to fans of the series, there’s a number of major changes that really turn the whole Contra experience on its head. This is likely due to the introduction of a new game director; Nobuya Nakazato. Nakazato feared that by following the same basic “run and gun” formula in every game, fans would soon grow tired of the series. However, he also knew that making really drastic changes would also have a detrimental effect. His solution was to attempt to modernize the series, while still respecting the roots that made Contra such a big success. To do so, he kept a number of tried-and-true aspects. Namely, the co-operative two-player option and the basic concept of a side-scrolling shooter. But in turn, he decided to up the pace of the game and make the environments more interactive. He stated that his main goal was to give the action in Contra a “the over-the-top feel of a low-budget action movie”. As someone who recently played the game from start to finish, I can tell you that he achieved that very thing.

To start with, the storyline for Contra III is about what you’d expect in a B-grade action movie. It’s as simple as “the aliens are back for round three”. That’s right, despite being beaten two times prior, the aliens are back with another invasion attempt. Stepping up to stop them are none-other than our heroes from the first two games, Bill and Lance… well, sort of. According to the Japanese instruction manual, Bill and Lance are back again. But for some unknown reason, the North American localization team decided to change them to two entirely new characters named Jimbo and Sully. Why? Who knows. But regardless, it’s really unimportant at this point. All you need to know is that the alien forces are back and it’s up to two dudes to kick some alien butt. 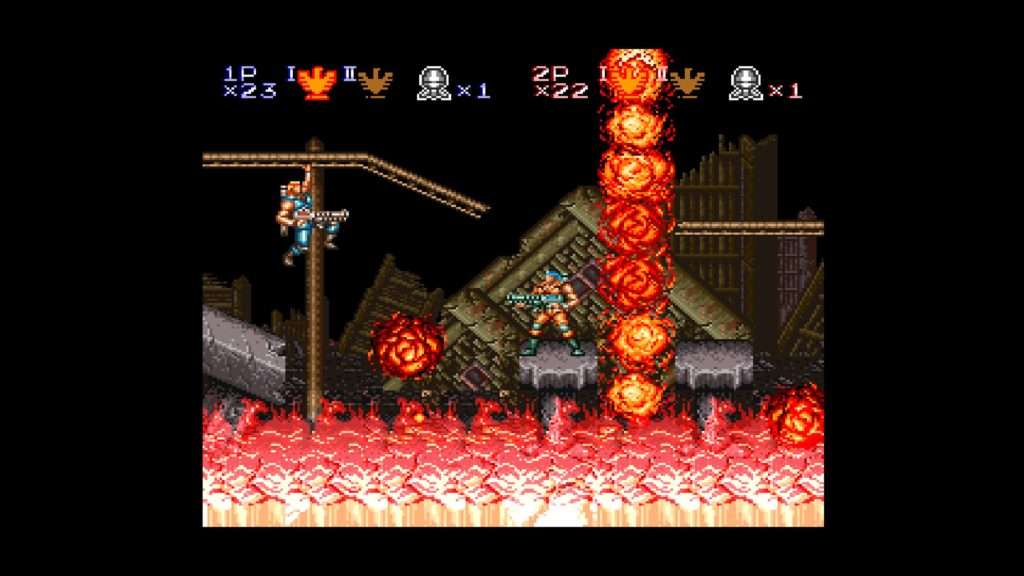 Being a Super Nintendo title, this entry in the Contra series is a massive graphical upgrade from its predecessors. Everything visually about the game is better. More colors, Mode 7 graphical effects, you name it. Not only that, but the soundtrack has received quite a boost as well in terms of quality. Sadly, the composition doesn’t hold a candle to the original game, in my opinion. But, the audio quality is some of the best that the SNES has to offer.

When it comes to gameplay, this is where you’ll find the biggest difference. Contra III takes the original formula for the series and puts it into hyper-mode. Everything about the game is fast-paced and extreme. The majority of the game still focuses on side-scrolling action. But there are a few overhead levels mixed in for variety. And yes, there’s still boss battles at the end of each level. In fact, there’s often even mid-level mini-bosses. But this time even the run-of-the-mill enemies can pose an extreme challenge for the player. With that statement in mind, let me be up front and tell you that calling Contra III a challenging game is an understatement. This game is nothing short of brutal. From the start screen, you can choose to play one of three difficulty levels (Easy, Normal, or Hard). If we’re being honest, even the “easy” option is enough to make you want to throw your controller across the room. It’s also important to note that if you want to see the true ending to the game, you actually have to choose to play on hard mode. But again, unless you are a super-human gaming machine or an absolute sadist, playing this game on the hardest setting is not going to be an enjoyable experience.

In an almost laughable attempt to make things seem easier, along with the selectable difficulty levels, players can choose to start the game with up to seven lives. Honestly, this is of little help for casual players. Now, if you’re thinking of simply using the legendary Konami Code to increase your chances of winning, think again. The North American release of Contra III has no cheat codes whatsoever. That luxury is only available to Japanese players. 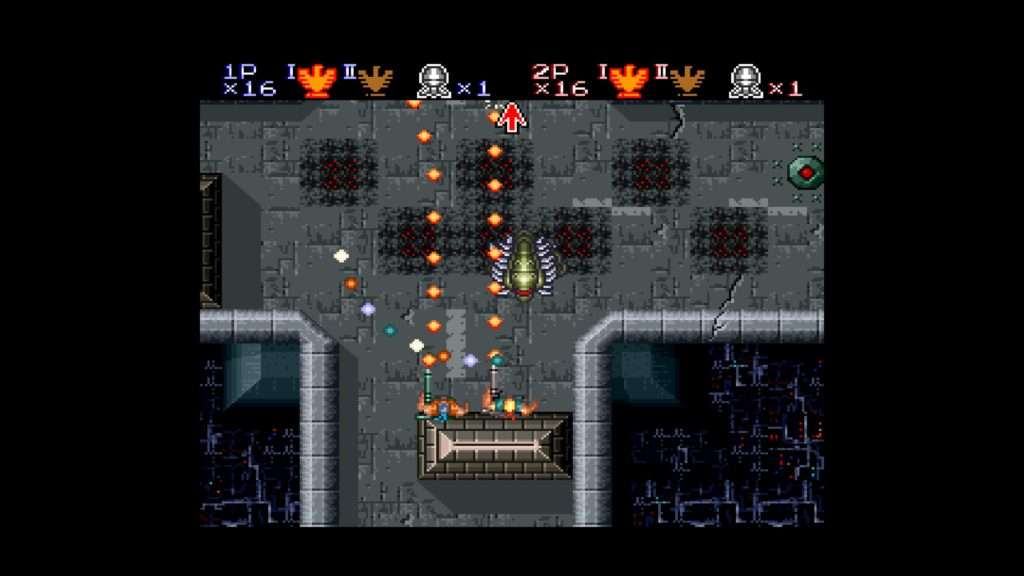 You may think I’m exaggerating when I talk about the difficulty of this game. But I’m not. Contra III is probably one of the most extremely difficult games I have ever encountered. To put it into perspective, one of the boss battles in this game involves attacking a flying robot. From behind you, just off screen, is a helicopter that continuously launches missiles at the enemy. (Of course, they never actually connect with him. So it’s up to you to blast him into oblivion). Now keep in mind, you’re attacking this boss in mid-air. So, to prevent yourself from falling to your death, you have to jump and grapple the missiles I just mentioned while blasting away at the boss with your gun. The trick is, the missiles explode after a few seconds. So you have to keep jumping from missile to missile before they explode, all while dodging the enemy attacks and managing to fire your weapon at the boss. The whole thing is extremely fast-paced and unforgiving.

In fact, when playing in co-operative mode with my son, we switched to the Japanese version just so we could use the thirty-lives cheat code that’s only available on the JP-version of the game. Even then, we found the game to be too chaotic to complete together. It was simply too difficult to organize an effective strategy between the two of us. Only by setting aside an entire day off and playing alone in a quiet house was I able to complete the game from start to finish. And even then, I admit to having to take advantage of the save state feature from the Anniversary Collection to save my game at the beginning of each level.

It’s easy to dismiss a game of this difficulty as unworthy of attention. And I suppose for most casual gamers, that might be the case. But it’s important to remember that the Contra series is challenging on purpose. These games are not intended to be a walk in the park. Each entry in the series attempts to outdo the previous title in terms of challenge and gameplay. Despite being unforgiving, Contra III is not impossible. It’s a game designed for those with a desire to conquer, even if the path to victory is a punishing one. Learning the layout of each level, mastering the various gameplay elements, and being willing to fail over and over are all part of the journey. With this in mind, Contra III is masterpiece, even if it is an acquired taste. 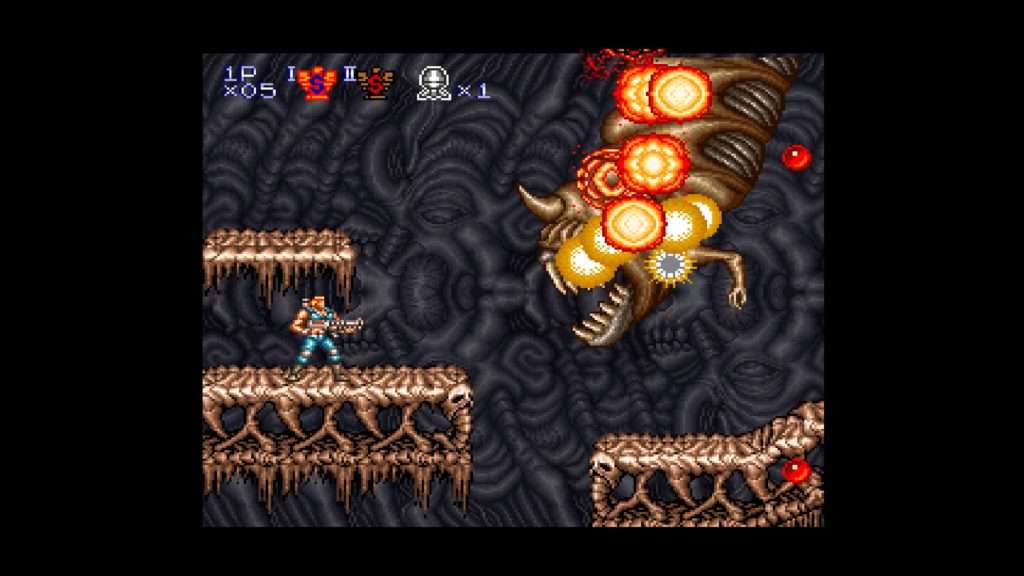 Difficulty: Very Hard –  I mentioned it in the main review above, but I’ll say it again. Contra III is extremely hard. I don’t think simply telling you that manages to get the point across. It’s that tough. Despite offering three difficulty levels, this game is going to the chew you up and spit you out. Period.

Story: There’s really not much of a story here. Alien invaders come back to Earth for a third time and it’s up to our heroes to stop them. It’s the exact scenario seen in the first two Contra titles.

Originality: Even though it follows the “rail shooter” formula of the first two games, there’s plenty of new mechanics to keep this entry from feeling stale. Contra III is a great example of evolution within a series.

Soundtrack: Contra III makes the most of the SNES audio system. The soundtrack is very well done, but admittedly it is not particularly memorable.

Fun: This game is really aimed at a particularly niche audience. Most casual players are very likely to be turned off by the difficulty level. But for those gamers that really enjoy the sense of satisfaction that can come from conquering a brutal game like Contra III, this game is going to be a blast.

Graphics: Contra III is best looking entry in the series thus far. Of course, this is largely due to the leap from NES to SNES. The sprites are colorful and detailed and the Mode 7 background effects are very well done.

Playcontrol: I never played Contra III on the SNES. So the Contra Anniversary Collection is my first experience with the game. Like other titles in this anthology, I strongly suspect that this game, plays best on the original SNES controller. But, unlike Contra and Super C, the playcontrol felt very natural to me on the PS4 controller. I can’t attest to how well it might perform on other systems.

Value: Today, Contra III is available as part of the Contra Anniversary Collection. This collection includes a total of seven games from the Contra series, plus their international counterparts – all for $20.00. With this in mind, it is certainly worth the money.

Overall score (1-100): 75 – In its own right, Contra III is an extremely well done game. It showcases the power of the SNES and helps to evolve the Contra series. The biggest downside here is the high degree of difficulty. While being challenging is not necessarily a bad thing, it’s going to be a major turn off for a large number of players.