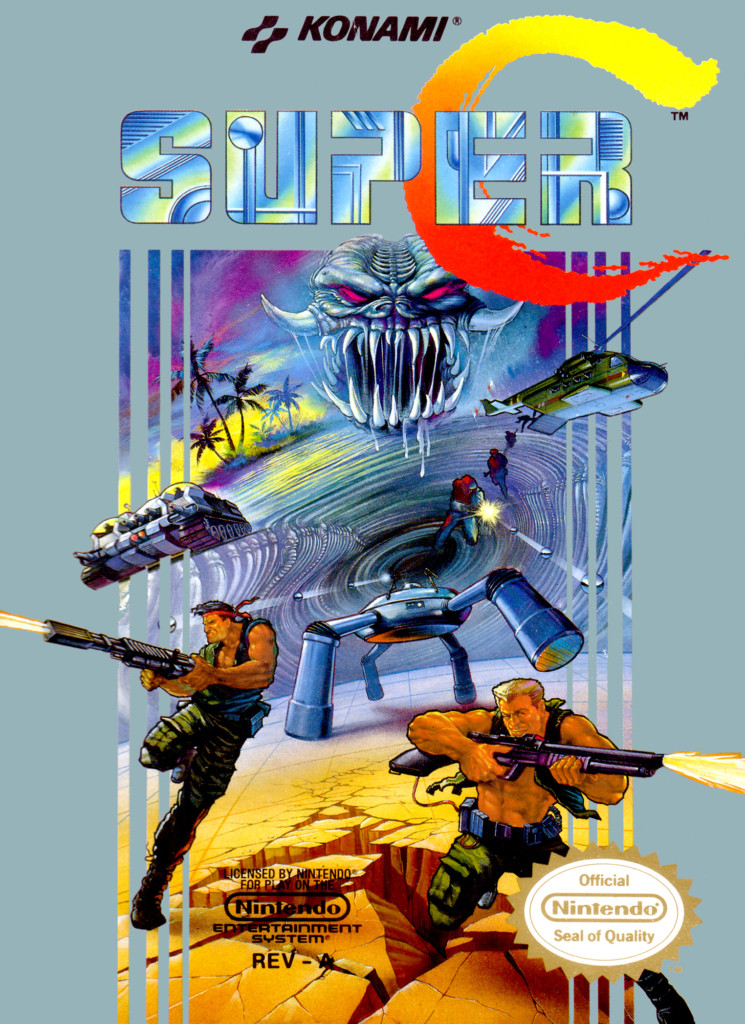 I posted a couple months ago about the release of the Contra Anniversary Collection. Since that time, my oldest son and I have been playing through these games together. Last month, I posted my review of the original Contra, a true classic from the NES era. It was a game I enjoyed immensely as a kid. Well, next up on the list is the sequel to Contra. For its original Japanese release, this game was called: Super Contra – The Alien Strikes Back. But for some strange reason, it was renamed to simply Super C for the North American release. Personally, I think the original title is much cooler. But whatever, Super C is it.

This game is set approximately one year after the events from original Contra. Despite their victory against Red Falcon, Bill and Lance find themselves once again ordered to do battle with alien invaders. This time, the aliens have overtaken a military installation. Our heroes must fight their way through the highly secured facility and eliminate the alien threat. 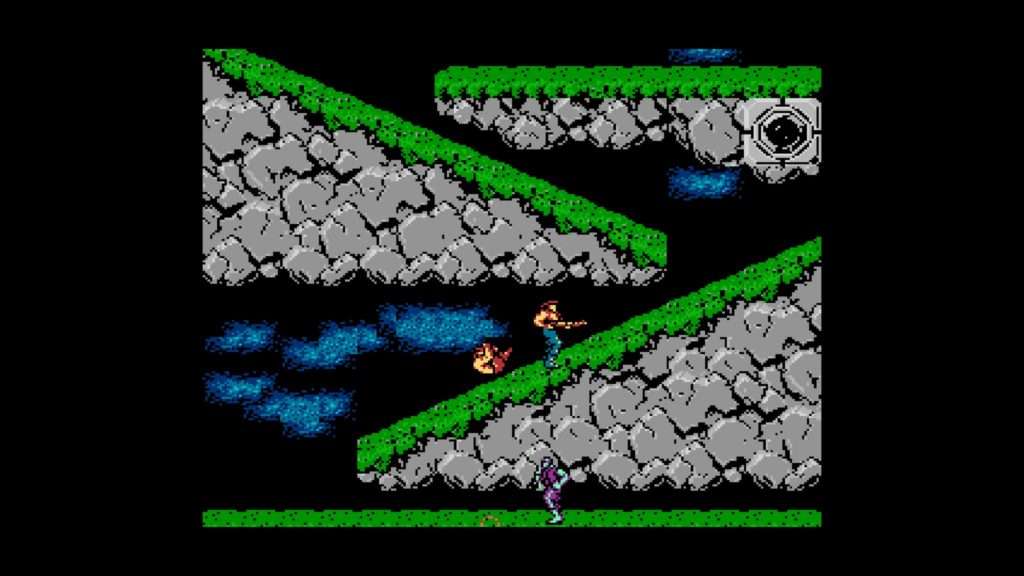 If you are a fan of Contra, than Super C is worthy of your attention. Super C is very similar to Contra in almost every way. This is apparent from the moment you start the game. The graphics and overall art direction are nearly identical to the original title. The same can be said about the gameplay. Like its predecessor, Super C is an action platformer. It works just like the first entry in the series. If you know how to play Contra, you already know how to play Super C.

But the similarity does not end with just the visuals and gameplay. Again, just like Contra, this game is known for its extreme difficulty. In fact, I daresay it’s even harder than the original game. This is mostly due to the fact the the classic “Konami code” is not present in Super C. That’s right, there’s no more thirty extra lives tucked away in the game’s coding. Thankfully, there is still a cheat code that can be entered. It’s just not the classic “UUDDLRLR”, and this time around it only grants the players ten lives. To make matters worse, in Super C, when you run out of lives, you can only continue a total of three times before you see the dreaded “game over”.   BRUTAL.

Despite being very similar in most respects, there are few things that set Super C apart from what came before. The most obvious difference between the two titles is Super C‘s second level. In the original Contra, there were a couple of stages that were played in a pseudo-3D “behind the character perspective”. This time, the game changes things up a bit by giving players a birds-eye-view for the game’s second stage. While this is not exactly revolutionary, it is a nice change of pace and helps keeps the game interesting. 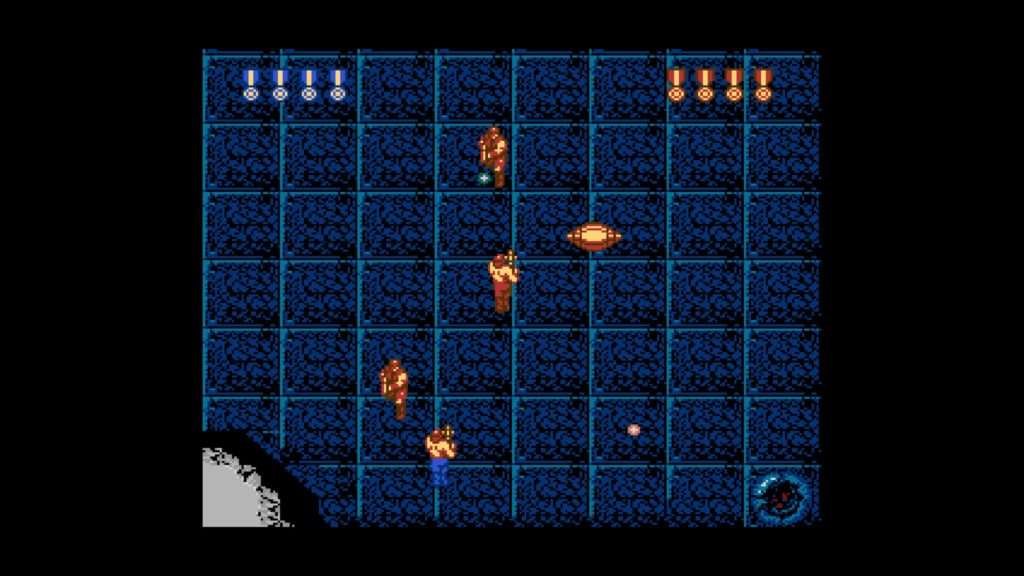 Even though I was big fan of the original Contra growing up. This is actually the first time I ever played through the sequel. But, knowing the history of the series, I knew that experiencing this game with two-players was the way to go. Considering the extreme difficulty of this title, it turns out that I was right. Unless you’re one of these crazy “no-hit speedrun” super gamers, playing Super C with two players is almost a must.

Even with the cheat code enabled, I will admit that my son and I had to resort to using the save-state feature included in the Contra Anniversary Collection to get through the last level of the game. But, I say that with no shame. Despite its difficulty, we had a blast playing this game together. And having to cheese our way through the last little bit only added to that experience.

In the end, Super C turns out to be exactly what some sequels need to be. A solid continuation of a great game. It seems Konami took the old wisdom of “if it ain’t broke, don’t fix it” to heart. This time around, it works great. 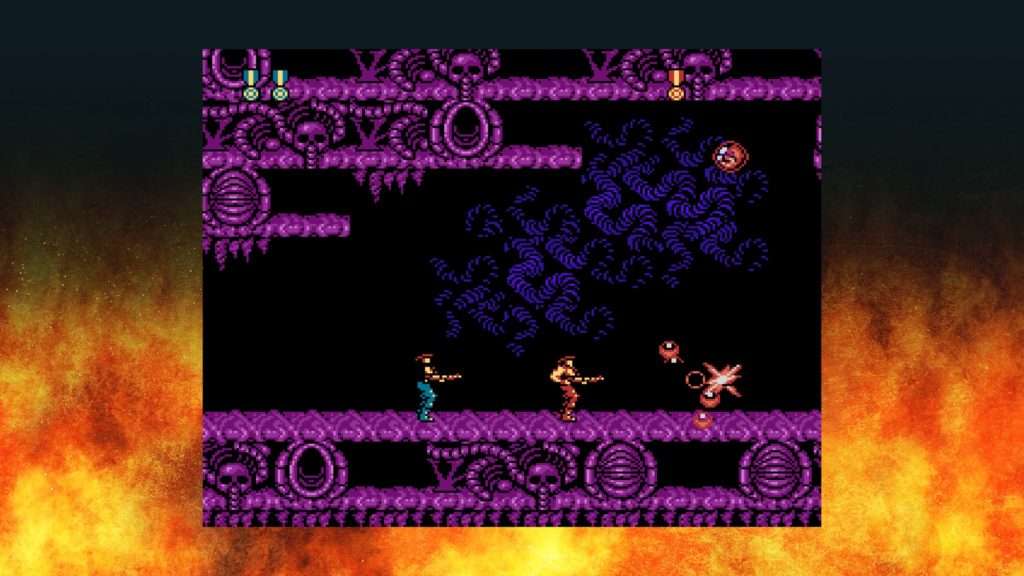 Difficulty: Very Hard –  I’ve seen some people claim that Super C is actually easier than the original Contra. Personally, I found the opposite to be true. Both games share a fairly similar level of difficulty. But overall, I feel Super C is just a little more unforgiving. And I say that without considering the cheat code nerf. It’s just sadistically difficult. But, it’s not impossible, and practice does make perfect. But if you’re going to try to complete this game without using a cheat code, be prepared to practice a lot. You’ll need it.

Story: The storyline for this game is quite basic, as expected. But, they tried. In truth, games like these do not really need a strong backstory so it’s forgivable.

Originality: Super C is very much more of the same. But considering the “true sequel” nature of this game, that doesn’t really end up being a bad thing.

Soundtrack: Contra had a really great soundtrack. Sadly, the same cannot be said about Super C. Now, I’m not saying it’s terrible. But the music in this game is not nearly as memorable. The tunes here are fitting and do help drive the on-screen action. But I feel that the composers could have done a little better.

Fun: Super C can be a very frustrating title, especially for a single player. Teaming up with a friend is a must. Games like this really shine in co-op mode. My son and I had a ball playing this title, even though it was tough as nails.

Graphics: Super C borrows heavily from the Contra playbook. But if you look closely, there’s actually quite a few improvements. The stages are a bit more detailed and the overall art feels a tad more polished. Sadly, for a game this fast-paced, these subtle changes are not really noticeable and often go overlooked.

Playcontrol: Even though I never played Super C on the original hardware, I strongly suspect that this game, like Contra, plays best on the original NES controller. Playing this on a modern controller felt a little “off” at times. At least, this seems to be the case with the Anniversary Collection on the PS4. That being said, even though it didn’t feel as natural as it might on the NES, it didn’t take long to get the feel for the game with the new layout.

Value: Today, Super C is available as part of the Contra Anniversary Collection. This collection includes a total of seven games from the Contra series, plus their international counterparts – all of $20.00. With this in mind, it is certainly worth your money.

Overall score (1-100): 60 – Super C is a decent game. It’s not bad, but it’s not particularly good either. While there is plenty to like about this title, there’s other games that seem to just do it better (namely Contra). That being said, if you’re a fan of Contra, this game is a must play. However, if you’re looking for a classic co-op retro experience, I’d have to recommend the original over Super C every time.