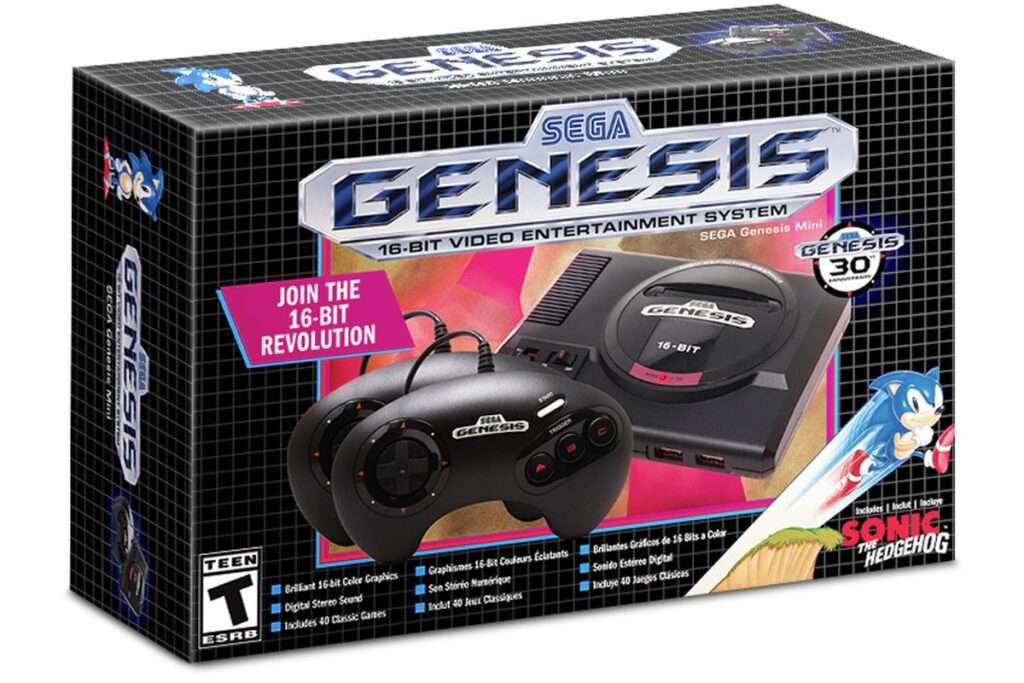 It is finally here, Sega’s first real entry into the retro-console arena, the Sega Genesis Mini. That’s right, after seeing the success of Nintendo’s NES and SNES minis, Sega decided to follow suit and crank out a retro-console of their own. Before seeing how it compares to what Nintendo has brought to the table, I want to take a moment to discuss the original Sega Genesis for those readers that might not be familiar with the console.

I suppose if we’re being honest, I’m actually one of those people. I never personally owned a Sega Genesis. Now, one of my best childhood friends did and the two of us spent a countless number of hours playing Genesis games. So I’m no stranger to the console. But, I didn’t have same daily hands-on experience with it as I did with Nintendo’s hardware of the day.

Like the SNES, the Genesis was a 16-bit machine. The graphics on both consoles were pretty much on par with each other most of the time. Occasionally, some games tended to look better on one console vs the other, but this varied wildly depending on the developer (Mortal Kombat is a great example of this). The biggest difference between the two consoles was not in processing power, but rather in the form of the controller. The SNES controller boasted a D-pad with four standard buttons and two shoulder buttons. Whereas the Genesis featured a slightly more ergonomic controller, but with only a D-pad and three buttons. At first, this sounds like a pretty big detriment – and in some games (Mortal Kombat and even Street Fighter II are great examples, as the arcade versions of these games relied on four or more buttons), it did require some serious jerryrigging by the development team. But in the end, most developers were able to adapt and the three button controller ended up working out just fine.

So, if generally speaking, both consoles stood on equal ground in terms of power, how did Nintendo end up winning the 16-bit consoles wars so decisively? The answer comes down to one thing, first party titles.

Nintendo is the undisputed king of first-party games. With franchises like Mario, Zelda, and Metroid in their pocket, it was difficult for Sega to compete. Sure, Sega had some popular franchises as well (Sonic, Shinobi, Phantasy Star, etc) but these games just didn’t have the same draw as Nintendo’s roster. Plus, once players started flocking to the SNES, so did third-party developers.

Sega tried to combat this by enticing third-party devs to create a number of Sega exclusive games, based on existing popular series. The hope was fans of these series would be tempted to buy a Genesis so they wouldn’t be missing out on these new and exciting entries into their favorite franchises. Konami was one developer that signed on to this plan with releases like Castlevania Bloodlines and Contra: Hard Corps.

This worked to a small degree. But in the end, Nintendo still ruled the day. Regardless, the Genesis was home to a handful of absolutely wonderful titles. For years, these games were difficult to obtain. Players had to sift through various bundles and collections just to find a few classic games worth playing. Now, with the release of the Sega Genesis Mini, a vast number of classic Genesis games are once again readily available.

The Genesis Mini comes preloaded with the following games:

That’s quite an impressive list! But, as any Gensis fan will admit, there are a few glaring omissions. But to be fair, Sega did an overall fine job of compiling games that really showcased the best the console has to offer.

One of the big reasons the NES and SNES minis are so popular has to do with the ease in which they can be hacked. This allows users to install ROMs for games that were not officially included on the console. Considering the Genesis Mini is very similar in design and runs on nearly identical hardware as both the NES and the SNES mini consoles, I’m certain it is only a matter of time before the same can be done with it.

When that day arrives, I’ll be certain to pick one up so I can finally dive into a number of these classic titles that I missed the first time around. Of course, if the Genesis mini remains largely ignored, it’s easy enough to run Genesis games on the other mini consoles already on the market. But, I’d much prefer to experience them on a real Sega controller.

So for now, the Genesis mini is a slightly tougher sell to the casual audience. But for those aging gamers who actually grew up with one of these consoles in their home, this is one retro console you won’t want to miss.

To date, I’ve only reviewed two Sega Genesis games on this blog: