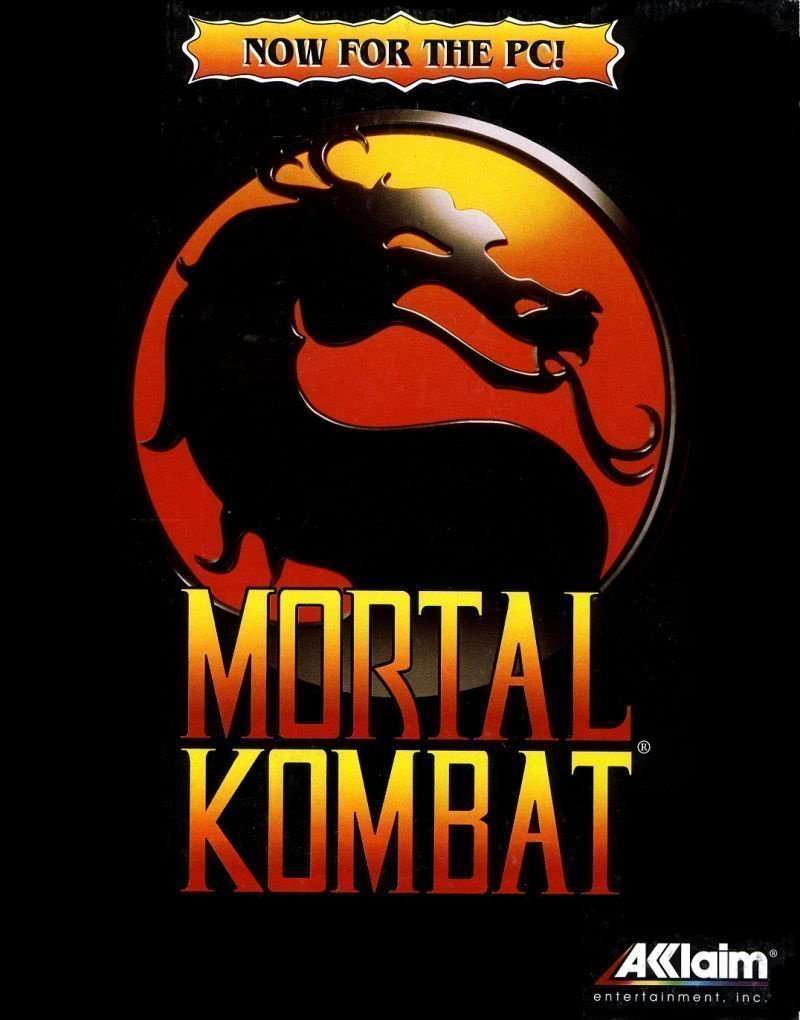 I wanted to take a break from Contra and change gears for a little bit. A few months ago, I posted reviews for two classic arcade brawlers. Of course, I’m talking about Street Fighter and Street Fighter II. The Street Fighter series is arguably the champion of the arcade fighting genre. But every champion has its challenger. And if any other fighting franchise can hold stake a claim as the number one contender, it would be Mortal Kombat.

Mortal Kombat is very similar to Street Fighter in a number of ways. First of all, it’s a tournament style one-on-one martial arts fighting game. A single player can enjoy the game by fighting against a roster of CPU controlled characters, or go head-to-head against a second player. When starting the game, each player can select a character to control. Each character has their own loose backstory and a number of unique special moves, including an (often gory) “finishing move”.

The storyline for Mortal Kombat may seem simplistic at first. But in reality, the lore behind the game is quite detailed. Essentially, there is a vast multiverse consisting of many different dimensions (or “realms”). Over the ages, countless realms have been conquered and merged with their neighbors. Now, only sixteen realms remain. Due to divine decree, only by defeating the greatest warriors of a realm in ten consecutive “Mortal Kombat” tournaments, can any of the remaining worlds be conquered. This game takes places in the Earthrealm, (aka: our planet, Earth). Having lost nine tournaments in a row to Goro, champion of The Outworld realm, and his master Shang Tsung, the events of this game will decide the fate of the Earthrealm once and for all.

When participating in the tournament, players are able to select a fighter from the following roster of contestants:

Liu Kang – A Shaolin monk who enters the tournament with the sole desire to prevent the destruction of the Earth.
Johnny Cage – An American martial artist and Hollywood action star. Having been dismissed as nothing more than an actor, he initially enters the tournament for a chance to show the world the legitimacy of his martial arts mastery.
Kano – Leader of the International Black Dragon crime cartel. Kano sneaks his way on the tournament island, hoping to loot treasure. When discovered, he is forced to compete.
Sonya Blade – An American special forces agent on the heels of Kano. She tracks him to the tournament, where she is also forced to compete or be killed.
Sub-Zero – A mysterious Ninja who is ordered by the leader of his clan to win the tournament and slay Shang Tsung.
Scorpion – A ninja assassin from an opposing clan. His past is shrouded in mystery, but he expresses open hostility towards Sub-Zero.
Raiden – One of the original gods of Earth. Invited to participate in the tournament by Shang Tsung himself, Raiden takes on a corporeal form in hopes to defend his world from destruction.

During the single player game, the player must defeat all of the other contestants (and even a mirror image of themselves) before moving on to fight against the champion. The following is a list of characters that exist only as opponents and are not available for players to control:

Reptile – A secret opponent. A ninja similar to both Sub-Zero and Scorpion. He only appears under certain circumstances in a single player game. Essentially, when doing combat in a particular arena, the player must have two flawless victories, avoid blocking any attacks, and execute a fatality. If done correctly, Reptile will appear and challenge the player

Goro – The reigning Mortal Kombat champion from The Outworld. Goro is a giant four-armed humanoid who has won the tournament nine times in a row.

Shang Tsung – A dark sorcerer and ruler of The Outworld. He is the current host of the Mortal Kombat Tournament. If the player is able to successfully defeat Goro, Shang Tsung will appear and challenge the player. Shang Tsung is able to take the form of other contestants and execute their abilities. 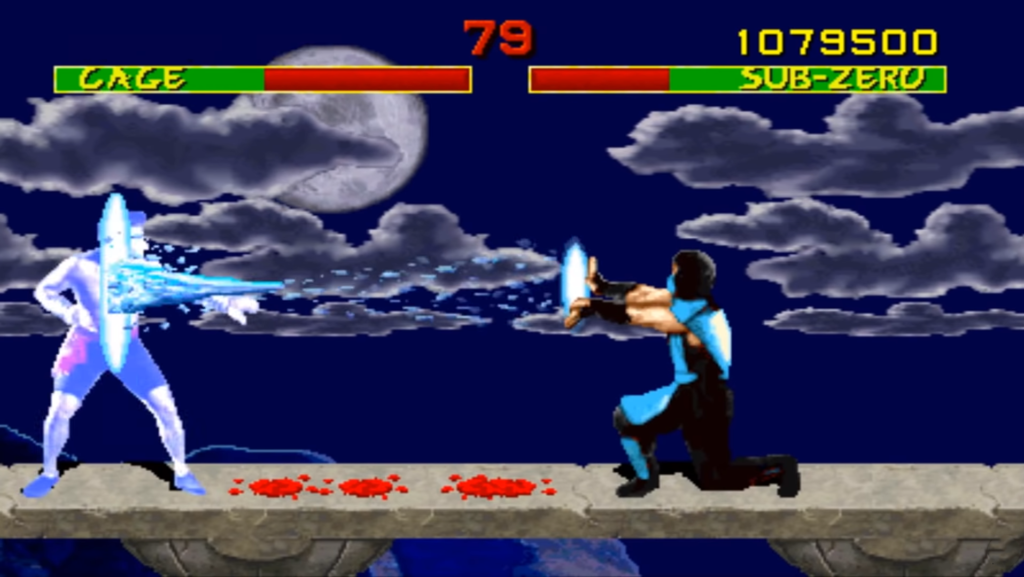 Just like Street Fighter, Mortal Kombat started out as an arcade cabinet. As such, the game itself is really designed to be played in an arcade environment. The control scheme was developed specifically for the hardware included in the cabinet. The pace of the game is also intentionally designed for short-term play. But of course, like many successful arcade titles, home ports were inevitable. When it came to enjoying Mortal Kombat at home, there were a number of options. The two most popular versions were for the Super Nintendo and the Sega Genesis. Each ports having their own advantages and disadvantages.

For its day and age, the original arcade version of Mortal Kombat was a graphical masterpiece. Instead of featuring cartoon-like artwork, most of the visuals in the game are comprised of actual photography and digitized video (albeit heavily pixelated). This level of photo-realism proved problematic when porting the game to home consoles. Between the SNES and the Genesis, it is the SNES that comes closest to the arcade in terms of graphical quality. However, one of the biggest selling points for the game was its gratuitous use of blood and gore. Due to Nintendo’s strict censorship polices at the time, these elements were largely stripped from the game. So fans who played the game for the sheer shock value of seeing a character become impaled on spikes, or having their head and spine ripped straight out of their body – they tended to prefer the Genesis port of the game.

The original version of Mortal Kombat featured an eight-way directional joystick and a total of five buttons – two for punches, two for kicks, and one to defend. These controls translated to the SNES with ease. But the three-button controller for the Genesis required the developers to get a bit creative. This resulted in some rather cumbersome playcontrol for Genesis users.

In the end, it’s difficult to point to one console version and declare a winner. But, if I had to make a personal choice, I’d go with the SNES version. Even though I detest censorship, I feel the SNES port is the technically superior product. That being said, these days, getting your hands on any version of the original game can often be challenging.

For me personally, the arcade version provides the purest and most enjoyable experience. For the sake of this review, I played through the game on the Xbox 360 via the Mortal Kombat Arcade Kollection. 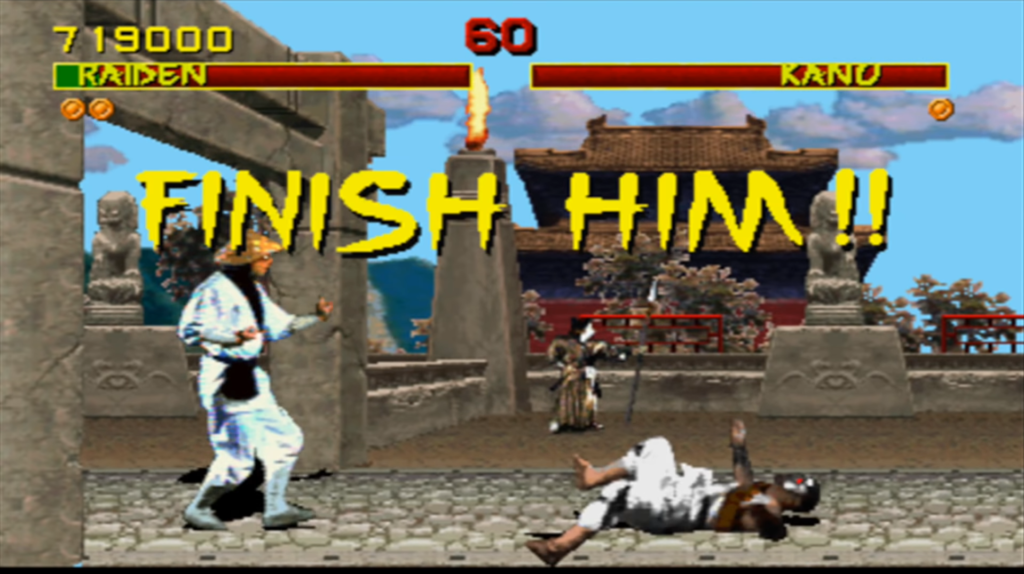 Growing up, Street Fighter II was my go-to game whenever I wanted some one-on-one martial arts action. At the time, Mortal Kombat just didn’t capture my attention in the same way for one reason or another. This time around, having recently played Street Fighter II for a review on this site, I actually found myself enjoying Mortal Kombat more. For one, button combos required to execute special moves and fatalities seemed easier and more consistent to pull off. Often, in Street Fighter II, I’d have a tough time with this. What worked once before, often didn’t seem to work again, even though the movements felt right. I didn’t have this problem with Mortal Kombat. Also, despite being a bit gruesome, being able to pull off a spectacular finishing move at the end of the match has a pretty satisfying feel to it.

The biggest problem with this game is the difficulty you’ll likely having in finding a way to play it. Mortal Kombat is not available available on any of the retro classic consoles. Nor is it currently available for digital download on any modern consoles. Aside from paying top dollar for a bulky and oversized arcade mini-cabinet, you’ll need to get your hands on either a ps3 or Xbox 360 to enjoy the game in its original form. The next best option comes in form of the original PC port which is currently available on GOG.

Either way, unless this game gets a proper re-release in the future, you’ll likely be playing it alone. Neither the PC, PS3, or Xbox 360 versions have an active online community. So even though the option to play online against another person exists, there’s rarely anyone else online.

In closing, Mortal Kombat is still amazing, even after all these years. I had an unexpected blast playing my way through the game in single player mode, trying the different characters and mastering their special moves. If you still have a 360 or PS3 in the closet, the Arcade Kollection would make a great addition to your collection the next time you and a friend feel the need for some retro brutality. 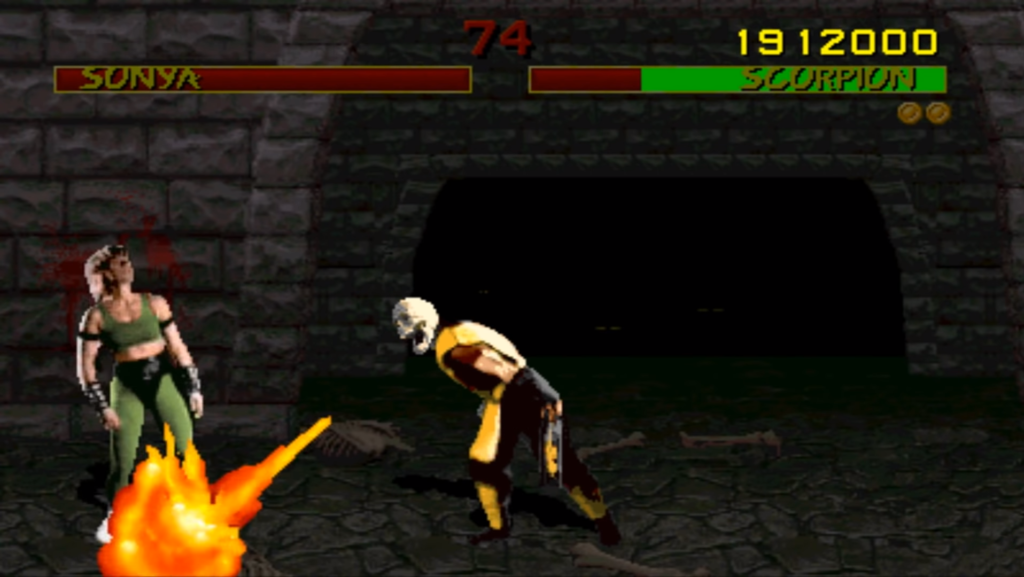 Difficulty: Medium –  As is the case with these type of games, when playing in single player mode each opponent you face will gradually increase in difficulty. After working your way through the roster of characters, there’s even a few round that pits you against two fighters back-to-back. Conquering the game will take time. But with a little patience, it isn’t too difficult to master. The arcade version of the game actually tends to be the most difficult, but even so, it’s pretty manageable with practice. Playing against other players is a completely different story.

Story: Each character has their own backstory that explains their motivation for participating in the tournament. More details on the lore behind the game can be found in the game’s manual for home console players. While the backstory for the game is still pretty brief, it’s actually surprisingly well done for this type of games.

Originality: Mortal Kombat was designed with the intention to take on the Street Fighter franchise. As such, there are a number of similarities. To set itself apart, Mortal Kombat is aimed more at adult audiences. It is famous for introducing the concept of “finishing moves” and ultra-violence to the genre.

Soundtrack: The music in Mortal Kombat is not nearly as memorable as other games of the same type. But, it still manages to be fitting and appropriate.

Fun: Even now, decades later, Mortal Kombat still manages to be quite enjoyable. It’s not without its quirks, but that doesn’t do much to detract from the fun.

Graphics: At the time of its release, Mortal Kombat boasted some pretty impressive visuals. Today, the pixelated graphics look dated. But it’s still an impressive work of digital art.

Playcontrol: Nothing will ever beat playing this game on the original hardware. Of the home console ports, the SNES is the clear winner here. If you’re playing the Arcade Kollection, I found the Xbox 360 version to be the most responsive. Playing on the 360 just felt much more natural and fluid compared to the PS3. The Genesis comes in the last place here.

Value: At the time of this writing, the original version of Mortal Kombat is not readily available on modern systems. the Arcade Kollection will run about $10.00 and includes the first three games in the series. At this prince, that is an excellent value.

Overall score (1-100): 80 – Mortal Kombat is a classic competitive brawler that gives Street Fighter II a run for its money. In my opinion, it didn’t quite meet the same mark of excellence, but it came really close. Regardless, you cannot overlook the fact that this game evolved the fighting genre in a number of important ways. Despite its legacy for controversy, it’s a classic game that’s worthy of praise.