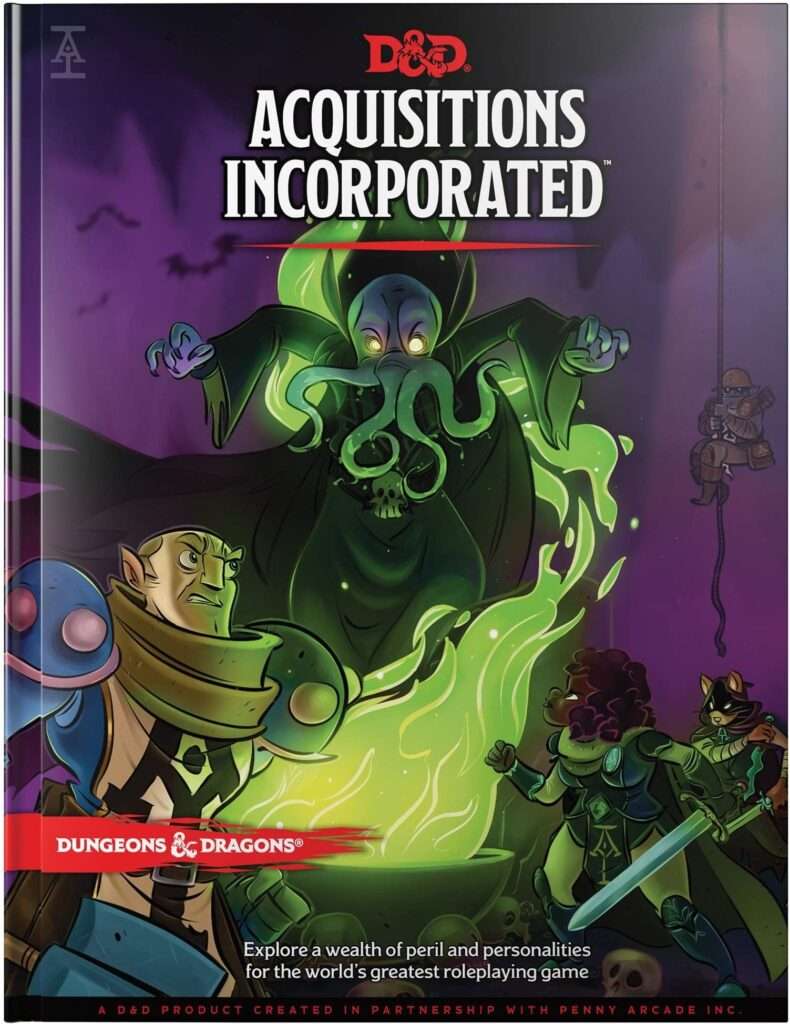 Of all the fifth edition D&D products released so far, Acquisitions Incorporated is the first one I considered passing up. Compared to other D&D supplements, this one seems a little odd. You see, while most supplemental material focuses on serious things like new campaign settings and cultures, this one strikes a comical tone and introduces a concept best described as “corporate adventuring”. The whole gist behind everything in this book is just silly and somewhat obnoxious. And while I love random humor just as much as anyone, these are not typically traits that I look for when I play D&D. With this in mind, Acquisitions Incorporated seemed to offer very little to gain my interest.

Essentially, Acquisitions Incorporated is a book that lays the groundwork for DMs and players that want to run a campaign styled after the popular Penny Arcade podcast of the same name. In case you’re unfamiliar with what I’m talking about, allow me to bring you up to speed. In the late 90’s a webcomic by the name of Penny Arcade was born. The comic strip focused on humor aimed towards gamers and those that engage in “nerdy” activities. Over the years, the popularity of the comic spread to the point where Penny Arcade is now a booming brand and business. A little over ten years ago, Penny Arcade launched a popular D&D-focused podcast. This is where the world of Acquisitions Incorporated was born.

In the ongoing Penny Arcade campaign, Acquisitions Incorporated is the name of an extremely popular adventurer’s guild – one that is structured and operated like a mega-corporation. As a result,  adventurers (or interns) that sign up, have to deal with a ridiculous amount of red tape, corporate policies, and other “Office Space-like” nonsense. The whole thing actually does make for quite an entertaining and humorous spectacle. But is it something that the average D&D player wants in their campaign?

The answer to that question is “probably not”. But thankfully, just like any other optional supplement, everything included in this book is completely optional. So, with that in mind, I have no problem whatsoever with Wizards of the Coast teaming up with Penny Arcade and releasing official material like the Acquisitions Incorporated sourcebook.

So, let’s take a look at just what is included in this book:

First, there is an introduction to the Acquisitions Incorporated concept, rules for implementing it into an existing campaign, and an in-depth look on how the corporation is structured and operated.

Second, there’s a number of new class backgrounds, spells, monsters, and even a new race.

The last half of the book features a number of short adventures that fit into the Acquisitions Incorporated world.

Personally, I’m not likely to ever run an Acquisitions Incorporated campaign. But there are a number of interesting options in this book that could very easily make their way into a standard D&D session. For example, even though many of the class backgrounds are specifically written to fit into this type of campaign, it wouldn’t take much work to adapt them to a standard D&D setting. The spells included in the book are also very geared towards the Acqusitions Inc style of gameplay, but could easily be useful to nearly any adventurer.

In closing, I do feel like this is a very niche release. Players who love the humor and and entertainment found in the Acquisitions Incorporated podcast, will absolutely adore this book. It provides everything needed to run this type of campaign at home. It is extremely well written and presented in a very accessible way. But, for the majority of D&D players, this book may seem like nothing more than an oddity. But, even oddities have their value from time to time. With this in mind, I applaud WotC for taking a risk and publishing a supplement as experimental as this one. I hope we see more out-of-the-box products like this one in the future.