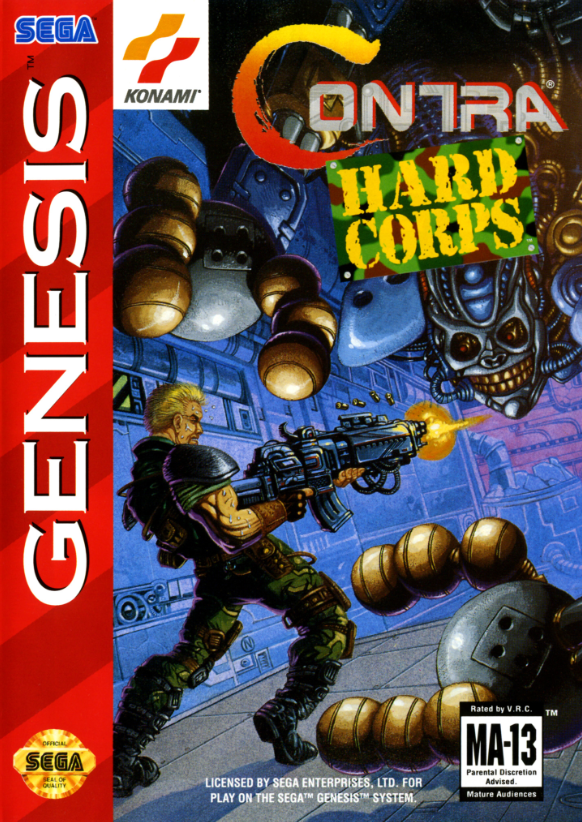 Completing my foray into the Contra Anniversary Collection, I’m excited to finally share my review of the elusive fan favorite, Contra – Hard Corps!

This is a game that many players know by reputation only. Originally released on the Sega Genesis, Contra – Hard Corps is a game that flew under the radar for many fans of the main series. This game is a direct sequel to Contra III, while also being the first entry in the “Hard Corps” sub-series of the Contra franchise.

In a number of ways, Hard Corps is very similar to its predecessor. It features fantastic 16-bit graphics, a grooving soundtrack, co-op multiplayer, and it retains the extreme level of difficulty that has become synonymous with the Contra name. But don’t let that fool you, this game also makes some very welcome changes to the series. To start with, Contra – Hard Corps, allows players to pick from a small roster of playable characters. Each character offers a slightly different play experience. For example, some characters are able to deal more damage but are slightly less agile than others. Each character also has a different arsenal of weapons at their disposal. This game also introduces interactive cutscenes to the series, as well as a branching storyline. 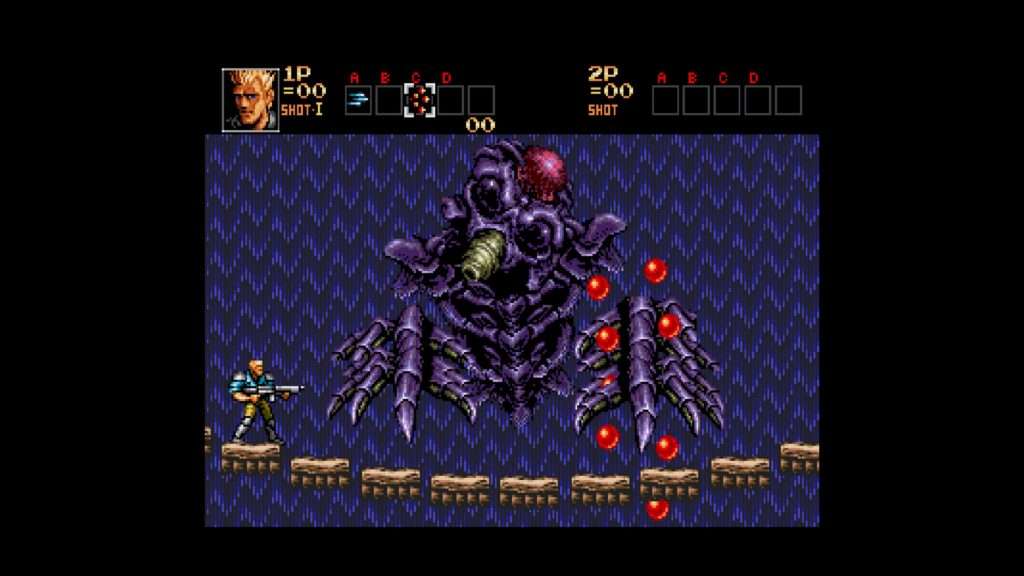 Storyline has always been somewhat of an afterthought in the Contra series – until now. In this game, you are a member of the elite Hard Corps – a military force tasked to restore order to a war-torn metropolis. The game begins when a mysterious hacker infiltrates the city network and infects a number of military robots with a virus, causing them to go rogue. Players are able to select from one of four playable characters:

Ray – Your run-of-the-mill military commando. A well balanced character – average power and agility, but has access to a great range of weapons.

Sheena – A female commando. Also fairly well balanced, but sacrifices a little in the way of damage power for some slightly more versatile weapons.

Fang – A beast/man hybrid. Fang is the most powerful damage dealer of the group. But is a little harder to control due to his larger size.

Browny – A robotic character. Browny is the weakest of the group in terms of damage, but he is the most agile. Many of his weapons also feature homing capabilities.

The game beings with the player (or players) entering the besieged city, hot on the trail of the hacker. From here, the game plays just like any other Contra title. Slews of enemies, explosions, and bullets flying everywhere. However, at the end of the level, once the boss is defeated, the players are treated to their first real interactive cutscene. At the end of this, the player is presented with a question. The answer they choose will both determine the direction of the story and the level they will play next. This formula continues throughout most of the game, offering a very replayable experience – complete with a total of six unique endings. 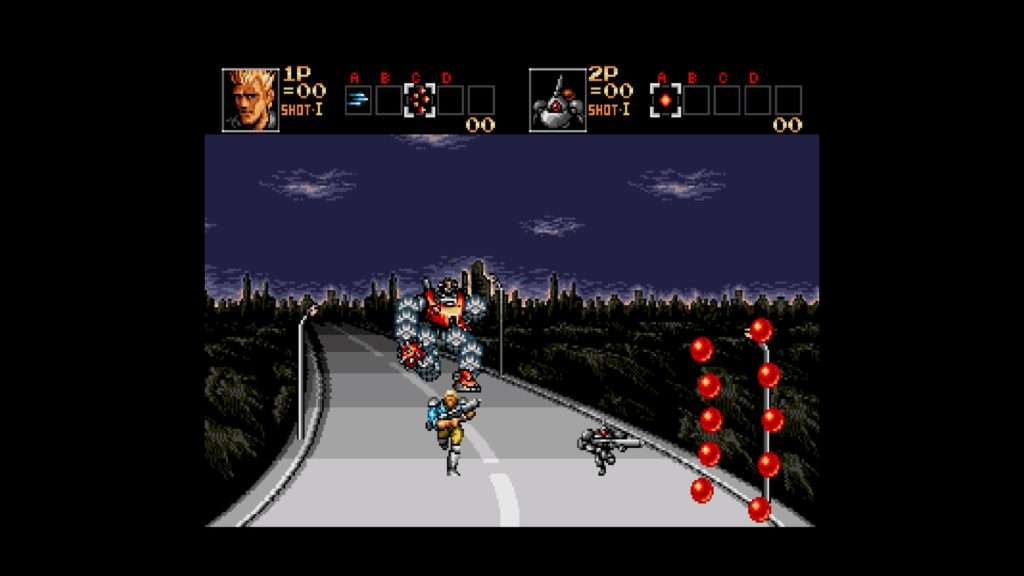 Contra – Hard Corps continues the trend of keeping players on their toes. Some levels are your standard run-and-gun platformers. While others will see your characters speeding through the streets on hover bikes, or running from out-of-control robots on foot while firing shots over their shoulders. With this entry in the Contra series, you never know what to expect next. It’s an absolute treat that left me on the edge of my seat.

But, as I mentioned above, it also retains the insane difficulty level that the series is now infamous for. In this game, your character starts off with only three lives. If you lose them all, you can either quit or continue. The trick here is, there’s only a total of five continues before you are forced to start the entire game over from scratch. This may seem like a fair amount, but until you actually sit down to play, you have no idea just what sort of hell you’re in for. I daresay, that most casual players would be unable to clear two or three levels on their first try without burning through all five continues. As with anything, practice makes perfect. But the really infuriating thing is the fact that the Japanese version of the game is much easier. While the JP game itself is identical in terms of contents, their version of the game grants a health bar to each player. Essentially giving them three hits before losing a life. Also, the JP release features unlimited continues. To me, removing these from the US release seems like a pointless change.

I suppose my issue isn’t really with the challenge itself. But, with the fact that this wonderful game didn’t really have the chance to be appreciated simply due to its brutal difficulty level. Most players do not have the patience or the tolerance to see a game like this through to the end. Which is a shame, because Contra – Hard Corps is really a work of art. But, all that aside, it is my belief that if Hard Corps had been released on the SNES instead of the Genesis, it would have dramatically increased the popularity of the series. 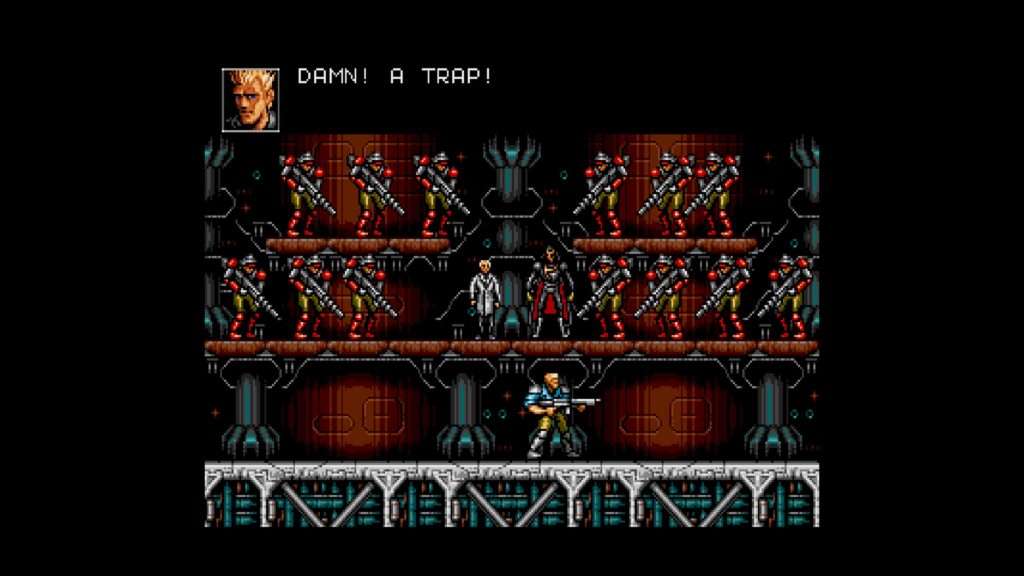 Difficulty: Very Hard –  As I mentioned countless times in the write-up above. This is game is brutal. Playing with a second player doesn’t really make things any easier either. In fact, unless you’re playing with someone as good as, or better than you, co-op mode only makes this game even tougher. When playing with my son, the two of were us able to make our way through the first half of the game together. Even then, we had to apply liberal use of the save state feature that’s part of the Anniversary Collection. When playing the game alone, I was able to see it through to the end, but even I have to admit to saving the game at the beginning of nearly every stage. If I’m being honest, I don’t think I would be able to play through this title from start to finish using only the limited number of continues provided.

Story: This game goes to great lengths to bring a solid storyline to the Contra universe. The story presented here touches on the lore presented in the older games, while also crafting something entirely new and unique. This is a big step up for the series.

Originality: Hard Corps introduces a slew of new elements to the series; a cast of characters, branching levels and story, fun and inventive weapons, etc. It’s a breath of fresh air.

Soundtrack: I guess nothing is going to beat the sheer awesomeness of the original Contra in terms of composition. The music in Hard Corps is chock full of thumping grooves. It’s very fitting and suits the game well. Personally, I didn’t find any tracks that really jumped out at me. But overall, it is very well done.

Fun: From an entertainment standpoint, this game is a blast. It’s filled with “wow moments”. But, the extreme difficulty level does manage to cripple the enjoyment just a bit.

Graphics: This is the best looking entry in the series so far. The graphics in this game actually manage to exceed those in Contra III by a bit. Good stuff.

Playcontrol: The Sega Genesis controllers are weird beasts. Now, I have never played this game on the original hardware, so I can’t really make a fair comparison here. The Contra Anniversary Collection is my first experience with this game. Like other titles in this anthology, I suspect that this game, probably feels a bit more natural on the original hardware. But, I didn’t really have any complaints when playing it on the PS4 controller. I can’t attest to how well it might perform on other systems.

Value: Getting your hands on a physical copy of this game will likely run you anywhere from $20-$45 on eBay. This game is also included on the Sega Genesis Mini, which retails for $80. If you ask me, the easiest way to enjoy Contra – Hard Corps is through the Contra Anniversary Collection. This collection includes a total of seven games from the Contra series, plus their international counterparts – all for $20.00. With this in mind, it is certainly the most affordable and accessible way to enjoy this game.

Overall score (1-100): 90 – Contra – Hard Corps is really a revolutionary game. It was way ahead of its time. Sadly, it’s a gem that went largely ignored by the majority of the gaming community. Since it is included in the Contra Anniversary Collection, there has never been a better time to get ahold of this treasure. Just know in advance that it is extremely challenging. Don’t say I didn’t warn you.