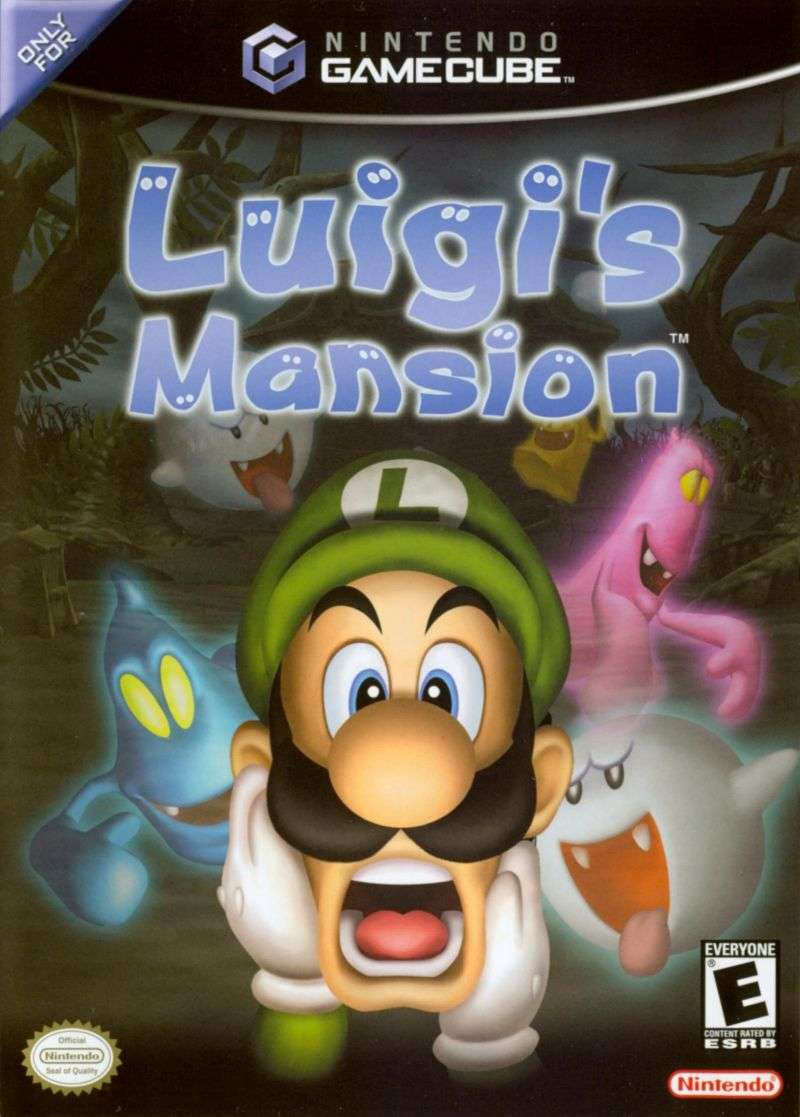 Happy Halloween! As always, I’m celebrating Halloween with a review of a spooky game. But this time, its extra special because this review also marks the first entry in a new chapter of my backlog. That’s right, I’ve finally reached the GameCube/PS2 era! I’m starting off this new generation of game playthroughs with a real classic; Luigi’s Mansion.

When it comes to reviewing classic GameCube titles, there’s no better place to start than Luigi’s Mansion. After all, it was a launch title for the system, plus it does a superb job of showing just what the GameCube is capable of. The game itself features stellar graphics and audio, all while providing the perfect showcase for the new GameCube controller. The only thing missing from the game is, well… Mario! That’s right, despite being part of Nintendo’s Mario game series, this game puts the spotlight on Mario’s brother Luigi instead. And you know what? That’s just fine. The way I see it, poor Luigi has been the underdog for far too long. It’s about time he was given his very own game.

So, if we have a Mario game that doesn’t star Mario, what exactly is going on here? Well, here’s the rundown; One day, Luigi receives a letter in the mail stating that he’s the winner of a contest. He doesn’t recall entering a contest, but he throws caution to the wind when he sees the grand prize: a beautiful mansion! Luigi and Mario agree to check out the mansion together. But when Luigi arrives, his brother is nowhere to be seen. To make matters worse, the mansion is much more foreboding than expected. Nervous about what may have happened to Mario, Luigi enters the mansion to look for him. It doesn’t take long for him to realize that the mansion is haunted! Thankfully, Luigi bumps into the quirky caretaker of the property, Professor E. Gadd, who explains that an extremely powerful ghost named King Boo has taken control of the mansion and is also responsible for kidnapping Mario. But all is not lost! Professor Gadd has invented a special weapon to combat the ghosts, the Poltergust 3000 – a ghost-sucking vacuum! With some reluctance, Luigi accepts the gift. Knowing that Mario is in trouble, he must face his fears and explore the mansion in search of his brother’s whereabouts. 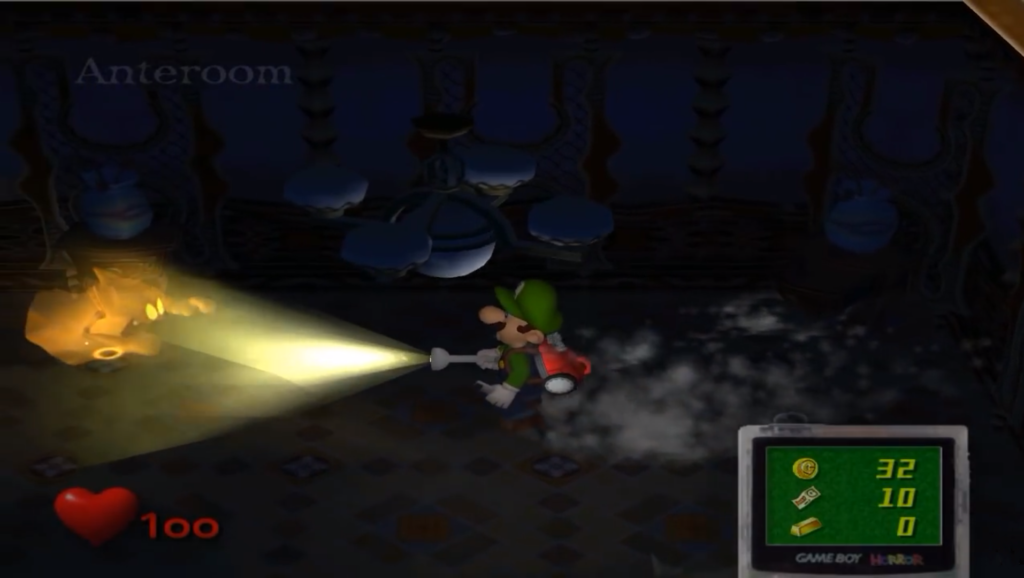 Luigi’s Mansion is unlike any other Mario game thus far. It’s not a platformer, or even an action game. Instead, it’s more of an exploration/puzzle game. The basic gist of the game is this: you play as Luigi as he explores the mansion, eliminating any ghosts that cross his path. In the mansion, there are essentially three types of ghosts: basic ghosts, portrait ghosts (spirits of the mansion’s former owners), and Boos. Basic ghosts can appear anywhere. They will attack Luigi as he explores dark places. But, if Luigi shines his flashlight on them, they will freeze briefly. While the ghosts are stunned, there’s a short window of time in which they can be attacked with the vacuum. Portrait ghosts, work the same way except that there is usually a trick to exposing their weak points. Learning how to make these ghosts vulnerable is a big part of the game. Sometimes it involves interacting with different items and furniture in the room in which the ghost resides, other times it involves attacking in a certain manner. (This is where the puzzle aspect of the game comes into play.) Finally, we have the Boos. These ghosts hide in furniture and objects scattered throughout the mansion. Early in the game, Luigi is given a special tracker that he can use to detect the presence of these hidden ghosts. Once the ghosts are found and exposed, they will fly out and be vulnerable to attack.

At the beginning, most of the mansion is inaccessible. Locked doors bar your path at almost every turn. However, as you eliminate each portrait ghost, they will leave behind keys that can be used to unlock doors, allowing players to progress further. Eventually, you’ll have full run of the mansion. But it’s always worth revisiting older areas in search of Boos and hidden treasure. In this way, Luigi’s Mansion often feels somewhat similar to the original Resident Evil game, albeit with a much lighter tone. 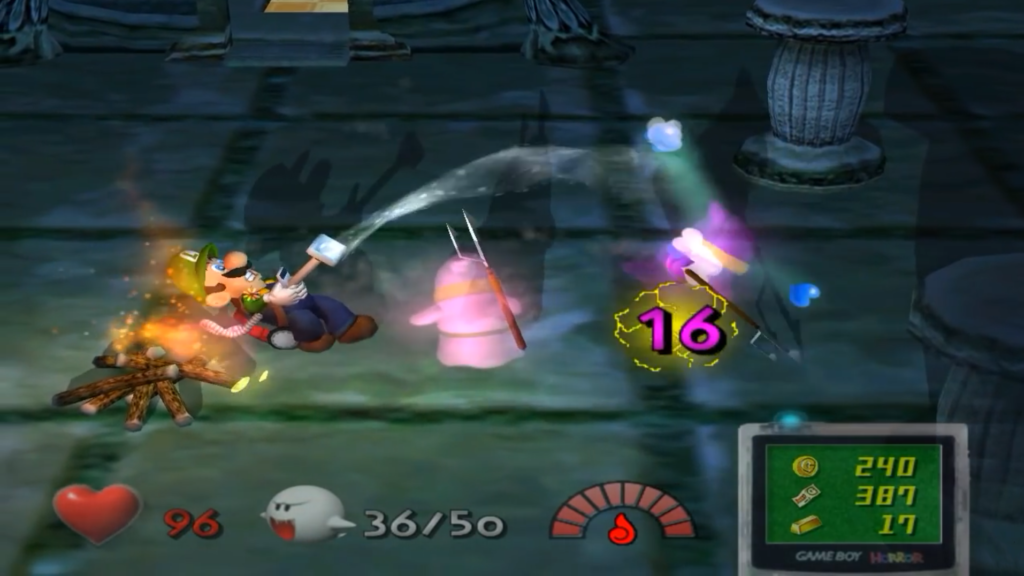 Luigi’s Mansion is one of those rare games that just seems to get everything right. From the aesthetic to the level of difficulty, the whole game feels very polished and well done. If I had to find any complaint with the game, it would be with the fact that game feels just a tad too short. For my playthrough, it took just over seven hours to complete from start to finish. Which, for this type of game isn’t really unheard of. But, the game was so enjoyable, I wanted to keep playing. That’s a good problem to have, I suppose.

Today, there are two versions of Luigi’s Mansion. The original GameCube version and the 3DS remake. For most players, the 3DS version will be the easiest to obtain. Plus, it has the added benefit of being in 3D, which is very fitting for a game of this type. But sadly, the 3DS version suffers in terms of playcontrol. Luigi’s Mansion was designed specifically with the GameCube controller in mind, and the controls just don’t port over very well to the 3DS hardware. So, with this in mind, if you’re able to get your hands on the GameCube version, this is the version I recommend.

Luigi’s Mansion is special to me. It was the first console game I purchased after a long hiatus of simply not playing console games. You see, I was huge console gamer as a kid. But as I reached my teenage and young-adult years, my interest shifted to PC games. It wasn’t until I was married that my wife and I decided to purchase a console for our new apartment. The GameCube was that console and Luigi’s Mansion was the game we purchased to go along with it. Now admittedly, we probably only spent a few hours tinkering with the game back then before moving on to other things. But I have vivid memories of watching my wife navigate Luigi through the corridors of the mansion, thoroughly enjoying herself. With this in mind, it was nice to finally sit down and explore this classic for myself. 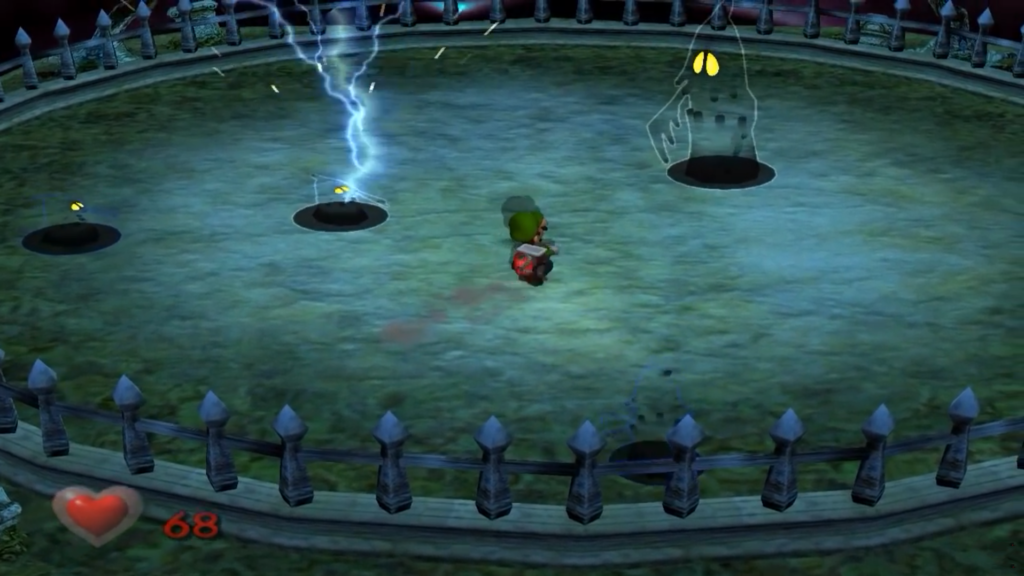 Difficulty: Easy –  For the most part, there is very little challenge to this game. When starting out, it does take a little practice to master the Poltergust 3000, but eventually it’s easy to get the hang of it. Some of the boss fights, and especially the final battle in the game, are pretty challenging. But as long as you save your game frequently, re-attempting these encounters is relatively painless.

Story: Of all the entries in the Mario series so far, Luigi’s Mansion probably has the most backstory yet. Even so, it’s still a very loose and casual tale, which is just fine. This type of game is about fun, not storytelling.

Originality: Horror/Exploration games were nothing new by this point. And if we’re being honest, Resident Evil already had players poking around in a “spooky mansion” a few years before this game ever hit the scene. But, Nintendo managed to take the genre and present it in a way that only they can. This spin helps keep the game feeling new and unique.

Soundtrack: The score to this game is very well done. To start with, the main theme is catchy and fitting. Apparently, I’m not the only one who thinks so, even Luigi hums along with the music as he tip-toes his way through the dimly lit hallways of the mansion. Games of this type make it very easy for developers to put little thought into the musical score. But Nintendo didn’t take the bait.

Fun: This game really stands the test of time. Everything form the atmosphere to the pace of play is well done and makes this a very enjoyable title.

Graphics: Luigi’s Mansion looks fabulous – even by today’s standards. Nintendo really wanted to show off the graphic capabilities of the GameCube with this title, and they did a fantastic job. Everything from the lighting, to the transparency of the ghosts is spot-on. Even the dust in this game looks absolutely fantastic. It’s actually a little shocking how good this game looks even nearly two decades later.

Playcontrol: On the original GameCube hardware, the playcontrol is nearly perfect. Everything feels natural and responsive. Getting the hang of the inverted controls when using the vacuum can take some getting used to, but overall it’s not particularly difficult to master. The game offers two options when it comes to controlling Luigi, side-step mode or standard mode. For the most control, I suggest playing in Standard, as it gives you more freedom and precision. The 3DS version, while playable, feels very unnatural. The lack of buttons on the 3DS when compared to the GameCube controller makes the overall experience a little more cumbersome.

Value: The only version of the game that’s readily available today is the 3DS remake, which usually retails for around $30. Used copies of the GameCube edition typically range from $30-$50 depending on condition. For collectors, these prices are acceptable. However, for such a short game it is difficult for me to recommend paying that much for the casual gamer.

Overall score (1-100): 95 – Luigi’s Mansion is an underrated classic. It’s a casual, fun title that doesn’t take itself too seriously – but still manages to hook you and reel you in. It’s the perfect introduction for the GameCube, showcasing the console’s graphics and unique controller. This game is an example of Nintendo at its finest!

Available today on: Currently unavailable – (Updated as of Spring 2022)