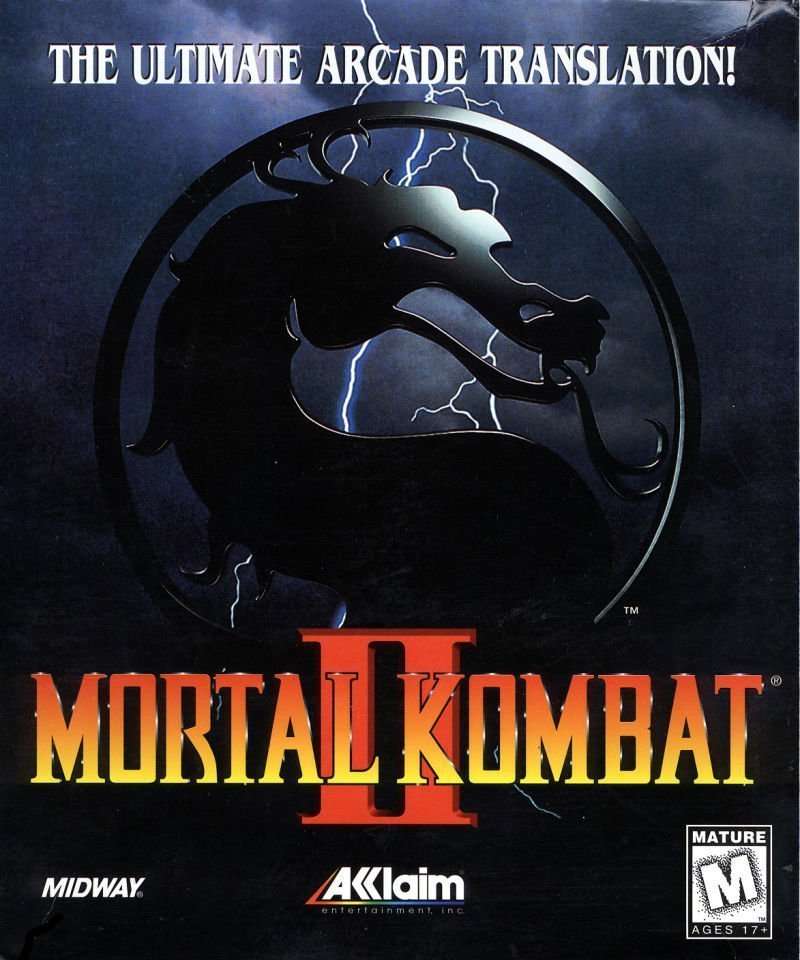 Last week, I posted my playthrough review for the original Mortal Kombat. I enjoyed this classic arcade fighter so much that I decided to jump right into the second entry in the series, Mortal Kombat II. Released only a year after the original game, it would be easy to assume that Mortal Kombat II would follow the same blueprint provided by the Street Fighter franchise and simply be nothing more than a refresh of the original game. Well, nothing could be further from the truth. While obviously sharing a number of similarities to its predecessor, MKII also features just as many new additions and surprises.

Mortal Kombat II continues the storyline set up in the original game. For the purposes of canon lore, this game assumes that Liu Kang was the victor of the last Mortal Kombat tournament, defeating both Goro and Shang Tsung in the final battle. The storyline also takes a few additional liberties. First, during the events of the last game, the ninja known as Sub-Zero is murdered at the hands of his rival, Scorpion. Also, the characters of both Kano and Sonya Blade are captured by the Outworld’s forces. In fact, during certain levels in MKII, they are actually on display in the background as a warning to anyone who might oppose the emperor of the Outworld. As a result of Shang Tsung’s defeat, the Earth was spared destruction and the evil Shang Tsung was banished back to his master, Shao Khan, in the Outworld. The humiliated sorcerer begs his master for forgiveness and lays out a plan for revenge – to invoke a little known rule of Mortal Kombat. A rule which allows for both a rematch and would also enable the next tournament to be held in the Outworld itself. If he could have his youth and power restored through Shao Kahn’s divine magic, he suggests his opponents would be no match for him on his home turf.

Mortal Kombat II brings back the following playable characters from the last game: Liu Kang, Johnny Cage, Scorpion, Raiden, and (oddly enough) Sub-Zero (who is actually the original Sub-Zero’s brother, having taken the name of his elder sibling) .

This time around, the game also allows players to fight as both Shang Tsung and his mysterious body guard, Reptile – both present in the last game, but only as CPU-controlled opponents.

Jax – A Special Forces agent who enters the tournament in attempts to rescue fellow soldier Sonya Blade.
Baraka – An Outworld native, hoping to bring glory to his tribe through victory.
Kitiana – A beautiful ninja in service to Shao Khan. She has recently uncovered a shocking truth behind her heritage – leading her to secretly rebel against Shao Khan.
Mileena – Kitiana’s twin sister. A loyal servant to Shao Khan, she is sent to participate in the tournament to keep a watchful eye on her sister.
Kung Lao – Friend of Liu Kang and fellow Shaolin monk. Kung Lao’s goal is to avenge his fallen brothers, all of whom fell victim to the Outworld’s previous invasions.

But the roster doesn’t stop there. The following characters are also included in the single player game as fightable bosses or secret combatants:

Kintaro – Champion of the Outworld. Kintaro wants nothing more than to avenge the defeat of Goro, the Outworld’s previous champion.
Shao Kahn – A former god, and ruler of the Outworld. Shao Kahn is a being of extraordinary power, and the final boss of the single-player game.
Jade – A mysterious, green-clad female ninja. She only appears in the single player game, and only if the player wins a specific battle using specific modes of attack.
Smoke – A strange, grey-clad ninja. Smoke is a childhood friend of the original Sub-Zero. Occasionally, while playing the game, players may notice a picture of the game’s creators appearing in the corner of the screen. Whenever this occurs, the player can perform a special button combination. If executed correctly, they will be instantly transported to a battle with Smoke.
Noob Saibot – A super secret character who takes the form of a black-clad ninja. In later games, it is revealed that he is actually the ghost of the original “Sub-Zero”. This battle actually unlocks in two-player mode, if one of the players wins a large number of consecutive battles.

Whew! That’s quite a cast of characters! 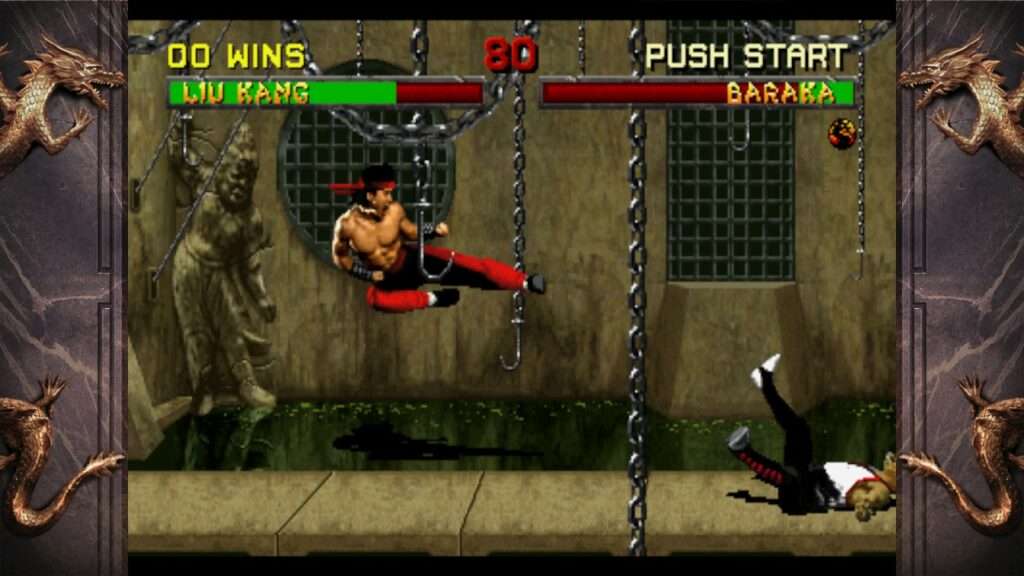 In terms of gameplay, Mortal Kombat II will be very familiar to fans of the original game. However, there are a number of important changes this time around. First of all, the gameplay has a much faster and fluid feel to it. Whereas the original game felt a little “stiff” compared to other arcade fighters, Mortal Kombat II now feels much more loose and responsive. Second, the controls are revamped to add an additional punching attack, improved response time, and even more special moves. Also worth mentioning is the addition of new finishing moves. Each character still has their own unique “fatality”. But MKII has added some new level-specific fatalities as well. On top of that, if you’re not feeling particularly brutal, you may also now choose to execute either a “babality” or a “friendship” finishing move instead. Executing a “babality” will transform your opponent into a crying infant. (Silly, but often amusing). “Friendship” moves will result in an equally silly, but friendly gesture. For example, presenting your opponent with flowers or performing a humorous dance.

The advancements don’t just stop with gameplay tweaks. Mortal Kombat II also features improved graphics and audio over the original game. The game’s character art still features digitized photography. But this time, it is captured at a much higher resolution. This means the pixels are not quite as jagged and the motion appears much smoother. This is true for both the original arcade version and the home console ports. (Which look and feel much closer to the original arcade release this time around).

As with the original Mortal Kombat, finding a copy of this game today can present a challenge. Mortal Kombat II is not available for download on modern consoles. Neither the SNES or Genesis port of the game are readily available. The arcade version was released as part of the Mortal Kombat Arcade Kollection for both Xbox 360 (arcade) and PS3 (Playstation Network). But this collection is not available for either the Xbox One or PS4. For the purposes of this review, I played through the game on the 360. 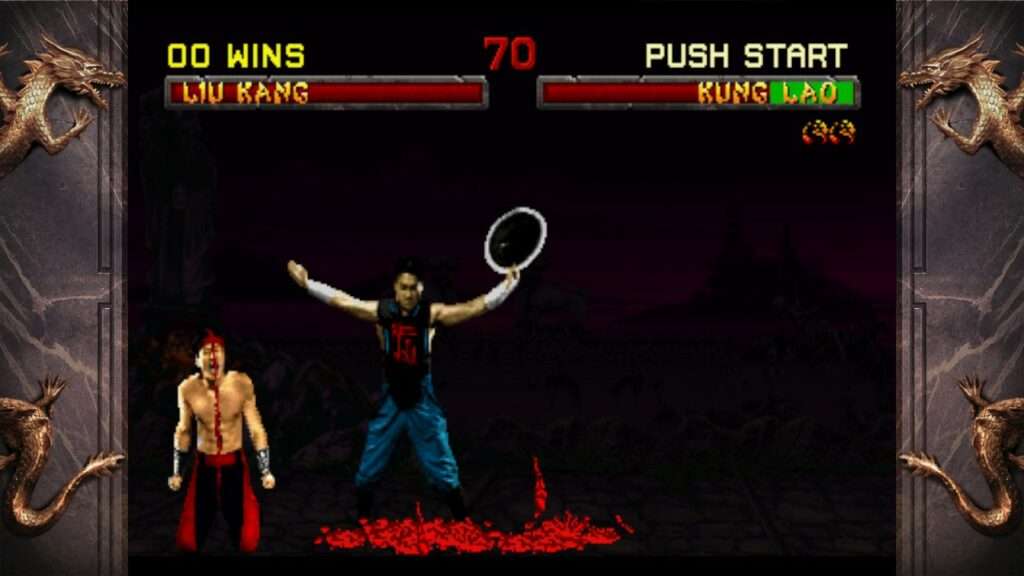 In almost every way, Mortal Kombat II is a vast improvement over its predecessor. From playcontrol to graphics, MKII outshines the original game and finally posed a serious challenge to the Street Fighter franchise. The only real complaint I have with this game is the difficulty you’ll likely having in finding a way to play it. Unless you feel like shelling out several hundred dollars for the mini-cabinet that’s currently for sale at Wal-Mart, you’ll need to get your hands on either a ps3 or Xbox 360 to enjoy the game in its original form. The next best option is the original PC port which is currently available on GOG.

Either way, unless this game gets a proper re-release in the future, or you have a buddy sitting besides you, you’ll likely be playing it alone. Neither the PC, PS3, or Xbox 360 versions have an active online community. So even though the option to play online against another person exists, there’s rarely anyone else online.

Mortal Kombat II is a great example of going evolution. It takes everything good about the original game and improves upon it. If you still have a 360 or PS3 in the closet, the Arcade Kollection would make a great addition to your collection the next time you and a friend feel the need for a bloody beatdown. 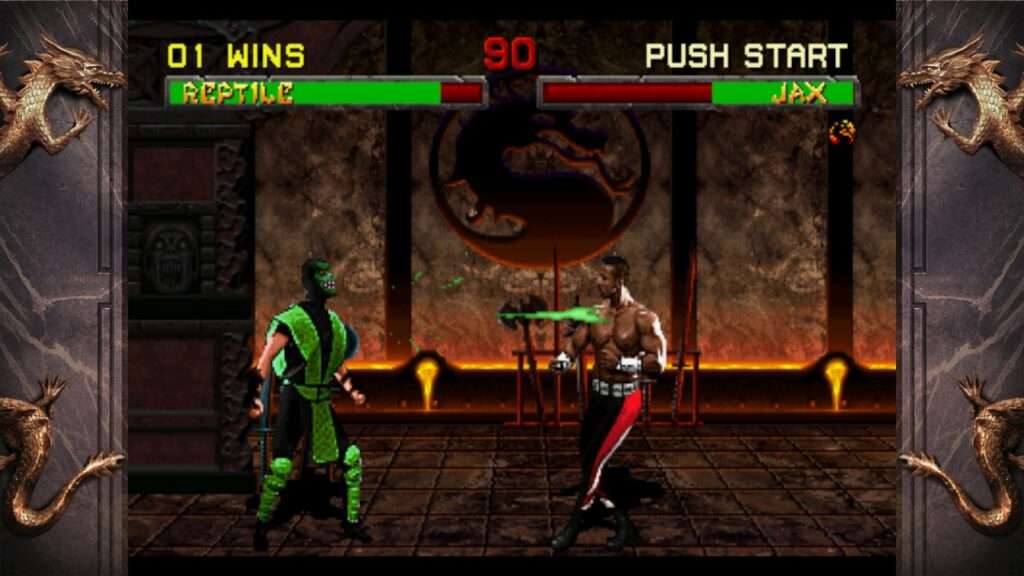 Difficulty: Hard –  Mortal Kombat II is significantly harder than the original game. This applies to both the arcade version and the home ports. The single player game provides different ladders, ranging from novice to veteran players. But regardless of which you choose, the AI difficulty makes a major jump after the first few matches. Of course, when playing against another person, the challenge you face will vary depending on the skill of your opponent.

Story: The lore for this game builds off of the events from the first Mortal Kombat. Each character has their own backstory that explains their motivation for participating in the tournament. More details on the lore behind the game can be found in the game’s manual for home console players. At this point, the backstory for the game has become quite detailed compared to other arcade fighters.

Originality: Mortal Kombat II takes the best of the original game and adds a number of improvements. By expanding upon the original elements of the first title (secret characters, finishing moves, etc), it’s the perfect example of gaming evolution done right.

Soundtrack: The music in Mortal Kombat II is much better than that of the original game. Even so, it’s still not as memorable as the music found in Street Fighter II. But, it’s fitting.

Fun: Even now, decades later, Mortal Kombat II still holds up amazingly well. It’s great for parties or even if you just want to kill a half an hour with a buddy.

Graphics: Even by today’s standards, Mortal Kombat II looks pretty good. At the time of it’s original release, there wasn’t a better looking game around.

Playcontrol: Nothing will ever beat playing this game on the original hardware. Of the home console ports, the SNES is the clear winner here. If you’re playing the Arcade Kollection, I found the Xbox 360 version to be the most responsive. Playing on the 360 just felt much more natural and fluid compared to the PS3. The Genesis comes in the last place again.

Value: At the time of this writing, the original version of Mortal Kombat II is not readily available on modern systems. the Arcade Kollection will run about $10.00 and includes the first three games in the series. At this prince, that is an excellent value.

Overall score (1-100): 100 – Mortal Kombat II is a classic arcade brawler that ranks right up there with Street Fighter II (with neither one coming out as a clear winner). It improves upon the original in nearly every way.