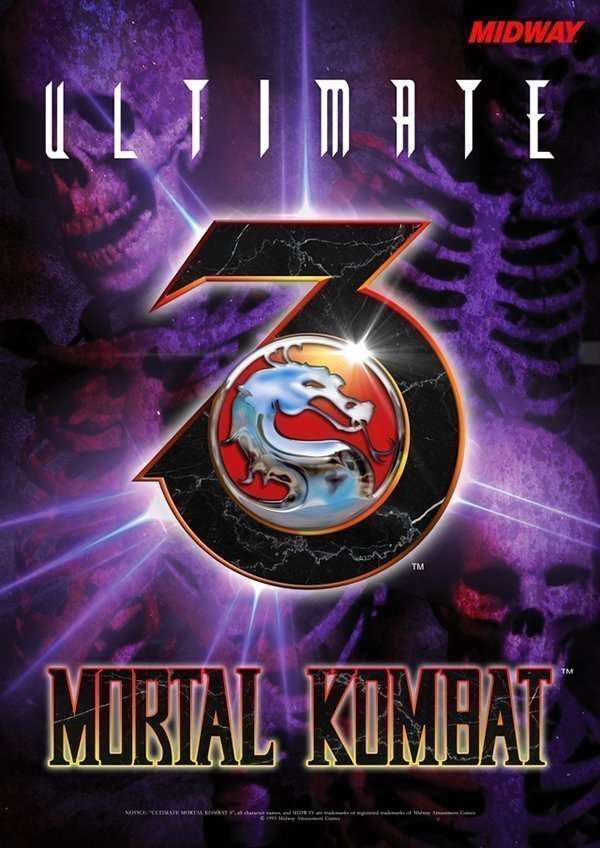 Continuing on with my reviews of classic arcade brawlers, I am brought to the third entry in the Mortal Kombat series, Mortal Kombat 3. As you might expect, this game retains a number of gameplay elements from the first two games in the series, but it also introduced several new mechanics to help it better compete with it’s main rival at the time, Street Fighter Alpha. Before diving into what’s new, let’s take a moment to discuss the storyline behind this new entry in the series.

Like it’s predecessor, Mortal Kombat 3 makes a few assumptions about the previous game in terms of lore. First, once again, the canon outcome of Mortal Kombat II sees Liu Kang as winner of the second Mortal Kombat tournament, thus saving Earth from being overtaken by the Outworld. The Mortal Kombat 3 story also indicates that in the aftermath of the previous game, the fighter known as Jax is successful in his mission to free the captive Sonya Blade from Shang Tsung’s forces. In doing so, he also locates the whereabouts of the criminal, Kano. But during his attempt to return Kano to Earth to be held accountable for his crimes, Kano manages to escape into the Outworld where he enlists as a member of Shao Kahn’s forces.

After having lost two Mortal Kombat tournaments in a row, Shao Kahn doubles down on his desire to take over the realm of Earth. In his rage he hatches an ingenious plan. Using forbidden magic, he resurrects the spirit of his long-deceased queen into the body of a human woman from Earth. In accordance with divine law, Queen Sindel’s resurrection allows Shao Kahn to enter the Earthrealm so that he can reclaim his lover. Of course, in doing so, Shao Kahn takes the opportunity to unleash his legion of demons onto Earth. The realm of Earth is largely decimated as a result of the invasion. In attempt to reverse the damage done by Shao Kahn, Raiden (one of Earth’s protective deities) uses his divine influence to shield several of Earth’s greatest warriors from destruction. Once the dust is settled, he urges them to challenge Shao Kahn’s warriors – knowing that if Shao Kahn can be defeated, the horrors of his invasion will be undone.

Ultimate Mortal Kombat 3 brings back the following characters from previous entries in the series: Liu Kang, Kung Lao, Jax, Sonya Blade, Kano, Shang Tsung, Sub-Zero, Smoke, Scorpion, Reptile, Jade, and Kitana. For the most part playing these characters will feel familiar to fans of the earlier games. But a few characters have special moves that have been updated to match up with the current game lore.

Nightwolf – A Native American medicine man/warrior.
Stryker – An NYPD SWAT officer, who managed to survive the invasion.
Sektor – A cybernetic ninja who is tasked with hunting down Sun-Zero (who after the events of the last game, left his clan).
Cyrax – A second cyber-enhanced ninja.
Kabal – A reformed member of Kano’s Black Dragon cartel.
Sindel – Shao Kahn’s resurrected queen.
Sheeva – Sindel’s bodyguard and loyal servant to Shao Khan.

The game also includes three characters that are unlockable via secret code:

The Original Sub Zero, Mileena, and the mysterious Ermac (a character born out of urban legend).

Motaro – An evil centaur who serves as Shao Kahn’s protector

Noob Saibot – Once again included as a secret opponent.

Finally, before moving on into a review of the game itself, I feel this would good time to mention the third and final variant of the game: Mortal Kombat Trilogy. This version of the game is exclusive to home consoles and brings back every character from the first two games. It also introduces a brand new character known as Chameleon. While these changes are certainly welcome and make Mortal Kombat Trilogy a great choice when it comes to playing a wide range of characters, it is considered non-canon. On top of that, the inclusion of some legacy characters seems to have been done with little thought in terms of game balance. This results in a game that often times feels patched together, with some characters vastly overpowering others. While I own a copy of Mortal Kombat Trilogy, I personally prefer Ultimate Mortal Kombat 3. 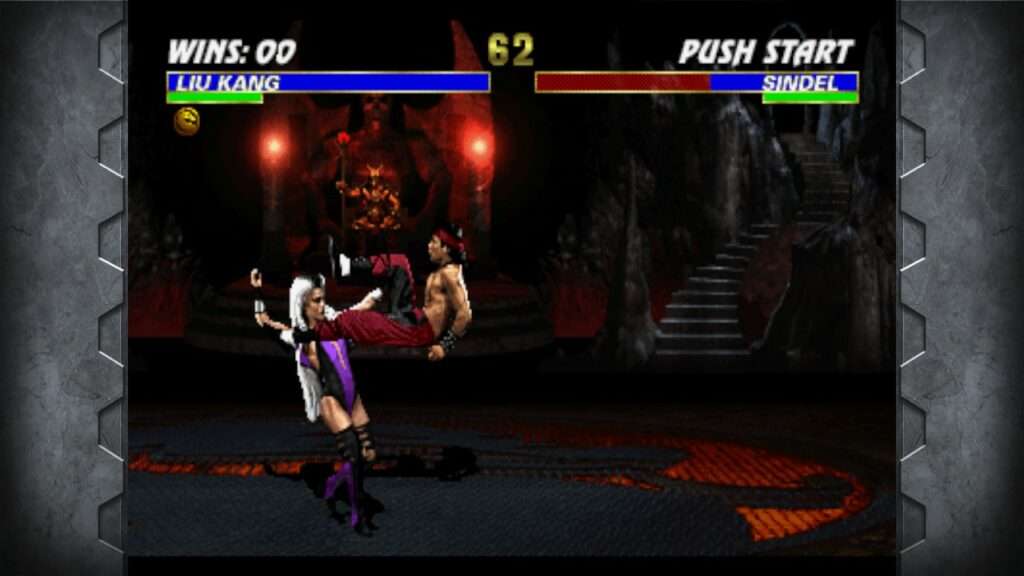 Ultimate Mortal Kombat 3 will immediately feel familiar to fans of the series. Every staple from the first two games are present in this entry; special moves, finishers, etc. This time around we have the addition of a new “chain-combo” system, level specific attacks (ie: pummeling opponents through walls), a “dash” feature, and even two new finishing options: mercy and animality.

When defeating an opponent two rounds in a row, players will have the option to perform a “mercy” technique which actually restores a small amount of life back to their opponent, allowing them to fight on. The “animality” technique is a new finishing move in which a fighter transforms into a animal, usually followed by their opponent being ripped to shreds. Both of these new options are not meant to be ground-breaking in any way, but merely exist to provide players with new amusing ways to humiliate the losing opponent.

Once again, this new entry in the series also brings a slight improvement in both graphics and sound. While this is certainly welcome, the impact is much less noticeable here than it was between the first two games in the series.

Also worth mentioning is the introduction of a 2-on-2 mode. This mode of play allows players to select two fighters instead of one. It is very reminiscent of the “endurance” levels seen towards the end of the original Mortal Kombat‘s first player scenario. At first it sounds like this addition would have the potential to a very groundbreaking change. But in practice, this mode of play didn’t end up being particularly popular with fans. Even so, its inclusion is certainly welcome. 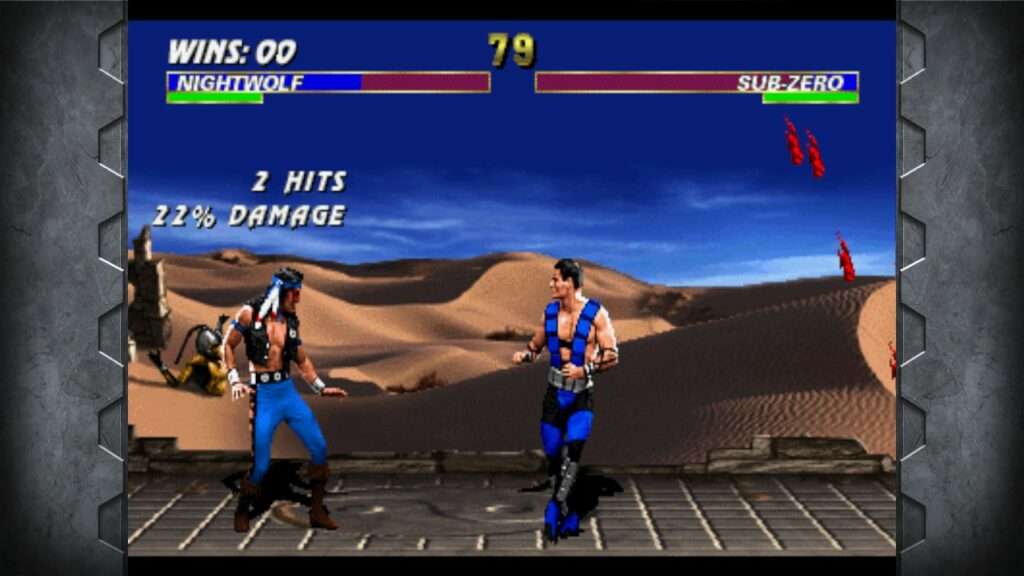 Of the three original Mortal Kombat titles, I do have to declare Ultimate Mortal Kombat 3 to be my favorite. It boasts an impressive roster of playable fighters, several new game modes, and a slew of hidden secrets to master. That being said, I do feel that it lags a bit behind Street Fighter Alpha in terms of bringing new gameplay to the table. But, in doing so, it also manages to remain simple and easy to play.

Sadly, if you want to play this game today you’re going to have a pretty tough time getting your hands on a copy. Unless you’re inclined to spend several hundred dollars for the mini-cabinet that’s currently for sale at Wal-Mart, you’ll need to get your hands on a copy of the Mortal Kombat Arcade Kollection for ps3, Xbox 360 or PC. The next best option is the original PC port which is currently available on GOG. As with all of my other Mortal Kombat articles, I used the version included with Arcade Kollection on the Xbox 360 for my review.

If you do manage to snag a copy of the above mentioned Kollection, be prepared for a largely single player experience. Because unless you a have a friend in the same room, you’ll likely be playing it alone. Neither the PC, PS3, or Xbox 360 versions have an active online community. So even though the option to play online against another person exists, there’s rarely anyone else online.

All in all, Ultimate Mortal Kombat 3 is an excellent example of a classic fighting game. While it lacks some of the frills and presentation seen in the rival Street Fighter franchise, it holds on the elements that made Mortal Kombat popular in the first place. It’s the entry that I recommend for modern day brawler fans who want a glimpse at how the series began. 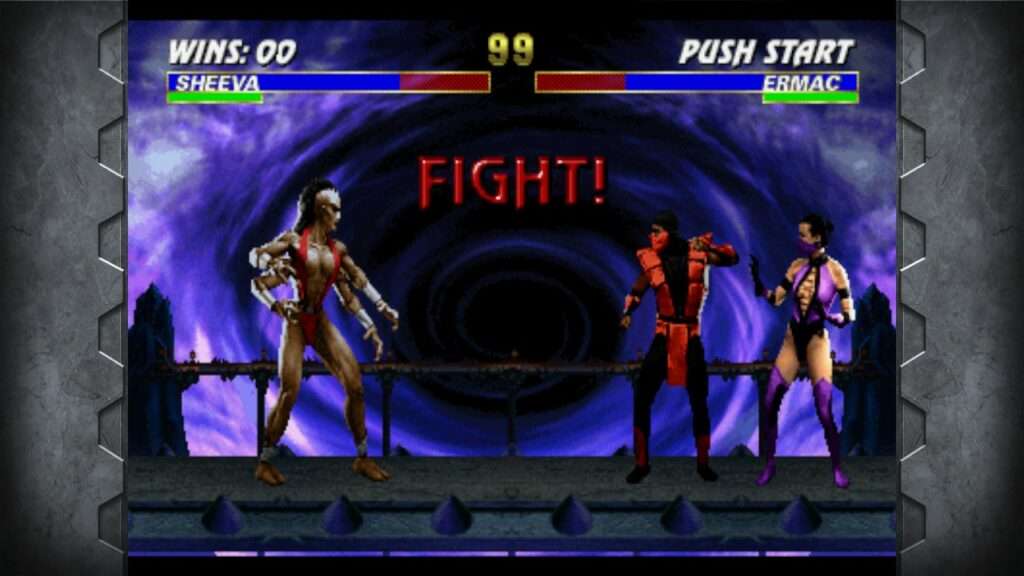 Difficulty: Hard –  Of the original three games, Ultimate Mortal Kombat 3 is often viewed as the hardest. The AI often pulls cheap moves and doesn’t hesitate to exploit nearly any opening you might give it. Mastering this game will require patience and a solid understanding of the character that you are playing. Of course, when playing against another person, the challenge you face will vary depending on the skill of your opponent.

Story: This game continues to build from the arc set up by the first two titles. While storytelling is not a major focus for games such as this. The Mortal Kombat franchise does an admirable job of incorporating lore and backstory into the games.

Originality: Mortal Kombat 3 continues the trend of taking the best from previous games and adding a number of slight refinements. MK3 does include a number of new features, but I’m not really sure if what was added is enough to make the game stand out among the competition.

Soundtrack: The music in Mortal Kombat 3 has a much higher energy and faster pace than either of the games that came before it. The music is appropriate and fitting, but none of the tracks really stand out to me.

Fun: Even now, decades later, Mortal Kombat 3 is still a crowd-pleaser. It’s great for parties or even if you just want to kill a half an hour with a friend.

Graphics: Mortal Kombat 3 still manages to look impressive even by today’s standards. At the time of its release, it was top of the line.

Playcontrol: Nothing will ever beat playing this game on the original hardware. Nearly all of home console ports of the day play decently well. But they all lack the polish seen in the home releases of both Mortal Kombat and Mortal Kombat II. With this in mind, the Arcade Kollection is the best way to go for playing this game at home. If you’re able to get your hands on a copy of the Arcade Kollection, I found the Xbox 360 version to be the most responsive. Playing on the 360 just felt much more natural and fluid compared to the PS3.

Value: At the time of this writing, the original version of Ultimate Mortal Kombat 3 is not readily available on modern systems. the Arcade Kollection will run about $10.00 and includes the first three games in the series. At this prince, that is an excellent value.

Overall score (1-100): 85 – Ultimate Mortal Kombat 3 is a classic arcade brawler that is sure to please fans of the series. It takes all of the great aspects from the previous games and adds a little more polish. However, when going head to head with other arcade brawler of the time, it manages to come up just a little short.