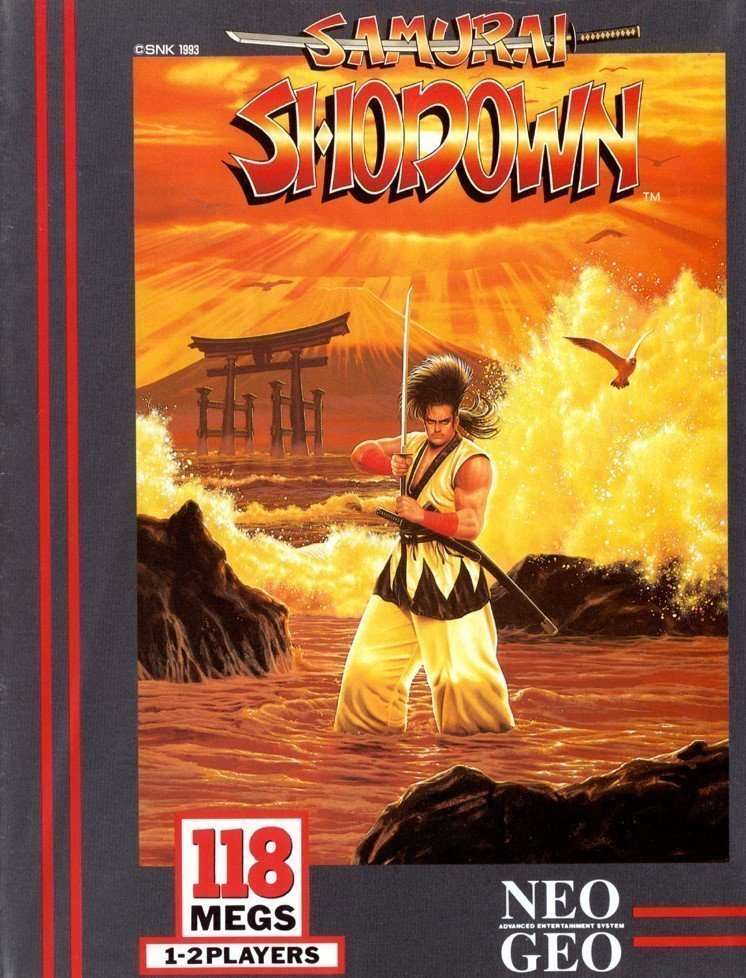 Before I move on to the next entries in the Mortal Kombat and Street Fighter series, I want to backtrack just a bit and discuss another fighting series that’s not quite as well known. The game in question is Samurai Shodown. Originally released in Japan as “Samurai Spirits” by SNK, this game attempts to capitalize on the arcade brawler craze by offering familiar gameplay, but with a unique twist.

Just like other fighting games that came before it, Samurai Shodown allows players to pick from a roster of characters, each with their own playstyle and set of special moves. What makes this game a little different from the competition is the inclusion of weapons. That’s right, each character in the game has their own physical weapon that they use when doing battle against their opponents. And yes, it is possible to drop your weapon, which puts your character at a severe disadvantage.

The storyline for Samurai Shodown is a strange mix of both fantasy and real history. The game takes place in the 18th century and follows the story a powerful Japanese warrior named Shiro Amakusa. Amakusa is murdered by an opposing shogun but brought back to life by the dark god, Ambrosia. In exchange for his resurrection, Amakusa agrees to obtain a magical stone that has the power to summon Ambrosia to the physical word. It is during this time that the world falls into darkness. But amidst this chaos several warriors appear, some motivated to restore balance to the world, others for their own personal gain. 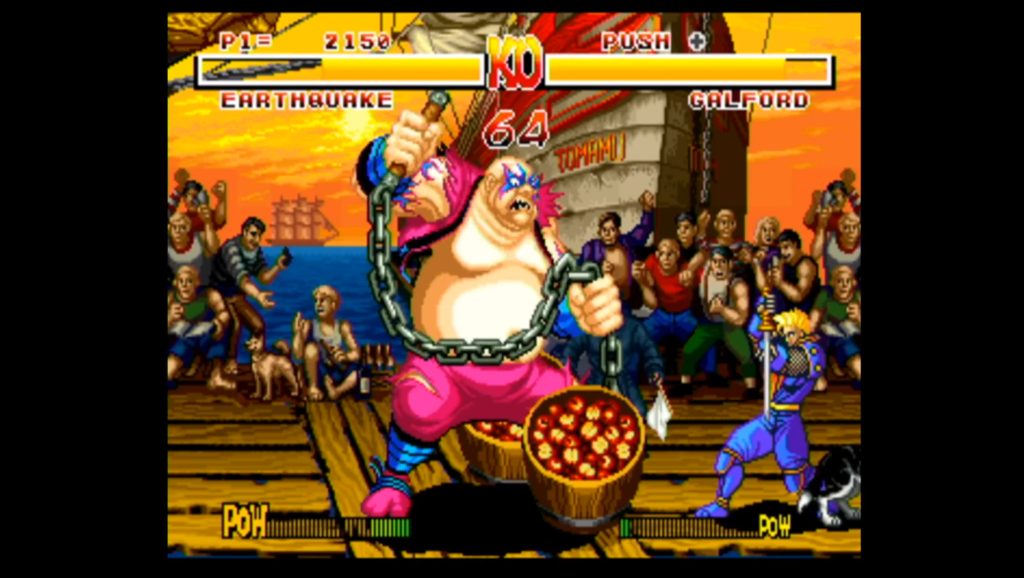 The list of playable characters in Samurai Shodown is as follows:

Haohmaru – Often considered to be the main hero in terms of canon-lore. Haohmaru is a ronin samurai. His weapon is a katana.
Gen-An – A strange mutant-like ninja who follows the path of darkness. Gen-An’s only goal is to increase his own power by slaying as many enemies as possible. His weapon is a glove of sharpened knives.
Galford – An American and son of a murdered marshall. Galford joined the crew of a seafaring vessel that made its way to Japan. There, he learned martial arts and uses his knowledge as a force of good. He is accompanied by his dog, Poppy. His weapon is a sword.
Ukyo – A brave warrior who has been diagnosed with a life-ending disease. He travels the world in search of the “perfect flower” to present to his one true love before he dies. He wields a custom-made sword.
Charlotte – A Frenchwoman and master fencer. Her goal is uncover the chaos that is overtaking the land she calls home. When her investigation leads her to Amakusa, she vows to do all she can to defeat the evil surrounding him. Charlotte’s weapon of choice is an epee.
Tam Tam – An Aztec warrior who seeks to find the magical stone stolen from his tribe by Amakusa. His weapon is an over-sized blade.
Earthquake – An American brawler who studied forbidden martial arts in Japan. He is a bandit who’s only desire is to rob and pillage. He wields a Kusarigama.
Nakoruru – A young priestess who draws her power from nature. She fights to bring back balance to a world decimated by Amakusa’s forces. She does battle with a holy sword.
Wan-Fu – A Chinese warrior who’s main goal is to recruit warriors for his army. Wan-Fu does battle using a Chinese saber.
Jubei – A ronin-for-hire. His current mission is to travel the world hunting demons. Jubei is armed with both a katana and a wakizashi.
Hanzo – A kind-hearted ninja. Hanzo is currently searching for his son from the clutches of Amakusa’s army. He attacks his opponents with a ninjato blade.
Kyoshiro – A kabuki performer. Kyoshiro is traveling artist and warrior. He does battle with a naginata.

Amakusa –  In most versions of the game Amakusa is not playable character, but rather the final boss of the single-player scenario. He is a resurrected wizard and ruler of the demonic army. His weapon is a magical orb. 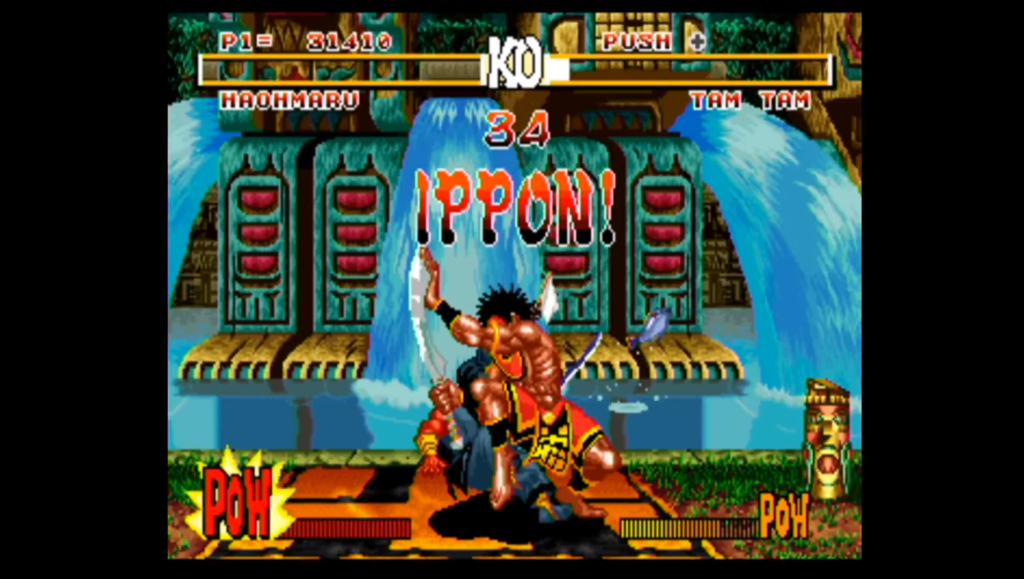 Like most two-player fighting games of the day, each character has their own unique stage that matches up with their background story. One minor aspect that makes Samurai Shodown unique, is the inclusion of a referee. As players do combat with one another, the referee is always present in the background waving flags signaling hits and misses. While this is not a particularly groundbreaking inclusion, it’s a nice little touch.

In fact, it’s these “small touches” that really enables Samurai Shodown to compete with other big players in the fighting game arena. While a lot of what the game has to offer has been seen before, it’s the unique refinements that really give the game its character. A good example of this is the “Rage Meter” (sometimes known as the Power Bar). Each character has a special gauge at the bottom of the screen. Each time they take damage from their opponent, the meter fills up a bit. Once the gauge reaches the max, the character will enter “rage mode”. During this time, their attacks do significantly more damage. Another small addition that Samurai Shodown provides to the genre is the inclusion of a “delivery man” that appears from time to time during matches. This background character will often run across the screen dropping items that will either harm or help a player that touches them. While this may seem like a minor detail, it actually adds a whole new dynamic that can really change the tide of a battle.

It’s easy to see how Samurai Shodown does a fantastic job in carving out its own niche in an already crowded genre of games. But for all that it gets right, there are also some pretty big imperfections. Namely, the playcontrol. For a game that’s intended to be a fast-paced battle title, the playcontrol has a really stiff feel to it. The characters just don’t seem to have the same agility and maneuverability as expected with this type of fighting game. At least not to me. This problem only seems to get worse when playing the home ports.

I first encountered this game when I was a teenager. My local movie theater had a Neo Geo arcade machine that was loaded with Samurai Shodown. Having recently moved back to the US from Japan, I found nearly everything about the game appealing. From the characters to the traditional Japanese music that is present in some levels, Samurai Shodown is a game that really spoke to me.

While there was both a Sega Genesis and SNES port of the game, neither of them were truly able to capture the same feel as the original arcade cabinet. For the longest time, the best way to enjoy this game today is through the Samurai Shodown Anthology. This collection includes the first six games in the series. However, even it may be a little difficult to find. This release is only available on the PS2, PSP and Wii. Today, the game is available as a downloadable title on the Nintendo Switch, PS4 and Xbox One. This version of the game is a straight port of the original arcade ROM. For this review, I played the arcade version on the Xbox One. 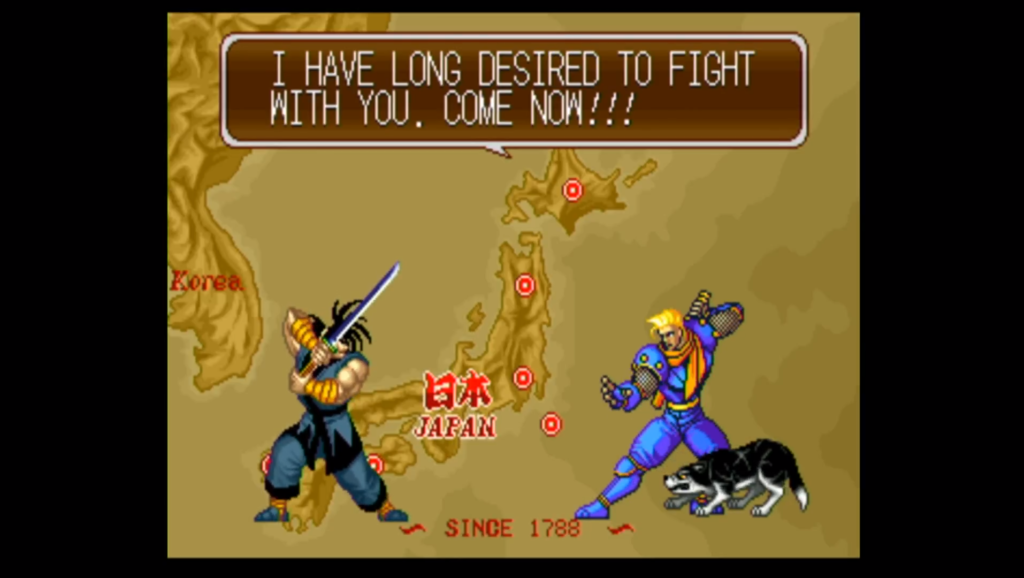 Difficulty: Hard –  This game has a reputation for being rather difficult. But once you have a little practice, it’s not too difficult to learn how to bait the AI and come out on top. Even so, it’s no walk in the park when compared to other fighting games. Of course, when playing against other players the difficultly level will vary depending on the skill of your opponent.

Story: Like most fighting games, Samurai Shodown has both a backstory as well as a loose plot-line for each character. The mix of real world history and fantasy also help to provide a fascinating touch.

Originality: In truth, Samurai Shodown is very much a clone of other fighting games. But, it tries to stay fresh by introducing a few novel concepts like weapons and power-ups.

Soundtrack: This is probably my favorite thing about the game. For the most part, a majority of the game’s soundtrack is made with traditional Japanese instruments and melodies – and it sounds great! On top of that, the game includes quality voice acting in the original Japanese. In my opinion, this gives the game a unique vibe.

Fun: If you enjoy fighting games, there’s plenty to love about Samurai Shodown. It’s a fast-paced brawler with a unique feel. Some players may find the single player scenario a bit too challenging for their tastes, however.

Graphics: Samurai Shodown is somewhat reminiscent of Street Fighter II in terms of art direction. The graphics are nearly on par, but sometimes even manage to eek past the competition.

Playcontrol: I’ll be honest, nothing is going to beat playing this on a real Neo Geo cabinet. But even then, controls have a pretty rigid feel – which is odd for a game marketed as “high speed combat”. If you cannot play the game on the original hardware, the next best experience is going to be the standalone release or the PS2/Wii version of “Anthology”. If playing on the Wii, you’re going to want to use the pro controller. Last place goes to the PSP version just due to the controller comfort alone. Regardless of which version you choose, the controls are well thought out and fairly responsive. But the action when controlling your character just seems off.

Value: The best value is found in the Anthology version of this game, which nets you six games for a single price. The Wii or PS2 version can usually be found for around $25. The PSP version is harder to come by and will likely cost considerably more. For this reason the Wii or PS2 is the way to go in terms of value.. No matter what, six games for under $30 is a steal. But these days, the Anthology is out of print. Thankfully, the game is available by itself for around $8.00 as a downloadable title on the Switch, Xbox One and PS4.

Overall score (1-100): 65 – Despite a number of fun and unique aspects, when pitted against similar games of the age, Samurai Shodown doesn’t really offer enough to come out ahead. Personally, I enjoy this game quite a bit. But if I’m being honest, it’s likely not as appealing as either Street Fighter II or Mortal Kombat.