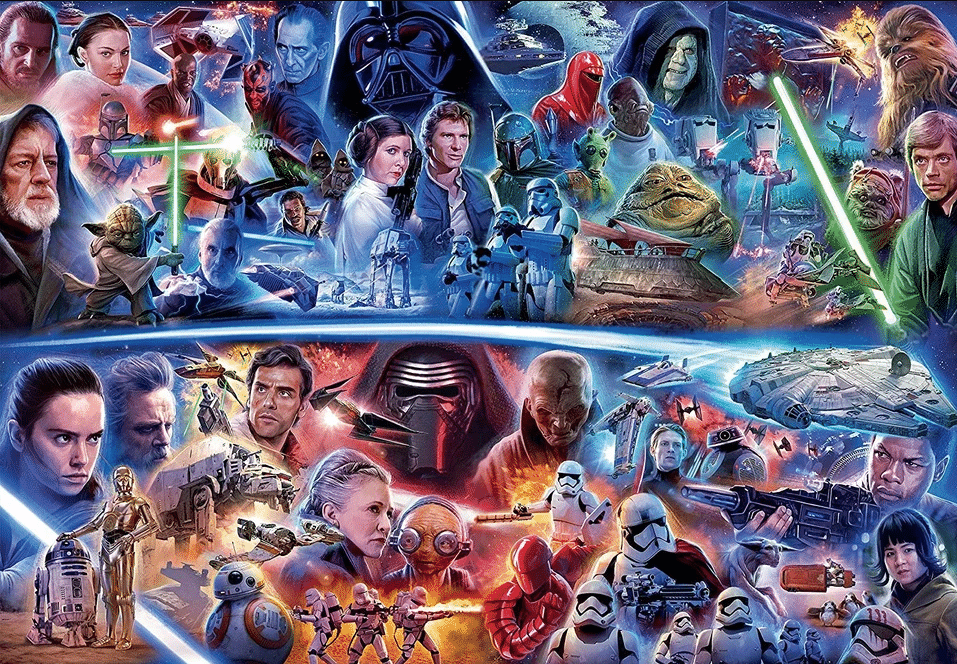 Warning: The following post is very spoiler heavy with regards to Star Wars: The Rise of Skywalker!

So now that Episode IX has been out for a few days, I want to share my thoughts on the conclusion of the Skywalker Saga.

Before I begin, let me take a moment to discuss my personal experience with the Star Wars films and why I’m so passionate about them. One of my earliest memories is sitting in a dark movie theater, staring up at the end scene of The Empire Strikes Back. Of course, being born in 1978, Empire came out when I was just two years old. Naturally, I don’t really remember anything about the theater experience itself. But I do remember that last scene of Luke Skywalker standing at the window, looking out at the vast expanse of stars in front of him. That one visual really stuck with me throughout my early childhood. Years later, around the time I was starting Kindergarten, the original 1977 Star Wars film premiered on HBO. I have vivid memories of sitting on the living room floor in my pajamas, eating Lucky Charms out of a tupperware bowl and watching Artoo Detoo getting zapped by jawas. From that moment forward, I was hooked.

For a large portion of my childhood years, Christmas mornings meant a slew of new Star Wars toys. And let me tell you, I had nearly every one. Kenner action figures, space ships, play sets, you name it. I even had the original Admiral Ackbar and Emperor figurines that were only available via mail order. Even then, my obsession for collecting was rearing its ugly head. Of course, as I grew older, my passion for toys died. But my love for Star Wars did not.

Often times I wondered to myself why George Lucas decided to tell only the fourth, fifth and sixth chapters of the Star Wars story. As a child, I held out hope that I might one day see the original three episodes on the big screen. But by the time I had reached my teens, I had all but given up. Then the impossible happened, the Star Wars prequel trilogy was announced!

I was one of the first in line to see Episode I: The Phantom Menace. And at least where I lived, it was a spectacle like you couldn’t imagine. The movie theater was packed to the gills with movie-goers – and not just kids, but grown adults. Many of which were wearing costumes or swinging plastic lightsabers around like sugar-fueled ten-year-olds. When the lights dimmed and that familiar fanfare blared from the speakers, the entire theater erupted in applause.

By the time the movie was over, I remember feeling a bit puzzled. I mean, I was elated to see a new chapter of Star Wars on the big screen again, and there was plenty about the movie that I thoroughly enjoyed – but a part of me was wondering just what George Lucas was thinking. For example, the child who played Anakin Skywalker was obviously an untrained actor. Of course, he was a very young, but I’d seen child actors in other films who were much more talented than this little fellow. For a big budget production like Star Wars, I couldn’t for the life of me figure out how such a poor performance could end up getting the green light. But questionable acting aside, there were other oddities that struck me about the movie. Namely, Jar Jar’s obnoxious voice, the toilet humor, and and few other nit-picky things. But in the end, I was able to accept it for what it was and I was happy. Thankfully, as the next two episodes rolled out, I personally found them to be much more enjoyable. I know lots of people take issues with the prequels, but I’ve always felt that both Attack of the Clones and Revenge of the Sith were very well done films. When it was all said and done, I had no real complaints with the six-film saga.

What followed next was a weird time for Star Wars fans. It seemed for all intents and purposes that we would never see another Star Wars movie again. Sure, we had books and various animated series. But it just wasn’t the same. Then, out of nowhere, fans were blindsided by the unexpected announcement: George Lucas was selling Star Wars to Disney and a new trilogy of films were going to be made.

When the seventh film finally arrived, I was beyond impressed. The Force Awakens was everything I had hoped for and more. I absolutely love that movie. In fact, it’s one of my favorite entries in the whole series. Of course, a very vocal portion of the fanbase disagrees. To say that the internet was rough on the new Star Wars movie would be an understatement. In fact, certain elements of the fanbase were downright toxic. Even though I largely dismissed the hate spewed towards The Force Awakens, I did have to agree with some of the venom directed at the next entry in the franchise. The Last Jedi, is probably the most problematic film for me. Not only does Luke Skywalker seem to behave very much out of character for most of the film, but the whole subplot involving Finn and Rose is completely pointless and does nothing to drive the story whatsoever. Despite these two main issues, I can get behind nearly every other aspect of the movie. The premature killing of Snoke and Phasma are just fine as far as I’m concerned. Luke sacrificing himself to the force for the greater good is also no issue to me. Oddly enough, these points seem to be the straw that broke the camel’s back for a large number of fans. Personally, I don’t see it. Warts and all, The Last Jedi still ends up being an acceptable entry in the series as far as I’m concerned.

So that brings us to the newest and final entry in the series, The Rise of Skywalker. This movie has the nearly impossible task of providing closure to a nine-film series that has spanned over four decades of pop culture. No matter what story is told or what artistic choices are made, someone is going to be unhappy with something. So what do I think?   –  I loved it!

Let’s start with the opening crawl:

“The dead speak! The galaxy has heard a mysterious broadcast, a threat of REVENGE in the sinister voice of the late EMPEROR PALPATINE…”

Wow! What a fantastic way to start the story. Naturally, nearly everyone knew that the Emperor was returning for this entry of the series. But I really didn’t expect it to be done in this way. I figured they would hem and haw until the last act and then spring it on everyone. Nope. Old Sheev is introduced in the first ten minutes – and in a very intriguing way as far as I’m concerned.

One big complaint that The Rise of Skywalker received is the pacing of the film itself. It moves fast. There’s not really a dull moment. That goes for both the action on the screen and the storytelling. And that’s really saying something considering the movie is two and a half hours long. In truth, the movie does feel a bit rushed in terms of plot. But again, keep in mind, we are wrapping up a trilogy of trilogies. There’s so much story to tell, so many loose ends to tie up and only an acceptable window of time in which to do it. I personally would love to know how much footage ended up on the cutting room floor. I have a feeling the novelization for the film is going to provide plenty of juicy background info that we just weren’t able to see on the big screen.

Another complaint that I’ve heard is how much of Carrie Fisher’s scenes and dialogue seem out of place. Again, this is somewhat expected considering all of the footage of her in this movie is made up of outtakes from the previous film. All in all, I think her role in the film was well done – even her ultimate fate. In my opinion, the death of Princess Leia in the final entry of the series is both fitting and appropriate. I know that a lot of people don’t like how her fate is tied into the redemption of her son, Ben Solo. But for me, I give it a thumbs up. From an artistic standpoint, I think it’s nothing short of fantastic. My only “Leia” complaint with Episode IX is the shoddy CGI version of Carrie in the flashback scene where a younger version of her is seen training with her brother. Her face looked waxy and pathetic. Disney can do better.

Finally, the last big gripe most people have has to do with Rey’s parentage. Of course, I’m talking about the reveal that she is none other than the Emperor’s granddaughter. I can understand why a lot of people dislike this. To be honest, it just doesn’t make a lot of sense. Was Emperor Palpatine married? Is Rey’s father some kind of funky test-tube baby? What exactly is going on here? I’m sure we will eventually learn the answer one way or another, but for right now it seems a bit over-the-top for many. Despite this, I’m actually quite fine with it. Yes, it seems like an odd choice on the surface. But from a storytelling standpoint, I actually like it. Star Wars has always been a story about redemption. No matter how far you’ve fallen, you can always make a conscious choice to turn over a new leaf and do what’s right. In Rey’s case, not only did she resist the temptation to accept her “rightful” place as Empress of the galaxy, but in the very last scene she actually doubles down on redefining her legacy by casting aside the name Palpatine and taking up the Skywalker name as her own.

There’s a thousand different ways this movie could have gone. And if you believe the rumors, we could have ended up with a plot involving Matt Smith as a young clone Emperor and the death of nearly every beloved character thanks to an exploding Millennium Falcon. Instead, we had a what was largely a return to form for older fans. Was that Disney playing it safe after the backlash from The Last Jedi? Maybe. But is that necessarily a bad thing? I don’t think so.

My biggest regret? I was really hoping to see both the prequel and the OT era come together in the form of a ghostly Anakin and Luke interacting together in some way. But it wasn’t in cards. Instead we got to see Luke and Leia look on as Rey claims the old Skywalker homestead as her own – presumably to reestablish the Jedi Order. – I’ll take that.

All in all, I’m a satisfied customer.