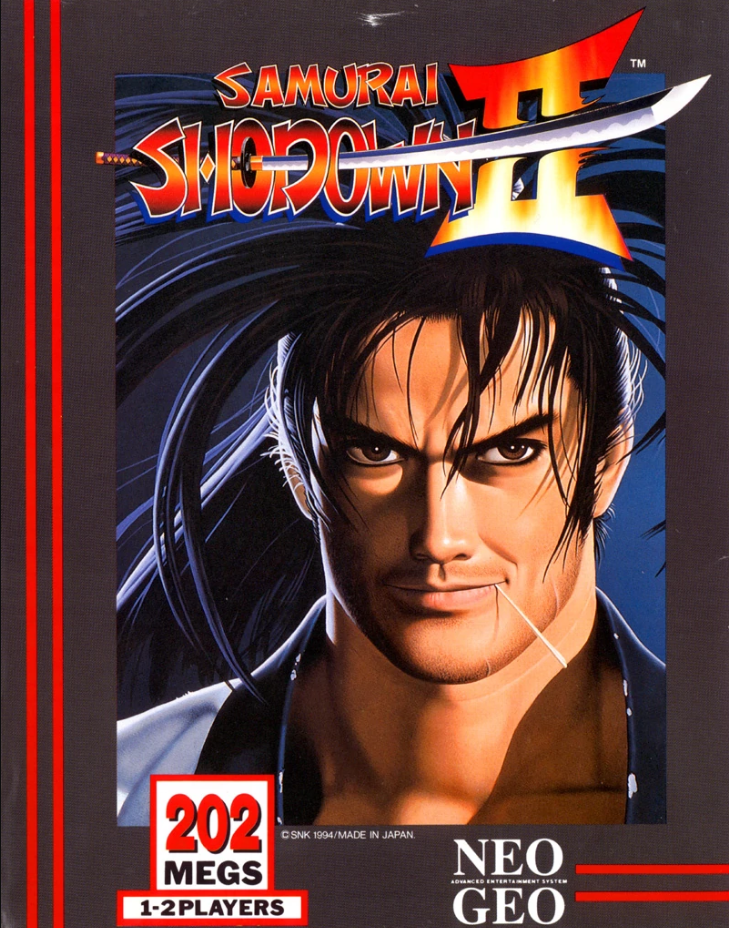 Having recently discussed the SNK fighting classic Samurai Shodown, I was eager to follow up that review with an in-depth look at its sequel. Simply named Samurai Shodown II, this game takes everything good about the original title and improves on it in almost every way.

Taking place a year after the first game, Samurai Shodown II again sees a cast of characters doing battle against each other for a variety of reasons. The storyline for this game is a little more obscure than that of the original, but the basic gist is as follows; Since defeating Amakusa and thus banishing the evil spirit of Ambrosia from Earth, the samurai known as Haohmaru has found himself the target of an mysterious assassination attempt. After consulting his old master, he learns that dark forces are still at play upon the land of men. With this knowledge in mind, he sets forth on a new quest against evil.

All of the characters from the original game (with the exception of Tam Tam) return as playable characters here, albeit with some minor changes. Samurai Shodown II also introduces the following characters to the roster:

Genjuro – Haohmaru’s lifelong rival. Despite being trained by the same master as Haohmaru, he took a different path in life. Genjuro is a brutal mercenary who wields a legendary katana.
Nicotine Caffeine – A wizened old monk who was sensei to both Haohmaru and Genjuro. He does battle using a holy staff and magical cards.
Cham Cham – Tam Tam’s younger sister. After Tam Tam’s defeat in the original game, he was transformed into a monkey by the gods. Seeking to redeem her brother, she sets out in search of the same magical stone that lured her brother into battle during the first Samurai Showdown. Her weapon is a giant boomerang.
Sieger – A noble knight from the Kingdom of Prussia. His quest to hunt down the demons that infest his home country has led him to Japan. His weapon is an over-sized gauntlet.

Mizuki Rashojin – The final boss of the single player game. Mizuki is a priestess who has in league with the demon Ambrosia. She is currently on a campaign to resurrect her master and re-establish his power on Earth.

Kuroko – Kuroko is the name of the referee that officiates the battles in Samurai Shodown. In this game, he also serves as a secret contestant. When playing the single player game, he may randomly challenge players from time to time. In console version of the game he is also a playable character that can be unlocked once the game is beaten normally. 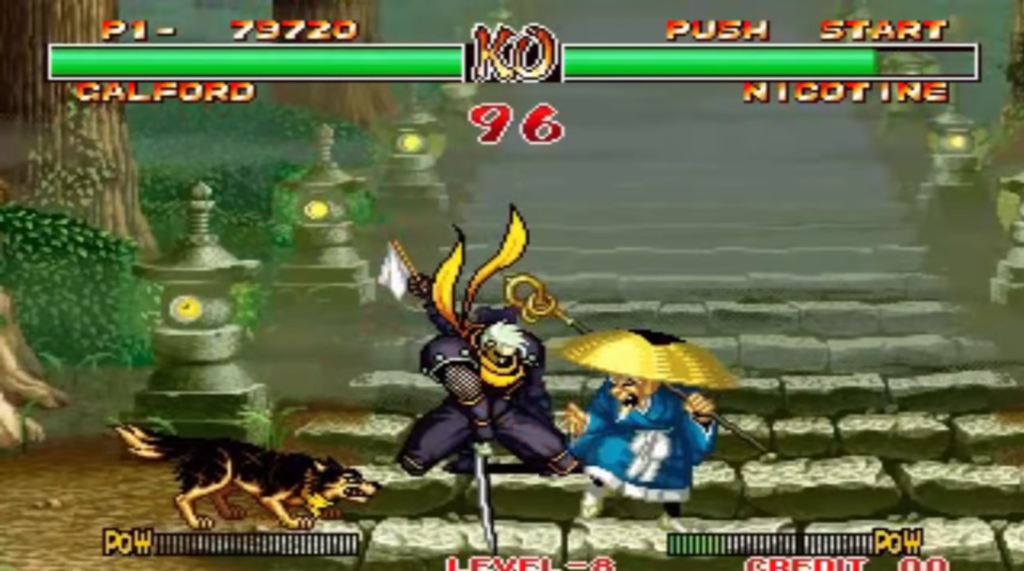 Nearly every aspect of the first Samurai Shodown is improved in this game. The expanded roster gives players a more diverse selection of characters to play, the playcontrol is revamped and much more fluid. And an overhaul of the Rage System makes the gameplay more much more engaging.

In the first game, when the Rage Meter is maxed out, your character’s attacks simply do a higher degree of damage. The same holds true in this game as well, but maxing out the meter also allows players to perform a “Super Special Move”. These special attacks not only deal considerable damage, but also break your opponents weapon temporarily. This significantly lowers their attack power. Often times, successfully executing a Super Move nearly guarantees victory.

Other changes include the ability for characters to now somersault, duck and perform a low-hop. Each of these movements make avoiding attacks easier and helps to make the battle in Samurai Shodown II more tactical instead of just being a pure button-mashing contest. This game also introduces a parry system that enables players to block attacks. When attacked, players can attempt to make an instant block. If successful, not only do they not take damage, but their opponent is rendered open to a counter-attack. This may not sound like a big deal, but the introduction of this mechanic really makes Samurai Shodown II a contender among its peers. This gameplay mechanic was also later incorporated in other fighting franchises and has since become a staple of the genre. 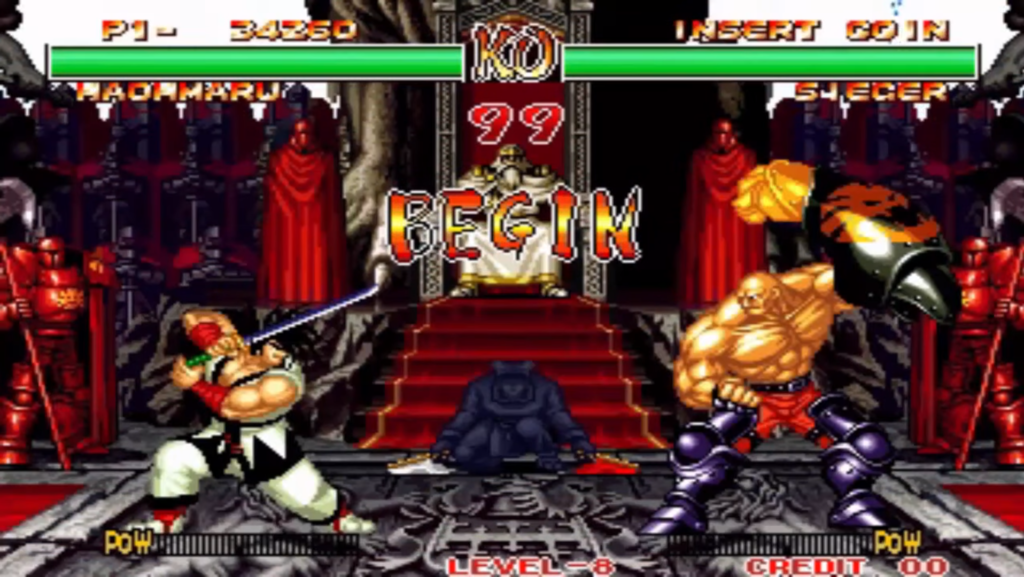 Originally released as an arcade game, Samurai Shodown II was also available on the Neo Geo AES system. Due to that system’s lack of popularity in the US, most players were only able to experience the game by visiting their local arcade. Japanese players, on the other hand, were fortunate enough to have a PS1 release. There was a PC port of the game released years later in the west, but by that time most players had turned their attention to other entries in the series.

It wouldn’t be until the release of the Samurai Shodown Anthology for the PS2, PSP, and Nintendo Wii that the game would be readily available for players in the US. If you have one of those systems, this is the version of the game that I recommend simply based on value alone. If not, these days the game is also available on PS4, Xbox One, and Nintendo Switch as a downloadable title. For my playthrough, I used the arcade port that is available on Xbox One version of the game.

If you liked the first Samurai Shodown game, you’re going to absolutely love this one. Even if you didn’t like the first game, but enjoy other arcade fighters from the era, this entry is worth your attention. 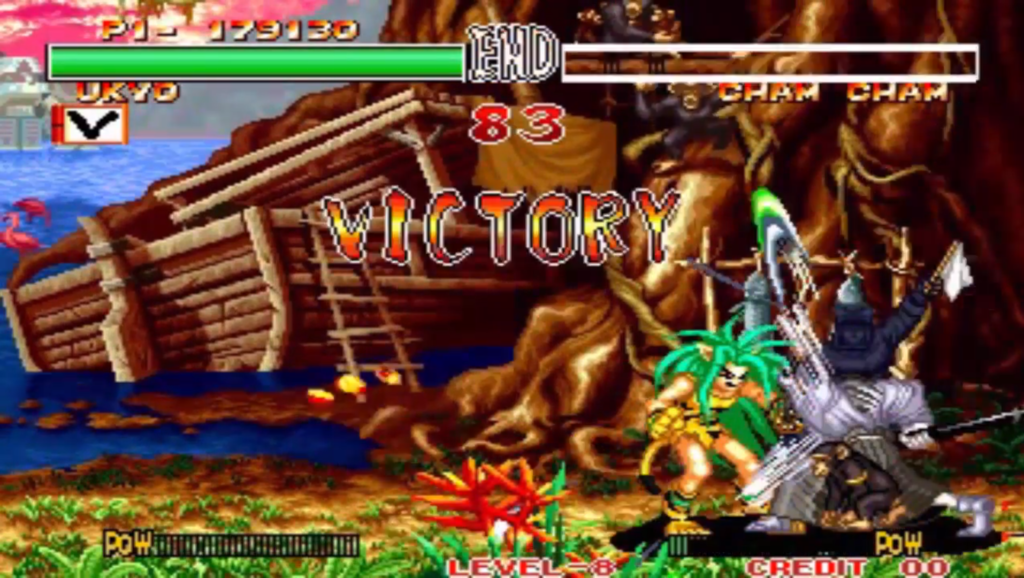 Difficulty: Hard –  In keeping with the nature of the first game, Samurai Showdown II‘s single player scenario is pretty rough. Perhaps it’s because I’m used to the feel of Street Fighter and Mortal Kombat, but to me this series has been much more challenging. As always, when playing against other players the difficultly level will vary depending on the skill of your opponent.

Story: The story for this game piggybacks off of the events from the first Samurai Shodown. For a fighting game, it is more than adequate. Personally, I find the backstories for the characters more interesting than the plot of the game itself. On a more specific note, the localization team really dropped the ball on this one. The English translation that appears at the beginning and end of the game is almost laughable. But, in a weird way, that’s actually just fine. It gives the game a funky foreign-film feel that’s oddly appropriate.

Originality: On the whole, Samurai Shodown II is very similar to other games in the genre. Most of the game’s original aspects come in the form of game mechanics and not so much in its presentation. When compared to its predecessor, it looks nearly identical on the surface. But as you play it, its subtle tweaks and refinements really begin to shine.

Soundtrack: Once again, the soundtrack and voice acting is just top tier. The music in this game continues the trend of using real authentic instruments and the composition is simply amazing.

Fun: I think nearly everyone would agree that this game is leaps and bounds better than the original. Personally, I think it stands on equal footing with other arcade fighters of the era in terms of entertainment value.

Playcontrol: This was my biggest complaint about the first game and thankfully, in this entry, it has been resolved. Samurai Shodown II feels much looser and responsive. This is critical for a game of this type. Of course, nothing is ever going to beat playing this game on the original hardware. But the home ports of the game feel intuitive and spot-on.

Overall score (1-100): 75 – This game is a huge step forward from the first Samurai Shodown. It looks great. It sounds great. And it even plays great. But when compared to the competition, it still falls just a little short. That being said, anime fans or fans of historical Japan will likely find the game’s setting very appealing.