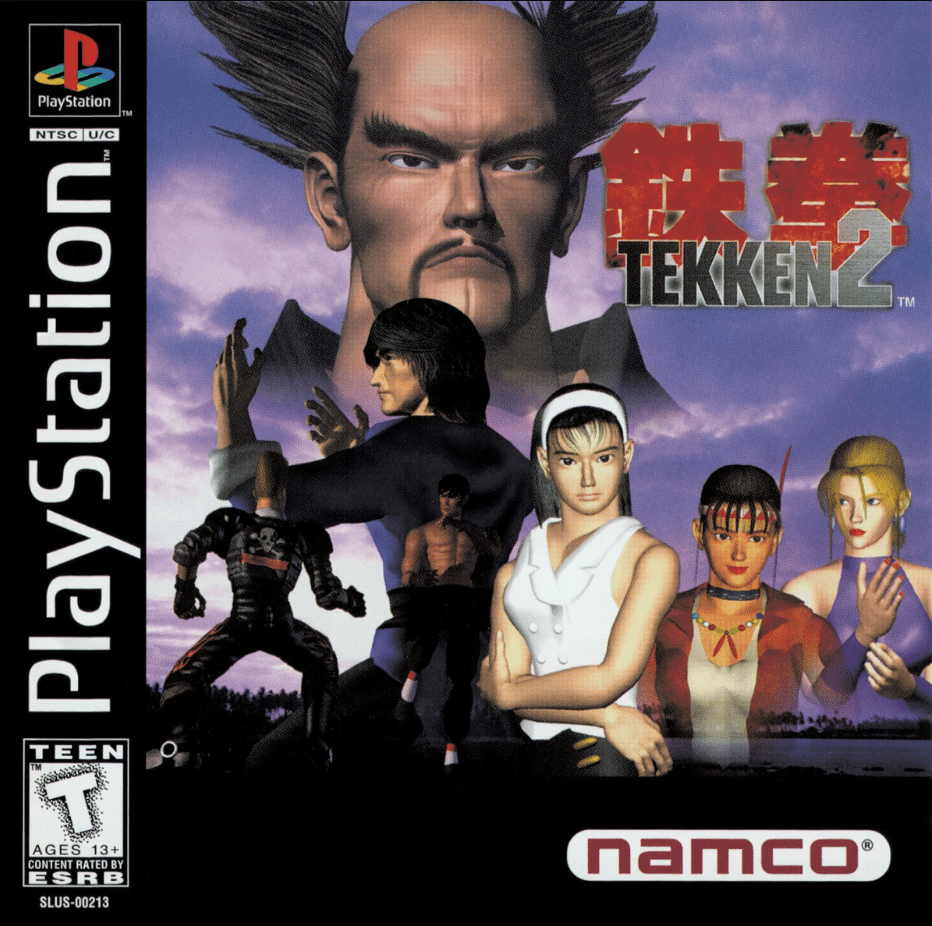 Before diving right into this review, I want to take a moment to wish all of my readers a very merry Christmas. While many people both young and old are spending time today exploring new games, books, and other delightful forms of nerdery, I am reveling in the joys of retro bliss. In the recent weeks I’ve spent a lot of time working on the current side project for this site, which (in case you haven’t been keeping track) is a focus on retro arcade fighters. Today, I’m going to share my thoughts on Tekken 2.

As was the case with the first Tekken game, Tekken 2 was originally released as a successful arcade cabinet. But it was the PS1 version of the game that most gamers are likely to remember. Just like the original game, the arcade release had a very limited number of playable characters. But the home version expanded the roster from a mere ten to a shocking twenty-five playable characters (a starting line up of ten with the additional fifteen being unlockable).

Tekken 2 takes place two years after the events of the original game. The storyline assumes that Kazuya was the winner of the King of the Iron Fist Tournament, having defeated his father Heihachi by tossing him over the edge of a cliff (just as Heihachi did to Kazuya before the events of the original Tekken). Heihachi survives the fall and goes into exile to plot his revenge. Eventually, he get his chance when news breaks out of a second tournament. Even knowing that this new contest is likely nothing more than a trap laid for him by Kazyua, Heihachi nevertheless enters in hopes to defeat his treacherous son and recapture his former glory. 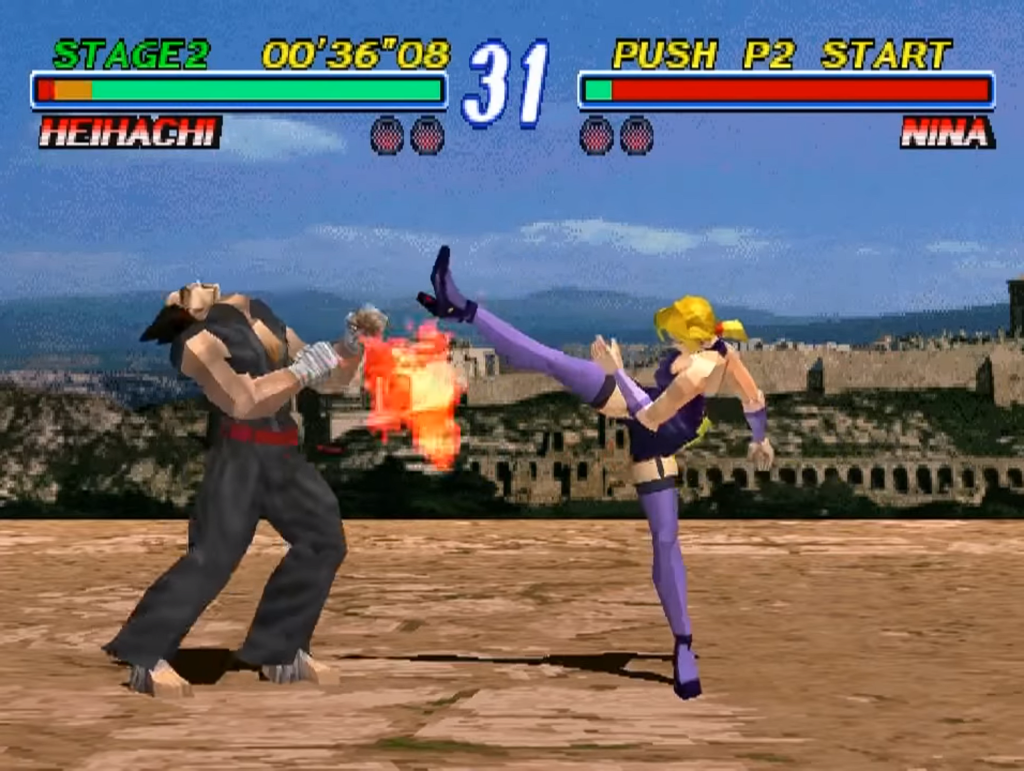 From the original game, the following characters return as part of the main playable roster: Yoshimitsu, King, Law, Nina, Michelle, and Paul. Heihachi is also added as a playable character in this game.

The following characters have also returned, but need to be unlocked before being added to the roster: Prototype Jack, Anna, Armor King, Ganryu, Kuma, Lee, Kunimitsu, Wang, and both Kazuya and Devil (who serves as the final boss of the game).

This game also adds the following to new characters to the mix:

Jack 2 – This is an upgraded version of the original Jack android. He has been redesigned specifically for the second tournament.
Lei – Lei is a police officer from Hong Kong who is assigned the task to bringing down Kazuya. He enters the tournament to accomplish this goal.
Jun – A mysterious government official who is also given the task to hunt down and arrest Kazuya.

The following new characters are initially locked-out of the starting roster, but can also be unlocked and added to the roster:

Roger – A kangaroo that was genetically enhanced as part of Kazuya’s secret para-military experiments.
Alex – A genetically modified dinosaur, also one of Kazuya’s sadistic experiments.
Angel – Much in the same way that Devil is a dark entity manifested by Kazuya’s soul, Angel is believed to be the opposite – a reflection of what little good may still be left inside of him.
Bruce – A deadly kickboxer who serves as one of Kazuya’s elite bodygaurds.
Baek – A renown martial artist who has entered the tournament to challenge Law. 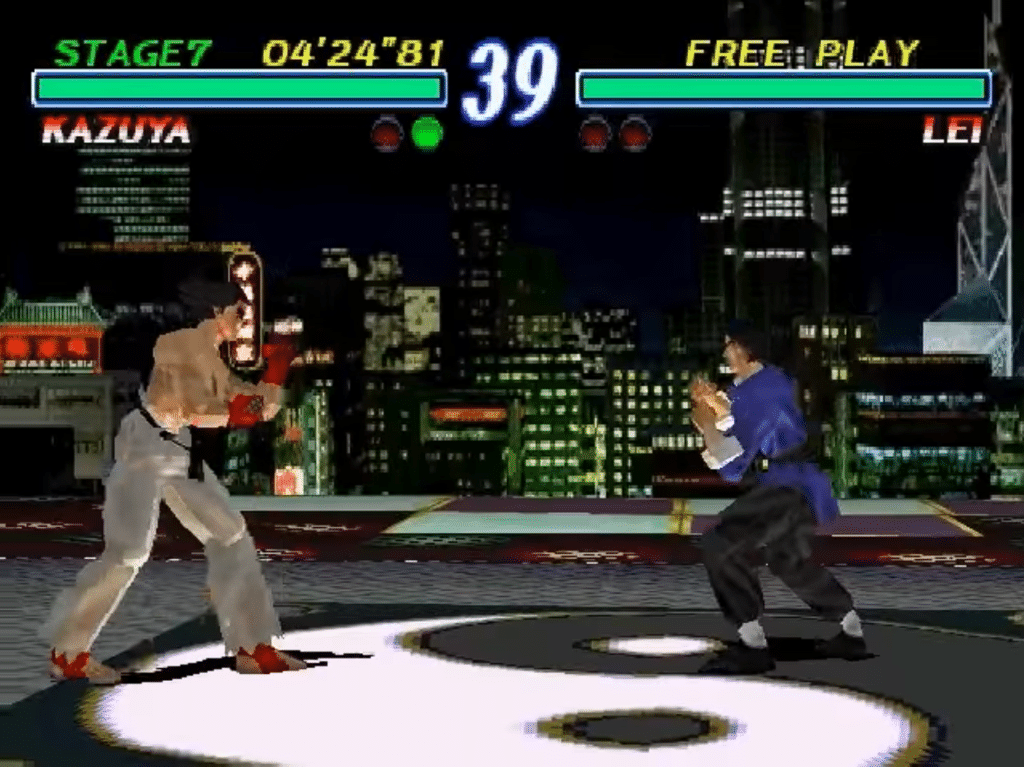 Tekken 2 takes everything about the original game and makes it even better. It retains the unique playstyle, while adding some graphical improvements and more strategic gameplay elements. For example, players can now execute counter-attacks, special chain attacks, and even a few sidestep maneuvers. What makes these added attacks unique is that they are character specific. This allows each individual character to stand out and helps the player find a fighter that is best suited to their own style.

Graphically, Tekken 2 offers a pretty striking improvement over its predecessor. While still blocky-looking, the overall polygons have a much smoother look to them. Several of the arenas also feature some very impressive lighting effects. Together, these elements really give the game a much richer look.

Arguably, the biggest change in the sequel is the inclusion of multiple game modes. Aside from the standard “arcade mode”, Tekken 2 also features Survival Mode, Team Battle, and Time Attack options. In Survival mode, players do battle against back-to-back opponents to see how many fights can be won before they are finally defeated. Time Attack is nearly identical to Arcade Mode, except the time it takes to complete each fight is recorded. Players are then able to play again in hopes of beating their own record time. Of all the new modes introduced, Team Battle is probably the most interesting. This mode is multiplayer only and allows each player to select up to eight warriors. From then on, it’s similar to survival except that once a player’s fighter is defeated, the next in the line-up steps in to continue the battle. None of these new modes add anything to the game’s story, but having these options really add some value to the game in terms of replayability.

If you have to choose between one of the other, Tekken 2 is the clear winner over the original game. It takes all of the best elements from the first title and improves upon them considerably. The roster of fighters is impressive and filled with fun and crazy characters. While not as refined as Mortal Kombat or Street Fighter, Tekken 2 offers a very interesting alternative to the other fighting games available from the same era. 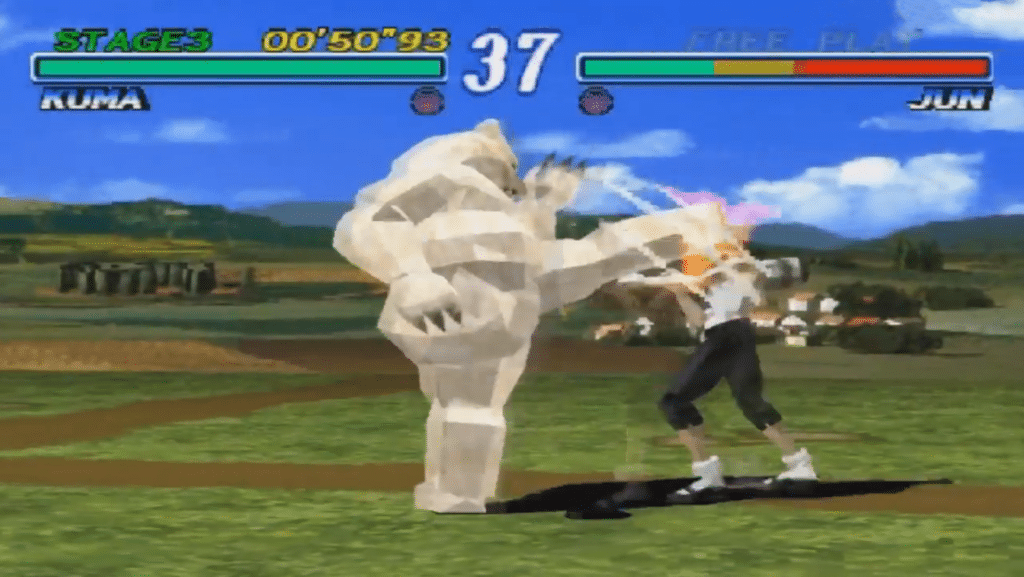 Difficulty: Hard –  Taking a queue from the first Tekken, this game offers quite a challenge for even experienced fans of arcade fighting games. The home console port does include the ability to set a difficulty level. But in reality, I’ve found that this only seems to affect the first several battles. After that, the difficulty tends to curve upwards pretty steadily. The final few battles seems just as difficult on Easy as they do on the hardest setting.  Of course, when playing against another opponent, the challenge will vary depending on the skill of the other player.

Story: While the main backstory it is essentially a mirror image of the original Tekken, the backstories for the various characters do a really good job of fleshing out the overall game lore. The colorful characters included in this game offer some equally colorful storylines.

Originality: Tekken 2 is very much a refinement of the original game. Honestly, there’s not a whole lot brought in that’s new and unique.

Soundtrack: Tekken 2 boasts an impressive CD quality soundtrack. While not quite as good as the original Tekken, the music in this game is catchy and appropriate. The voices and sound effects are still a little repetitive at times.

Fun: Like most fighting games, Tekken 2 is best played with others. But just like the original game, all of the unlockables and alternate game options provide a pretty good experience even when playing in single player mode.

Graphics: There’s a very noticeable improvement in the graphics this time around. Tekken 2 still features stone-age style polygons, but they are much smoother. Also the lighting in the game is downright impressive and really makes for some pretty jaw-dropping moments, even today.

Playcontrol: Tekken 2 features a massive improvement over the original in terms of playcontrol. The sludge-like feel of the original game is gone and this time we have a pretty precise and fluid experience. There’s still the occasional clunky mechanics here and there, but overall this game controls considerably better.

Value: Tekken 2 is currently available on PSN for the low price of $6.00. For this price, it is well worth the money. However you’ll need either a PS3 or PSP to play it.

Overall score (1-100): 90 – Tekken 2 is a great example of of how developers can learn from their previous mistakes. While the first game was good in its own right, Tekken 2 surpasses it in almost every way imaginable. If you’re someone who is curious about early 3D brawlers, this is the game that I recommend.