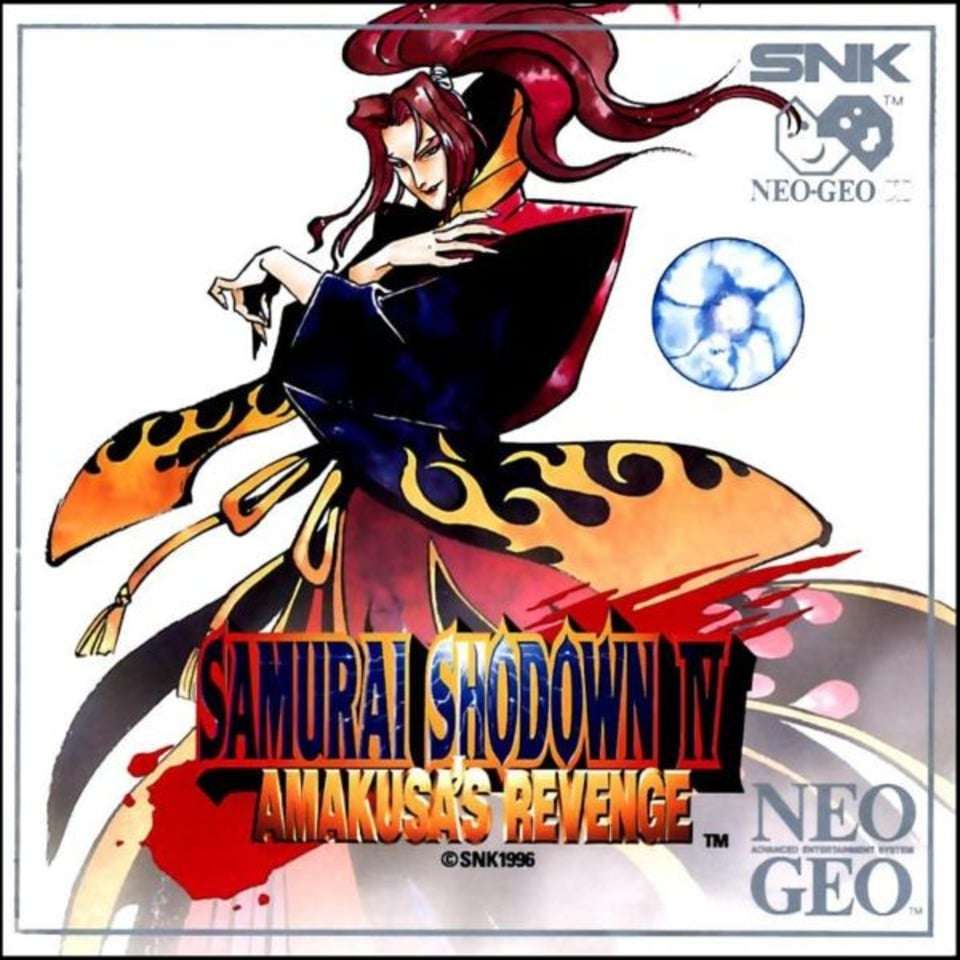 It’s been a couple of weeks since I’ve been able to sit down and write a new game review. As I mentioned in an earlier post, I recently started a new job. As with any job change, there’s always a period of adjustment when it comes to scheduling. At this point, things are starting to stabilize and I’ve found myself home alone with a quiet day off. This makes for the perfect opportunity to share my thoughts on the next entry in the Samurai Shodown series. Of course, I’m talking about Samurai Shodown IV: Amakusa’s Revenge.

If you read my last review in the series, you’ll know that Samurai Shodown III suffered from a number of issues. Concerns with this game ranged from actual bugs/glitches to unusual design choices made by the developers. Some of these changes were welcomed, while others were largely panned by fans and critics alike. The whole debacle caused major division within the fan community. As a result, Samurai Shodown IV was developed largely as an attempt to correct the course and restore the franchise to its former glory.

This entry features the return of Amakusa as the game’s main protagonist. Yet, he’s also a playable character in this title. Naturally, this is a scenario that could easily cause confusion. As fans of the series know, Amakusa was the final boss of the original game. After his defeat at the end of the first Samurai Shodown, he was resurrected. As a result of coming back from the dead, his spirit was split in two. This resulted in both a good and evil Amakusa. With this new revelation in mind, we now know that it was the good-side of Amakusa that became a playable character in SSIII. That leaves the evil Amakusa as a force to be reckoned with in this new chapter. In a nutshell, the evil Amakusa has returned. In order to restore his power, he’s kidnapped a young sorceress and set up shop in an ancient castle. And as you might expect, a band of warriors have assembled to do battle against each other for the right to challenge the “evil” Amakusa. A bit convoluted… But, I suppose it is an interesting twist, even if it does feel a little lazy. 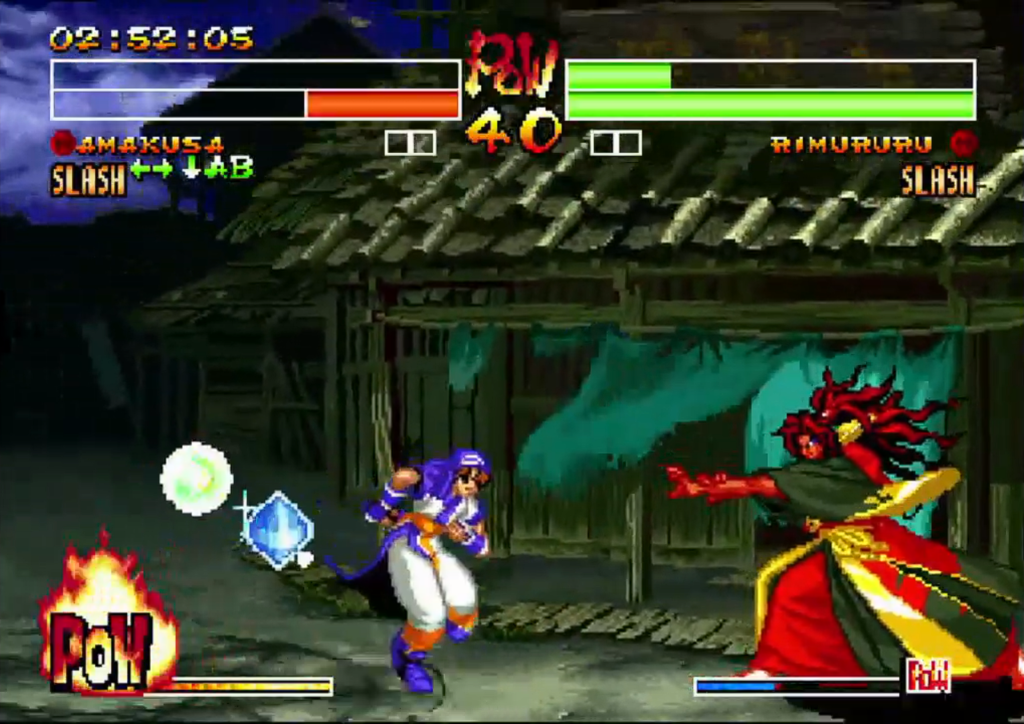 When it comes to characters, all of the characters from the previous game (even the light-side Amakusa) have returned for this entry. On top of that, three characters from other games in the series have been brought back into the fold, namely Jubei, Charlotte, and Tam-Tam. In addition to this roster, the following new characters have been added:

Kazuki – A rogue ninja who specializes in fire-based attacks. He is brother to the kidnapped sorceress being held by dark-side Amakusa.
Sogetsu – A ninja who specializes in water-based attacks. Brother to Kazuki, his loyalties still lie with his ninja clan. He has been ordered to hunt down Kazuki and assassinate him as punishment for leaving the clan without permission.

*It is also important to note that the Playstation version of the game includes the addition of Cham-Cham from Samurai Shodown II as a playable character. But her inclusion is not considered canon in the official SSIV story. 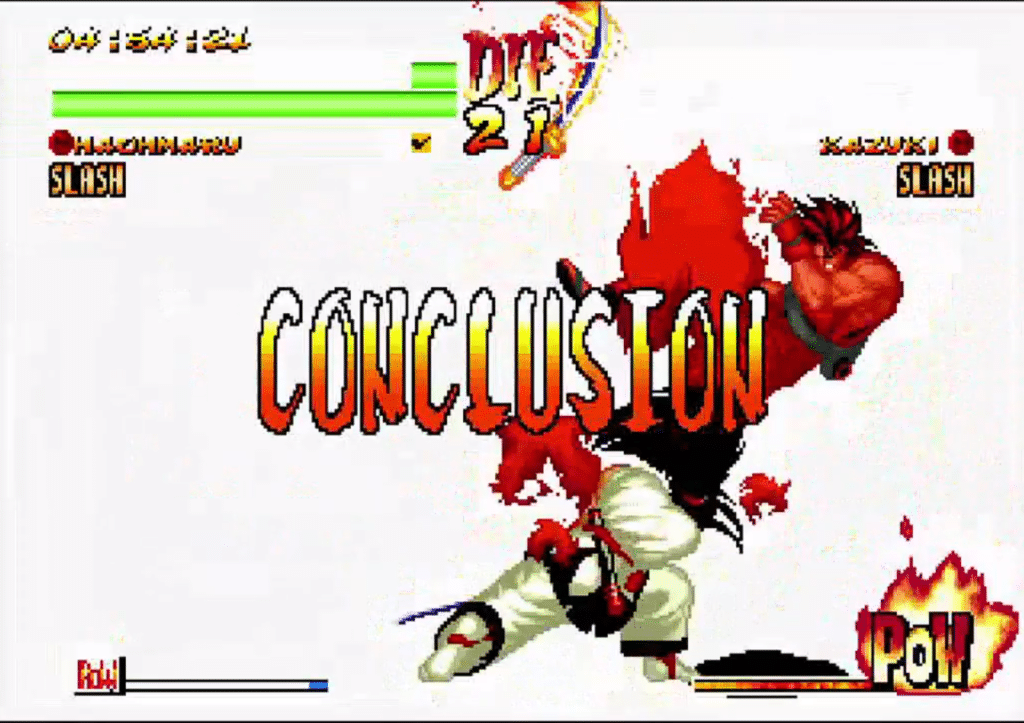 If Samurai Shodown IV doesn’t seem to shake things up when it comes to its roster of playable characters, it more than meets the mark in terms of gameplay. In this entry, a number of changes have been made to the basic functionality of the game. For example, techniques like dodging and blocking have been removed from the game entirely. The combo system has also been drastically simplified.Other changes include the removal of the “delivery man”, which up until now, was a staple of the series. Players also no longer have the ability to charge their own Power Gauge like they could in SSIII.

But, for all that was removed, a handful of new features were also added. Players now have the ability to forfeit a round (via suicide). In exchange for doing this, players can begin the next round with a fully charged Power Gauge. Also, characters can now end battles with a Mortal Kombat style “fatality” under certain circumstances. These additions proved to be somewhat controversial with some, but I still them as interesting additions to the game.

Even though a number of mechanics were removed and additional ones were added, there’s plenty of things that fans of the series will recognize. The Slash or Bust options from Samurai Shodown III are still present in this outing, as is the Choice Technique selection.

While some fans of the series will undoubtedly take issue with the “dumbed-down” gameplay. I personally think it works for the best in this instance. In its effort to stand out from the competition, the Samurai Showdown series was beginning to become slightly over-complicated. The release of this game pares things back and bit makes the game a little easier for the casual player to pick up and play. It still doesn’t capture the magic of the now legendary Samurai Shodown II, but it is leaps and bounds better than its predecessor. 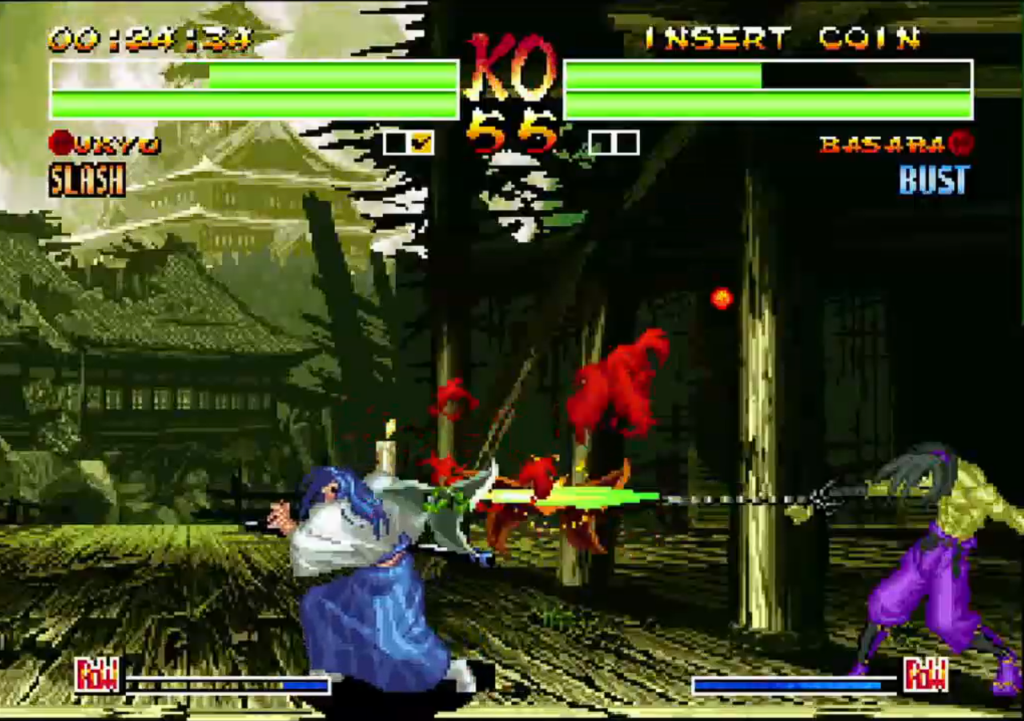 Difficulty: Medium –  The single player experience in this game seems much better than some of the previous entries. The difficulty curve seems to increase at a fairly sensible rate. The first few opponents are about as easy as you might expect, but the challenge does begin to ramp up from there. The final couple of fights are still pretty brutal, regardless of the difficulty level you select. But the game never feels completely unfair. As always, when playing against other players the difficultly level will vary depending on the skill of your opponent.

Story: The story behind this entry seems a little weak to me. I know I shouldn’t expect much from a fighting game. But even so, I feel that they could have done better. In some ways, the backdrop seems like nothing more than an excuse to bring back a classic bad guy and introduce the two new characters.

Originality: Samurai Shodown IV seems like a return to form in many ways. With that in mind, it doesn’t really bring anything new to the table. In fact, it seems to borrow a few ideas from other games in a pretty unapologetic fashion.

Soundtrack: This game continues the tradition of providing atmospheric background music using traditional Japanese instruments. It sounds very similar to all of the other Samurai Shodown games. Which, at this point, has become a staple of the series.

Fun: This game is a vast improvement over the previous entry in the series. It is simple enough to pick up and play, yet still offers enough complexity to allow a good player to excel over an inexperienced opponent. The characters and stages are colorful and entertaining.

Graphics: The graphics in Samurai Shodown IV return the series to its anime roots. The dark and brooding art direction from the previous game has been replaced with a more traditional style. The characters and backgrounds are well designed and colorful.

Playcontrol: The playcontrol in this title is a vast improvement when compared with Samurai Shodown III. The controls are smooth and intuitive and all of the collision issues from the previous game have been resolved. In my opinion, this game plays just as good as Samurai Shodown II. This is how it should be.

Overall score (1-100): 75 – Overall, this game accomplishes its goal of making up for the sub-par Samurai Shodown III. It still doesn’t capture the magic of the first or second title, but it’s certainly a step in the right direction.