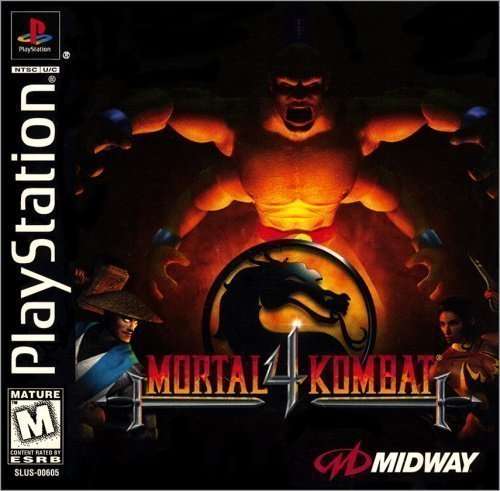 We’re almost there! I’m winding down my Arcade Fighter mini-series this week. What a trip it’s been! I started this project back in June with a review of the very first Street Fighter game. From there, I’ve covered a number of other arcade fighters in detail. Included in that list have been titles from the Mortal Kombat series. So far, I’ve talked about the first three Mortal Kombat games. So as you might expect, today I’m going to focus on the next entry in the series, Mortal Kombat 4.

This one is interesting. For starters, it’s actually the last Mortal Kombat title to get a proper arcade release. Future games in the series would be available on home consoles only. It’s also the first Mortal Kombat to feature 3D graphics and fully rendered characters. That’s right, no more digitized actors! The developers decided to go full-on computer animation this time around.

Before I dive into the gameplay itself, let’s take a look at the story for this entry in the series. The antagonist in this game is a fallen deity know as Shinnok. Ages ago, Shinnok was banished to the Netherrealm by Raiden. But now in the wake of Shao Kahn’s destruction, Shinnok has emerged and he’s out for revenge. To help combat this new threat, Raiden has once again asked the champions of Earth to band together and fight. Pretty basic storyline, but for this type of game, it works. 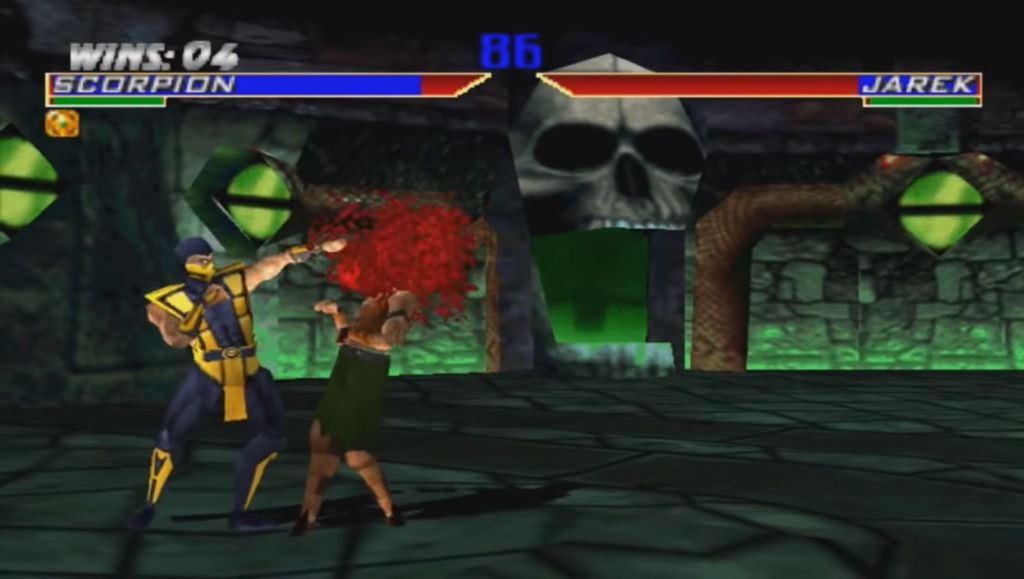 A number of characters from the previous games return for this entry. The list of returning characters is as follows: Sub-Zero, Jax, Johnny Cage, Sonya Blade, Scorpion, Reptile, Liu Kang, and Raiden.   (Goro and Noob Saibot are also available as unlockable characters).

Mortal Kombat 4 also introduces a number of new faces to the roster:

Fujin – The god of wind and longtime friend of Raiden. Fujin has pledged to join the warriors of Earth in the battle against Shinnok.
Kai – A fellow monk and friend of Liu Kang. Kai joins his friend to fight for the forces of Earth.
Jarek – A member of the Black Dragon cartel. Jarek basically assumes Kano’s role in this game.
Tanya – A ninja-like warrior who has pledged allegiance to Shinnok.
Quan Chi – A cunning sorcerer who helped free Shinnok from his prison.
Reiko – A warrior who has pledged service to Shinnok.
Shinnok – The fallen god himself. Despite being the final boss of the single player game, Shinnok is also available as a playable character.
Meat – Meat is an unlockable character that is really nothing more than a skin swap. Once unlocked, any character selected will be replaced with a bloody skeleton. But despite looking different, the underlying skillset of the selected character remains.

So, we have a lot of new fighters this time around. As expected, each character has their own set of special moves and finishers. For this game, the developers decided to remove some of the more comical finishing moves. This means no babalities or animalities, only old fashioned fatalities exist this time around. But fear not, the finishing moves in Mortal Kombat 4 are just a violent as ever.

In terms of gameplay, Mortal Kombat 4 keeps many of the mechanics that fans are already familiar with. Dashing, special moves, and combos still work as expected. The biggest change to actual combat mechanics is the introduction of the Maximum Damage system. In this game, if one player performs a series of combos against their opponent, the combo will be broken after a certain amount of damage is received. This done to prevent one player from combo-ing their way through the entire match while their opponent is helpless to stop the onslaught.

New to the game this time around is the inclusion of weapons. Each character has their own special weapon that can be drawn using a specific button combination. Once equipped, the weapon can be used against their opponent. Weapons can also be dropped and will remain on the ground until they are picked up again. This is very similar to the weapon system from the Samurai Shodown series. The biggest difference here is that you can actually pick up and use your opponent’s weapon against them. Some levels also feature environmental objects (like boulders) that can be picked up and used against the other player. 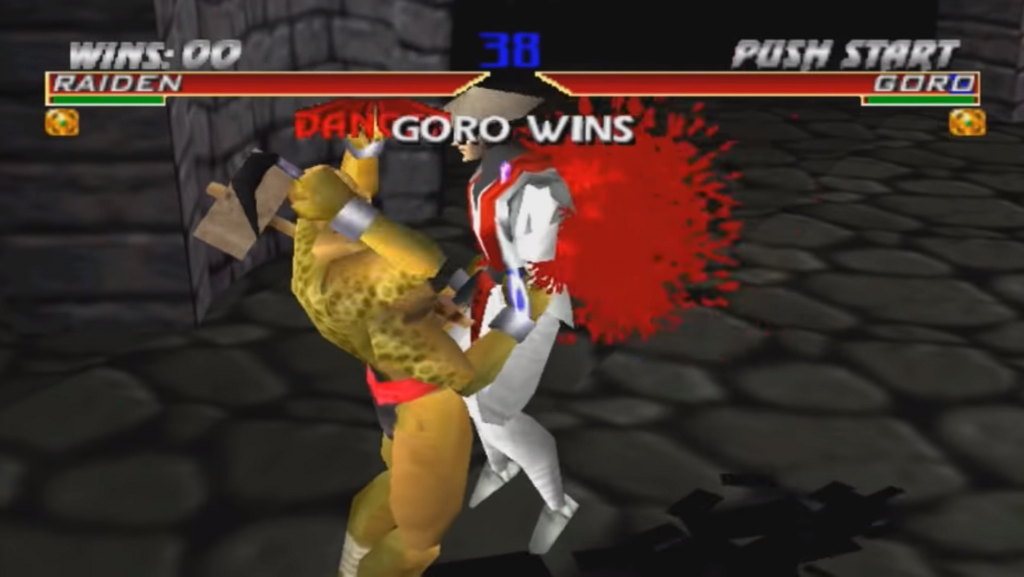 Gameplay mechanics aside, the biggest difference fans are likely to notice in this game are the graphics. Mortal Kombat 4 is the first entry in the series to feature 3D graphics. Now, the game isn’t presented in a full 3D mode, but characters are rendered in 3D polygons while still restricted to a 2D arena. This is very similar to the way the Tekken series is presented.

Even though Mortal Kombat 4 was originally released in arcades, it was really the home version of the game that most players are familiar with. Mortal Kombat 4 was released for both the Nintendo 64 and the Playstation. A Game Boy Color version of the game also exists, but as you might expect, it doesn’t compare to the other releases in terms of quality. (I barely consider it worth mentioning). When comparing the two home versions, it’s actually surprisingly difficult to pick a winner based on graphics quality alone. In most cases, PS games tend to outclass the N64 when it comes to visuals. Mortal Kombat 4 is a rare exception to this rule. In fact, I daresay the N64 version looks a bit better. One aspect that makes the PS version shine, however, is the playcontrol. The PS version of the game handles considerably better than its N64 counterpart.

Both versions contain a number of game modes, this has become standard in the series. “Arcade” is your standard Mortal Kombat experience; play vs the CPU or against a friend. This mode also serves as the standard “story mode”. “Team Mode”, in this mode of play you can create a team of up to four fighters and pit them against a CPU or player controlled team. “Endurance”, this is essentially a rush-mode style of play. You select your character and then do battle against several back-to-back opponents. “Tournament”, this is an interesting addition. In this mode of play you can create a custom tournament, complete with brackets. A similar mode was included in both Mortal Kombat Trilogy and Ultimate Mortal Kombat 3, but in this game it feel much more intuitive. Personally, I find the Tournament Mode more fun and exciting than ArcadeMode, especially when playing against friends.

A “definitive” version of the game called Mortal Kombat Gold was later released exclusively on the Sega Dreamcast. This version featured some additional characters from previous games and new arenas. The release was plagued with bugs and save issues and the additional characters ended up feeling shoe-horned in. As a result, Mortal Kombat Gold is largely ignored by fans. For many, myself included, the original Mortal Kombat 4 is what I consider to be the canon version of the game. For this review, I played through the PS version. 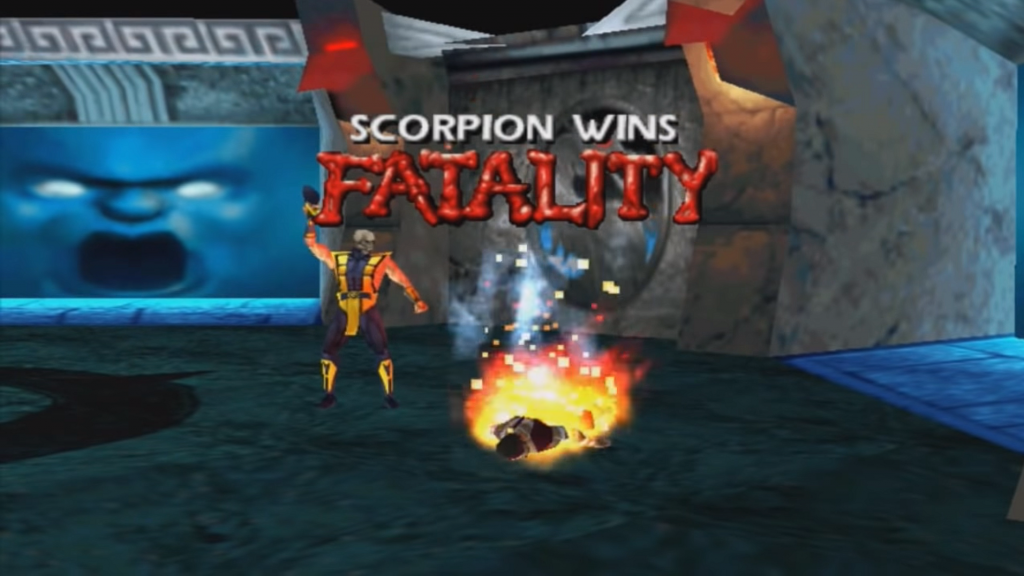 Difficulty: Variable –  The home versions of Mortal Kombat 4 offer five different difficulty levels. For the most part, these settings are feel accurate and appropriate. As always, some of the later fights in the game can still pose a challenge. But as you might expect, the difficulty varies greatly depending on the level you choose. As always, when playing against another person, your experience will vary depending on their level of skill at the game.

Story: The storyline in this entry is a bit weaker than the first three games. Granted, a new scenario was needed to introduce the new characters. But it just feels like a little more thought could have gone into it.

Originality: Mortal Kombat 4 attempts to add a fresh coat of paint to the series by providing us with 3D visuals and a new weapons system. Both of these additions are certainly welcome, but in the end, the actually do very little to make the game feel unique.

Soundtrack: As usual, each level features its own background music. The music is well composed and fitting for this type of game. But there’s not really a single track that stands out. All in all, it doesn’t really compare to the first three games in the series.

Fun: Mortal Kombat 4 certainly holds its own as an arcade-style fighter. The fatalities are shocking and entertaining as always, but it really doesn’t have that “wow factor” that the earlier games do. The best experience for this game comes in the form of Tournament Mode. But even that isn’t enough to make the game feel especially exciting.

Graphics: Mortal Kombat 4 takes the plunge into 3D. The graphics look pretty good when compared to other games of the era. But I think the original digitized actors still looked a little more interesting. For the most part, everything is well rendered, but some of the background effects look blocky and unrefined.

Playcontrol: For the first time in the series, the home version seems to play just as good as the arcade. The PS release is precise and spot-on. The same cannot be said for the N64 version. The N64 controller design is a bit awkward for this type of game and the controls feel janky as a result.

Value: Mortal Kombat 4 is available on the Playstation Network for PSP and PS3 consoles for around $6.00 – which is more than fair for a game of this type.

Overall score (1-100): 65 – Mortal Kombat 4 is not a terrible game. But it does struggle to stand out among the competition of its time. The gameplay is solid, but largely uninspired. Aside from shiny new graphics and a few novel gameplay mechanics, it brings nothing new to the table. Fans of the series will likely enjoy it for what it is, but if you’re itching to play Mortal Kombat, there are much better options in the series.