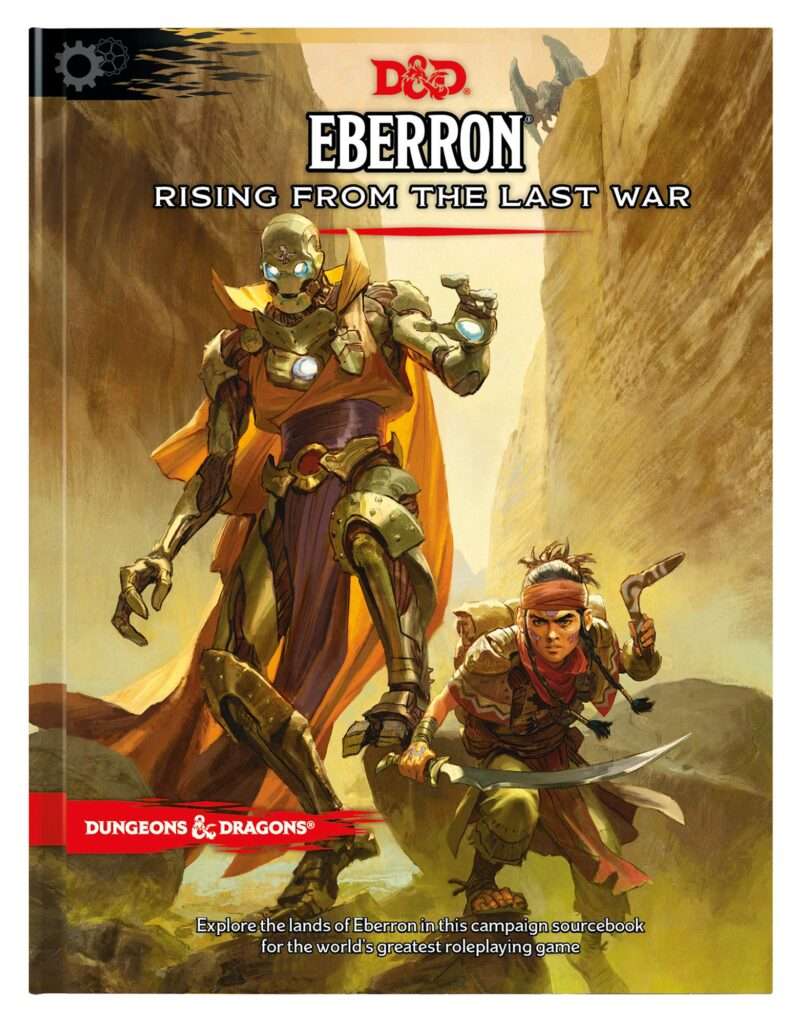 Wizards of the Coast is back with another campaign setting book for 5th Edition Dungeons & Dragons! And while it’s not the Dragonlance setting I’ve personally been waiting for, it’s still a pretty welcome addition to the 5E family. This time, WotC has returned to Eberron!

In case you’re unfamiliar, Eberron is a campaign setting originally introduced in D&D 3.5.  The world of Eberron is still rooted in fantasy, but instead of being based on an Arthurian or Tolkien-style, Eberron features a darker, “pulp-fantasy” feel. This book does a fairly good job of introducing the reader to the unique elements of the Eberron setting. It includes plenty of content for players. The most sought-after inclusion is likely the Artificer class (a fan-favorite which is easily adaptable to other campaign settings), and a handful of new and interesting playable races. Of course, this book also contains a wealth of information for DMs looking to host a campaign based in Eberron. Included is a brief gazetter that outlines the various regions and cultures of Eberron, a chapter focusing on on the city of Sharn (a main hub of activity for many Eberron-based games), and a slew of other information that will be crucial for DMs who plan to create their own adventures. There’s even a short starter module included. And as always, there’s also the inclusion of campaign-specific treasures and monsters.

I’ve never played a D&D game based in this setting, but I’ve always been fascinated with it. Eberron is a strange world where extravagant magic is extremely rare, yet simple magic has become quite mundane. To explain that better, people in Eberron use magic the way we might use electricity. But grand-level spells like “Wish” or “Raise Dead” are still looked at in awe. All of this gives the world of Eberron a unique noire feel really sets this campaign setting apart from nearly any other. And to me, that’s something always worth exploring.

Now, if you’re a serious 5E fan, you likely know that this book isn’t actually the first time WotC has brought the world of Eberron to the current generation of D&D. A couple of years ago, they released a brief PDF-only document on their DM’s Guild website. This book, The Wayfinder’s Guide to Eberron, was actually comprised of playtest material. It was through extensive testing of that material that allowed this official supplement to finally come to life. So, the question you might be asking yourself; if I own the Wayfinder’s Guide, is this new book worth my time? Well, the answer to that question is – yes. The material included here is tweaked and refined. It represents WotC’s official face of Eberron for the Fifth Edition.

For many DMs and players who are already invested in previously released adventures or even in homebrew campaigns, it may seem like this book will likely hold little value. However, as usual with any of these types of releases, there’s usually always something that can be plucked out and transplanted in nearly any setting. Now, that being said, should you feel the need to rush out and add this book to your collection? Probably not. On it’s own, it’s certainly not essential for everyone’s arsenal. But, there’s plenty of good and unique information to be found here. It’s definitely a worth addition to 5E.