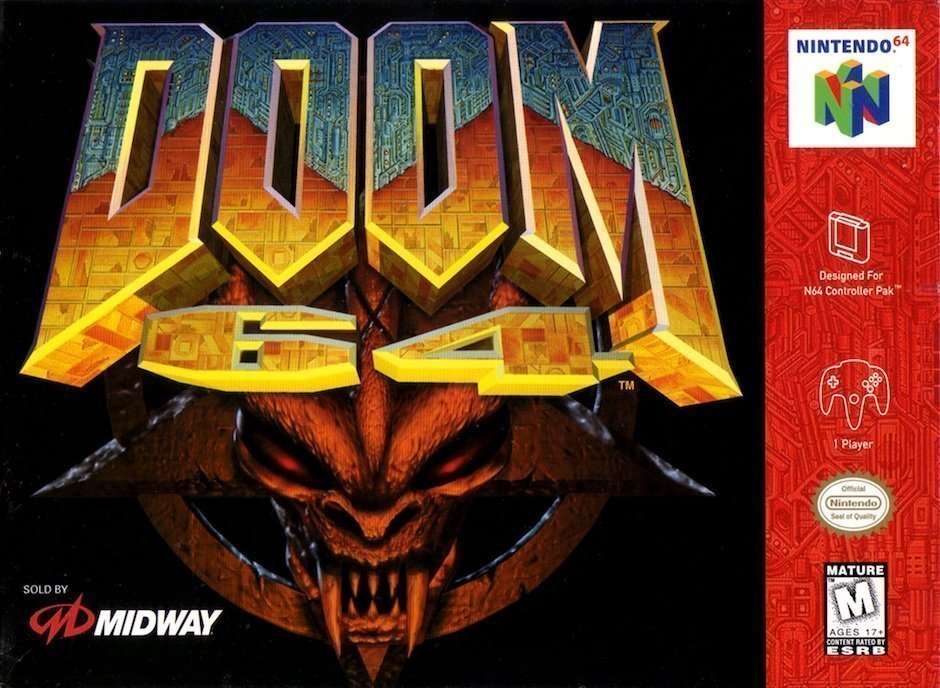 This is a review I didn’t think I’d ever get the chance to write. But thanks to the recent release of Doom Eternal, Id Software has re-released the most elusive entry in the Doom franchise; Doom 64. As many of you know, Doom is one of my favorite retro PC games. I spent countless hours of my youth playing Doom and Doom II online. The online multiplayer experience that Doom offered was unlike anything else available at the time and it hooked me like an addict.

When I learned that a new Doom game titled “Doom 64” was being released for the Nintendo 64, I naturally assumed it was nothing more than a port of one of the previous Doom titles. For this reason, I didn’t pay much attention to it at the time. But once it hit the market, it became clear that this game was something else entirely. Doom 64 is not just some thrown-together port. Instead, it was actually a sequel to the first two Doom titles. I never managed to get my hands on the original release of the game, so this re-release is my chance to experience Doom 64 for the first time. I’m excited to finally get the chance to see what all the fuss has been about.

The storyline for the game takes place after the events of Doom II. In the wake of the chaos seen in the previous games, all of the UAC facilities have been quarantined. To ensure that no one ever sets foot in a UAC outpost again, each facility is dosed with extremely high levels of radiation. For years, this quarantine works flawlessly. Then one day, Earth receives an automated distress beacon from one of the forgotten outposts. A single demonic entity managed to evade destruction and it is now resurrecting the bodies left behind in the facility. To prevent another demonic invasion, our hero comes out of retirement to eliminate the threat once and for all. 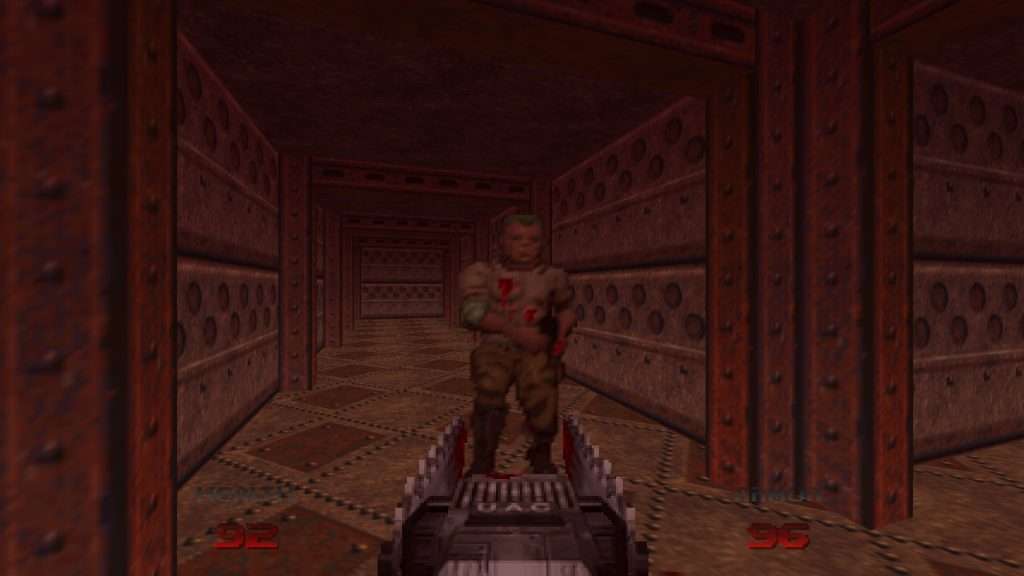 Doom 64 is very similar to both Doom and Doom II in terms of gameplay. It features a similar design aesthetic but with vastly improved graphics and sound. All of the weapons and monsters from Doom II are once again available, but they’ve been redesigned and presented here with new and fancy sprites. There’s also a brand new weapon introduced in this entry of the series.

For many N64 owners, Doom 64 has been long considered one of the consoles best kept secrets. It’s been a cult favorite for decades. And for years, the only way to experience this game was to own a physical copy. Thankfully, that day has finally come to an end. With this new re-release, Doom 64 is now available to just about anyone interested in playing it. For years, I’ve longed to get my hands on a copy, but I just couldn’t bring myself to pay collectors prices.

Now that I’ve had a few days to put this remaster through its paces, I have a lot I want to discuss. First, if you’ve been curious about this title, but worried that it might not compare to earlier games in the series, I’m proud to announce that nothing could be further from the truth. Doom 64 is worthy sequel to the first two games. To start with, it looks and feels just like the classic Doom titles you’re familiar with, just with a bit more polish. Second, the level design is absolutely superb. The quality of maps rank right up there with anything found in Doom II. Yes. it really is that good. 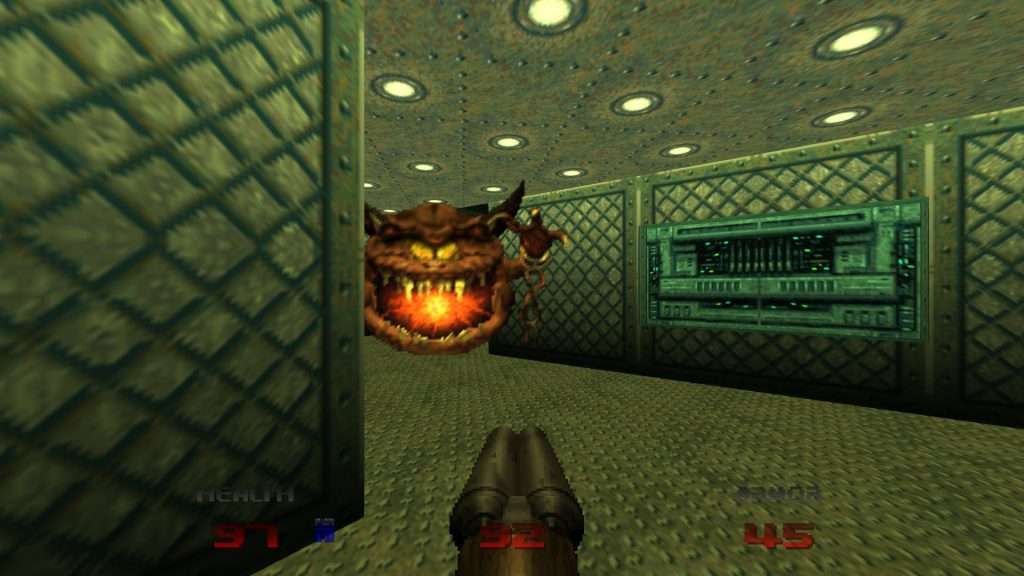 The next thing I want to mention is the quality of this remaster. This new release of Doom 64 is more than just a straight port of the original game. Yes, all of the original content is intact, but this release also adds on a whole new set of previously unseen levels. These “lost levels” are just as masterfully designed as those found in the original game. The inclusion of these maps make this re-release of Doom 64 without a doubt the definitive version of the game.

Finally, I want to mention just how important it is to finally be able to play this game on a PC. The Doom series has its roots on the PC platform, and while the original version of this game was designed to be played using a controller, something about controlling our favorite Space Marine without a keyboard and mouse just feels wrong. Now fans not only have a chance to enjoy this long lost title, but they can also enjoy it the way a Doom game is meant to be played.

Personally, I’ve waited a long time to get my hands on this title and I’m happy to say I was not at all disappointed. If I had to find something to complain about, it would be the lack of multiplayer. Yes, Doom 64 is a single player game. I suppose it would have possible to add some level of multiplayer support into the game for this re-release. But in truth, a part of me is glad they decided against it. Modern releases of forgotten games like these are best when they are left largely untouched. In this case, the addition of a few new maps is certainly welcome. But I’m happy to let this game keep its largely untarnished legacy. 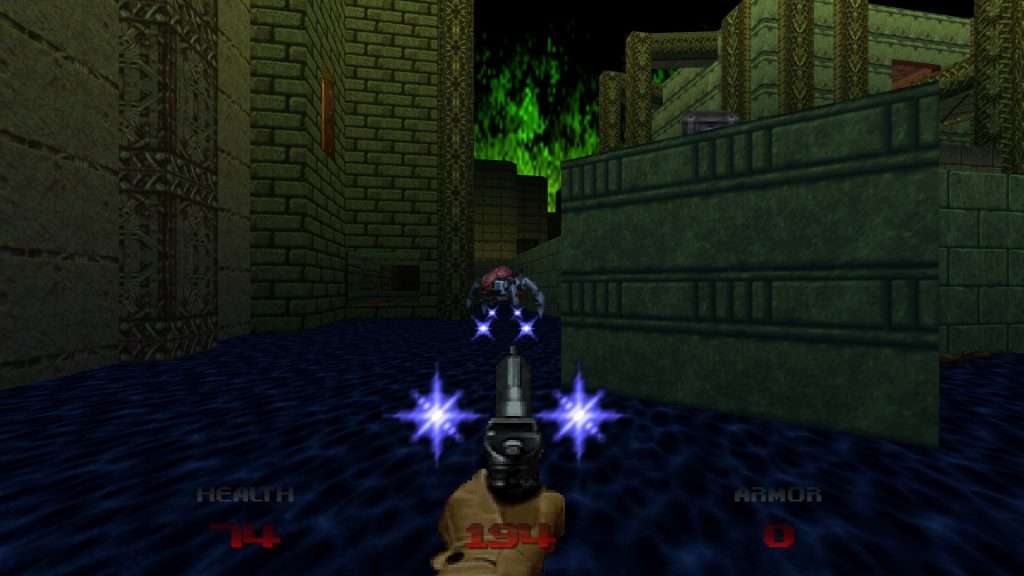 Difficulty: Variable –  Sticking with the classic formula, Doom 64 offers a number of colorfully-named difficult settings. For the most part, these settings feel pretty appropriate. But once you get towards the end of the game, even the easiest difficulty offers a few nasty challenges. For me, the default skill feels like a good place for a novice to start.

Story: Surprisingly, the backstory for this game is pretty unique and offers the perfect explanation for a new entry in the series. These types of games don’t usually require much in terms of plot. What we’re given here is more than enough to satisfy.

Originality: If you’ve played a Doom game before, you know what to expect here. There’s really not anything particularly new brought to the table with this release. But considering the real goal of this game was to bring the Doom legacy to a new platform, I can’t find any fault with that.

Soundtrack: The music in this game is much more atmospheric than what we’ve seen in the series thus far. This soundtrack is more about setting the mood than anything else. With that in mind, it does a pretty good job at accomplishing its goal.

Fun: For players who are looking for a healthy dose of nostalgia, this game is exactly what you’re looking for. For first time players, there’s still a lot to enjoy here. Just keep in mind this is a game from a different day and age.

Graphics: The graphics in this game are pretty hefty improvement over the first two entries in the series. But, compared to modern games they do look antiqued (even in the higher resolutions offered in the remaster).

Playcontrol: I’ll be up front and say that for this review I played the PC remaster of the game using a mouse and keyboard. With this scheme, the game plays just as good as you’d probably expect. Everything is nice and smooth with no real issues at all. Now, as you probably guessed, the original version of Doom 64 was designed with the N64 controller. I’ve never experienced the game on this hardware, but I can only imagine how un-intuitive it must have been. I’ve been on record before stating that I’m no fan of the N64 controller, so take my opinion with a grain of salt. But I just can’t imagine it was a good experience. Regardless, I did try this game using an Xbox One controller and I will admit that the playcontrol was not as bad as I expected. Everything felt responsive and spot-on. That being said, if you want my opinion, mouse and keyboard is still the best the way to go.

Value: The new version of Doom 64 sell for only $5.00 on all major platforms. For that price, you simply can’t afford to pass this game up. If you want to get your hands on an original copy, you’ll typically pay anywhere between $35-$50.

Overall score (1-100): 85 – Doom 64 is an underrated classic. I’ve waited for years to be able to experience this title and I must say, I wasn’t disappointed. If you’re a fan of the first-person shooters, you owe it to yourself to experience this cult classic.