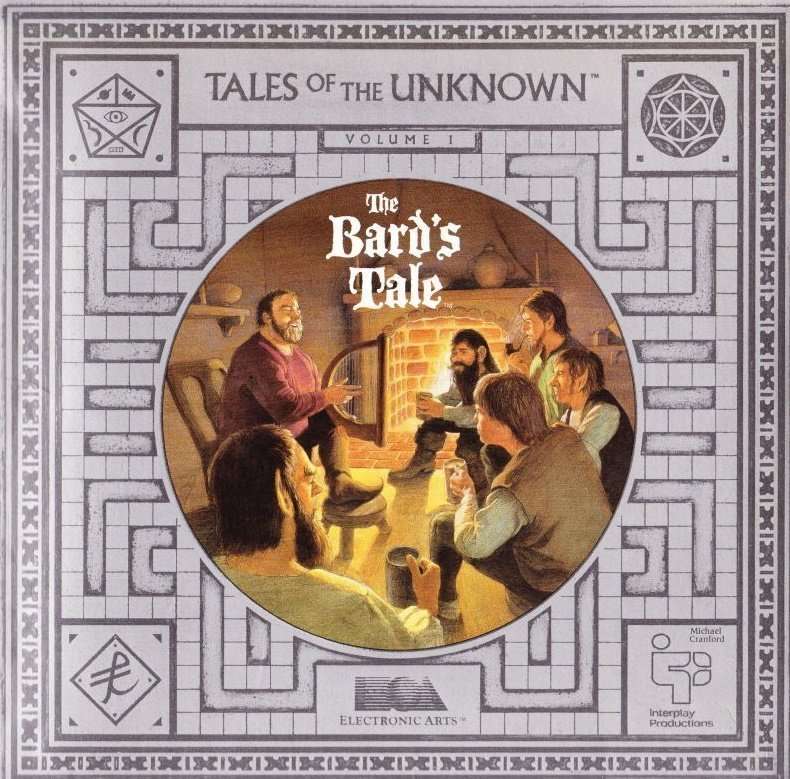 It’s no secret that I’m a lifelong fan of RPGs (CRPGs in particular). And yes, when I say “lifelong”, I mean it. The very first PC game I ever played was Castle Adventure – an unusual ASCII-art game from the MS DOS era. Despite it’s simplicity, that game kindled a firestorm of obsession that still rages to this day. These days, when you mention RPGs most people conjure up mental images of colorful anime characters. But the genre actually started here in the west and was inspired heavily by Dungeons & Dragons. That western-design is very prevalent in Wizardry, a title that is arguably one of the first games to introduce the masses to digital sword and sorcery. Following on Wizardry’s heels was the Ultima series. For a few years, these two franchises battled it out head-to-head with no interference. Then one day, a new challenger appeared on the scene; The Bard’s Tale.

The Bard’s Tale, or as it was originally titled; Tales of the Unknown, is largely inspired by the early Wizardry games. It is similar in that players create a party of characters and use them to explore a 3D dungeon. During these dungeon treks, players will encounter traps, monsters, and occasionally treasure. Like Wizardry, most of the treasure players find is housed in locked chests. These chests are usually trapped and must be disarmed if the players hope to obtain the treasures within. As players defeat monsters, experience points are earned that help characters to advance in level. As characters grow stronger, they are able to venture deeper into the dungeon. To avoid getting hopelessly lost as they explore, players are encouraged to draw their own maps using graph paper (another tactic familiar for fans of the Wizardry series).

The similarities between The Bard’s Tale and Wizardry are no mistake. In fact, the developer was such a fan of the series that the original release of the game actually included the option to import saved data from both Wizardry and Ultima III – a concept that’s still as revolutionary today as it was then. 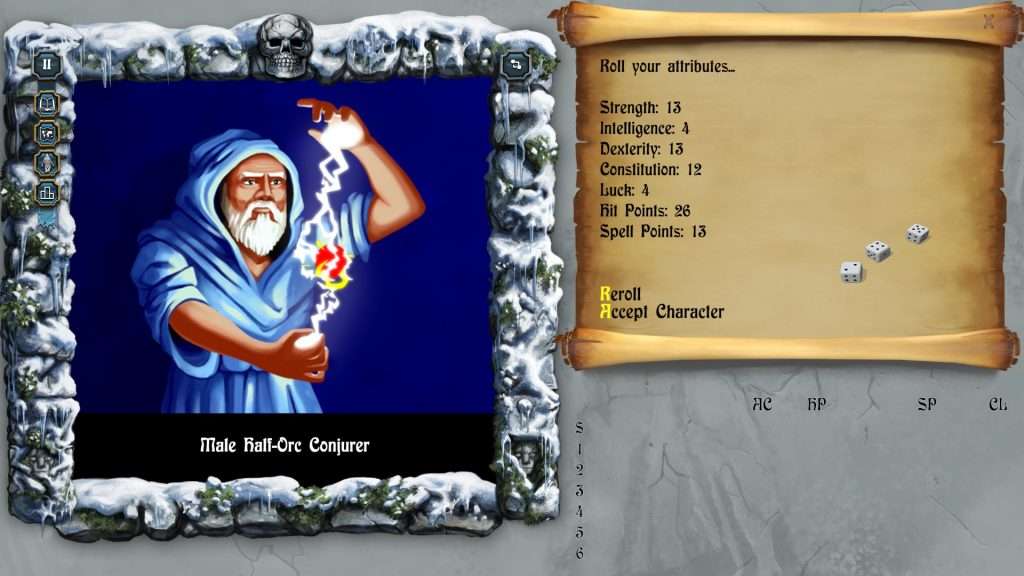 Despite being inspired by Wizardry, The Bard’s Tale pushed the envelope far beyond what had been seen before. For starters, this game is much larger in scope. Wizardry featured one dungeon per game. In The Bard’s Tale there are multiple dungeons and an entire town for players to explore. Yes, the game is still presented in a first-person grid-based view. But this time, everything is displayed in full color graphics.

Now, before we go much further let’s talk a bit about the different versions of the game. The original version of The Bard’s Tale was released for the Apple II. But over the years the game was ported to a number of various platforms. Of these releases, it is probably the MS DOS, Amiga, and Apple IIGS versions that comes out on top in terms of visuals and popularity. These days, the best way to enjoy the game is through the newly remastered The Bard’s Tale Trilogy. This collection features all three of the original Bard’s Tale games with fully remastered visuals and audio, all while still keeping the traditional gameplay largely intact. This new version of the game does take some liberties in terms of ease-of-use. For example, there is an auto-mapping feature. Also several quality-of-life changes from later games in the series are now made available to every entry in the trilogy. But, for the purists who want to play the games as they were originally released, The Bard’s Tale Trilogy comes equipped with a legacy mode that strips each game back to its roots, giving players a nearly vanilla playing experience.

For my review, I played the new Trilogy remaster in both modern and legacy modes. For most players, even old grognards like myself, I do recommend the fully remastered experience. I found the modern conveniences to be very welcome and they did little to detract from the experience found in the original game. 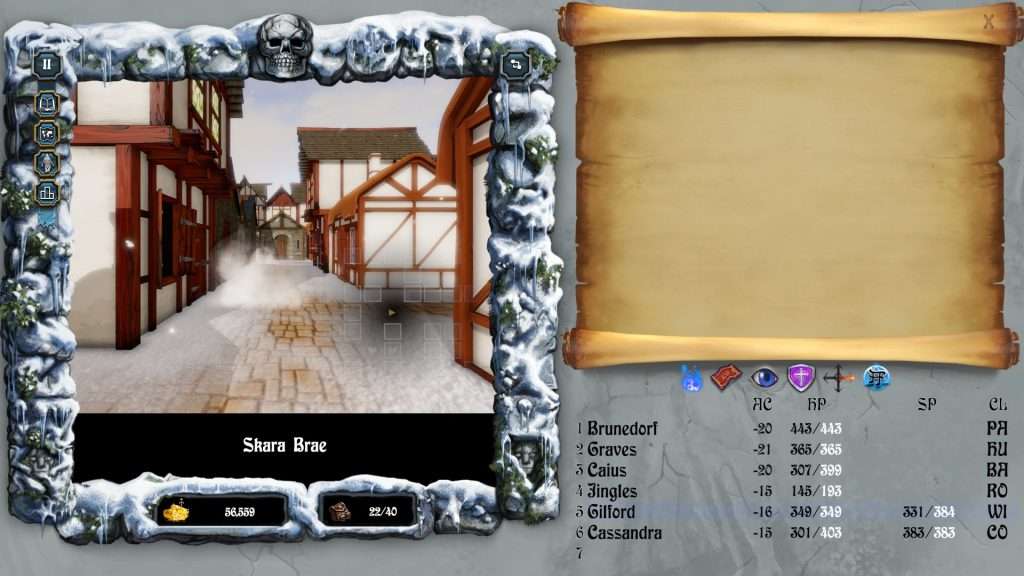 The storyline for the game is a simple one. An evil wizard named Mangar has cast a spell over the town of Skara Brae. As a result, the town has become cursed with an endless winter and horrific monsters have been sighted lurking in the alleys at night. Cut off from the outside world due to the raging blizzards, Skara Brae found itself defenseless against Mangar and his undead armies. Near hopelessness, the citizens of Skara Brae turn to a band of untested adventurers. Together, this brave party will scour the city for clues in hopes of finding a way to drive out Mangar and his evil monsters.

Character creation is similar to other games that have come before. Players are able to chose their name, race, and class. In this game, players can select from the following races; Human, Elf, Dwarf, Hobbit, Half-Elf, Half-Orc, and Gnome. Depending on the race selected and the number of randomly-generated bonus points granted at creation, players can pick any of the following classes for their character; Warrior, Hunter, Paladin, Monk, Rogue, Bard, Magician, and Conjurer. Later in the game, as spell-casting characters gain in level, they can switch to the more powerful Sorcerer and Wizard class.

Of particular note in this game is the class of bard. While the other classes had been seen in one form or another in previous RPG games, the bard class in this game presented something new. Bard’s are able to sing songs that have long lasting effects on the party (usually in the form of a buff). They can also equip a number of enchanted musical instruments. These instruments often invoke powerful spells in combat. 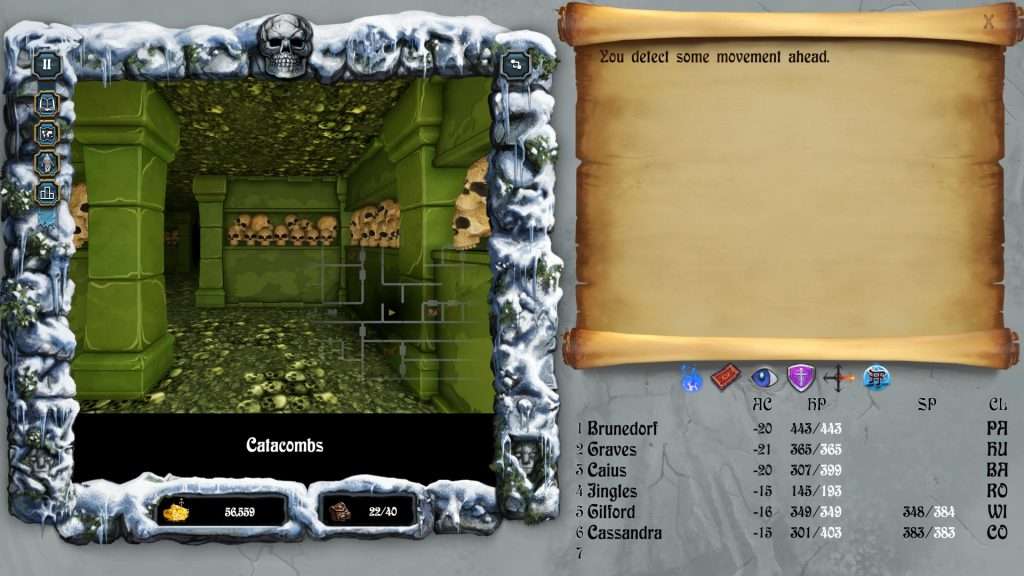 The game features a total of five dungeons (six if you count the city of Skara Brae itself). At the beginning, most of the dungeons are inaccessible. Access to these areas is granted as players progress through the game. Aside from these lock-out roadblocks, players are free to explore the game at will.

The town itself filled with places to explore. Players can enter nearly every building on the map. Most of these are empty or occupied by low-level monsters. But occasionally, players will find treasure or even hints and clues to help them on their quest. The town also hosts shops (where players can buy and sell items), taverns (good for hearing rumors and buying drinks), temples (for healing),  and the review board (where players go to level up and learn new skills).

For fans of retro dungeon crawlers, The Bard’s Tale is a dream come true. Somehow, I never experienced on this game during its original release. I knew about it, but I just never had the opportunity to actually get my hands on a copy. To me, it’s the perfect evolution of the Wizardry formula. It takes everything that made Wizardry 1-5 great and makes it even better. That being said, this is certainly not a game for everybody. The Bard’s Tale is very much a product of its time. It’s grindy, brutal, and offers very little handholding. For many, myself included, that’s perfectly acceptable. That sort of experience comes with the territory when you’re talking about this type of game. But for many younger gamers, it’s going to come off as archaic and overly complicated.

Even with these concerns, The Bard’s Tale is a slice of RPG history. It’s a truly an iconic title and I’m elated that it has finally seen a modern-release. 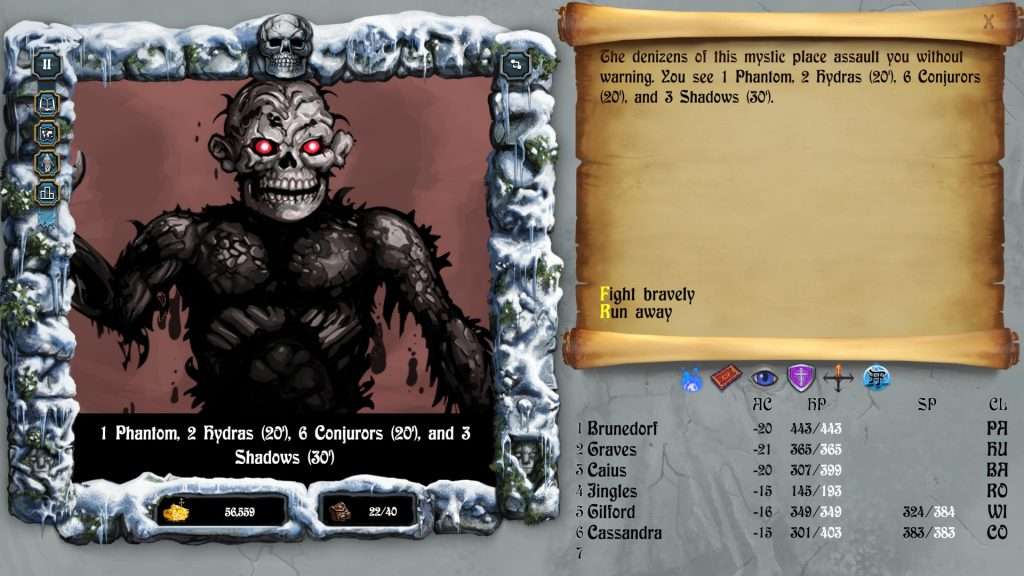 Difficulty: Hard –  The original versions of The Bard’s Tale were extremely difficult. This is exceptionally true for impatient players. Even the earliest monster encounters could spell death for a rookie party. Of course, as players level up most of the monsters encountered in town get easier. But every time players stumble their way into a new dungeon, the challenge increases again. The remastered version of the game is a little easier due to increased exp rewards. But again, unless the player is willing to take the time to grind out a few levels before progressing to new areas, the challenge will remain.

Story: Compared to modern RPGs, the storyline in The Bard’s Tale may seem pretty simplistic. But for the age it was released, it actually offered a bit more meat than other grid-based crawlers. Yes, the majority of the plot is found in the pages of the game manual. But this game also does a great job providing in-game narrative that helps progress the story.

Originality: The Bard’s Tale is heavily inspired by previous RPGs. But it takes every good facet about them and polishes it up to perfection.

Soundtrack: This is a big highlight of the game for me. The early Wizardry and Ultima games were virtually devoid of any sound effects or music. This game features plenty of both! The sound effects are basic, but appropriate. The soundtrack is where the game really shines. Now, the game itself actually offers very little in terms of music. There’s the intro theme, but that’s mostly it… unless you have a bard in your party! When activating bard songs in the game, you can actually hear that tune itself. These songs are nothing fancy, but each of them is catchy and fitting. The tunes play until cancelled by the player. This means that these bard songs actually end up becoming the soundtrack for the game, as you will most likely usually have one active.

Fun: For players who enjoy this genre of game, The Bard’s Tale is nothing short of amazing. That being said, games like these are very much an acquired taste.

Graphics: The quality of the graphics vary greatly depending on platform. Of the original ports the Apple IIGS, Amiga, and MS-DOS versions are the best looking. Of course, the modern Trilogy remaster is the best looking version of all. The graphics in that release are colorful and very much improved – all while still staying true to the original art.

Playcontrol: The game is largely controlled using either the keyboard or mouse. Personally, the keyboard is my preference, but the controls are very old-school. Thankfully, the game is not fast-paced so even if the controls take a little getting used to, the scheme doesn’t affect your gameplay at all. It’s also important to note that the Trilogy remaster is also available on the Xbox One. I haven’t personally tried that release, so I can’t speak to the playcontrol on that version.

Overall score (1-100): 95 – The Bard’s Tale is the classic CRPG experience at its finest. While this is game is understandably not everyone’s cup of tea, those that enjoy old-school dungeon crawlers will be hard pressed to find a better example. As a lifelong fan of the Wizardry series, (and it is difficult for me to admit this) but if compared side-by-side, The Bard’s Tale actually comes out as the clear winner.