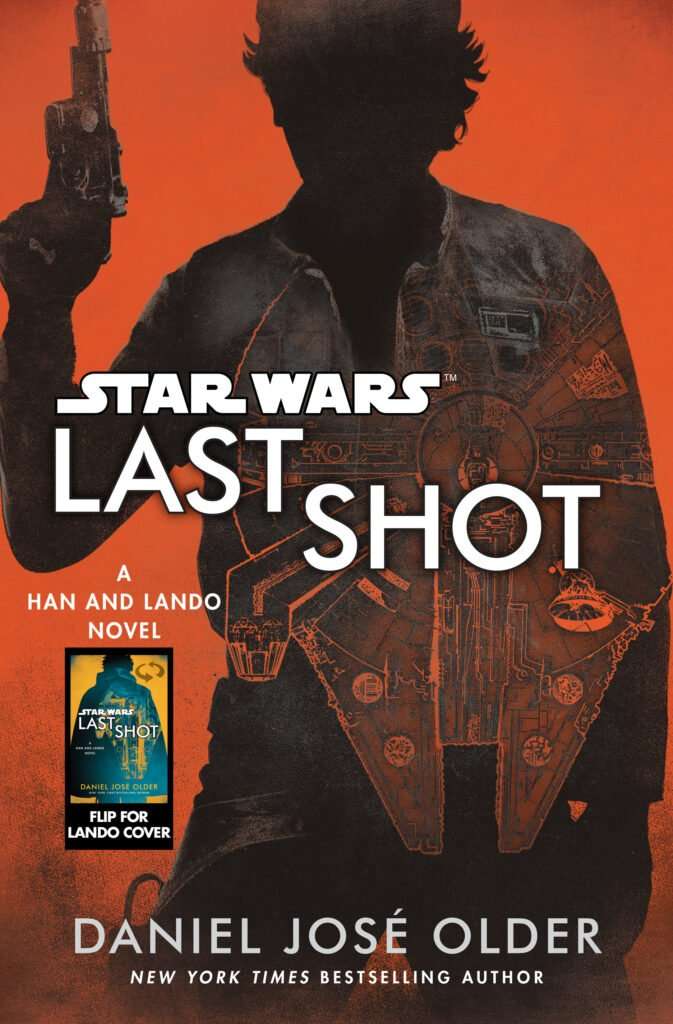 When it comes to Star Wars novels, there’s a number of really great books out there. This was true with the old “Legends” line, and it’s still true today with the new canon. But just like anything else, with the good there’s always some, well… not so good. This book, Last Shot, is one of those. In fact, if we’re being honest, this book is a downright stinker. I’m not going to beat around the bush. This book really is that bad. And trust me, the new canon has had its share of questionable publications. Sometimes the new canon stories just feel uninspired. Other times, the writing-style leaves a lot to be desired. In this case, both are true.

This book was released to be a tie-in with the Solo movie. It focuses on the characters of Han Solo and Lando Calrissian. Between the covers of this book lie three different storylines. The first, takes place about three years after the events of Return of the Jedi. It’s story that shows Lando and Han teaming up on a secret mission. This plot is probably the best thing about the novel. It gives us a glimpse of Han’s life after the formation of the New Republic. Here, we get to see how he’s adapting to both married life and fatherhood. This part of the book actually starts off on a pretty solid note. But it goes downhill fast. The next storyline actually takes place after the prequel-trilogy, but before the events of Solo. It focuses on Lando and his droid L-3. The third plot-thread, focuses on a young Han Solo and his partner-in-crime, Sana as they bounces from one disaster to another.

Now, these scenarios have potential and on their own, they actually sound pretty interesting. But the problem here is that all three of these plotline are scattered all over the book. The book starts with old Han and Lando. Then, it flashes back to a young Lando. Then it jumps back to the present. Next, we get a dose of young Han. Then back to young lando…. then back to the present-day Han and Lando, etc. This pattern is repeated from start to finish. The result is a jumbled mess that’s very difficult to keep up with. Now, in the end, all three plots do twist together into one cohesive story. But the problem is, it’s just not a very good story to begin with. I’ll leave it at that because I don’t want to spoil anything should you actually decide to give this one a read.

Terrible story aside, the next big problem with this book is the writing. It’s just dismal. There are parts of this novel that feel like they were written by an overly ambitious kid in junior high. To start with, the dialogue is trash. A forty-year-old Han Solo is not going to talk like a Gen Z teenager. I’m dead serious about this. “You got got,” is an actual sentence in this book. So is “Lando escaped. Of course he did. Because, Lando.” – I’m paraphrasing the context there, but the “Because Lando” part is word-for-word.  I’m sorry, people in the Star Wars universe don’t speak like social media influencers. Especially not established characters.

If the terrible writing style isn’t bad enough, let’s take a moment to discuss the overly simplified characters. Now, Star Wars fans everywhere love to joke around about how much of a playboy Lando seems to be. But this book takes that stereotype and plays into much more than it should. Lando is overly sexual in this book. It almost reads like a parody. He’s checking out alien butts, crawling into bed with strange women, and even flirting with robots… It’s just too much. In fact, sometimes the presentation is borderline vulgar.

All in all, this just isn’t a very good read. From the convoluted presentation, to the amateur writing style, to the overall bastardization of a number of beloved characters, Last Shot is a total flop. The only saving grace in the book are a few scenes with a baby Ben Solo. – Oh, and there’s an ewok. That’s actually pretty cool too.

Story: Poorly written and horrendously presented. It does come together in the end, but it’s just so badly written and thought-out that it falls flat on its face.

Recommended: Not recommended. This is probably the worst Star Wars novel I’ve ever read, and I’m being completely serious about that. There’s nearly nothing of value in this book for fans.