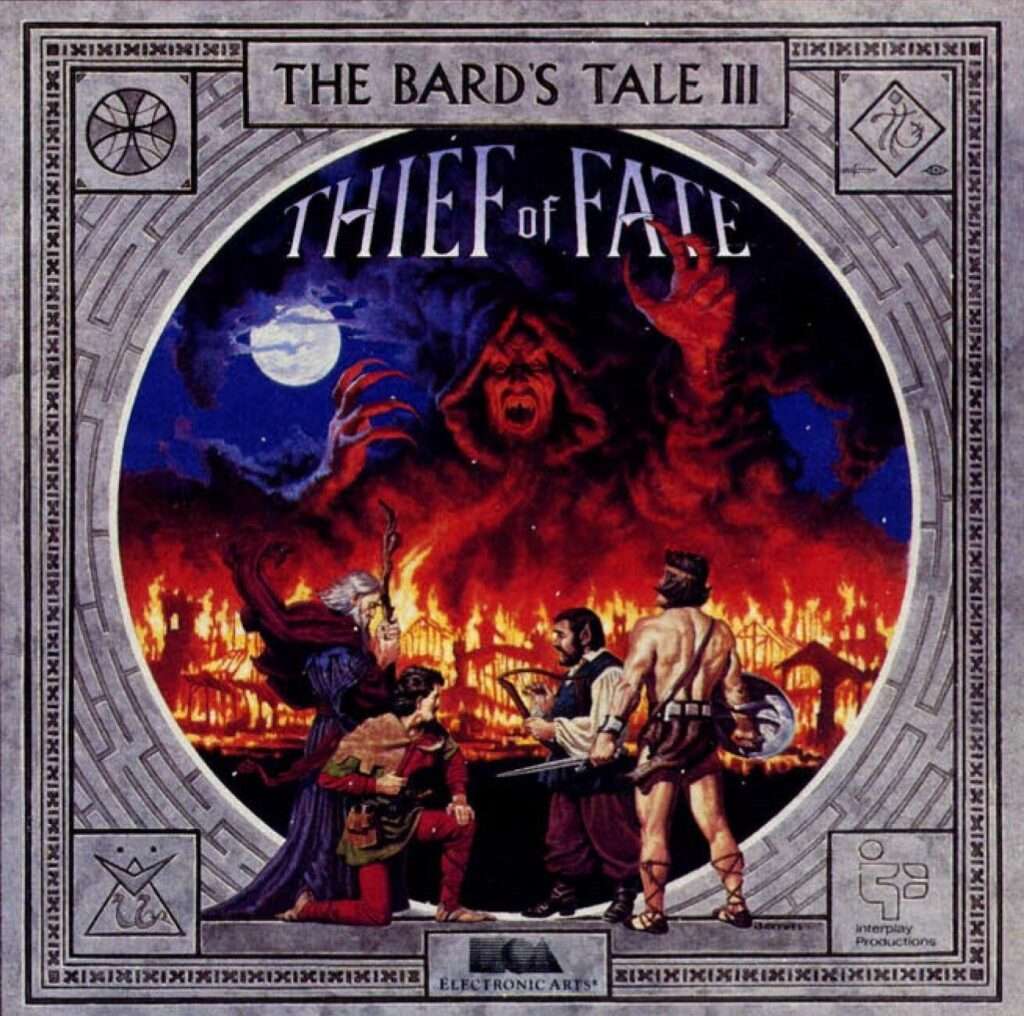 It’s only been a week since I posted my review for the second chapter in the Bard’s Tale Trilogy. It seems that the Covid 19 quarantine has afforded me with a little more free time than usual. So I decided to take full advantage of the situation and I used the time to complete the third entry of the series, Bard’s Tale III – Thief of Fate.

Before jumping into the meat of my review, I want take a quick moment to discuss the different versions of the game. If you’ve been following my Bard’s Tale reviews, you no doubt know what’s coming. But, for the sake of those readers who haven’t, please bear with me. Bard’s Tale III was initially released in 1988 for the Apple II, Commodore 64, and MS-DOS. Each of these original versions are very similar, with most of the differences having to do with graphics and sound quality. Playing any of these older versions of the game on a modern system is going to require some serious emulation. Thankfully, the Bard’s Tale Trilogy provides a fully remastered version of the game that’s true to the original in terms of both gameplay and graphical presentation. This is the version of the game that I played for my review and the version that I recommend. With that in mind, this review is specific to the Trilogy version of Bard’s Tale III.

Bard’s Tale III is a sequel to the first two games in the series. Needless to say, it is highly recommended that you play and complete the first two games before diving in to this one. In fact, after completing the second game, you will be prompted the import your existing characters to Bard’s Tale III. That being said, it’s entirely possible to start Bard’s Tale III with a brand new party. There’s even a starter dungeon early in the game to help you grind your new characters to a level high enough to tackle the main scenario. But if we’re being honest, there’s really no substitute for importing characters from the previous game. I highly recommend playing these titles in order for the best experience. 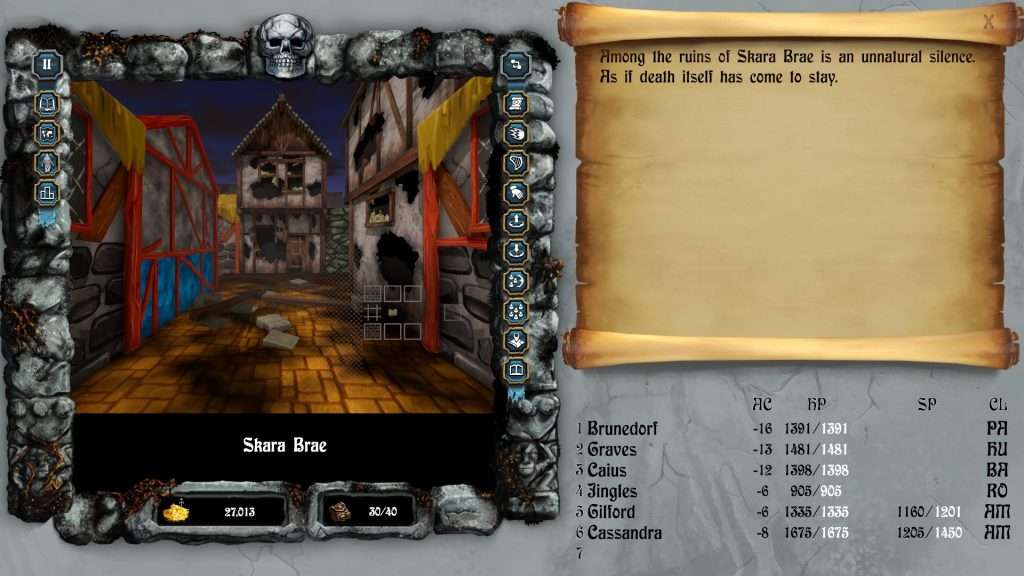 Bard’s Tale III picks up where the first two games leave off. Our heroes have returned from their last adventure to find that their hometown of Skara Brae has been destroyed in their absence. As it turns out, Tarjan – the Mad God, furious with the death of his disciple Magnar, sent forth his legions in retaliation. Now all that remains of Skara Brae are a few derelict buildings and an encampment of refugees on the outskirts of town.  As the players explore the ruins of their hometown, they discover a single survivor – a sage. He teaches the players the secret art of Chronomancy and sends them on a quest to retrieve a number of powerful artifacts from faraway worlds. The hope is that with these artifacts in hand, the heroes will be powerful enough to defeat the evil god once and for all.

As you might be able to tell from the story above, things in the Bard’s Tale universe are quite different this time around. Yes, all of the basic mechanics from the first two games are still present. But there’s a number of differences in the way this game is played. For starters, Bard’s Tale III introduces two new character classes, the Chronomancer and the Geomancer. These classes cannot be selected at character creation. Instead, they are unlocked as players progress through the game. Completing Bard’s Tale III will require at least one magic-user in the player’s party to convert to Chronomancer. A large portion of this game revolves around the concept of the player teleporting through space and time – a skill that is exclusive to the Chronomancer class. The big drawback to switching is that the character making the switch will forget all of their existing spells when they take on the Chronomancer title. But, considering you don’t really have a choice, there’s not much that can be done. On the other hand, the Geomancer class is completely optional but it is not available until much later in the game.

Other changes to the gameplay involve the elimination of the “magic emporium”. In previous Bard’s Tale titles, players could regenerate spell points by visiting a magic shop. No such shops exist in this chapter. This makes managing spell points an extremely crucial element of gameplay. Thankfully, the game provides players with a few new options to restore spell points. For example, sitting idle in sunlit areas or even in special parts of the various dungeons will cause spell points to rejuvenate. But this can be a time consuming process. There’s also a limited number of consumable items available in the game that restore spell points when used. But these items are few and far between so point management is still crucial.

Bard’s Tale III also features an auto-map system. Of course, if you’ve been playing the Bard’s Tale Trilogy versions of these games, auto-mapping is something that’s been available since the very beginning. However, when this game was initially released in 1988, this feature was a BIG DEAL. It meant that players were no longer required to chart every step they took on graph paper. In practice, the auto-map system included in the original game left a little to be desired. It worked, yes. But it was often a bit glitchy and confusing. This resulted in a number of players still relying on paper and pencil. But it’s inclusion laid the groundwork for future games to follow, making it a revolutionary feature at the time. 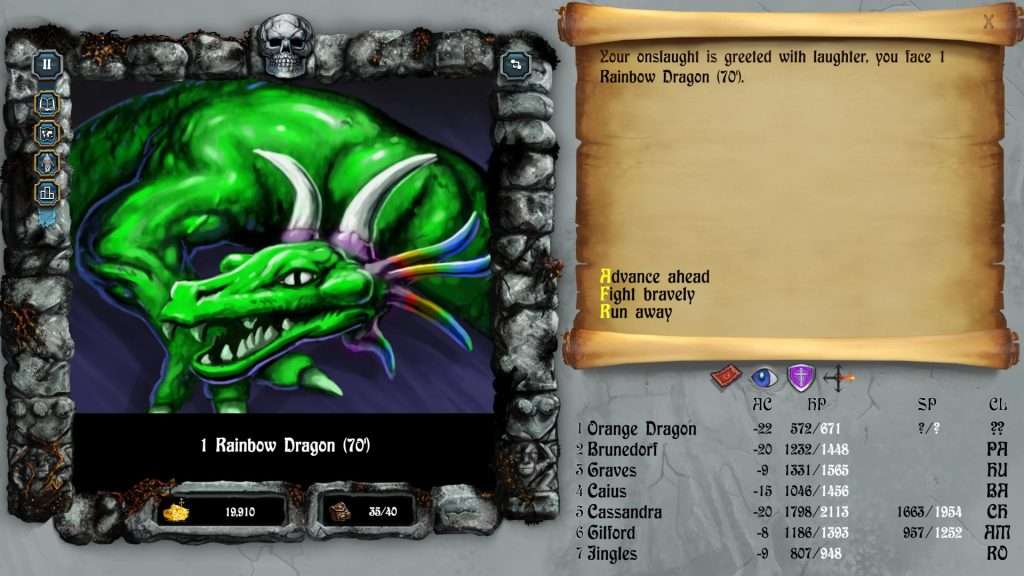 The whole gist of Bard’s Tale III revolves around the concept of traveling to different worlds, completing fetch quests, then returning back to Skara Brae. Upon returning with the spoils, the characters are granted a huge experience point reward. Until now, most RPGs only awarded experience points for defeating monsters. The quest/reward system seen in this game is one of the earliest examples of “turn-in quests” found in RPGs. Like auto-mapping, it’s another example of some of the groundbreaking concepts introduced in this game. Another improvement made to the series in Bard’s Tale III comes in terms of artwork. In this chapter, each dungeon and realm has its own unique look and feel. In the past, there were alternate textures in some dungeon locations. But there were also lots of reused assets. This time around, every single locale looks different. This may sound simplistic, but it’s a nice little touch.

It seems that the developers were aware just how unnecessarily difficult Bard’s Tale II felt to many fans. In terms of challenge, this game is is much more manageable. There’s still plenty of traps, tricks, and tough encounters. But this time around, nothing feels completely unfair. There’s not a single obstacle that can’t be conquered without thought or preparation. Which is exactly the way a game like this should be, in my opinion.

Bard’s Tale III does for the series what the original Bard’s Tale did for the entire CRPG genre. It took an already successful formula and improved on it so dramatically that it actually ended up redefining the whole concept. At times, the improvements are so subtle that it’s difficult for players to pinpoint just what it is that’s so enthralling. But to me, that’s part of the magic. Without a doubt, this game is the strongest in the trilogy and it’s a CRPG that should be experienced by any fan of the genre. 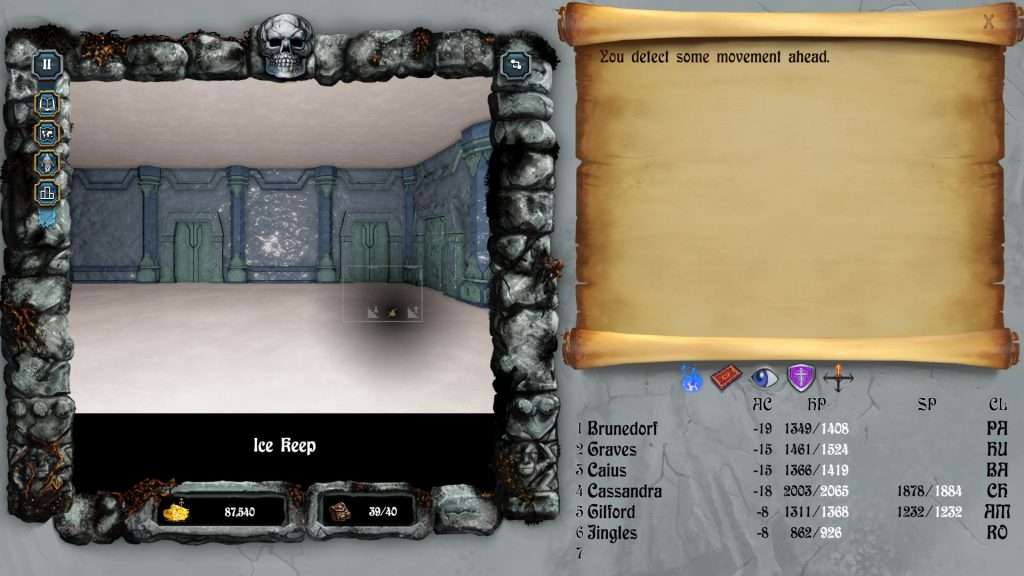 Difficulty: Hard –  Even if it’s not as ridiculously difficult as the second game, Bard’s Tale III is still no walk in the park. This is true even if importing characters from the previous scenario. Along with all of the usual dangers found scattered through the various dungeons, we now have spell point management to worry about. But just like many old school CRPGs, patience is the key to success. Taking the time to explore and grind out levels early on can really turn the tide when it comes to difficulty of the game.

Story: The story for this scenario is easily the best of the three. It develops on the lore presented in the first game and really breathes some new life into the backstory of the series. The end result is a deep and engaging story that finally makes the Bard’s Tale universe feel like a living, breathing world.

Originality: The Bard’s Tale III introduces a number of new concepts to the series. To start with there are two new classes and a number of new worlds to explore. This combined with new mechanics and the auto-map system really made this game seem like a substantial upgrade during it’s original release.

Soundtrack: The music is on par with what is found in the first two games. The sound effects of the game itself are pretty basic, but appropriate. There is actually very little in terms of music. There’s the intro theme, but that’s mostly it unless you have a bard in your party. When activating bard songs in the game, you can actually hear that tune that the bard is performing. These songs are nothing fancy, but each of them is catchy and fitting. The tunes play until cancelled by the player. This means that these bard songs  actually end up becoming the soundtrack for the game, as you will most likely usually have one active. This game adds additional songs not heard in the first two Bard’s Tale games.

Fun: For players who enjoy this genre of game, Bard’s Tale III is about as good as it gets. It takes everything that players love about the first two games and make them even better. That being said, games like these are very much an acquired taste. You either like these grid-based CRPGs or you don’t.

Graphics: The quality of the graphics for early versions of the game vary depending on platform. Of course, the modern Trilogy remaster is the best looking presentation of the game. The graphics in that release are colorful and very much improved – all while still staying true to the original art direction.

Playcontrol: This game is largely controlled using either the keyboard or mouse. Personally, the keyboard is my preference, but the controls are very old-school. Thankfully, the game is not fast-paced so even if the controls take a little getting used to, the scheme doesn’t affect your gameplay at all. It’s also important to note that the Trilogy remaster is also available on the Xbox One. I haven’t personally tried that release, so I can’t speak to the playcontrol on that version.

Overall score (1-100): 100 – Bard’s Tale III is probably one of the finest representations of the grid-based dungeon crawl genre. While this type of game is understandably not everyone’s cup of tea, those that enjoy old-school dungeon crawlers are unlikely to find a better title. I really enjoyed the first Bard’s Tale game, but this chapter is a solid improvement.