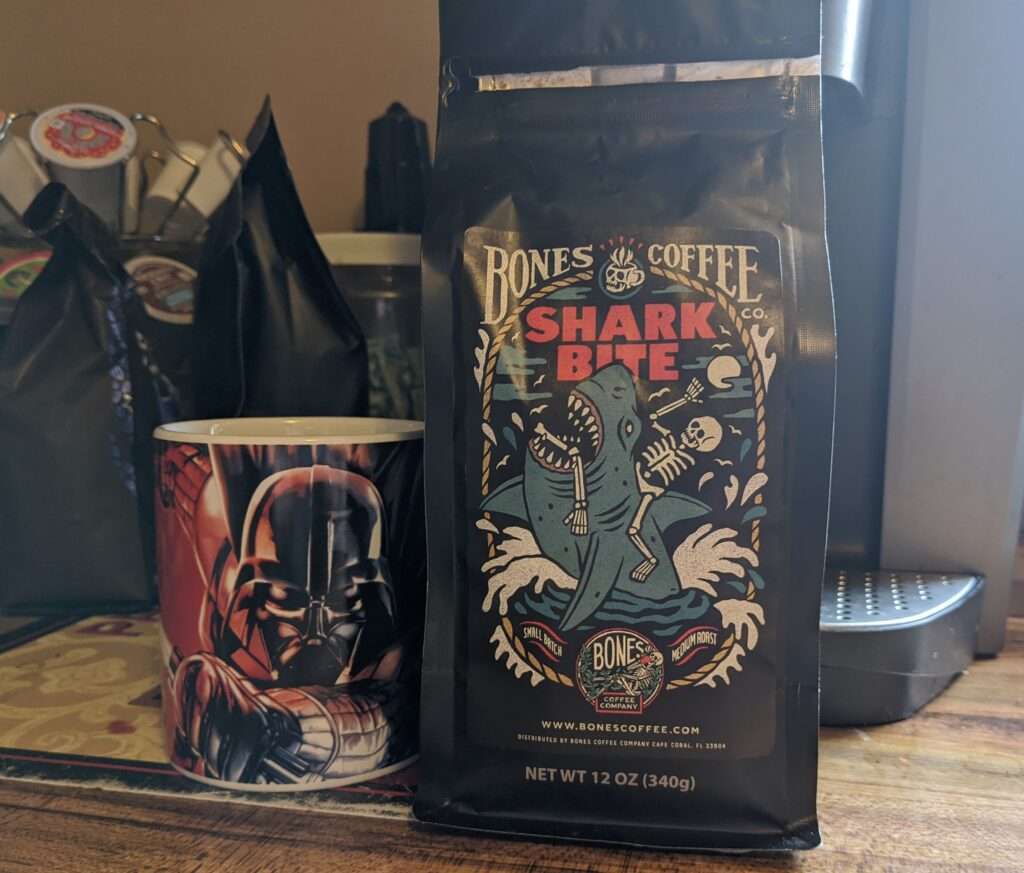 Welcome to July! When I was a kid living in Japan my family would take one week during the month of July and go on vacation to an Okinawan beach resort. The waters were crystal clear and I always enjoyed snorkeling and looking at all the fish and corals. That was what I enjoyed, but there was always so much more going on; fishing, boating, surfing… you name it! The waters around Okinawa are relatively tame. We never had to worry about things like… SHARKS! Which leads me to today’s Nerd Fuel review, Shark Bite by Bones Coffee!  (How was that for a set up?)

Seriously though, ever since trying their Highland Grog, I’ve been eager to sample some of the other offerings by Bones Coffee. So I sat down in front of their online shop and scrolled through the endless menu of options. They have so many blends and flavors that I found it hard to decide which to try. That’s when I noticed an oddly named selection with a “limited release” tag next to it; Shark Bite.

Shark Bite is medium roast coffee that is advertised as having a spicy/buttered-rum flavor. This sounded suspiciously similar to their Highland Grog. That brew also boasts a spice/rum flavor combination with a little butterscotch mixed in. I enjoyed Highland Grog immensely, so despite being potentially similar, I decided to give this one a go and I wasn’t disappointed.

As soon as I put this coffee on to brew I knew it wasn’t going to be the same as Highland Grog. For starters, the spice aroma is much stronger in this cup. It smells very festive – almost like you’d expect from a holiday coffee. This seems to be an odd choice for what being advertised as a limited summer release. But I decided to roll with it. I’m happy to report that the flavors in this coffee tasted very organic. There was no false/syrupy aftertaste. The taste of this coffee dispels any notion of “holiday blend”. Yes, there’s a hint of holiday-like spice, but it seems to lean a little heavier on the cinnamon than you typically get with other “spiced” coffees. The rum flavor is quite noticeable, but the spiciness dominates the flavor profile ever so slightly. The whole thing has a nice rich, buttery/sweet finish that’s quite hard to describe. By the time I was done with my cup, I was admittedly a bit confused. The rum does give this coffee a bit of a vacation vibe, but the spice… well that flies in the face of your conventional “summer coffee”.  Regardless, it was absolutely delicious. I’ve never had a coffee quite like it!

If you’re looking for something unique, Shark Bite is a coffee like no other.

Would buy again?:  Yes. This an odd but tasty coffee. The flavor profile seems a bit weird on the surface, but after experiencing it – it works. This is a coffee that hard to accurately describe, but trust me, it’s worth a sip.