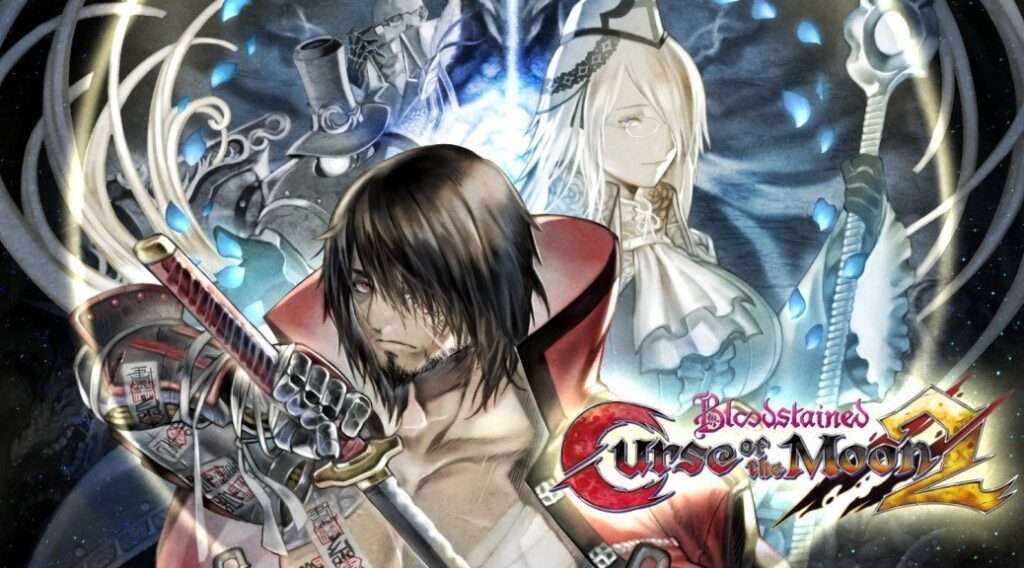 Originally intended to be a prequel to the main game, Curse of the Moon was later downgraded to being little more than a retro-style companion. It seems that by the time Ritual of the Night was released, the lore behind the game was reimagined, leaving Curse of the Moon as a non-canon entity. I guess this is why I was so surprised to learn that a second Curse of the Moon game was going to see the light of day. Regardless, it is here and I have played it. So, let’s take a closer look at the game itself.

Being a non-canon entity in the series means that this game is somewhat light when it comes to having a solid storyline. Regardless, here’s the basic gist; The world is on the cusp of a demonic invasion. In attempt to prevent this from happening, the legendary swordsman Zangetsu must battle his way to the demon’s tower and put an end to the invasion. To assist in this endeavor, he recruits the help of Dominique (the exorcist from Ritual of the Night), a sharpshooter by the name of Robert, and Hachi, an intelligent dog that pilots a suit of mechanized armor… Wait, what? Ok that’s pretty weird, but we’ll roll with it. 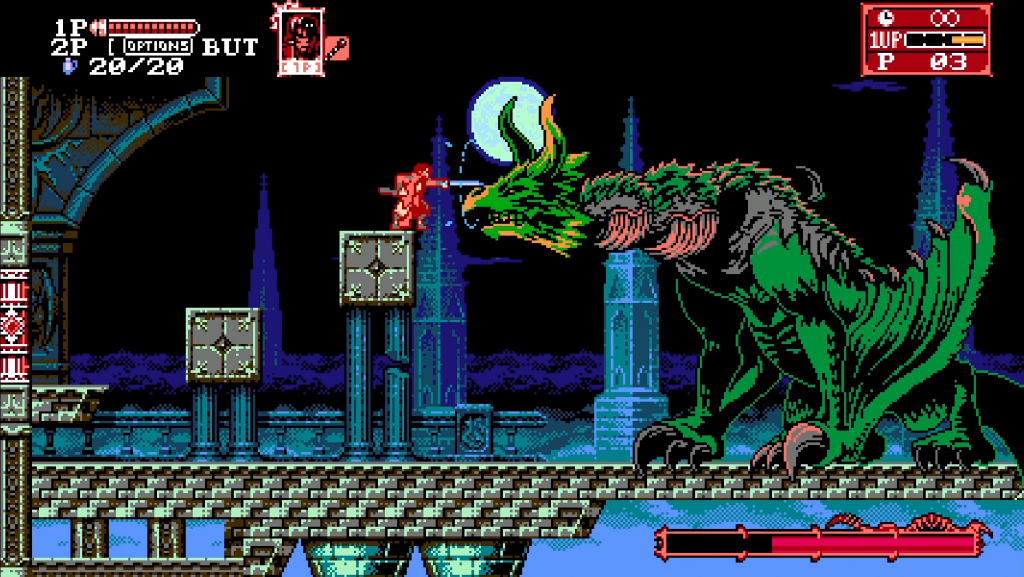 If you’ve played the original Curse of the Moon, you’ll already have a pretty good idea what to expect. The game looks and feels like a retro 8-bit platformer. When it starts, you control the character of Zangetsu but as you progress through the game’s eight levels, you will encounter new companions. Once unlocked, you can switch between these other characters on the fly. Each character has their own strengths and weaknesses and a slightly different play style.

For example, Zangetsu is your basic middle-of-the-road hero. He’s stout, with fairly strong attacks, but he’s not very agile. Dominique on the other hand is a bit weaker but has a slightly better attack range and can use magic. Robert is probably the squishiest of the bunch. But he’s extremely nimble and has  long-range attacks. Finally, we have Hachi. Hachi can take quite a beating, but doesn’t deal a whole lot of damage. Hachi’s real value comes from his special ability that renders him invulnerable to any attack (for a limited time).

The game is comprised to eight unique levels, each with a boss at the end. Once completing the game, players will be prompted to go through it a second time. The first playthrough of the game is fairly straight forward. But the next time around, things are a bit different. Now, having all of the characters at your disposal from the beginning, players are able to get to areas that were previously inaccessible the first time around. This adds a certain amount of replayability to the game. Which is a good thing, because if you want to see the true ending, you’ll need to plow through the game a total of at least four times. In fact, if you manage to stick it out for the long haul, you’ll even get a chance to see some familiar faces from the original Curse of the Moon. 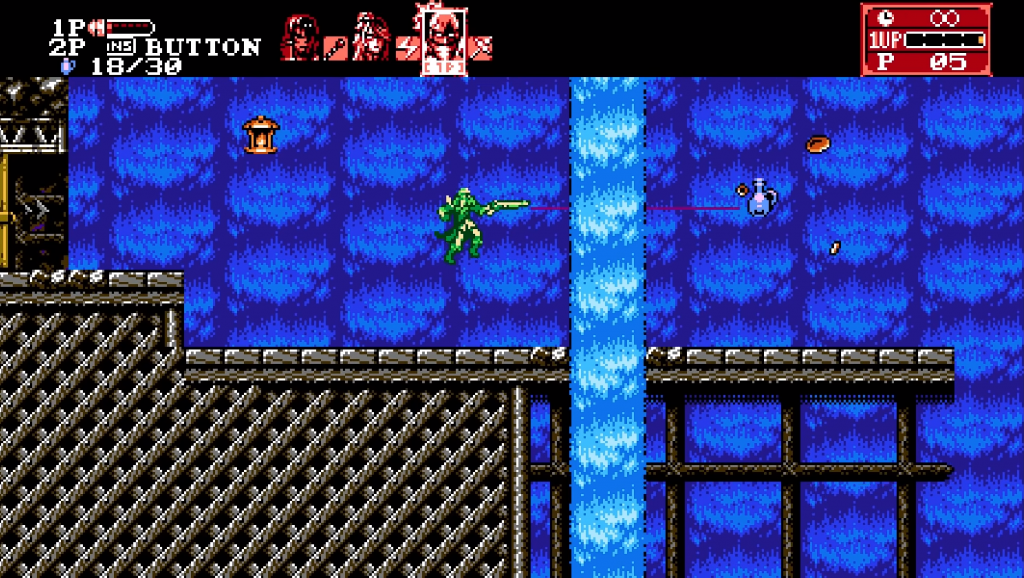 There are two difficulty levels to choose from when starting the game: Casual and Veteran. In truth, there’s not a big difference in actual “difficulty” between these two options. The challenge of the gameplay remains largely undisturbed either way you go. The biggest difference is that Veteran mode offers a limited number of continues. It also introduces a knockback mechanic when your character gets hit by an enemy (similar to what is seen in Castlevania). So with that in mind, let me warn you in advance. This game is tough. Even on Casual mode with unlimited tries, some of the later bosses are downright brutal. That being said, the game is nowhere near impossible to complete. But patience is very much required if you want to be successful.

A recent patch also added a new difficulty option to the game: Legend Mode. Now, I’ll be up front and admit that I had already completed the game before this new mode was available and I really don’t have the desire to go back and play through everything all over again. But according to the patch notes, Legend Mode adds an extreme level of difficulty to the game. Under Casual or Veteran mode, when a character dies, it is only that character that dies. Meaning, you get another crack at things with any remaining characters. In Legend Mode, if one character dies – they all die. That’s right, “Nintendo-Hard” at its finest.

If you’re a big retro fan, there’s a lot to love here. But nostalgia aside, probably the best thing about Curse of the Moon 2 isn’t the old school feel. It’s the fact that you can share it with a friend. You heard me right, this game features local co-op multiplayer. And it really adds a whole new dynamic to the genre. Imagine the gameplay of co-op Contra combined with the mechanics of Castlevania III – well, that’s essentially what you get. And it works great!

For older gamers like me, Curse of the Moon 2 is very much an homage to the classic games that we grew up with. When compared to the original Curse of the Moon, this game improves on nearly every aspect. Personally, I love it. The Castlevania franchise has always been a favorite of mine and this game scratches that itch better than nearly anything else available. On the other hand, I’m not sure how appealing something like this might be to younger gamers. 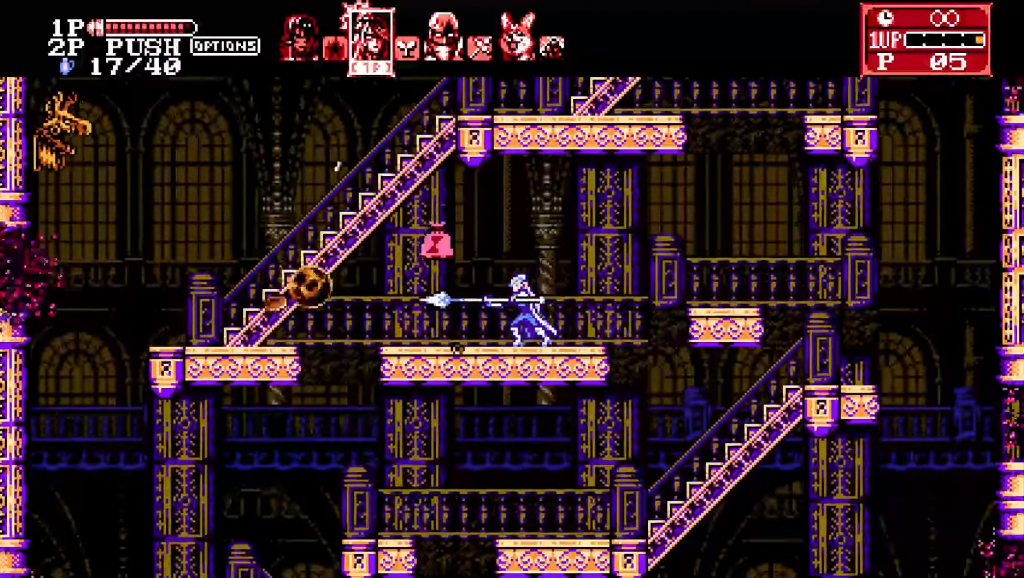 Difficulty: Variable –  Even though there are multiple difficulty options, make no mistake about it, this game is pretty tough. It starts off fairly mild, but the difficulty ramps up pretty quickly. Most of the challenge comes in the forms in the boss fights, especially those in the last half of the game. While you’re learning the ins-and-outs, Casual Mode will be your best friend. Most of the bosses have some sort of pattern or strategy that can be learned if you’re patient enough. But there are a couple of fights that seem very random. These are the tough ones.

Story: The story for this game is pretty barebones. It only loosely connects to Curse of the Moon and doesn’t tie-in to Ritual of the Night at all. But then again, this game is really intended to be nothing more than a romp down memory lane and isn’t supposed to be taken too seriously.

Originality: For this type of game, the goal isn’t to break new ground. Instead, it’s meant to spark nostalgia. In that regard, it does a fantastic job. On the other side of the coin, it takes the look and feel of old school games and reinforces that framework with some new concepts. This is a very good thing.

Soundtrack: The game soundtrack is also a nod back to the chiptune themes of yesteryear. But it really doesn’t give us anything particularly memorable. Still, the music is fitting and does its job well.

Fun: There’s a lot to enjoy with this title. Fans of old school games are more likely to have a blast with this one than some of the more younger gamers. The gameplay mechanics are very dated. Plus, some of the later levels can be downright frustrating at times. In my opinion, the best way to enjoy this game is to play co-op with another player. Games like this are a blast when shared with a friend.

Graphics: This game was designed to mimic the classic 8-bit NES era. With that in mind, it does a perfect job. Truth be told, Curse of the Moon 2 looks better than any true 8-bit title. There’s things going on in this game visually that just weren’t possible on original NES hardware. Even so, the designers capture the retro aesthetic perfectly.

Playcontrol: I played this game on the PS4 and the controls were responsive and accurate. It is my understanding that the same is true on both the Switch and the Xbox One. PC players will likely want to break out a controller for this one. I can’t comment on the default PC controls, as I have not experienced the game on that platform.

Value: Curse of the Moon 2 is available for $15, regardless of platform. All things considered, this is a pretty fair price, especially for fans of this genre. If you’ve never played this type of game or you’re unsure if you’d like it, then maybe you’ll want to wait for a sale.

Overall score (1-100): 80 – I liked the original CotM, but this one improves on it in almost every way. The levels are well designed and challenging, the characters are all unique and interesting, and there’s plenty of secrets to uncover through multiple playthroughs. For me, the best improvement is the inclusion of co-op multiplayer. Being able to hack your way through this type of game with a friend makes it so much better.