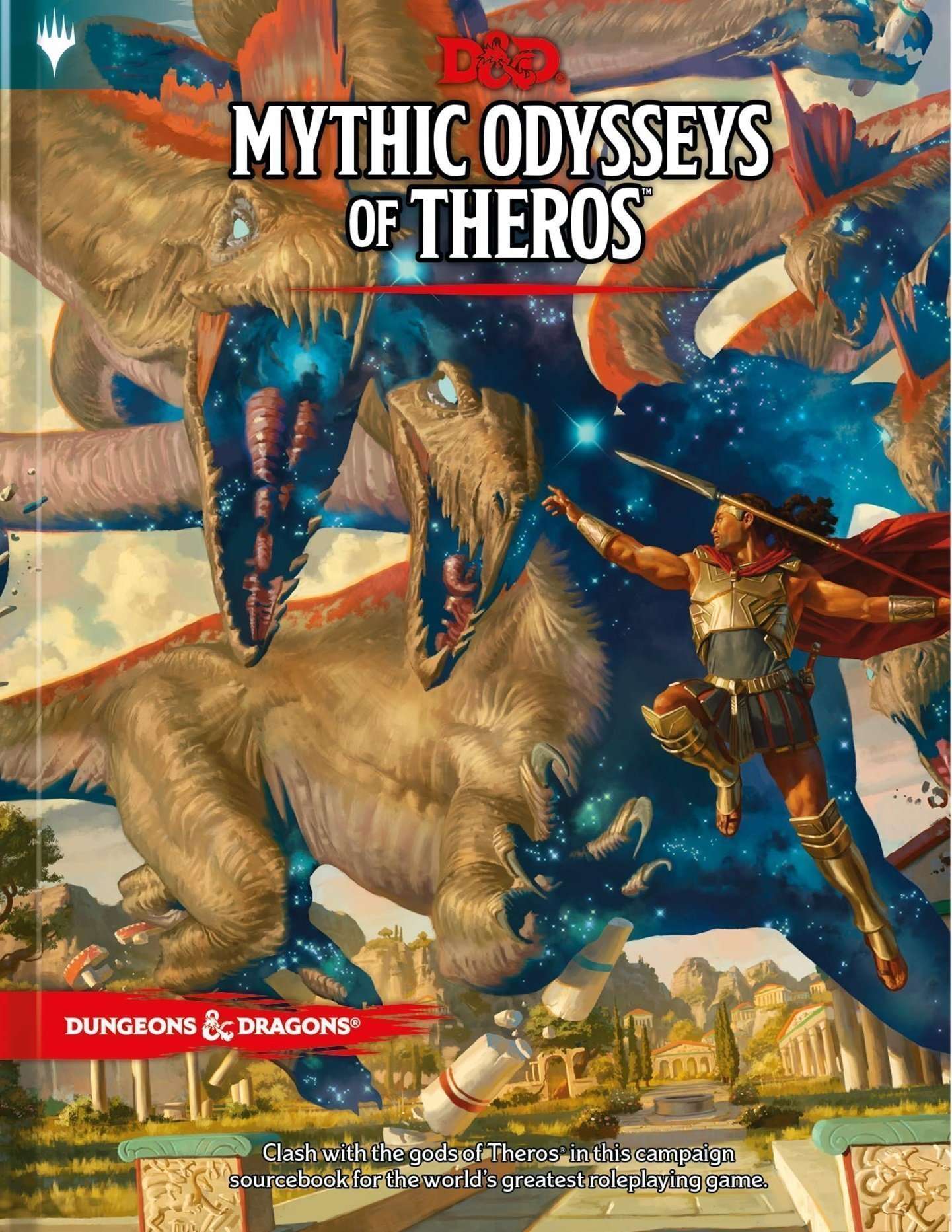 It’s been a few months since I’ve made a Dungeons & Dragons related post. But I’m back today to discuss one of the latest D&D releases, The Mythic Odysseys of Theros. Now, this is a book that I wasn’t really sure about before I actually got my hands on it. The marketing materials that came out in advance of this release were as clear as mud. After reviewing the initial announcement, all I knew was that this book was that it was another Magic the Gathering/D&D tie-in. I’m not a Magic guy. So, I wasn’t sure if this was a campaign sourcebook, some kind of addendum to The Guildmaster’s Guide to Ravnica, or an old fashioned “Deities and Demigod’s” style collection.

To start, this is in fact a campaign sourcebook. The world in question is called Theros. Theros is a campaign setting that is largely inspired by Greek-mythology, but it has its roots in the Magic the Gathering card game. So like Ravnica, Wizards of the Coast is once again borrowing a setting from MtG and migrating into Dungeons & Dragons.

Like any D&D campaign gazetteer, the first half of this book introduces the world itself, its people, religions, and history. As expected, there’s a few new racial options that are very “greek” themed (centaurs, leonins, minotaurs, etc). Previous D&D releases have introduced some of these races as playable options in the past. But this book puts a very Theros-specific spin on them There’s also a number of new subclasses and backgrounds for players to sink their teeth into.

Like the myths of ancient Greece, there is a very tight connection between the world of Theros and the pantheon of gods that watches over it. For this reason, the last half of the book takes a very in-depth look at the gods and the religions surrounding them. It also includes a short adventure and a trove of new magic items, and campaign-specific monsters.

The contents of this book are intriguing and well presented. The authors did an excellent job of taking Theros and adapting it to a role-playing setting. Personally, playing D&D in this type of world doesn’t seem particularly appealing. I love greek mythology, don’t get me wrong. But when I sit down to play D&D, I’m very much looking for a classic swords and sorcery experience. That being said, there’s never anything wrong with trying something new and Theros might be exactly what you’re looking for.

Like the Ravnica sourcebook, this guide provides DMs with everything they will need to get started in the world of Theros. But I don’t expect a plethora of additional content in the future. It seems like WoTC’s plans for these one-off campaign settings is to introduce the world in an official release, then let fans and third-parties develop content through the DM’s Guild.

If you’re a Magic the Gathering fan or a greek-mythology buff, this book should definitely be on your radar. If you’re a casual player, this is probably one you can skip over. For those DMs like me, even though I don’t plan on running a Theros campaign at any point in the future, books like these are always valuable in one way or another. The bestiary at the end of the book is filled with some pretty good nasties to throw at unsuspecting players.

Either way, just go into this one knowing that it’s a very niche product.