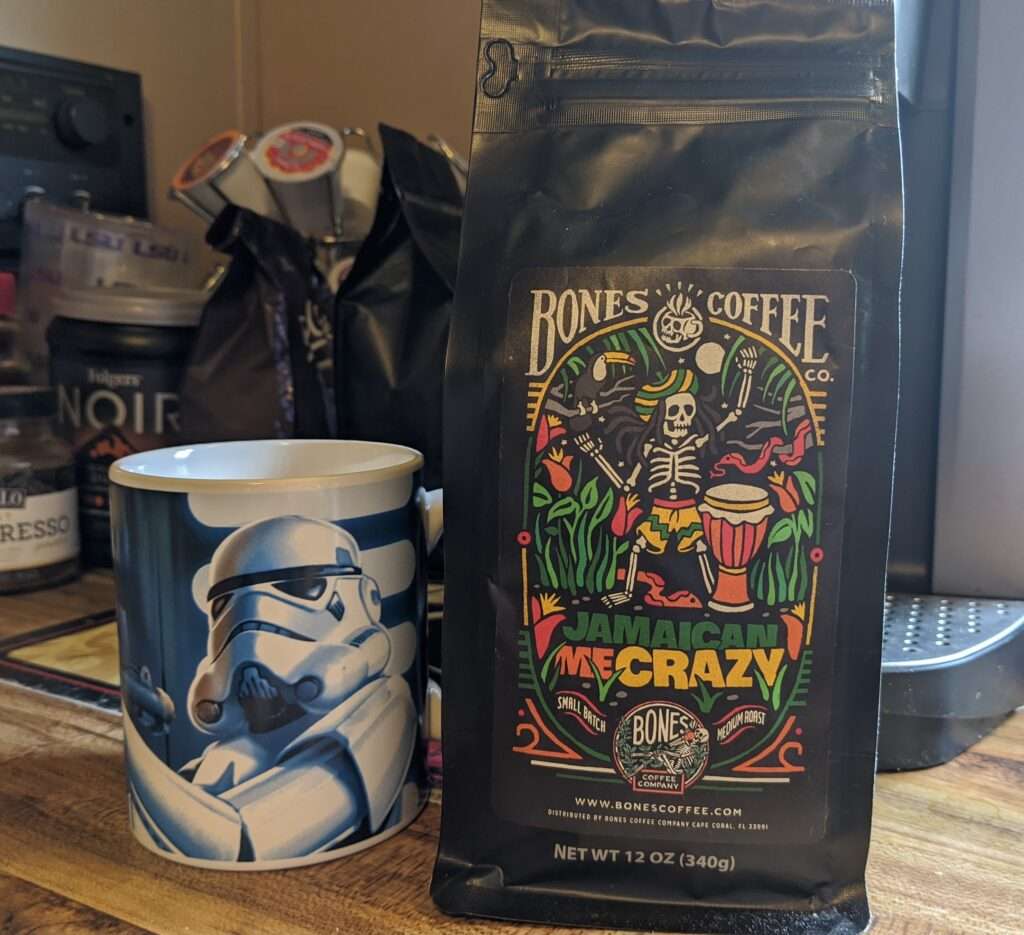 As summer winds down, so does my search for the perfect seasonal coffee. It’s no secret that I’ve recently been obsessed with all of the offerings from Bones Coffee Company, so I’m back again with another one of their many flavors. Today, I’m taking a look at Jamaican Me Crazy.

“Jamaican Me Crazy” is a name that you may have heard of before. Many brands have some version of it. Typically it’s a combination of Kahlua, hazelnut, and caramel. I’ve even seen a view varieties that replace the Kahlua with rum. When done correctly, it can really be a great brew. But more often than not, most brands use cheap, over-sweet flavoring and it just ends up tasting terrible. So far, Bones Coffee has really impressed me with the quality of their flavored coffees, so let’s see if the trend continues.

In the case of Bones Coffee, their Jamaican Me Crazy is a little different. Instead of Kahlua, caramel, and hazelnut, their version is made up of Kahlua, caramel and vanilla. The aroma of Kahlua is very apparent during the brew process. This also carries over to the taste of the coffee as well. The Kahlua is front and center, but somehow it manages not to be overpowering. The caramel and vanilla are subtle, but there, especially in the finish. I actually think that I like this combination a bit better. Hazelnut is a pretty powerful flavor. I think replacing it with vanilla was a smart move. Vanilla doesn’t clash with Kahlua the way that hazelnut would. And I think it really makes this flavor that much better. Even so, the overall flavor is just a little sweeter than I’d like – but that’s very much a personal preference.

As hoped, the flavors in this brew taste natural. Which is a big plus with me. There’s nothing I hate more than buying a flavored coffee only to have the beans overpowered by some disgusting, plastic-tasting syrup. I don’t know how Bones Coffee does it, but their flavors are always spot-on. This coffee is pretty good hot, but like many “sweet-flavored” coffees, I think it this particular variety would also do quite well over ice.

All in all, this another quality flavored coffee from Bones. On a personal note, I’m not the biggest Kahlua fan so it definitely hasn’t been my favorite. But the quality should be obvious to anyone who drinks it.

Would buy again?:  Maybe. The quality of this brew is not in question. It’s a really solid offering. But for me, it’s just not something that pushes my buttons. That being said, it does seem to be a great coffee for these warmer months. Especially when served over ice as a latte. If you like Kahlua, you’re bound to enjoy this.