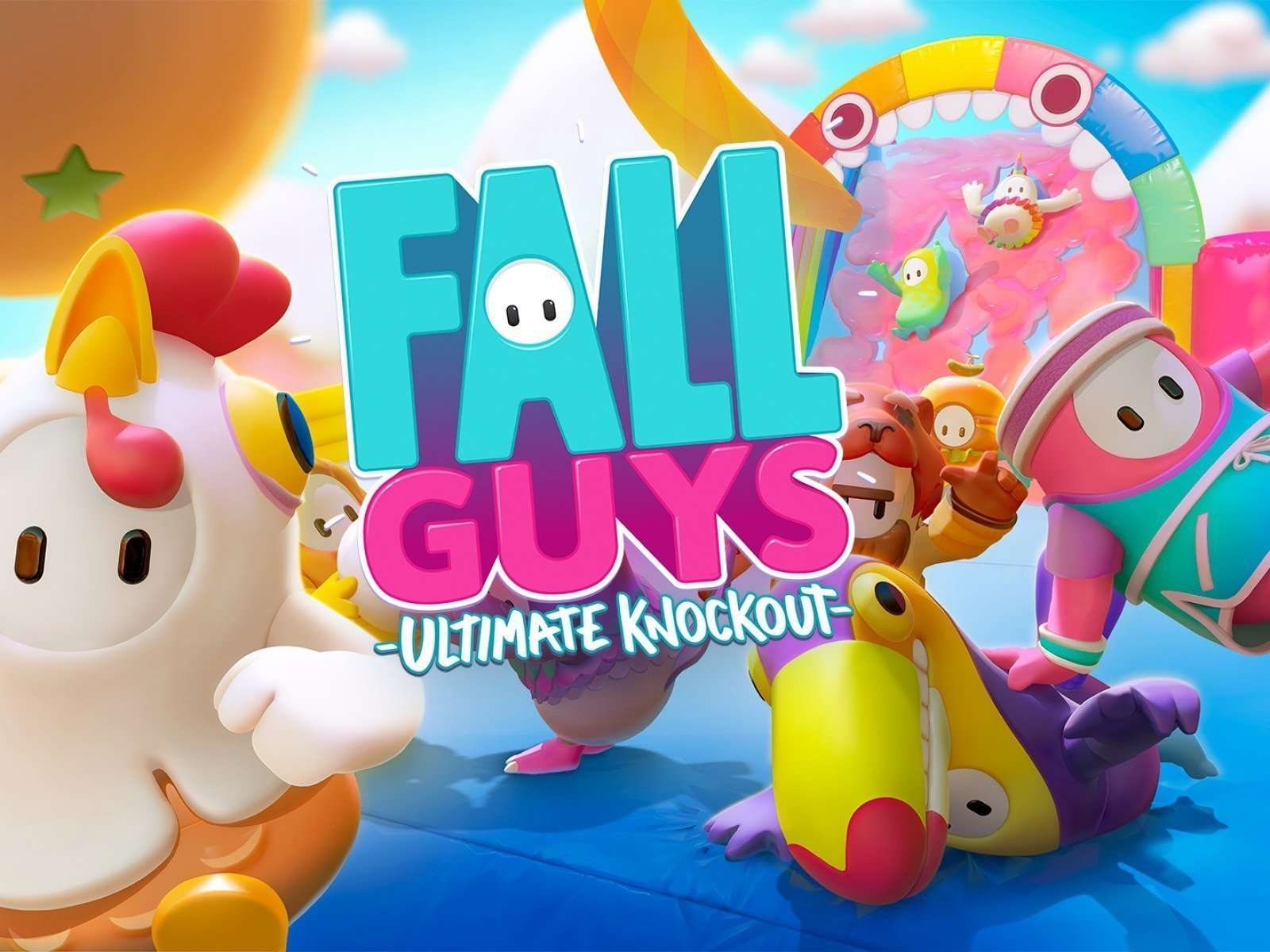 I’m taking a break from the retro gaming to check out one of the hottest games in recent history. If you follow gaming at all, you’ve probably heard of Fall Guys. It’s a colorful, silly-looking battle royale game modeled after those ridiculous Japanese Game shows – and it’s taken the world by storm.

When I was a kid, I spent three years living in Japan. This was during the late 80’s to early 90’s and we didn’t have cable or satellite television. The only television stations we had access to were one English-speaking military channel and three local Japanese networks. More often than not, I turned to Japanese TV for entertainment. One of my favorite things to watch were the crazy Japanese game shows like Takeshi’s Castle. In case you’ve never seen it, Takeshi’s Castle is a game show that features numerous contestants. The goal is to raid a “castle” that’s filled with obstacle courses and traps. The game ends when a contestant makes it through all of the stages laid out for them. Typically, these obstacle courses consist of things like leaping on floating foam platforms to cross a pond of water, or running head-first into doors (and hoping the door in front of you is made from foam blocks instead of wood). To make matters worse, while the contests are doing this, they are usually being targeted by water hoses or being chased by someone in a giant inflatable monster costume… Yeah, weird stuff.

Well, Fall Guys is essentially that. In this game, you control a jelly bean-like character that you can customize with a variety of costumes and colors. You are paired with up to sixty other contestants as you navigate your way through various obstacle courses and mini-games. Each round has certain conditions to be met, meeting them ensures that you live to move on to the next stage. Failing to meet the goal means you are eliminated from the game and must requeue and try your luck again. 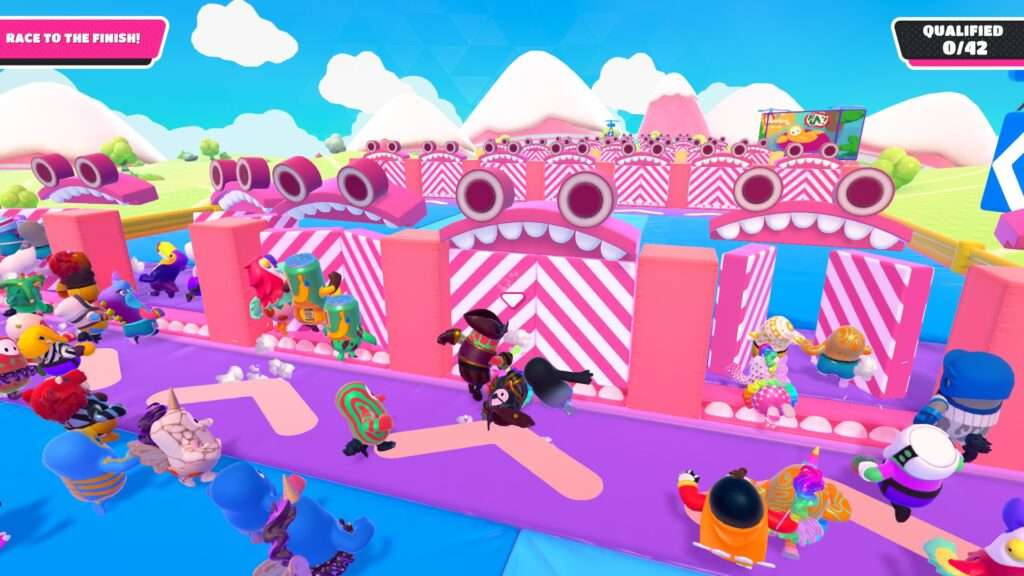 Some of the levels are nothing more than glorified races where the first X number of contestants will be counted as winners. The course is filled with things like see-saws, spinning floors, fake doors, etc. Other courses find players paired up into color-based teams where they must play various games (ex: soccer) against teams of other colors. For these team-based games, coming in last results in the elimination of every player on that team.

The ultimate goal of every game is to make to the last round and be the only player to capture the coveted crown. These crowns can be redeemed for rare cosmetics and costumes for your character. Of course, winning a crown is VERY difficult. So even if you can’t capture one, you still get tokens (called Kudos) for participating. These tokens can also be redeemed for items, but the selection is limited. (The really good prizes cost crowns) Tokens can also be purchased for real money, but crowns can only be received as an in-game reward.

Content in Fall Guys is being rolled out in seasons. At the time of this writing, the first season for the game is winding down. When season 2 starts, players can expect to look forward to new courses and new prizes. 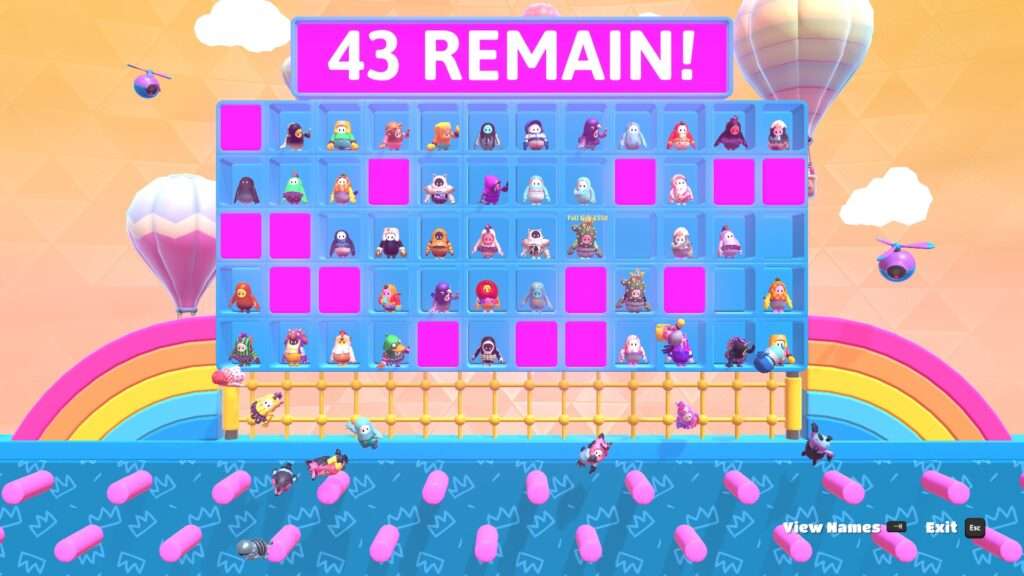 Essentially, that’s the whole game. There’s not much to it, and the basics are simple to learn. Plus, game sessions can be as short or as long as you need them to be. So even though Fall Guys is simplistic in its presentation, it has managed to be very popular.

When I first started playing the game, I actually found myself to be quite good at it. The first day I played I frequently made it to the last round. However, as time has gone on it seems like either the game has gotten harder or I’ve gotten worse at it. To date, I’ve only ever captured the crown on one occasion. The last few times I’ve fired up the game, I can barely make it past the first course.

Now, this game has fallen under fire for rampant cheating. In those first few weeks the game was live it was not uncommon at all to see other players just flying around the map going straight from start to finish. However, it’s my understanding that the game developers have since implemented some pretty strict anti-cheat measures. So I don’t think the uptick in difficulty I’m experiencing is due to cheating by other contestants. Perhaps it’s just the fact that more casual gamers have already moved on, making the competition in the game THAT much tougher.

Either way, I have to admit that my interest in the game has faded pretty quickly. When Fall Guys first launched in August, I played it nearly every day. Now, I might fire it up once or twice a week when I have fifteen to thirty minutes to kill. That doesn’t mean Fall Guys in a bad game. In fact, quite the contrary, this game is fantastic and I can’t wait to see what future seasons have in store. But, games with limited content like these generally don’t hold my interest for very long. We’ll see what happens with time. 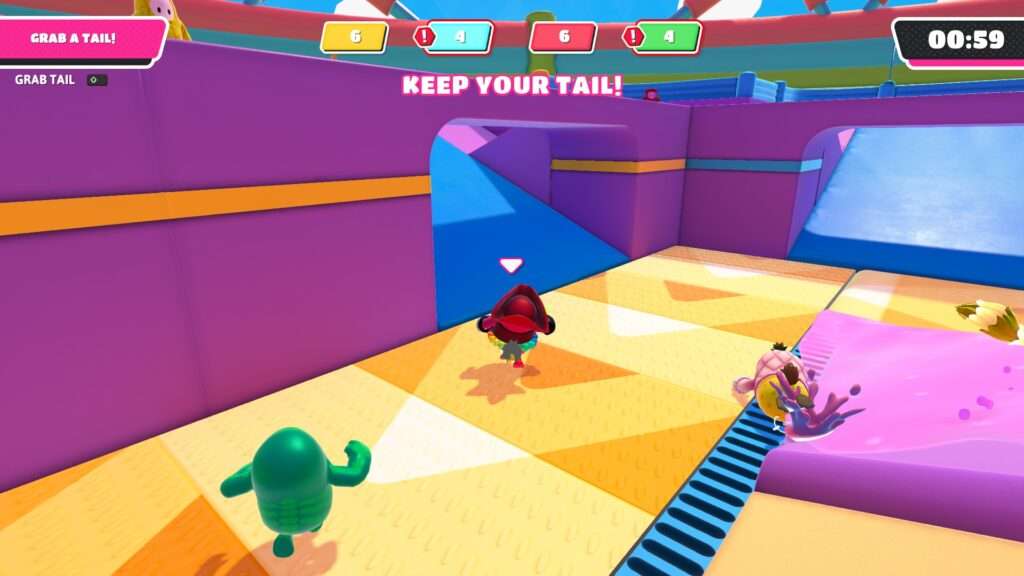 Difficulty: Variable – This game is played online against other players so the challenge will vary depending on the skill of your opponents. However, expect to lose – a lot. Like many battle royale games, the elitists always seem to be playing. So for the new guy starting out, it’s a hard climb to the top.

Story: There’s not really any sort of story or background lore for this game, nor does there need to be. Falls Guys is a fun, silly competition. No elaborate set up is needed.

Originality: Battle Royale games are nothing new. But most of the time they come in the form of shooters. Having one presented like a quirky gameshow is both fun and refreshing.

Soundtrack:The music in this game is upbeat and catchy. But it does get old pretty quickly. Hopefully as new seasons drop the music in the game will be diversified. But repetition aside, the score for the game is fitting and appropriate.

Fun: For me, I had an absolute blast with this game for the first few weeks. But now that the game has been out for well over a month, it’s started to get a little state. It seems that the vast majority of players still playing the game are the hardcore elite. This makes it tougher for a new player to get ahead.

Graphics: Cartoonish and colorful. This isn’t a game you play for breathtaking realism. But still, the graphics are modern and well done.

Playcontrol: When playing this game you have two options, mouse/keyboard or a controller. Either way you go, the default controls feel natural and are responsive. I’ve tried it both ways and I have to declare the mouse/keyboard combo to be the winner. This game is perfectly playable with a controller. But I found the mouse and keyboard provided quite a bit more precision.

Value: This game is available digitally at full price for around $20. Honestly, this is a pretty fair price for what you get. In-game currency is handed-out to some degree after every session. Still, I can foresee a time when this game might switch to a free-to-play model.

Overall score (1-100): 80 –Fall Guys is a fun multiplayer romp. It’s lighthearted and not meant to be taken too seriously. In a time when most games are marketed towards mature audiences or spin complex epic tales, it’s nice to have something fun and simple to play. My biggest gripe with the game is that it seems to have been overrun by extremely competitive players. When it first launched, it felt much more laid back. Now, that vibe is largely gone. Another weak point is that all of the matchmaking in the game is random. There’s no option to play with friends. I understand that this is done to prevent players from teaming up and rigging the game. But still, this type of game could really make for some fun times if you were able to play with people you know.