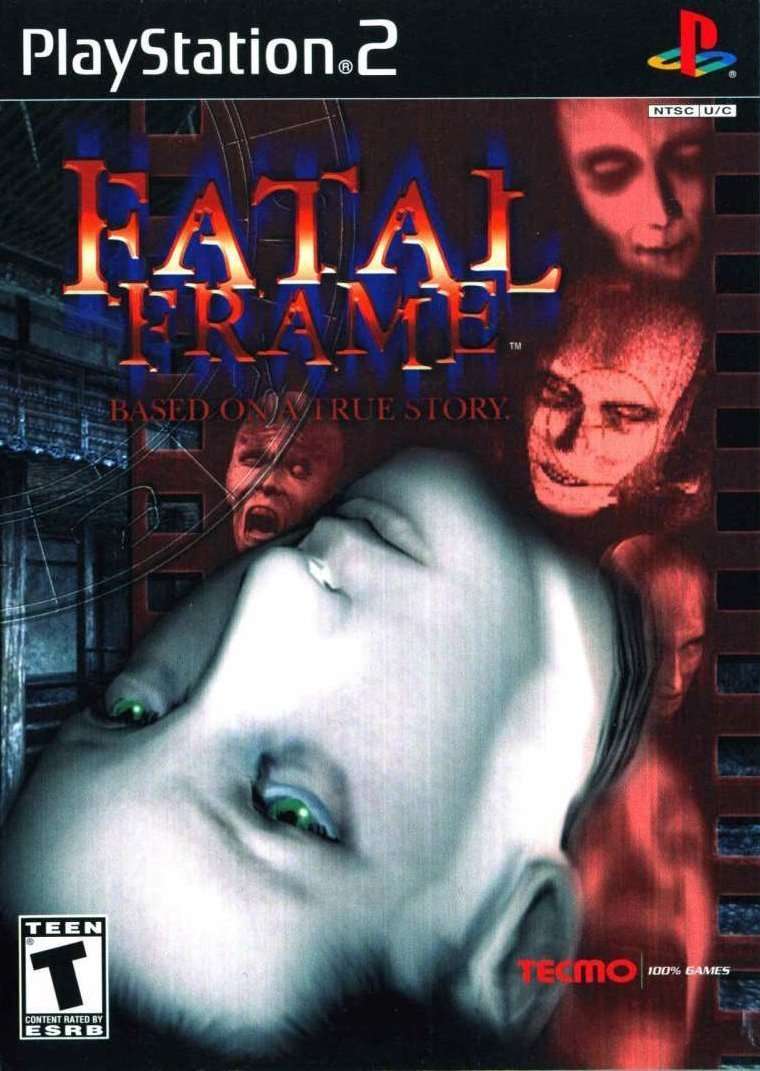 Happy Halloween! That’s right, it’s here again; my annual spooky game review. This year, Halloween finds me with a fresh new promotion at work. One that actually has me working third-shift. So even on my days off, I typically maintain a routine of staying up all night. This new schedule has led to some serious late night gaming sessions. Of course, late nights and spooky games are the perfect combination. And this year, I have chosen a classic (but also mostly forgotten) PS2 title, Fatal Frame. If you’ve never heard of this game, you’re not alone. While Fatal Frame saw moderate success here in the US, it was largely overshadowed by other survival horror titles.

Originally released in Japan under the name Project Zero, Fatal Frame is an atmospheric, story-driven horror game. The game focuses on the character of Miku, a young Japanese woman who journeys to an abandoned mansion in search of her missing brother. Her brother was part of a team researching the history of the mansion (which is believed to be haunted). Both Miku and her brother are very sensitive to paranormal phenomena. So after losing contact with him for several days, she becomes worried that something terrible has happened to him during his expedition. Upon arriving at the mansion, Miku finds it completely abandoned. But scattered throughout the property are various notes and clues left by the research team. As Miku delves deeper into the mansion, she learns very quickly that the rumors about the site are true; the place is crawling with spirits and some of them are hostile. With all of these terrible ghosts roaming the halls and courtyards, will Miku be able to find her brother’s fate before falling prey to the malicious spirits? That’s up to the skill of the player to determine…

A large portion of the game is spent exploring the creepy rooms and corridors of the mansion, collecting clues, and solving puzzles. During this time, the player will also encounter a number of ghosts. To both detect and combat the mansion’s ghosts, Miku uses the “Camera Obscura” – a special camera that has the ability to capture ghostly images on film. In this game, photographing ghosts drains some of the power they need to manifest. So by taking well-timed pictures, Miku is able to fight back against attacking spirits. 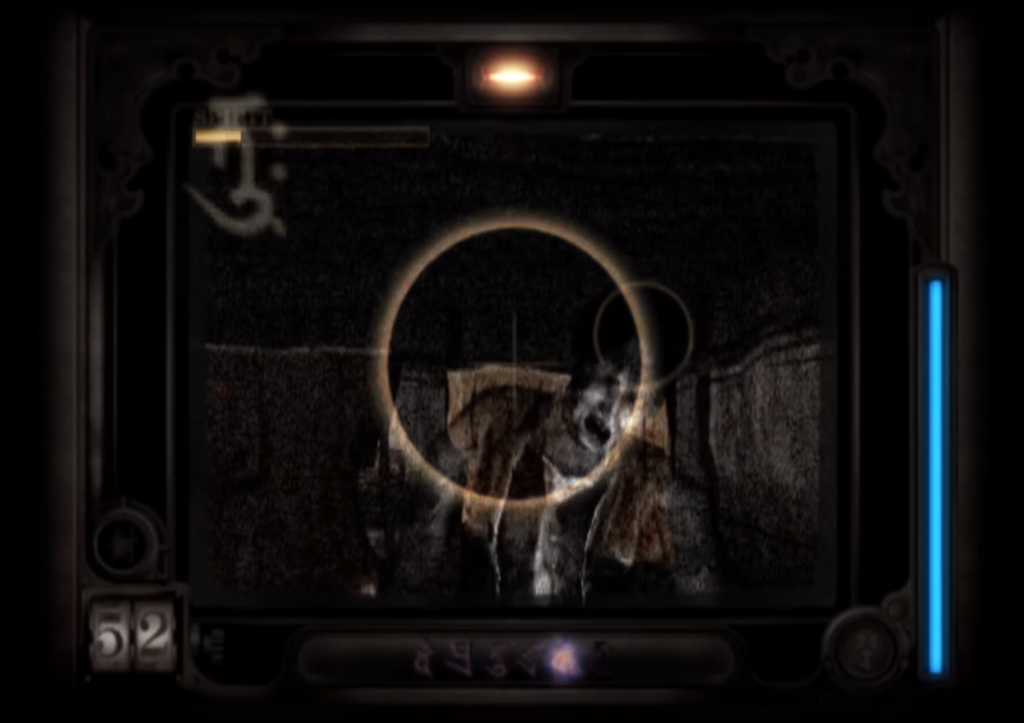 In many ways, Fatal Frame is similar to other survival horror titles of the era. The player is able to explore the environment as they wish. However, progress is often halted by obstacles like locked doors. The game mostly takes place in a third person view. But when using the camera, the perspective shifts to the first person. Occasionally, you will encounter hostile spirits that will attack on sight. Each spirit has it’s own quirks. Some move slowly and pose little challenge. While others charge at you or teleport around the room, making capturing them on film a challenge. When Miku is attacked by ghosts, these attacks will drain her lifeforce. If her life meter reaches zero, she will perish and it’s game over.

Not every ghost in the mansion is evil. Some of the spirits in this game are merely phantoms, others are there to help provide backstory. As you explore the mansion you will occasionally come across a wandering ghost. These spirits only manifest for a few seconds and can often be very tough to capture on film.

When doing battle with a spirit, the goal is to keep the entity in the camera’s reticle for as long as possible before snapping a picture. The longer the camera can stay focused on the ghost before a picture is taken, the more damage the shot will do. Every ghostly picture taken is assigned a point value (even the non-hostiles). These points can be used to upgrade the camera’s features. (For example, increasing the viewing range or the power-charging speed.) 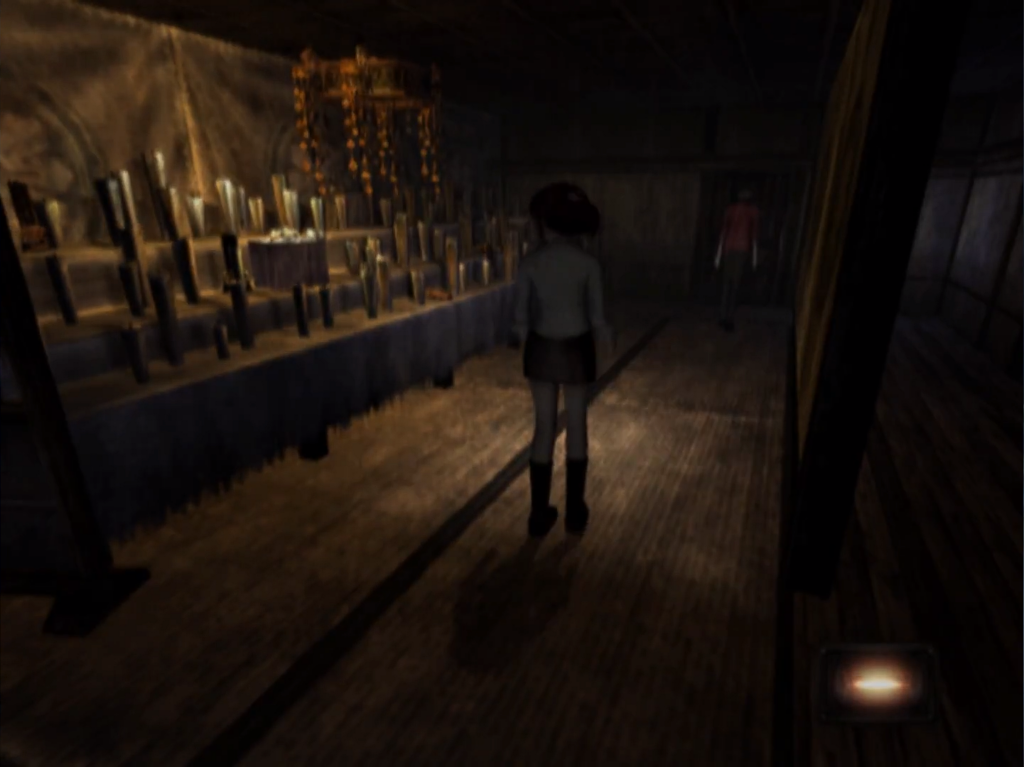 The game scenario is split up over three nights. At the beginning of each new evening, many things in the mansion change. There’s new ghosts to find and new clues and power-ups tucked away. So even through there’s plenty of backtracking, it’s wise not to get too comfortable. There’s always something new lurking around every corner.

All of this makes Fatal Frame a fairly unique and effective survival horror. The pacing of the game is perfect, the environments are creepy and interesting, and the scares are more mysterious and chilling than just flat-out frightening. The one area the game suffers is in the control scheme. While walking and navigating in this game isn’t as cumbersome as the early Resident Evil titles, switching back and forth between the camera and third-person view is very non-intuitive. Plus, the buttons seem very touchy. More than a few of the game’s hidden ghosts were missed during my first playthrough as a result of the overly-sensitive controls.

For people interested in playing this game, there’s two options. First, the original PS2 release (which is available on PSN for PS3 consoles), and the original XBox version. Of the two, the Xbox version is probably the definitive edition. This release features a few extra ghosts, some UI enhancements, and slightly better graphics. The downside is that it’s not available digitally so it can be hard to get a physical copy.

In a number of ways, Fatal Frame will immediately feel familiar to fans of other survival horror games. The overall tone and atmosphere has been seen before. But it’s the “spirit camera” and the unique combat system that really sets this game apart from all the others. This is one underrated classic that’s worth a look. 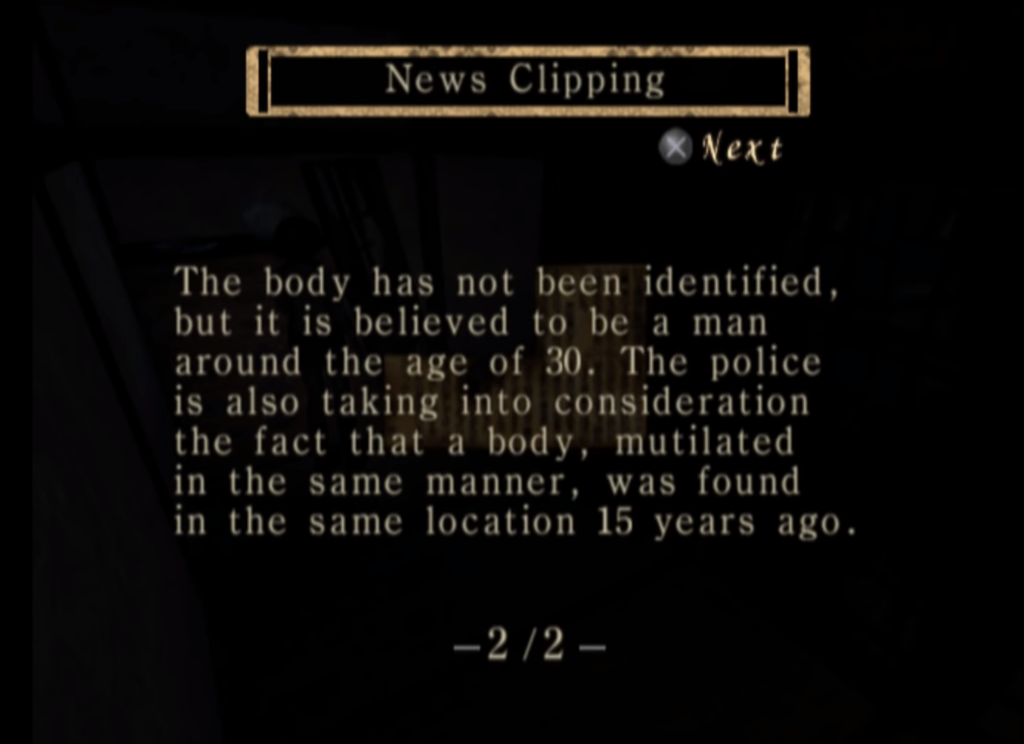 Difficulty: Hard – The first half of this game is actually not that difficult. Yes, there are a few tough ghost fights. But generally speaking, there’s nothing that most players won’t be able to handle. The challenge actually kicks in on the final night of the game. During this portion, there are more than a few really tough battles. On top of that, there’s very little health restoratives and film for the camera scattered around on this chapter. This means that unless players did a good job conserving their resources, they are going to be in for a really tough time. Once the game has been completed, an optional hard mode becomes available for players to try. This mode of play is only for the most hardcore players.

Story: Fatal Frame tells a very interesting tale. The opening cutscene does a great job of setting this up and the plot continues to unfold as the game is played.

Originality: By the time this game was released, the survival horror genre was pretty well established. This game is unique because of its approach. Using spirit photography and Japanese folklore as a foundation really allows this game to provide a fresh experience.

Soundtrack: The music in Fatal Frame is very minimal. In fact, it’s pretty much limited to the title screen. The gameplay itself is filled with weird, ambient sounds. Honestly, these noises do a much better job of giving this game its creepy feel than any musical score could.

Fun: I enjoyed the atmosphere of the game quite a bit. The storyline is also intriguing and well done. The biggest buzzkill for me were the funky controls and the difficulty it caused during combat.

Graphics: For its time, Fatal Frame was a superb looking game. It does show its age by today’s standards, but still manages to hold up well. The use of lighting and the creepy level design are top notch visuals.

Playcontrol : As if often the case with these early survival horror titles, the playcontrol is just not particularly good. As far as character control, Fatal Frame actually beats out the Resident Evil titles hands down. But it’s the camera controls and the transition between the third and first person perspectives that ends up falling flat.

Value: This game is available on PSN for $10 and is very much worth the price.

Overall Score (1-100): 75  – In the end, Fatal Frame is a solid survival horror experience. It’s full of atmosphere and tension. And the storyline is both unique and interesting. My biggest issues with the game are the confusing controls and the repetitive gameplay. On it’s own, is a pretty solid title. But when compared to other games of the same genre, it just just quite reach the bar.