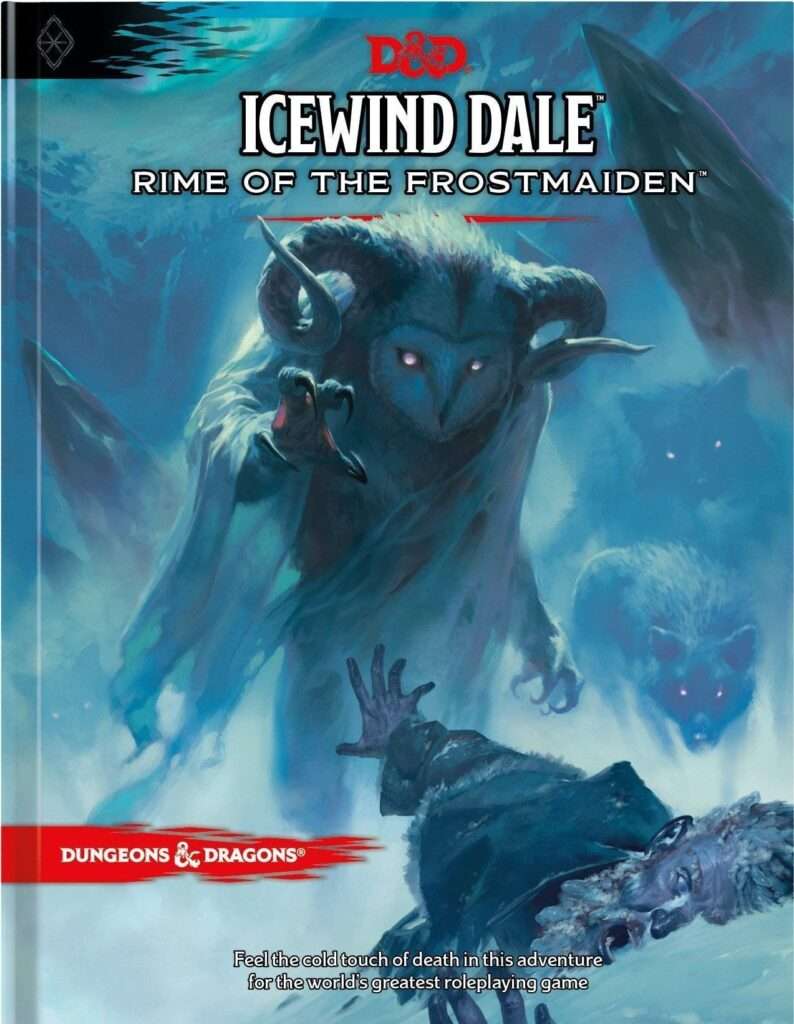 Icewind Dale; one of the northernmost reaches of the Forgotten Realms. An area famous for being an untamed artic wilderness filled the frightening monsters and undiscovered treasures. It’s an isolated region where only the hardy survive. Its frigid environment makes it the perfect setting for this time of year. So it’s fitting that it is also one of WotC’s most recent D&D releases.

Rime of the Frostmaiden is an adventure designed for four to six characters and it will take take them from level 1-11. Like most of the 5E adventure books, it’s designed to be a complete campaign filled with weeks of adventure – and trust me, there’s plenty packed into this book.

This release is a little odd. The presentation here is a bit different from any other 5E module thus far. Yes, the book contains a well organized adventure. But it is peppered with chapters of content that almost seem to be something you’d find in a sourcebook. It very much serves as the official 5E presentation of Icewind Dale. The end result is a product that has a bit of a hybrid feel to it.

The adventure itself also feels very different that anything I’ve seen before. It’s marketed as being a single campaign, but the first half actually feels more like a handful of smaller adventures that are linked together by nothing but the location in which they take place. The second half of the book does seem to tighten things up a bit. But still, this whole module is very “open” in its format. Some people will like this, others will not. Either way, this is not something that a rookie DM should attempt to tackle without lots of preperation.

Recently, WotC’s D&D releases have really shifted focus away from the classic “grognard” products to things that are more likely to appeal to the younger generation. The way the adventure is written very much caters to today’s livestream audience. It’s punchy, action packed, and filled with dramatic moments. We are in a new generation of tabletop gaming and this book is a prime example of that.

No matter how you feel about the state of D&D today, Rime of the Frostmaiden is a quality product. The adventure is well written and full of twists and turns. The presentation is fresh and there’s hours of entertainment included within these pages. But unless you plan to run the adventure, there’s not a lot of fluff in the book that you’re likely to find useful elsewhere.

Gain access to:
- Library of #Nintendo64 & SEGA Genesis games
- #AnimalCrossing: New Horizons – Happy Home Paradise at no additional cost
- All other benefits of a #NintendoSwitchOnline membership

Workers at Paizo unionize, a first for the tabletop role-playing game industry https://www.polygon.com/tabletop-games/22726765/paizo-workers-form-union-demands-cwa-pathfinder-starfinder?utm_campaign=polygon&utm_content=chorus&utm_medium=social&utm_source=twitter

DC just dropped a collection of free NFTs for DC FanDome. I got Jace Fox, Batman. To get your free NFT, register for DC's FanDome event at http://dcfandome.com #DCComicsNFT #DCFanDome

Square Enix's Takashi Tokita wants to create a Pixel Remaster or 3D Remake of Final Fantasy IV: The After Years, the 2008 sequel to the SNES classic:
https://www.rpgsite.net/news/11850-square-enix-s-takashi-tokita-would-like-to-create-a-pixel-remaster-or-3d-remake-of-ff4-the-after-years

Sony has opened up a new registration system that will give users a chance to buy a PS5 this holiday season. https://bit.ly/3p0iFie

People have asked me if I'm going to suspend my GTA Vice City review and start over when the Trilogy comes out... It depends. If the "definitive" version doesn't have all the original music... it's not that definitive.

🚨ALERT🚨 from #NYCC: Be the first to witness the origin of Evil in the ☣️NEW TRAILER☣️ for #ResidentEvil: #WelcomeToRaccoonCity.
See it exclusively in movie theaters November 24.
http://ResidentEvil.Movie