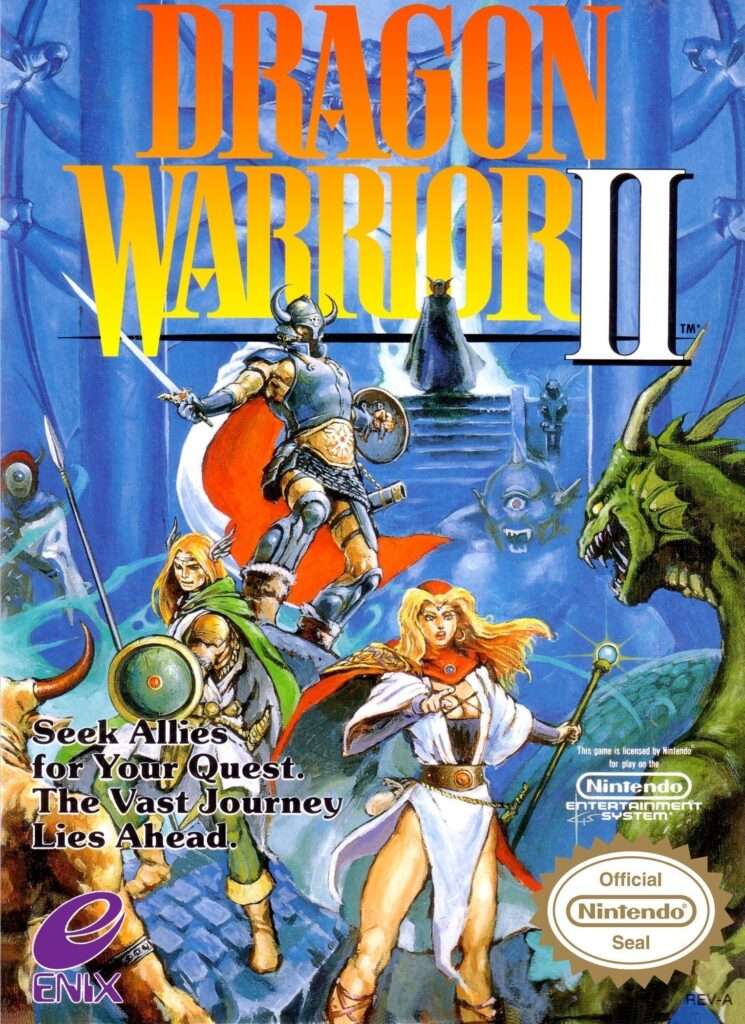 Today, I’m going to share my thoughts on a retro RPG classic, Dragon Quest II. Back in the spring, I talked about the first game in this iconic series. If you’re not familiar with these games, I would urge you to check out that review before reading any further. Much of what I’m going to be discussing in this post will piggyback off of details found in my review of the original game.

So, assuming you’ve read my prior review, let’s take a moment to discuss some of the basics. As was the case with the original game, Dragon Quest II was also initially released in the US under the Dragon Warrior branding. The original version was released on the NES in 1990. This was followed by a remake for the Game Boy Color in 2000. For the longest time, these were the only two official versions of the game available to western audiences. In 2014, an enhanced version of Dragon Quest II was released for mobile platforms. As was the case for the original Dragon Quest, this mobile version was used as the basis for what later became the Nintendo Switch release of the game. For most gamers, it is the Switch version that is easiest to get ahold of. This is also the version of the game I played for this review.

The story for Dragon Quest II takes place several generations after the events of the original game. The tale begins when the evil wizard Hargon attacks the peaceful Moonbrooke Castle. During the attack one of the castle’s soldiers escapes to the nearby kingdom of Midenhall where he informs the king of the terrible attack. After careful consideration, the king decides to send his son, the Prince of Midenhall, to deal with Hargon. The Prince is main character of the Dragon Quest II. However, during his journey he will seek out and recruit his two cousins to assist him with his task 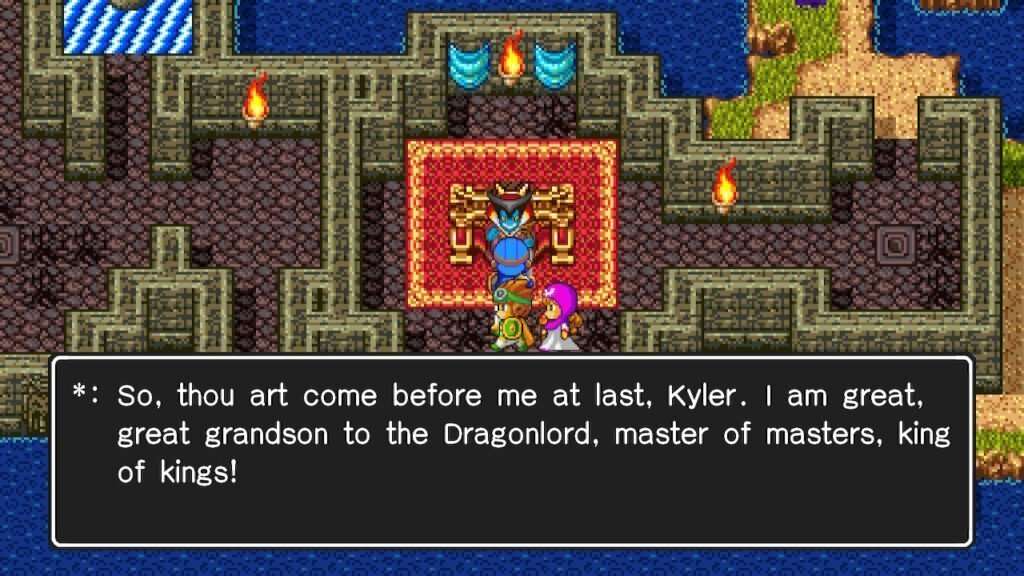 For the most part, the majority of Dragon Quest II is very similar to the original game. It is a top-down JRPG with random encounters. Over the course of the game the player will explore, battle monsters, and talk to NPCs. The biggest difference between this title and the first Dragon Quest game is the party system.

The original game featured only one playable character. However, in this title players will seek out and recruit two additional members. This means by the time the game really gets going, the player is in control of a three-person party. This change really makes Dragon Quest II feel much more like other JRPGs of the era. The three members compliment each other well and really give this game some the extra spice that was sorely missing from the first chapter in the series.

I personally enjoyed the way the party recruitment unfolds. As you play, you will uncover clues as to the whereabouts of the other characters. Only by paying attention and seeking them out will they be added to the roster. It’s all very interactive and I found this to be better than just starting the game with a full crew. It allows fans of the original to step into the concept of managing more than one character. 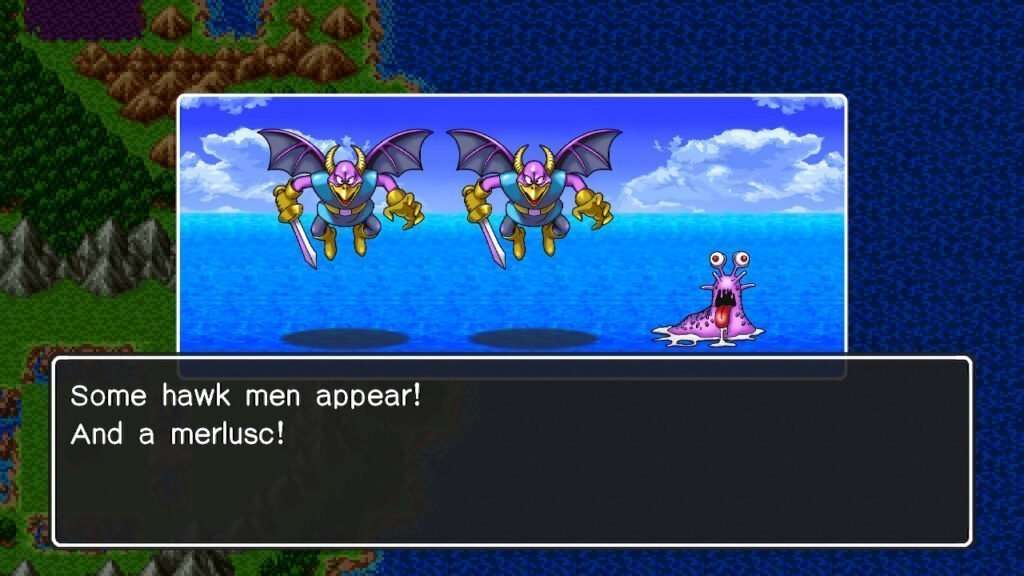 With the inclusion of the new party system, it seems that the developers decided to ramp-up the difficulty of the encounters this time around. I found that many of the battles throughout the course of the game seemed considerably more difficult than they should have been. Not only that, but the frequency in which they occurred was much greater than in the original game. It was not uncommon for me to find myself engaged in a new battle after taking only two or three steps – something that ends up being absolutely maddening when you’re in pursuit of a goal.

Naturally, I was able to grind my way up to a level high enough that these issues were a mere annoyance. But still, the whole thing seems like a major flaw in the game design that really should have been fixed.

Despite this complaint, Dragon Quest II is very much an improvement over the original. This game keeps the art style and wonderful music that was such a hit in the first game, but combines it with a storyline that is much more compelling. Plus, the new party system makes battles much more tactical and fun. Fans of classic JRPG games are likely to revel in this release. Plus, there’s plenty of puff-puff action to go around. 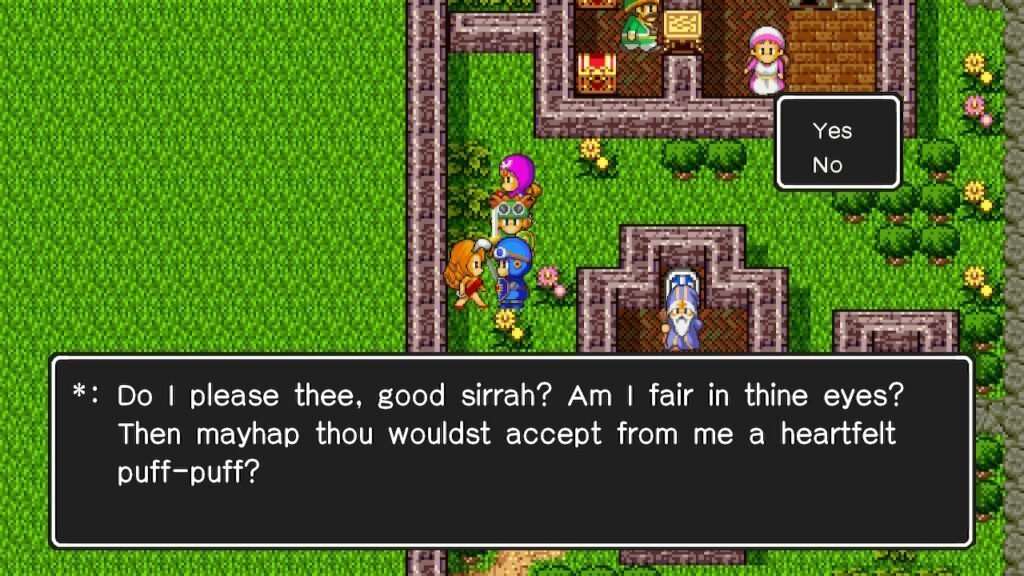 Difficulty: Hard –  I never played the original release of this game. But I’m told that it was much more difficult than the modern version. If this is true, I can’t imagine how dedicated someone must have been to see it through to completion. This game started off tough and stayed that way to the very end. Even with several hours of dedicated grinding, I would often find myself ending major battles with one or two characters defeated. The balance seems very off in this title.

Story: This game takes the lore set up in the first Dragon Quest and builds off it in a fantastic way. The first game seemed a bit hokey at times. But in this entry, we play a character who lives one hundred years after the events of the original chapter. This gives everything from the first Dragon Quest a very “legendary” feel. It’s a demonstration of world building at its finest.

Originality: While there’s a few new concepts introduced to the series in this title, it’s all things that have been seen before in other games. The originality here doesn’t really come in the form of gameplay, but instead in the colorful anime-like presentation.

Soundtrack: Again, this is one of the best aspects of the game. The music composition is amazing. The soundtrack for this game is masterfully written and a joy to listen to. The music gives this title a regal and fantastic feel that’s rarely achieved.

Fun: Players who enjoy retro RPGs or JRPGs in general are likely to find this game enjoyable. Modern RPG gamers may find this one to be a bit antiquated, if not flat-out brutal. The frequency of the random encounters seem excessive and many of the battles are downright punishing.

Graphics: These games are famous for their art direction. The concept art was designed by Akira Toriyama, the artist responsible for Dragon Ball. This is seen in all of the promotional materials for the original Japanese release and it carries over into the game itself. The original 8-bit release looks pretty rough at times, even for an NES game. It’s not bad, but it certainly could have been better. The Switch release, is hands-down the best looking version of the game. Most of the monster art actually looks hand drawn in this version and the rest of the graphics are vibrant and colorful as well. The only aspect of the remaster that seems out of place is the main character himself. The character model just seems a little oversized and awkward looking in this version.

Value: The remake is available on the Nintendo Switch shop for around $7.00. For this price, it’s well worth it. If you’re looking for an original NES copy, you’ll be paying collector’s prices.

Overall score (1-100): 60 – Dragon Quest II is a good example of evolution. It takes everything found in the original game and offers a number of refinements and new concepts. These changes are enough to keep things interesting without making the game feel completely foreign to existing fans. My biggest gripe is the balance issues that seem to plague this title. But, if you’re able to look past this, there’s really a fantastic world to explore and great story to enjoy.