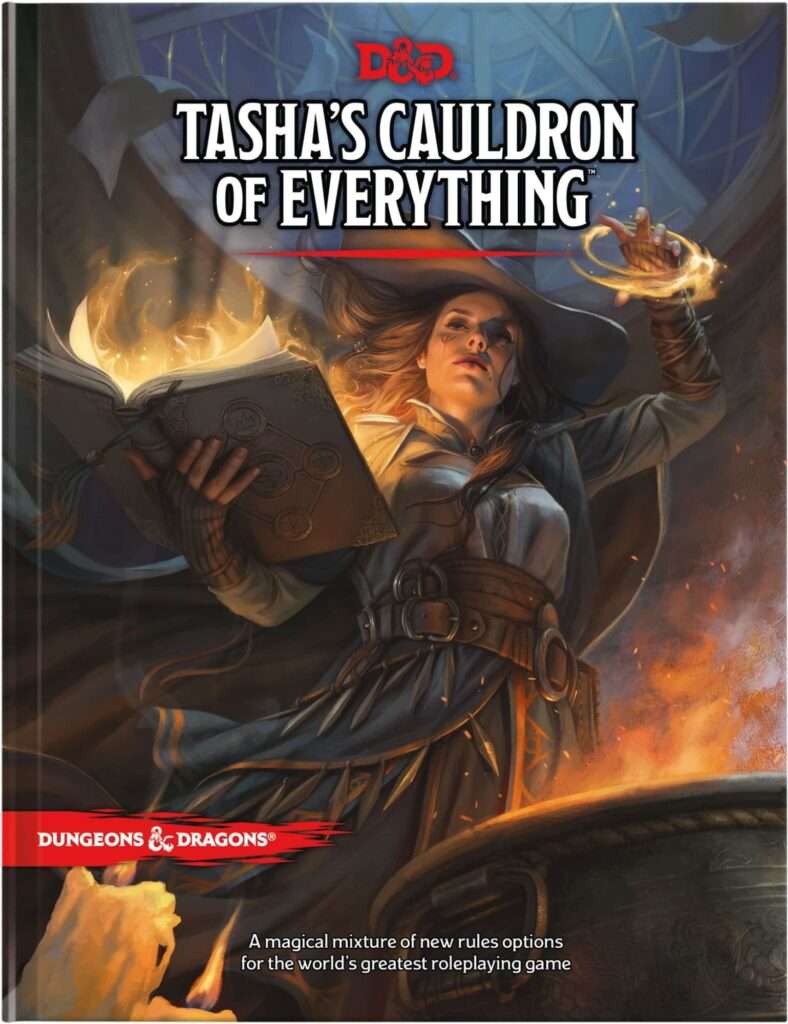 Dungeons & Dragons is more popular than ever. As a result, fans are clamoring for more options than what can be found within the covers of the basic Player’s Handbook. Since the release of the 5th Edition of D&D, there’s been a handful of releases that provided a few new options here and there. But up until now, only the Xanathar’s Guide to Everything has really given players something meaningful to sink their teeth into. That changes with the newest release in the 5E lineup; Tasha’s Cauldron of Everything.

Like Xanathar’s Guide, this book contains a slew of new character options, the majority of which were sourced from various Unearthed Arcana articles on WotC’s website. I suppose the biggest draw to this book is the inclusion of the Artificer class. This new character class saw its first official release in the Eberron sourcebook a while back. But it is now being introduced for play regardless of campaign setting.

Of course, the Artificer isn’t the only new option for players. This book also contains a ton of new subclasses, a new character origin option, new feats, and even rules for “group patrons” – an entirely new system to help establish character backgrounds and simplify party formation. I’m oversimplifying that a bit, as the system itself is quite bit more detailed. But that’s the general gist of it.

As you might expect with this type of release, there’s also a whole chapter dedicated to new spells. But unlike previous releases, most of these spells didn’t really seem all that interesting to me. Regardless, any new addition to the magic system is almost always welcome. Which brings me to the next part of the book: magic items. Tasha’s Cauldron of Everything also includes a ton a new magic items. Now there’s plenty of actual magical items detailed in this book. But, the most exciting “items” aren’t really items at all. Instead, this book includes rules for magical tattoos. These tattoos bestow players with a number of unique abilities. It doesn’t sound like much at first, but as you dive into the descriptions for some of these, they are really quite fascinating.

The final section of the book contains a number of options for DMs. These include providing tips on how to set up an effective campaign background, options for NPCs, tips for roleplaying, puzzle creation, and even some splatbook style environmental hazards.

For everything that this books gives players. There’s also plenty that isn’t included. For example, there’s no new options for character races. Plus the one new class that is included has already been released in a separate product. But, despite these complaints, we do have a pretty solid product.

All-in-all, I found this book to be a pretty welcome addition to my 5E library. Combined with Xanathar’s Guide, players now have a vast collection of options at their disposal.