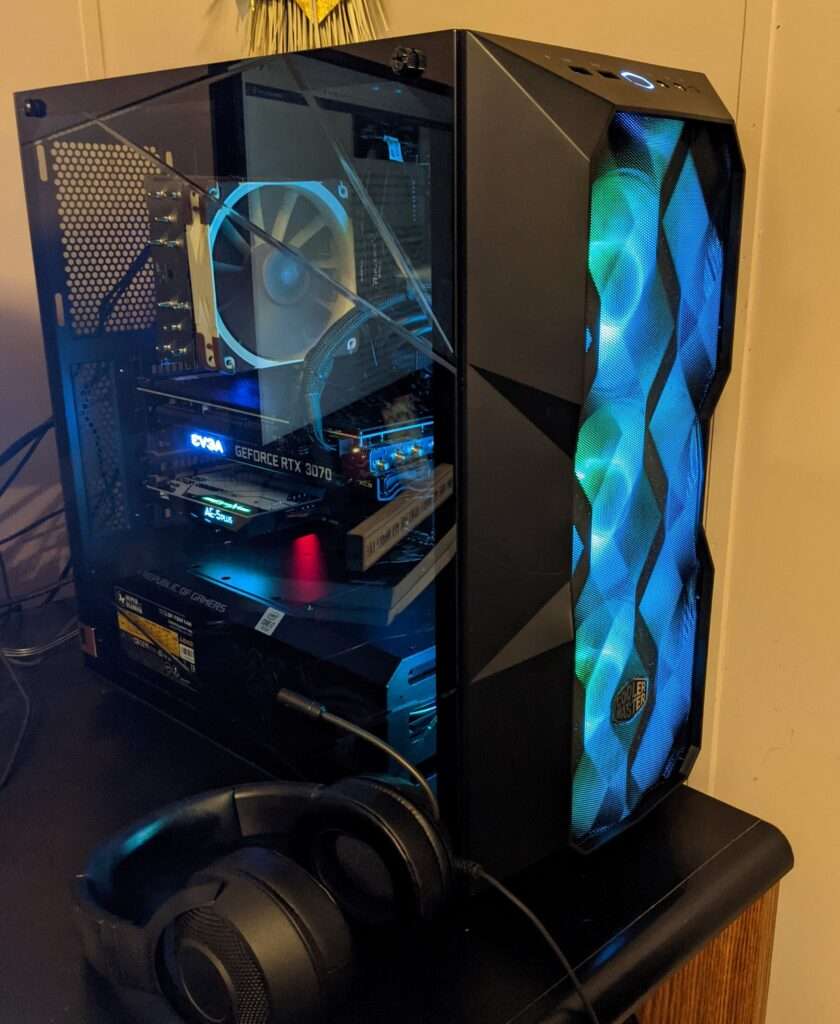 I know. Things have been a bit quiet over the last couple weeks. That’s because I’ve been busy with a new project… I built a new PC!

Yes, I know my last PC was only three years old. And it’s true, I typically keep my systems for five years or more. So what happened, you might ask? Well, there were a couple factors that convinced me that now was the time to upgrade. First, the computer my kids were using was one that I built back in 2010. It’s served them well. But it was really starting to show its age. Plus, with all the home-learning thanks to Covid, the time for a good hand-me-down was nigh! The second push towards upgrading was due to my new job providing me with a bit more disposable income. So, with all things considered, why not?

Once I decided I was going to build a new system, I was posed with a major decision.  Do I finally break away from my love-affair with Intel and embrace AMD? I toyed around with the idea last time. And since then, AMD’s offerings have only improved. In fact, I daresay their new Ryzen 9 chips may even be the best option on the market right now for gamers – beating out Intel’s 10th generation CPUs. After much price comparison and plenty of research, I did originally decide to go the AMD route for this build… Except, there was just one problem – I couldn’t find the chip I wanted!

I decided early on that if I were to go with an AMD chip, I would settle for nothing less than the best. In this case, that would have meant a Ryzen 9 5950X. But once I started shopping, they were sold out everywhere I looked. Sure, I could have paid triple the MSRP and bought one from a scalper. But in my eyes, that just wasn’t a reasonable option. After several weeks of waiting to see if one would appear on the market, I threw in the towel and decided to stick with my old standby, Intel.

Historically speaking, Intel chips usually tend to lead the pack when it comes to gaming. It wasn’t until recently that AMD really started to make headway in the benchmarks. Even then, their leads tend to be very situational. So, having to fall back on Intel was not a concession in anyway whatsoever.

For this build, I decided to go with a 10th gen “Comet Lake” CPU: an i7-10700k. This is an eight-core processor that runs at 3.6Ghz (5.1 turbo) out of the box. I toyed around with the idea of getting one of the new 10-core chips. But performance increases simply didn’t equate to the higher cost. Plus, this chip is much easier to overclock than the i9-10900k.

When it comes to overclocking, I don’t push my CPUs very hard. Aside from enabling turbo on all cores, I don’t really try to squeeze out higher base speeds. Because of this, I never have the need to worry about things like liquid cooling. Call me old school, but I’m still a fan of standard CPU cooling (pun intended). As usual, I went with a quality cooler from Noctua. I simply love their fans. they run quiet and are extremely efficient coolers. 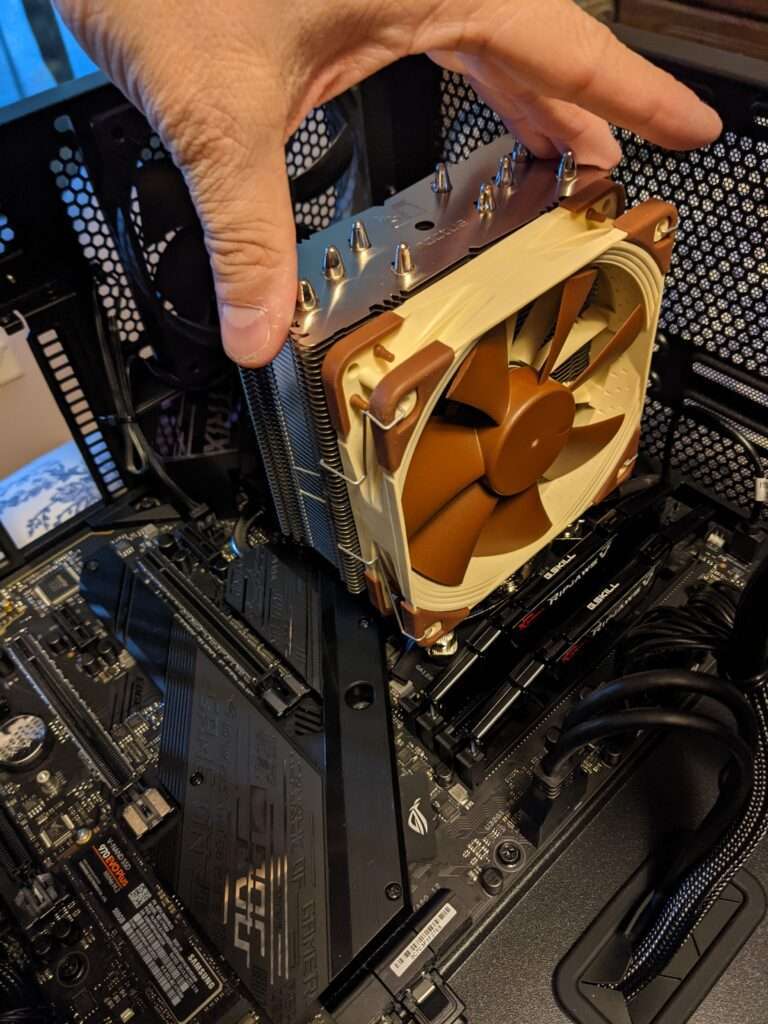 For my mainboard, I went with an ASUS ROG Strix Z490-E. For the longest time I was a Gigabyte guy. But my last system featured a mid-grade ASUS board and it really impressed me. This time around, I decided to stick with the brand and go all out with a high-end offering. This board features all of the slots and ports that I need. Plus, it offers some nice upgrades in term of heat management and full RGB support (more on this later).

So far, I’ve talked about my CPU and mainboard. Let’s take a look at memory. This time around, I spent a little bit more and bought some premium memory. For my last build, I tried to cut corners and go with some sticks of budget RAM. The sticks I purchased did the job. But I wasn’t really able to milk any extra performance out of them. This time, I allowed myself to get something a little more performance-oriented. In the end, I decided on a pair of G.Skill Ripjaws V 3200’s. These chips come rated for XMP II – ensuring prime performance right out of the box. 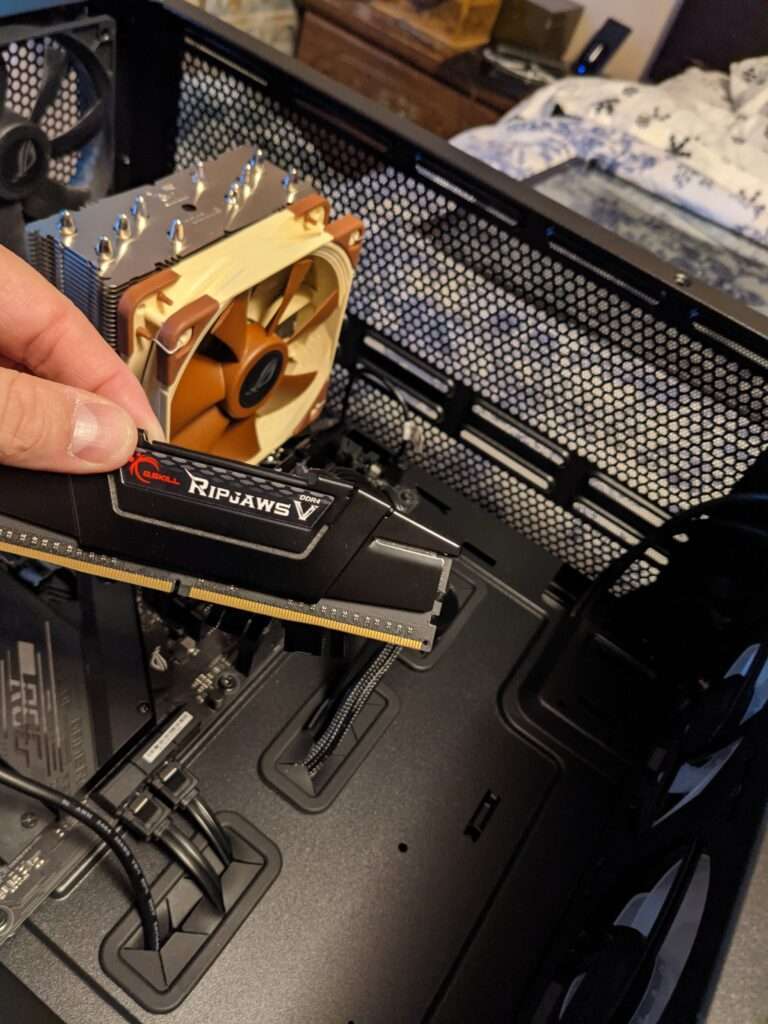 For storage, I did opt for a second M.2 SSD. This time around I went with a 500GB Samsung 970 EVO Plus for my main drive. I kept my existing Samsung 970 to be used as my “gaming” SSD. I also still have my two old Firecudas for mass storage.

For sound, I retained my Sound Blaster AE-5 Plus. The Z490-E features pretty decent on-board sound. But it just doesn’t compare to the quality offered by the AE-5 Plus. Unless something drastic happens with on-board audio in the future, I really don’t see myself letting go a dedicated soundcard ever again.

Now, on to the the most important element in a gaming PC, the GPU. As you may know, about a year and a half ago, I switch the card in my rig from Nvidia to an AMD Radeon. I was quite impressed with some of the features of the Radeon (especially the texture sharpening). But In the end, I decided to switch back to Nivida to take advantage of the latest technology. That’s right, I’ve finally taken the leap into the world of RTX… The card I selected for my new system is a 3070. To be more specific, I purchased an EVGA Geforce RTX 3070 XC3 Ultra. – This card is leaps and bounds better than anything I’ve ever owned before. Typically, for financial reasons I tend to go with Nvidia’s “60-series” cards. So going mainstream and making the step up to a “70-series” is a pretty big upgrade for me. Plus, the XC3 Ultra is a pretty impressive card in itself with 8GBs of RAM and stellar cooling.

Finding a decent graphics card in today’s market was no small feat. As you may know, there’s currently a worldwide shortage on graphics cards thanks to both Covid-19 and the digital currency craze. Graphics cards are able to perform “coin farming” calculations with extreme proficiency. So, bitcoin miners all over the world snatch them up as soon as they hit the market with the intention of installing them in special rigs hoping to “farm” bitcoins and other digital currency. I was EXTREMELY fortunate to find a PC OEM that had cards in stock.

To power everything I decided to go with 750-watt Super Flower Leadex III PSU. Super Flower is a company that’s fairly new on my radar but their reputation is nothing short of stellar and this box will supply more than enough power for my needs. 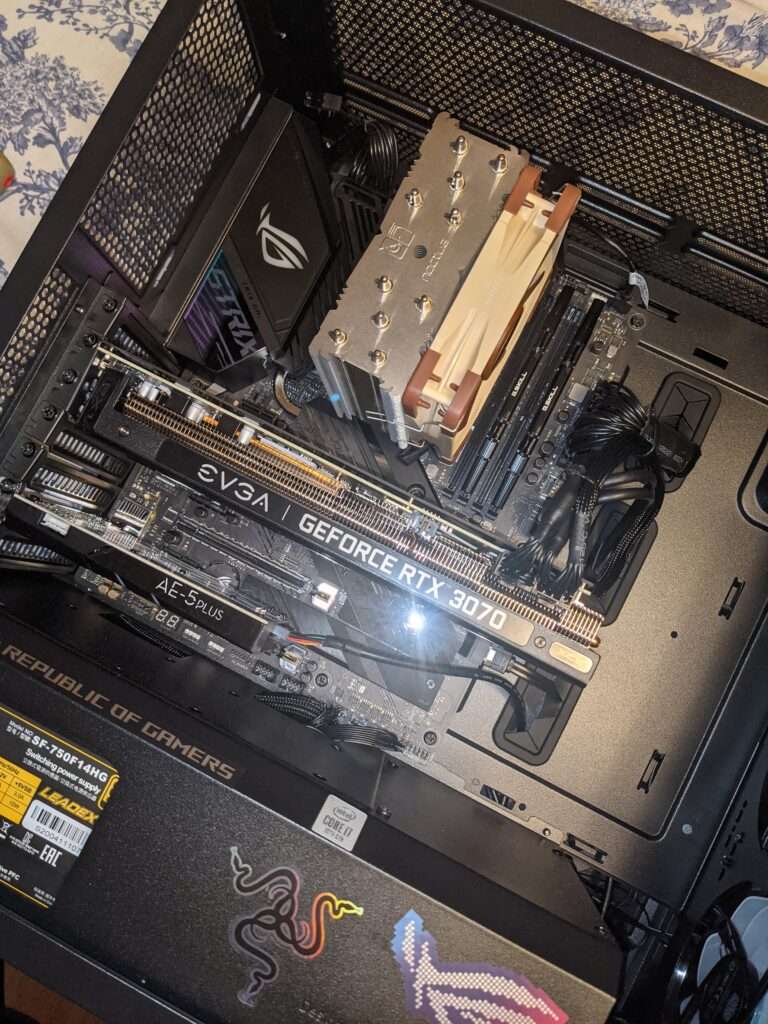 Finally, to hold it all together, I went with a Cooler Master Masterbox TD500 Mesh case. This case features plenty of room and with three-fans in the front, it is designed for maximum airflow and cooling. Plus, the tempered glass window makes it perfect to show the internals of the system.

Which leads me to my final note… After years of trying to resist, I’ve finally succumbed to the RGB lighting craze. My previous system featured some very minor lighting effects. But this new mainboard offers full ARGB lighting support. The board itself plays host to ASUS’s Aura lighting system, and my Cooler Master case is fully compatible. Plus, both my sound and video card feature their own adjustable lights. Also, it’s no secret that for some time, I’ve been a fan of Razer peripherals (which feature Chroma lighting). So I guess all those little piecemeal lights finally worked their magic on me and lead me to the darkside. Or should I say, the “neon side”.

Anyways, that’s the new hermit rig in a nutshell. I look forward to many hours of PC gaming with this new rig! 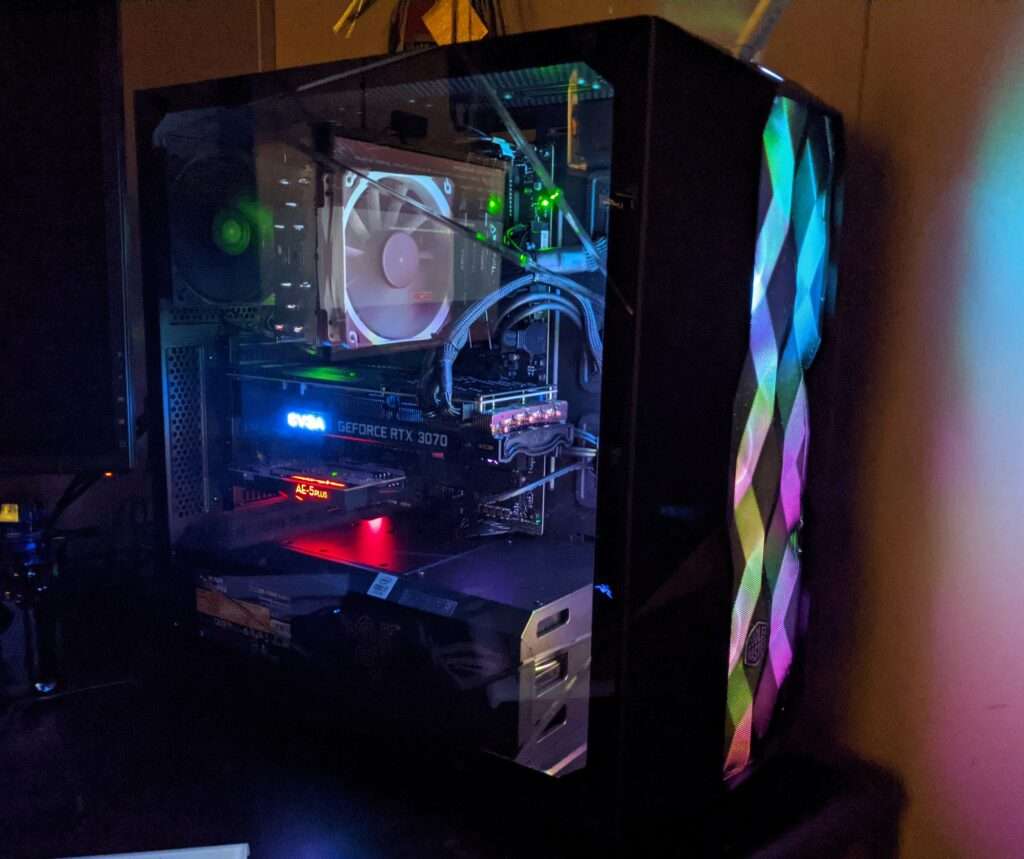