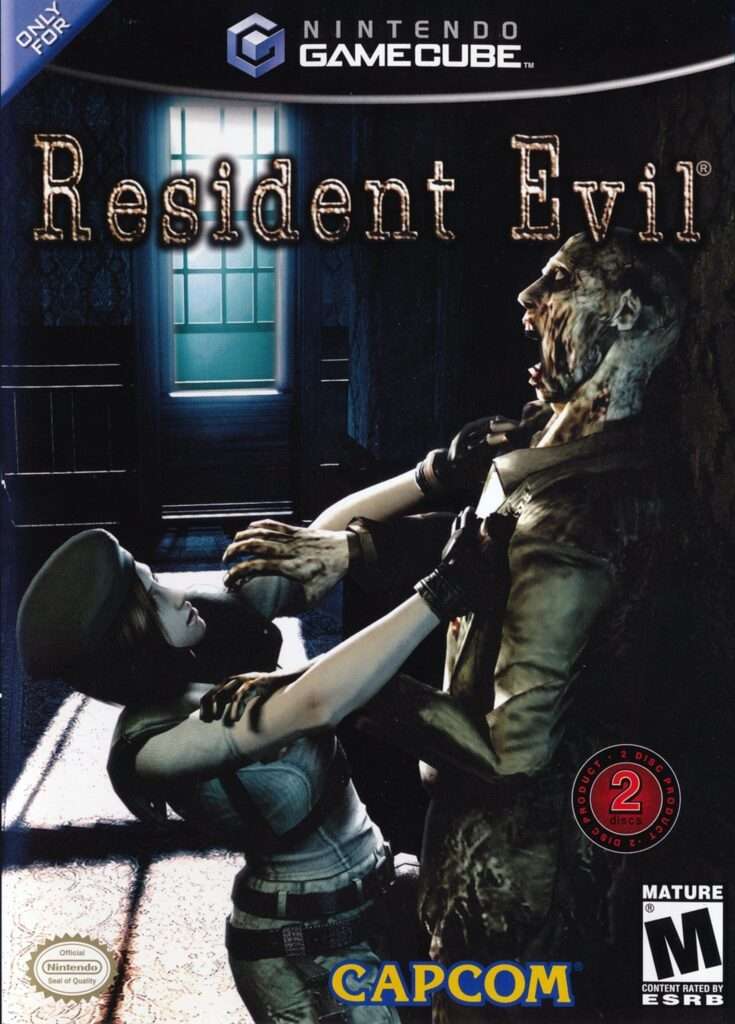 Wow! It’s been over a month since my last game review and what a month it’s been! Aside from the normal craziness that comes with the Christmas season, here in the US we’ve also been dealing with the aftermath of the presidential election as well as a rise in pandemic cases. As a result, with the exception of going to work, I’ve been trying my best to stay cloistered at home as much as possible. I suppose if you have to spend the dead of winter hiding from a virus what better game series is there to turn to besides Resident Evil? With this in mind, I’ve spent the last month playing through the Resident Evil remake that originally debuted on the Nintendo GameCube.

It’s this remake of the original game that I’ll be focusing on today. Being a remake, this game is very similar to the original Resident Evil. To start with, the main storyline is the same and a large portion of the game mechanics will also be familiar to fans of the series. The most obvious difference between the two games come in the form of graphical updates. The 2002 version of Resident Evil is drastically superior in terms of visuals. These improvements are made even better with the HD Remaster that’s available on modern consoles. – That’s right! Even though the Resident Evil remake was a GameCube exclusive for many years, it has since been updated again and made available for modern systems. In fact, for this review, I decided to sink my teeth into the HD Remaster for the PS4. Before I get into the review itself, allow me to take a moment to outline some of the differences between the two versions of this game.

For its time, the original GameCube version of Resident Evil was the version to play. It took everything that was great about the original PS1 game and made it even better. These days, that’s not the case. There’s also a modern HD Remaster that includes every enhancement from the 2002 version, but combines it improved textures, widescreen support, and a more modern control scheme. It’s an improvement in nearly every regard. In fact, it’s so much better that I find it hard to come up with any reason to recommend the original GameCube release over the more modern HD version. If you’re a retro gamer who wants to enjoy some old school Resident Evil, there’s always the PS1 version. But if you want to experience the remake, I do suggest the modern HD Remaster. 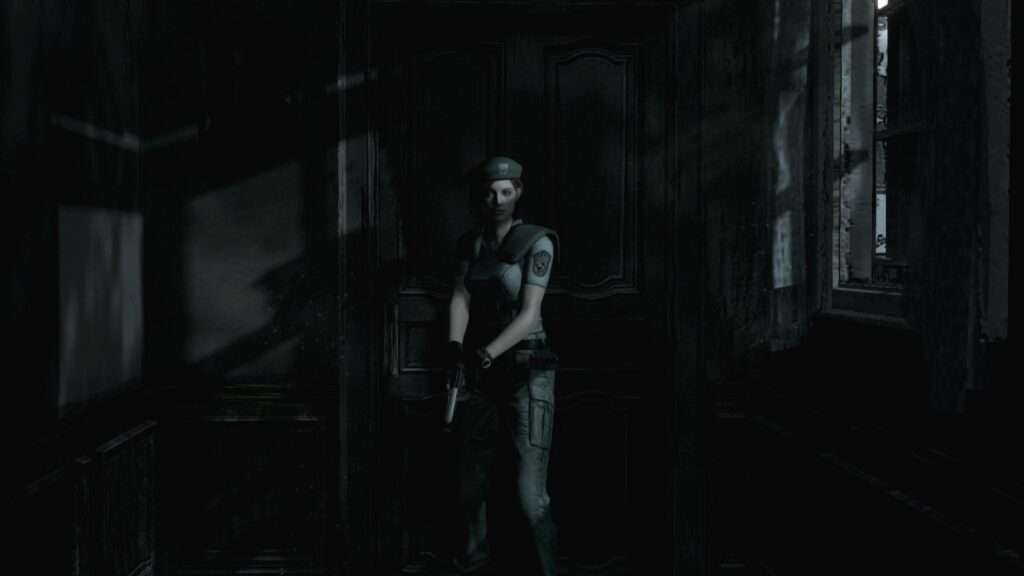 The storyline for this game is essentially identical to that found in the PS1 version of Resident Evil. The game focuses on the characters of Jill Valentine and Chris Redfield. Two agents in a special police division called STARS Alpha Team.  The game begins with the Alpha Team being dispatched on a search and rescue mission. A previous squad of STARS members (Bravo Team) was tasked with investigating a series of unusual murders just outside Raccoon City. When Bravo Team did not return, Alpha Team was sent to assess the situation. The opening cutscene shows Alpha Team locating the wreckage of Bravo’s helicopter. While investigating the crash, the STARS are attacked by a pack of monster-like dogs. Unable to combat them effectively, the Alpha Team runs to a nearby mansion for shelter. During the chaos, the team gets split up. The goal of the game is locate your missing teammates and explore the mansion for clues regarding the whereabouts of the STARS Bravo Team members. As the player, you can choose to control either Jill Valentine or Chris Redfield. Each character has their own set pros and cons. The flow of the story will change slightly depending on which you choose. Regardless of your selection, the overall plot is largely the same.

As mentioned earlier, the majority of the game’s plot is identical to the original Resident Evil. However, there are a few small exceptions. For starters, the remake includes some new plot elements that were cut out of the original game. Also, this game includes a revised script that’s very much an improvement over the original.

But the changes don’t stop there. The remake also features some changes to the gameplay itself. For example, in this version of Resident Evil, zombies that are killed will respawn after a certain period of time. These resurrected zombies are faster and stronger than they were in their original form. To prevent zombies from respawning in this way, players must either decapitate them the first time around, or burn the zombie’s body once it has been defeated. Also, several of the game’s puzzles have been modified and changed. This allows fans of the original release to experience some new challenges when playing through this new version. 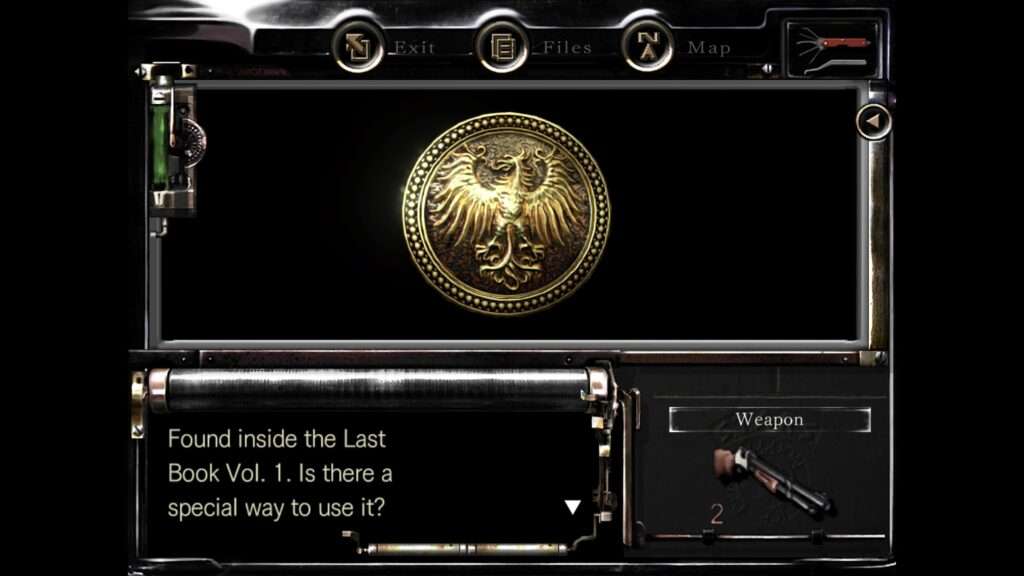 Being a survival horror, one of the things this game does right is build tension. I always praised the original Resident Evil for its ability to make players apprehensive about what is around every corner. This game does the same thing, but only better. The improved graphics and lighting add a whole new level of immersion to the Resident Evil experience. It’s really something to behold, especially when playing the HD Remaster.

I played this game when it first came out on the GameCube and loved every second of it. Playing HD Remaster now is even more enjoyable. Most of the new features can be disabled for players that want the original experience. But the widescreen support and the revamped control scheme really add something to the game.

For new players who want to see what all the buzz is about, there’s no better starting point than this game. It’s the original scenario with the benefit of modern bells and whistles. When it comes to remakes, there’s usually some aspect that leaves me still feeling a bit nostalgic for the original. That’s not the case with this game. The Resident Evil remake is almost perfect. It’s truly a must-play title. 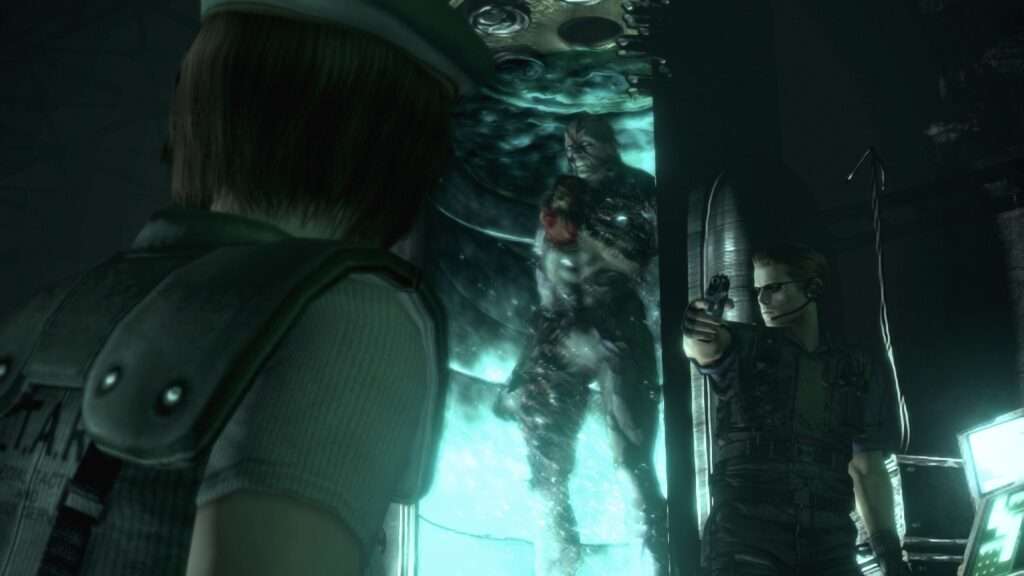 Difficulty: Variable –  This game features a number of difficulty settings; a Very Easy mode for players who want to experience the story with little challenge, an Easy mode that puts the game on par with the original title, and a Normal mode which is a tad more challenging that the original game. Upon completing the game at least once, a Hard mode is also unlocked for players that want a serious challenge. Over the years I’ve played this game in every difficulty level. Generally speaking, I recommend Easy for first-time players. Once you’ve been through it once, Normal mode shouldn’t feel just about right. For the sake of this review, I completed the game in Easy mode using Jill.

Story: The story line behind Resident Evil is surprisingly complex. It’s starts out simple, but slowly builds as layer upon layer is uncovered by the player as they proceed through the game. The game has a very B-Movie feel to it, which I love. The new plot elements introduced in the remake only add more depth the lore and help it to tie-in even better with the rest of the series.

Originality: Despite being a remake, there’s enough new elements introduced to the game to prevent it from feeling like a rehash.

Soundtrack: This game features a very minimalist soundtrack, which works very well. Music is used to queue up tension, or in some cases even relief. (Anyone exploring the mansion who opens an unknown door – only to hear the “Storage Room Music” knows exactly what I mean.) Sadly, the game suffers from some pretty terrible voice acting.

Fun: Resident Evil is the perfect game to play late at night with all the lights off. My current work schedules affords me three days off a week and I sleep during the day. So I had plenty of late nights with this title and enjoyed every minute of it. Upon completion, I was really tempted to start over and play again with a different character. The only reason I didn’t was to prevent any further delay in posting this review.

Graphics: This is where the remake really shines. The GameCube version was worlds better than any other Resident Evil to date, even Code Veronica. Naturally, the HD Remaster is an even better improvement. The lighting effects in this game are extremely well done and really give this game its atmosphere.

Playcontrol: The original release on the GameCube stuck with the classic “tank-style” control scheme, albeit with a few improvements. However, the HD Remaster finally adds the ability to propel the character with the analog stick. And trust me, it’s a welcome change! Still, the playcontrol does get wonky from time to time thanks to the fixed camera angles. Occasionally, when the camera shifts between perspectives, it’s easy to get confused on which direction to press the controller. But with a little time, this is easy enough to master.

Value: The best way to get your hands on this game today is by purchasing the Resident Evil Origins collection. This bundle features both RE: HD Remaster and Resident Evil Zero HD Remaster together. This typically sells for about $20-30. The standalone version of the HD Remaster sells for just under $20 by itself. Players who want to get their hands on a physical copy of the GameCube version can expect to shell out big money. The physical GC version typically sells for $75 or more, depending on condition.

Overall score (1-100): 95 – This game is an improvement on the original RE in almost every way imaginable. The HD Remaster is definitely the way to go for most players as it takes everything good about the original GameCube version and makes it even better. Players who want to experience the origin of the Resident Evil saga need to look no further than this right here.