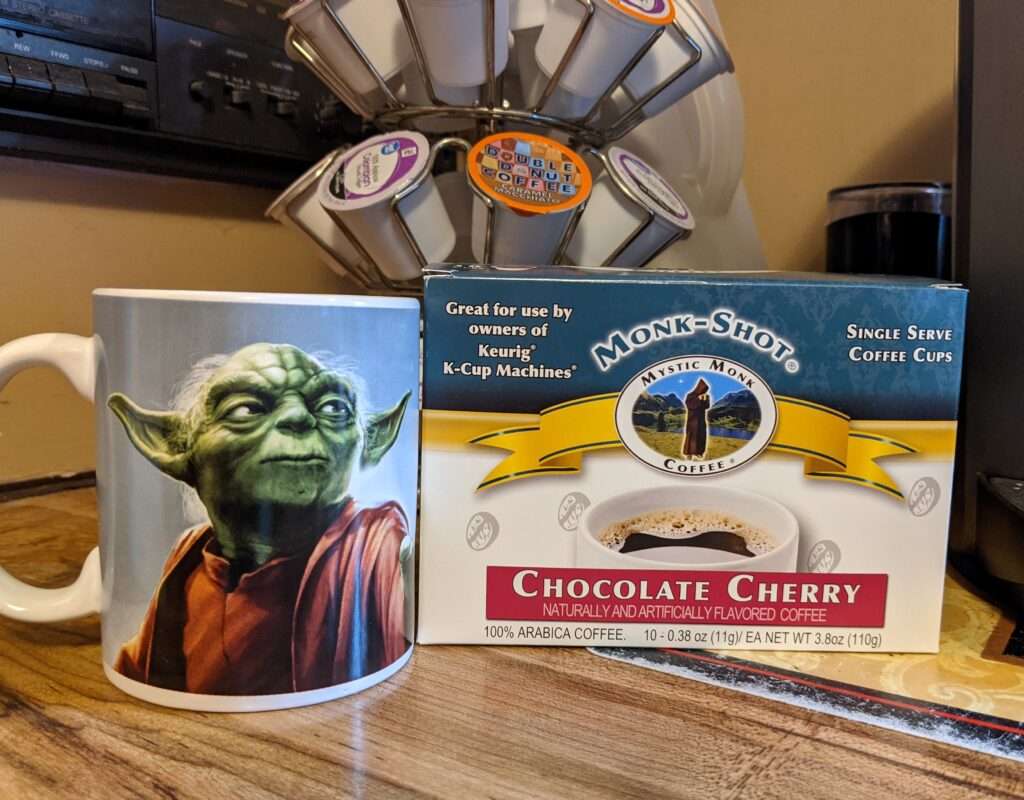 It seems like every coffee company has a special brew for each season. Our friends at Mystic Monk are no exception. With the month of February coming to a close, I wanted to take a look at Mystic Monk’s February release, the Valentine’s Day themed Chocolate Cherry. A few months ago I reviewed another Chocolate Cherry coffee by Cella’s, and I found it to be absolutely delightful. With that experience fresh in my mind, I was excited to see how Mystic Monk’s coffee of the same name compared.

I received this as part of my coffee-of-the-month subscription and the first thing I noticed was that I could smell it before I even opened the box it was shipped in. This coffee is PUNGENT. It’s very floral, almost perfume like. Yes, the main odor is cherry. But it’s more like a cherry blossom than a cherry fruit. This aroma was amplified even further when brewing the coffee. In fact, it’s so powerful that it might be too strong of a scent for some drinkers to stomach. I’ll be honest, it’s a little off-putting at first. But after a while, I was able to get past it.

Smelling this coffee tells you everything you need to know about it’s taste. The flavor certainly takes center stage with this brew. The coffee itself is very earthy, almost dank smelling. The chocolate is there, but it’s very much in the background. It’s the cherry that is really front and center. And like I said, it’s very floral. It’s not at all what I was expecting. It’s just… odd.

This is going to sound weird, but in a strange way the flavor of this coffee almost reminds me of a cigar. If you’ve ever puffed on an old fashioned leaf-rolled stogie or walked into a humidor… that’s what this coffee tastes like. I have no idea why, but seriously, that’s the vibe I got. If this coffee were marketed in such a way, it might fare a bit better. But people expecting “cherry chocolate” are likely to be disappointed.

Personally, I find the flavor curious and interesting. But, it’s just too intense. And, if I’m being honest, not particularly good.

Would buy again?:  No. This is a funky one. It’s not completely undrinkable. But, I could go the rest of my life without another cup. The name is misleading. Most buyers will probably be disappointed with the flavor of this coffee.