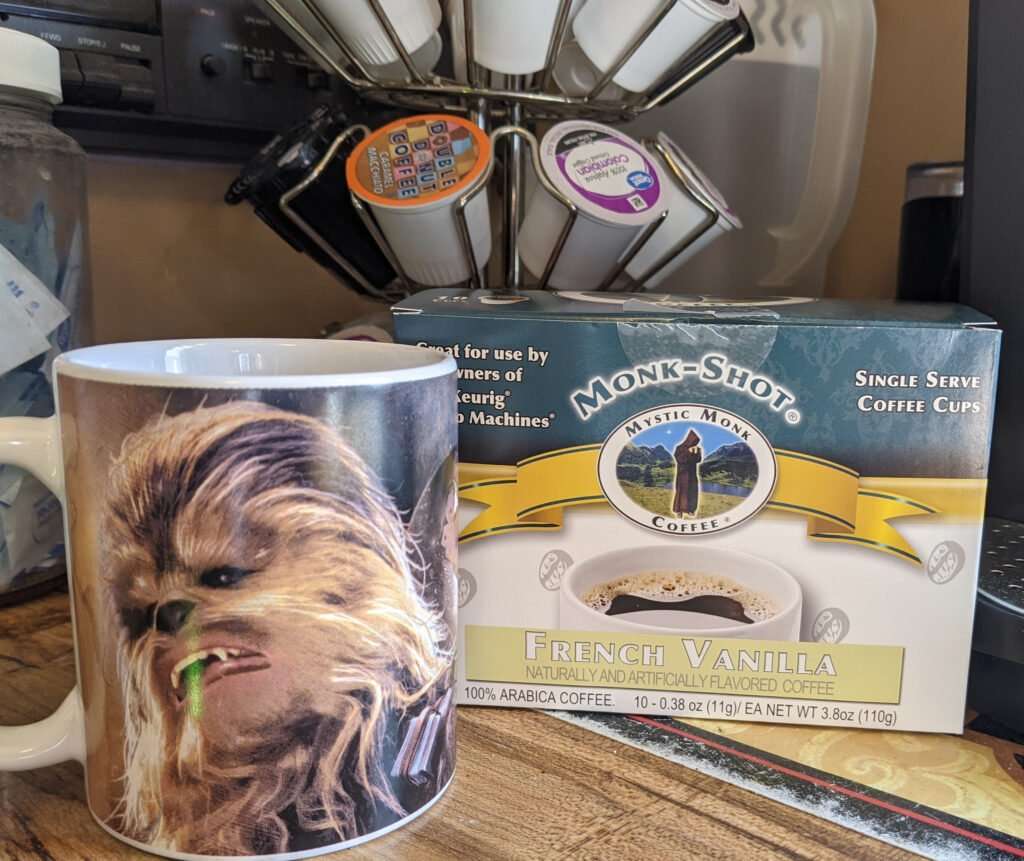 Over the years I’ve talked about a handful of coffees made by the Mystic Monks (a real monastery of monks out in Wyoming). But for Christmas, my wife gifted me with a Mystic Monk coffee-of-the-month subscription. This means my Mystic Monk reviews should start coming with a little more frequency. My first delivery came in December with a shipment of Jingle Bell Java. And if you read that review, you’ll know that I was extremely delighted with it. For the month of January, the monks got a bit more generic and sent me a box of French Vanilla flavored coffee.

Now, when it comes to flavored coffee, French Vanilla is about as standard as it gets. Even people who don’t usually drink flavored coffee have more than likely tasted a cup of vanilla flavored joe at some point. In fact, the flavor is so universal and boring that I don’t think I’ve ever bothered to review one before. That changes today.

You might think that it’s pretty hard to mess up something as simple as vanilla-flavored coffee. But trust me, you can. And most of the time when it goes wrong it’s due to cheap artificial flavoring. Many coffee companies fall into the same trap of using budget over-sweet flavoring syrup that tastes fake. To make matters worse, French Vanilla is actually a pretty easy flavor to screw up. People tend to think of vanilla as a very simple flavor. But in fact, vanilla is quite complex. Nailing all of the subtlety of quality vanilla is not an easy task. So how do our favorite monks do? Let’s find out…

To start with, the coffee itself is a medium roast which seems to be the standard for most flavored coffee. The Mystic Monks use quality coffee beans and that’s immediately apparent during the brew. The aroma of the coffee is fresh and sweet – the vanilla is front-and-center. The same can be said for the taste. The vanilla flavoring is very prominent in this blend. Thankfully, on its own it doesn’t taste like a cheap bottom-tier syrup. But, the flavor increases in intensity as you add more sugar/sweetener to your cup. In fact, if prepare this cup of coffee as I normally do, the french vanilla flavor becomes overpowering.

Through experimentation, I learned that when it comes to this particular coffee, it simply tastes better with less added to the cup. With this in mind, I don’t put as much of my sweetened creamer in as I normally would and the end result is a pretty enjoyable cup of coffee with a rich, but subtle flavor. But if I add too much though, the whole thing falls apart and the vanilla takes on a fake, artificial taste.

With all this in mind, it really seems like preparation is the key to this one. If you prefer your coffee black, or with very little added, the vanilla flavor really shines here. But if you’re one of those “white coffee” drinkers, the taste might end up being a little overboard. Still, it’s a pretty quality coffee overall. But if I’m being honest, I’ve had better french vanilla coffees elsewhere.

Would buy again?: Maybe. If prepared correctly, this is a pretty solid cup of coffee that should please almost anybody. However, there’s nothing really unique that stands out and makes this coffee feel particularly special.