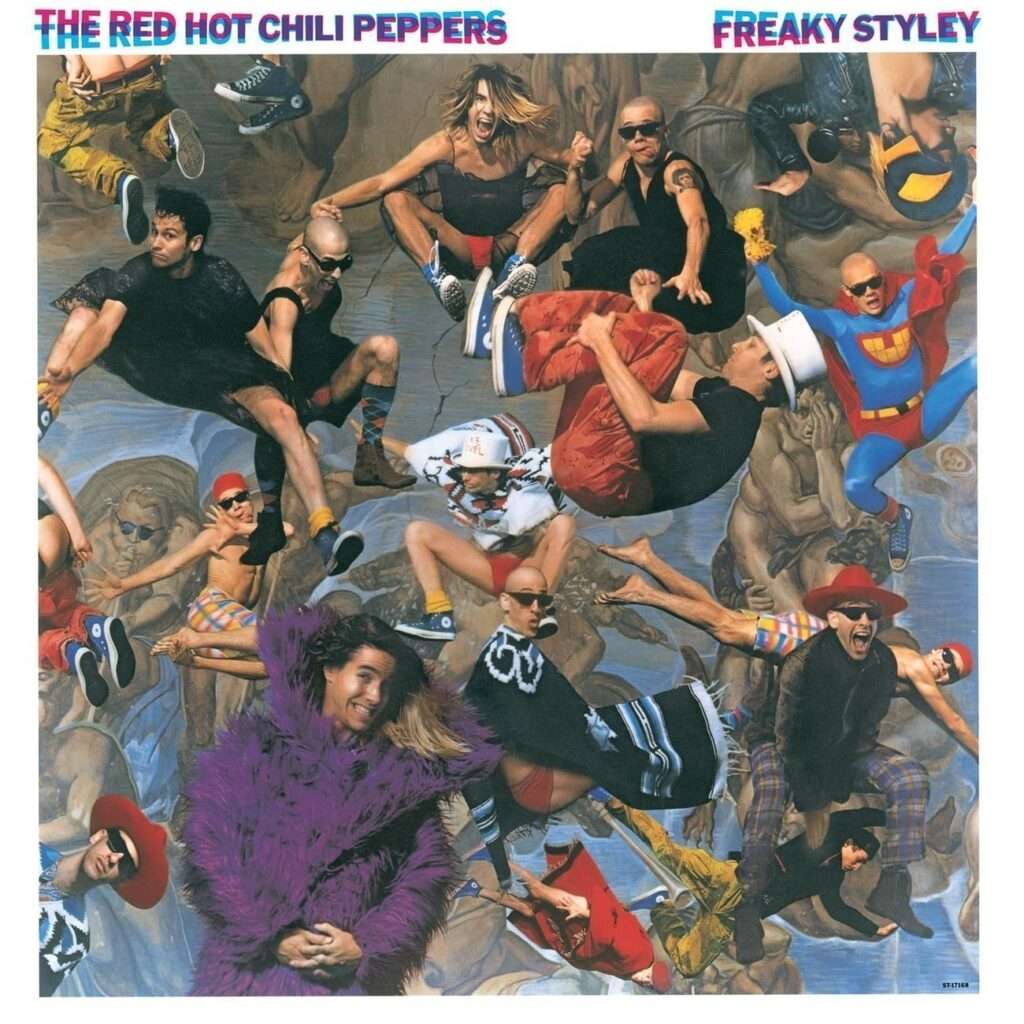 The last time I wrote one of these Record Shop articles, I talked about the Red Hot Chili Peppers’ debut album. In this post, I’ve decided to stick with the trend and take a look at their sophomore release, Freaky Styley.

If you’re familiar with the RHCP, you’ll know that their early music sounds nothing like the songs that get played on the air today. In fact, their first album is a mess of raw, unpolished energy. But somewhere amidst all the chaos, the observant listener is able to detect a band that is laying the foundation for something great. This record does a fantastic job of stabilizing that foundation while still keeping the bizarre energy of the band’s earliest release.

If you read my review for RHCP’s first album, you’ll know that many of their earliest songs have some pretty song funk roots. Well, this album takes the band’s love for funk and doubles down on it. In fact, the record itself was produced by none other than the funk pioneer George Clinton. Clinton’s influence on the band is immediately apparent when listening to this album. For starters, this record features much better production quality than their debut release. In addition, Clinton’s experience with classic 70’s funk really brings this aspect of the Chili Peppers’ sound to the forefront. To help explain what I mean by that, let’s take a track-by-track look at Freaky Styley.

1: Jungle Man–  The album opens with “Jungle Man”. This track is a drum-heavy funk tune featuring a rap-like cadence by vocalist Anthony Kiedis. This song was also the first single off the record. As odd as this track is, it’s pretty groovy and actually makes for an excellent album opener.

2: Hollywood (Africa) – This song is actually a reworked cover of “Africa” by The Meters. RHCP takes some liberties with the song by changing some of the words and turning it into a homage to Hollywood, CA. This tune is an excellent example of George Clinton’s influence on the group. The production for this song is extremely tight – a far cry from what is found on the band’s first release. It also features brass and other instruments that were a bit unusual for RHCP at the time. This song was the second single from the album.

3: American Ghost Dance – Like “Jungle Man”, we have another funky rap song. This track is upbeat and groovy, but it’s not quite as memorable as the somewhat similar sounding “Jungle Man”.

4: If You Want Me to Stay – Another cover. This time it’s a song by Sly & the Family Stone. Being a fan of the original version, I have to say the Chili Peppers do a fine job with this cover. In fact, this is probably one of my favorite tracks from the album.

5: Nevermind – The song opens with a spoken word rap by Kiedis that’s followed by a high-energy jam that very reminiscent of something that might be found on the band’s first album. Honestly, there’s nothing really worth mentioning here. It’s not terrible, but it’s also not particularly good.

6: Freaky Styley – This is a weird one. It’s a droning, motor-driven tune that features buried, repetitive vocals. I find it odd that this is the title track for the album, because it’s largely a throw-away track in my opinion. Pretty sure the boys were high when this one was laid down.

7: Blackeyed Blonde – A speedy rap tune. Again, it sounds like something that might have been on the band’s first album. Not a very memorable track.

8: The Brothers Cup – Now this is more like it. “The Brothers Cup” is full on funk. A groovy bass line, funky guitar, and a great horn section. This is a catchy, fun track.

10: Lovin’ and Touchin’ – This is a bit of a segue way. It’s a short chant over a repetitive bass lick. On its own there’s not much to see here. But it does a good job of helping the listener come down after the high energy of the last track.

11: Catholic School Girls Rule – Another punk song, but this time it’s one with a more moderate tempo. The chorus riff to this song is actually a pretty blatant rip off of an old Black Flag tune, but considering the nature of the punk scene in those days, this is pretty forgivable. I like this one.

12: Sex Rap – The title tells you everything you need to know. The composition of this song is tight and skillful. But as a whole, the song just isn’t particularly good.

13: Thirty Dirty Birds – A pointless spoken word piece. There’s not really anything of value in this track. Yet, I’ve had this rhyme memorized since I was a teenager…

14: Yertle the Turtle – The album ends with a funky jam called “Yertle the Turtle”. If I’m being honest, this song is also pretty silly and pointless. But it is a bit catchy at times. Still, it’s probably not best closing track.

As was the case with RHCP’s first album, this one was pretty tricky to do a track-by-track analysis on. The record started off as pretty solid funk album. Then it veered off into punk rock territory for a couple of songs, before finally ending up back up where it started.  George Clinton’s influence on the band is very apparent on this album. His skills as a producer gave the Chili Peppers a level of polish that was much needed. This is an album that’s really best enjoyed as a whole. Just put it on, and go about your business. Just like the band’s first album, it’s probably not accessible to most casual listeners. Someone hearing this album would likely never guess that the band would go on to be one of the most popular names in rock music. Still, when listened to back-to-back with their first album, the band’s evolution here is staggering.

When listening to albums, I always suggest enjoying them on a nice Hi-Fi stereo system, or on a portable device with a good pair of headphones. When listening to classic records like this, I prefer the original release to many of the “remastered” editions. Often times, remasters are overly loud and actually contain a lower level of quality than the original album. The 2003 remaster of this record suffers from this problem. However, it’s worth noting that the remaster also features a few bonus tracks that might be interesting to hardcore Chili Peppers fans.

When listening to a record, always listen from start to finish. Unlike pop albums, many good rock records are sequenced in a certain order. Some songs tend to be more enjoyable when following the song preceding them. That’s not particularly true with this album, but that’s still my general practice. To me, this album is best enjoyed while engaging in some other activity. Put the record on while you’re driving, or doing house work. Let it play in the background. Listen it to a few times. Some records need to grow on you. This is a fine example of one of those records. If it doesn’t strike a chord with you at first, give it a few more listens, your opinion may change. No matter what you think about this particular album, it’s certainly not boring.