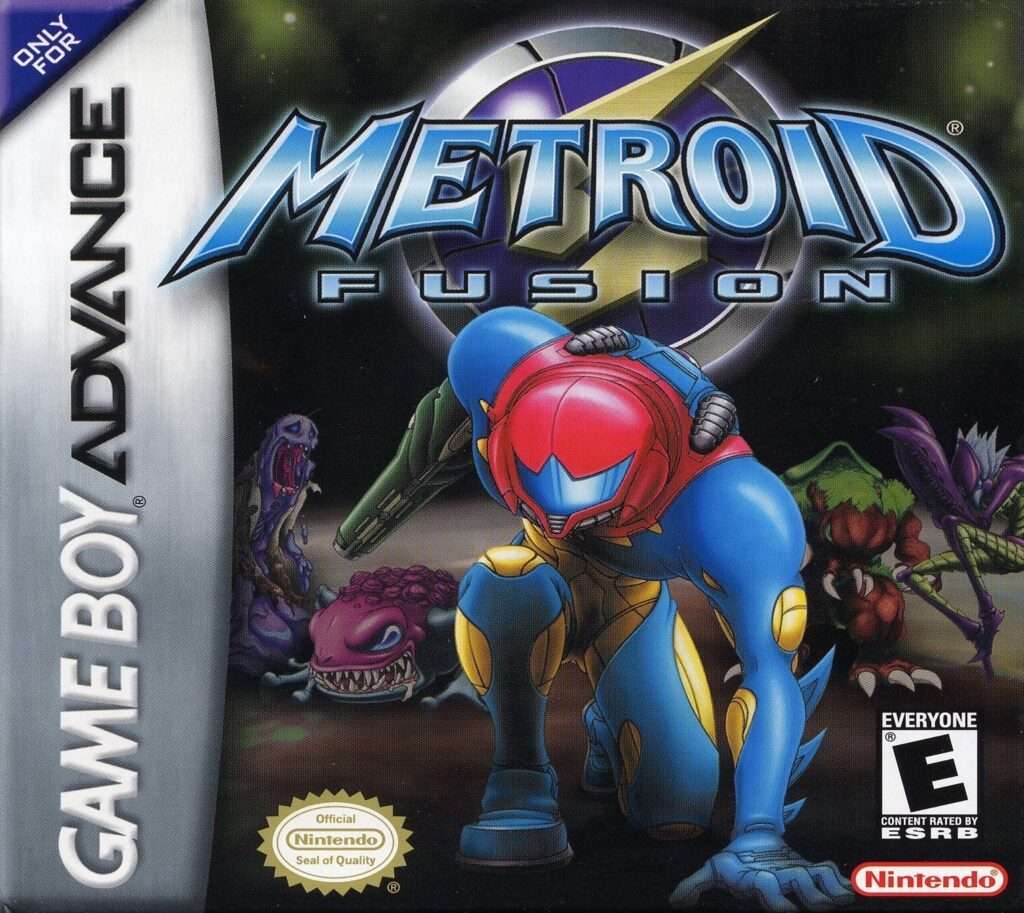 No, you didn’t read the title wrong. I’m actually reviewing Metroid Fusion! How long has it been since I last discussed a game in the Metroid series? Can you believe it has been eight years since I posted my review for the legendary Super Metroid?! That’s certainly a long time, but it’s not that I’m lazy. As you know, I like to tackle my backlog by generation and it has taken that long for me to grind my way up from the Super Nintendo era to the days of the Game Boy Advance. Oddly enough, eight years is also the actual span of time between the release of this game and Super Metroid. (Metroid Fusion was released in late 2002, eight years after 1994’s Super Metroid.) With that in mind, I suppose my delay is somewhat forgivable. And yes, I know that technically, Metroid Prime was released at the same time as Metroid Fusion. But considering this game was originally teased as “Metroid IV“, I consider this the next official release in the series.

With that much time between titles, you might expect some pretty big gameplay changes coming from this title. Surprisingly, that isn’t the case. Metroid Fusion follows the classic Metroid formula pretty strictly and it pays off in a big way. What we have here is a classic side-scrolling action game that looks and feels exactly like what fans of the series have come to expect.

The story for Metroid Fusion takes place some time after the events of Super Metroid. Prior to the beginning of this game, Samus was sent to planet SR388 as part of a research team. While there, the team encounters a new parasitic lifeform called “X”. The parasite attacks Samus and infects her organic power suit. In an emergency operation, a large portion of the suit is removed and Samus is treated with a vaccine for X that was created using cells harvested from an infant metroid. Along with healing her, this treatment also enables Samus to absorb attacks from the X parasite. But there is a trade-off… With metroid DNA in her body, she has also temporarily inherited their weaknesses. To make matters worse, the research lab where Samus was treated has been overrun by a mutated form of the X parasite. The parasite is able to impersonate any previously infected host. In this case, that means Samus! Samus is tasked with hunting down the X parasites that have taken over the lab one by one. By doing so, she will be able to reabsorb her missing skills and defenses. This will hopefully make her powerful enough to face down her own parasitic clone… unless it finds her first. 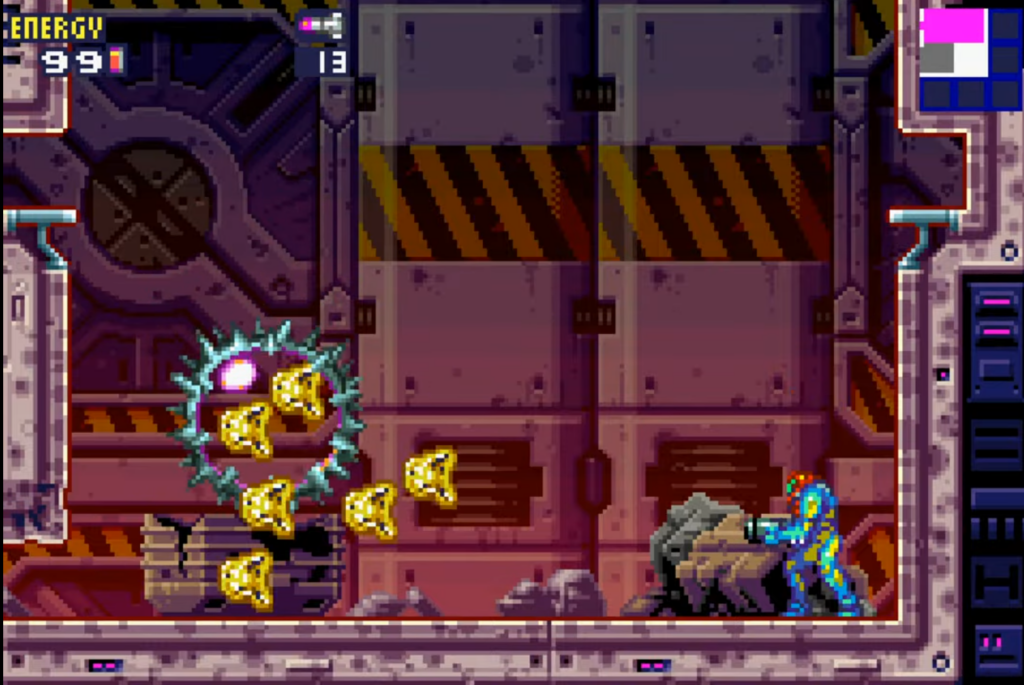 As I mentioned above, this game is very similar to earlier entries in the series. The basic premise is the same; players control Samus as she navigates her way through a labyrinth-like space station. At first, only a small portion of the map is accessible. But as players locate items and upgrades, more and more areas are unlocked for players to explore. The biggest difference between this and earlier entries in the series is the depth of the story. At various points in the game, new plot elements unfold in the form of cutscenes and on-screen text. This is certainly a welcome addition. But in some ways it also manages to blunt the sharp mysterious edge that the series has always managed to maintain. For example, when unlocking a new area, this game provides some pretty big hints as to the player’s next objective. That’s perfectly fine. It’s just a little more hand-holding than we’ve seen in the series so far. But, that’s not a complaint, just an observation.

Aside from these text-based prompts. The game still doesn’t let players forget what’s going on. Often times when moving into a new area, monsters will briefly appear as X parasites before mutating into whatever creatures occupy the room. Also, players will occasionally encounter Samus’ clone; SA-X. These encounters can be tense because SA-X is essentially a full-powered version of Samus. That’s why it’s imperative to seek out every upgrade available so that you’ll be fully ready to tackle SA-X when the time is right.

Running into SA-X early on is no joke. This monster is able to kill you very easily. In fact, once you’ve had your first taste of her, merely catching a glimpse will be enough to send you running. This plays into another aspect of the Metroid Fusion that’s often discussed, its survival horror element. Now, I want to be clear. Metroid Fusion is not a survival horror game. But it does a fantastic job of creating tension and anxiety for the player. This is true not only through the encounters with SA-X, but also with other boss fights and even just through random enemy encounters. For example, when defeating an enemy, players will want to be quick to absorb any X parasites that flee the defeated host. If not, there’s a good chance they may mutate into something even stronger. All of this can make quite a challenge for first-time players. 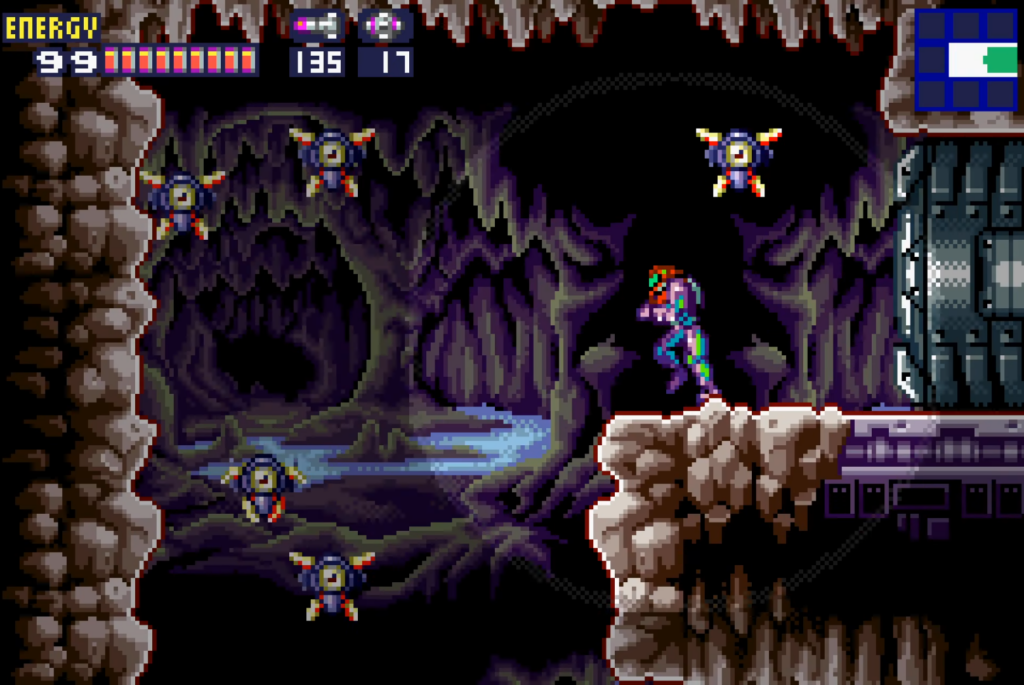 So far, I’ve had nothing but praise for the title. So it is important not to overlook one of the few criticisms that this game tends to garner, its on-rails design. Yes. Compared to other entries in the series, Metroid Fusion does feel a bit more linear. In these sort of games, certain areas are always inaccessible to some extent for a time. But this game does tend to make that the case more often than not. Still, when looked at through the lens of good storytelling, I personally find this to be more than acceptable. This game is trying to do something no other game in the series has done thus far. And if that means it has to be a little less open, I’ll accept that as a fair trade-off.

From a technical standpoint, Fusion is an absolute masterpiece for its time. The visuals are colorful and gorgeous. The sound quality is also nothing short of fantastic. This is one title that really showcases everything the Game Boy Advance is capable of. But like so many games that were released during the lifespan of the original GBA, most players were unable to fully appreciate the visuals in all of their glory. The lack of backlighting on the original GBA makes Metroid Fusion appear much darker than it was intended to be. So with this in mind, I highly recommend playing it on either a Game Boy Advance SP or the Virtual Console version for the Wii U. This will really allow you to experience everything this game has to offer.

For me, this is one of my favorite Metroid games. It keeps the retro 2D gameplay but combines it more modern visuals and excellent storytelling. Playing this game again after so many years was a real treat and it has me pumped for the next Nintendo titles on my list. This is a game that comes recommended to any sidescroller or platformer fan. 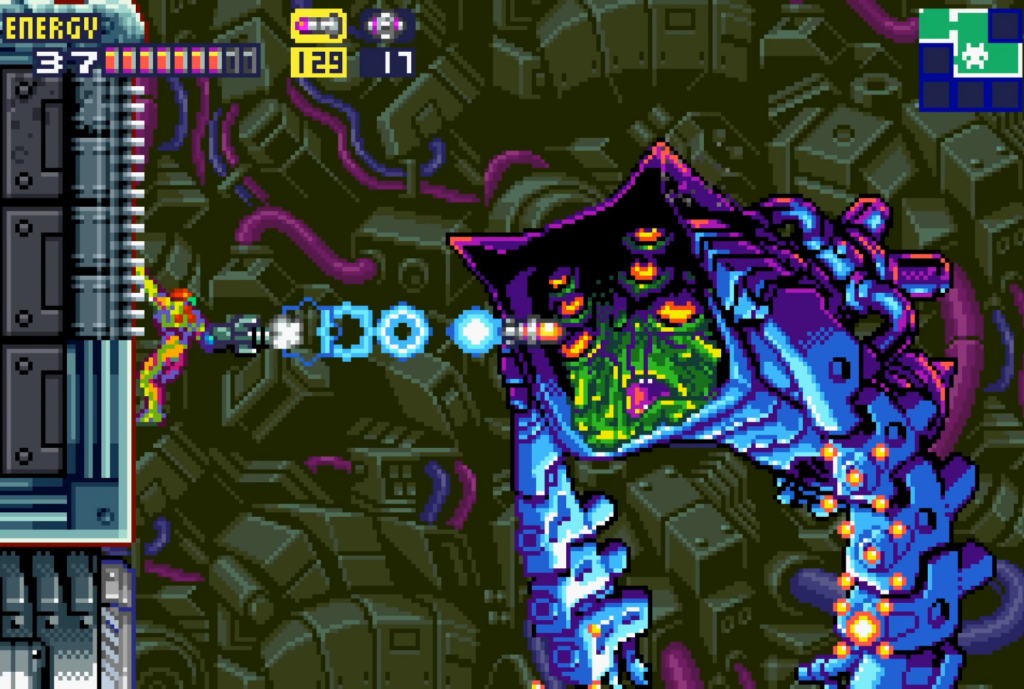 Difficulty: Hard –  Early on, this game can be quite a beast. When first starting out, even everyday monsters can be quite deadly… not to mention the boss battles. Thankfully, it does get easier as you go. That being said, I’ve certainly played harder platformers.

Story: Until now, any lore behind the Metroid series came strictly from the game manual. This time around, the plot details are baked into the game itself. In fact, the entire game is very much plot-driven. This is a big step in the right direction for the series.

Originality: The basic formula behind this game has been seen a number of times. However, Nintendo manages to keep it fresh by giving Fusion an excellent background story, a chilling adversary, and a new and colorful world to explore.

Soundtrack: This game follows the Metroid trend of weird/ambient music. But this time there’s also some military-themes tunes as well as a number of mood-setting pieces. The musical tracks in this game are not as iconic as what is found in the original Metroid. But they are very well done and fit this game extremely well.

Fun: If you’re a fan of the series, you’re going to have a blast with this title. Even if you’ve never played a Metroid title before, there’s plenty about this game to enjoy. The story is great, graphics are pretty, and there’s plenty of challenge to keep players on their toes.

Graphics: As I mentioned earlier, this is a beautiful game. The sprites are just as good as Super Metroid and the background is even better. To get the most out of this game, I do recommend playing on a GBA SP or a Wii U to avoid issues with a lack of backlighting.

Playcontrol: No complaints. The controls are largely precise and responsive. Later in the game, there’s a few attacks can be a bit tricky to pull off due to the controller layout. But this is minor. If playing on the Wii U gamepad, the controls do seem a bit touchy. But again, it’s nothing that can’t be conquered with a small period of adjustment.

Value: Metroid Fusion is available on the Wii U Virtual Console for about $8.00. In my opinion, it is worth every penny of this price. Physical copies typically run anywhere from $12-$40 depending on the market. If you’re a collector, these prices are worth it. But for casual players, the Virtual Console version is the way to go.

Overall score (1-100): 90 – This is a fantastic game that’s well worth the time of any player. In terms of quality it ranks right up there with any console-based Metroid title. This is one title that deserve a proper re-release at some point in the future. If you’re a Metroid fan that skipped over this one simply because it was a handheld release, you owe to yourself to get a copy of this game.

Available today on: Currently unavailable  – (Updated as of Spring 2022)