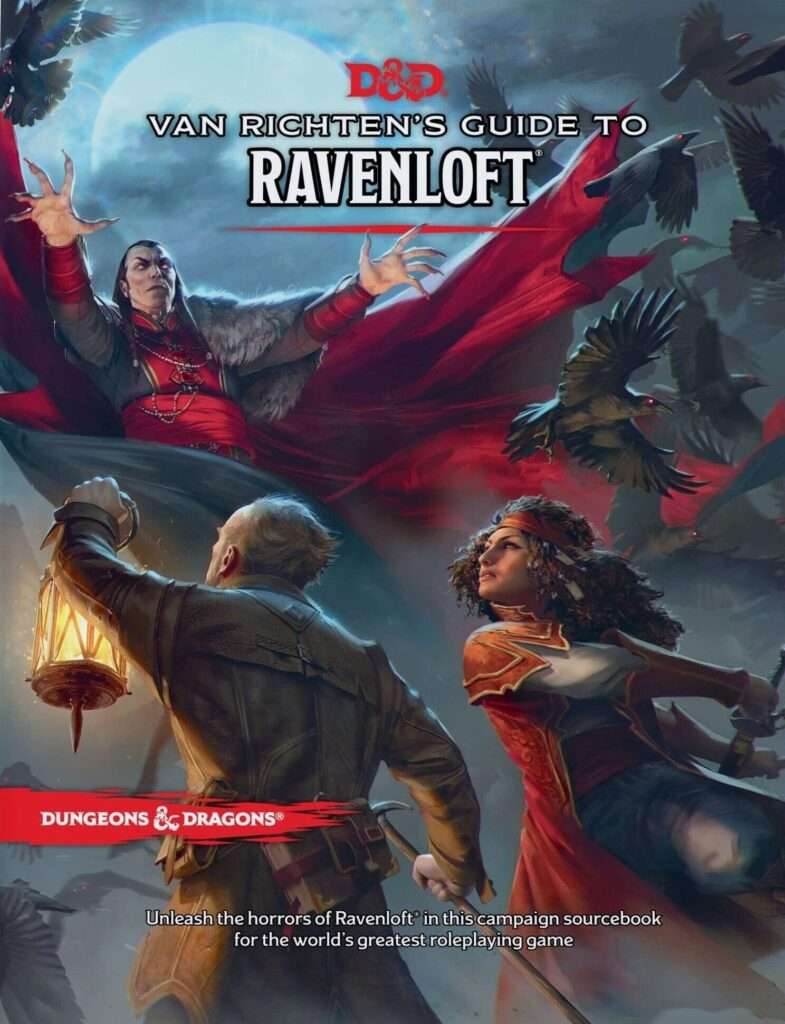 For me, Ravenloft has always been one of the most fascinating settings for Dungeons & Dragons campaigns. Ever since I was a kid, I’ve had a fascination with gothic horror. This is something that originally stemmed from viewing old Universal Monster movies as a young child. Then, around the age of thirteen I got my hands on an old copy of Dracula by Bram Stoker. Reading that book began an obsession with both the character of Dracula and his homeland of Transylvania. It wasn’t long after that I discovered the Ravenloft campaign setting for 2E D&D. Needless to say, I’ve been a fan ever since.

Van Richten’s Guide to Ravenloft isn’t the first Ravenloft product released for 5E, (that honor goes to the Curse of Strahd adventure). But, this book does serve as the official 5E Ravenloft campaign sourcebook. This is something that I feel is long overdue.

For those who are not aware, Ravenloft is not a world upon which players live. Instead, it is a collection of demiplanes. Officially known as the Domains of Dread, these pockets of land exist somewhere on the Planes of Shadow. Surrounded by strange mists, these demiplanes each host a unique horror-themed land for players to explore. In reality, these domains serve as a prison for various Dark Lords. The fear and suffering these Dark Lords inspire help provide sustenance to some mysterious greater powers. So far in 5E D&D, we’ve been introduced to the domain of Barovia, the home of Castle Ravenloft and its dark lord Strahd. But there are countless other domains hidden within the mists. This book finally details some of them. Nearly every genre of horror is covered in these pages of this book; zombie apocalypses, Egyptian-style mummies, aliens, slashers/stalkers, etc. If it’s something that scares you, there’s a domain crafted specifically for that fear. But, it doesn’t end there. This book also contains details that help Dungeon Master create their own Domains of Dread. The possibilities are limitless.

Like any campaign sourcebook, Van Richten’s Guide is filled with lore and background information on the various Domains. It also contains new character options such as horror-themed races, subclasses, and traits. As expected, this book also introduces plenty of new monsters and magical items. There’s even a short mini-adventure to help set the tone before diving in head-first to a full Ravenloft campaign.

Another of my favorite things included in this book are the DM toolkits that outline various options like curses and traps. Years ago, I used to spend lots of money on third-party supplements that detailed poisons, traps, and trickery. So it’s nice to see this concept included in an official product.

In my opinion, this is one of the more intriguing releases for D&D in recent memory. Yes, we’ve been treated to a number of interesting campaign books in the last few years. But none of them have contained the wonder and level of possibility that this book offers. Perhaps I’m biased due to my love horror. But I’m more excited by this book than any other recent D&D release. On top of that, this is simply a quality product. I hope WotC continues with this trend.