I remember back when Windows 10 was initially released, Microsoft made the comment “Windows 10 will be the final version of Windows ever.” That’s quite a bold claim! After all, as someone who has been using Windows ever since the 3.1 days, I’ve seen many iterations of the OS. And, as a former Microsoft beta tester, I’ve even had my hands on versions of Windows that never saw the light of day. I guess that’s why when Microsoft made the recent announcement that they would be releasing Windows 11 at the end of this year, I wasn’t exactly surprised by the news. But, regardless of how unsurprised I was by the revelation, the introduction of Windows 11 is a pretty big deal.

Now, allow me to let you in on a little secret… even though Microsoft has said that Windows 11 won’t come out until Fall of this year. The truth is, the OS has actually been released to manufacturing. This means that Microsoft has already completed the “final” build of the Windows 11 and is sending those bits to companies to include on their new hardware. So yes, the “development” build that is available to Windows Insiders right now is actually the release version of Windows 11. That being said, if you were to install Windows 11 today, your experience is still going to be quite different than if you wait until the OS is officially released and distributed. As it turns out, Insiders have actually been testing the core components of Windows 11 for well over a year. It’s the user interface that’s going to be updated and polished over the coming months. But even so, these fixes will come in the form of day one patches/cumulative updates.

As you might expect, I’ve already compiled an ISO from the developer branch and performed a clean install on my system here at home. So, without further ado, let’s take a look at an actual screenshot of Windows 11: 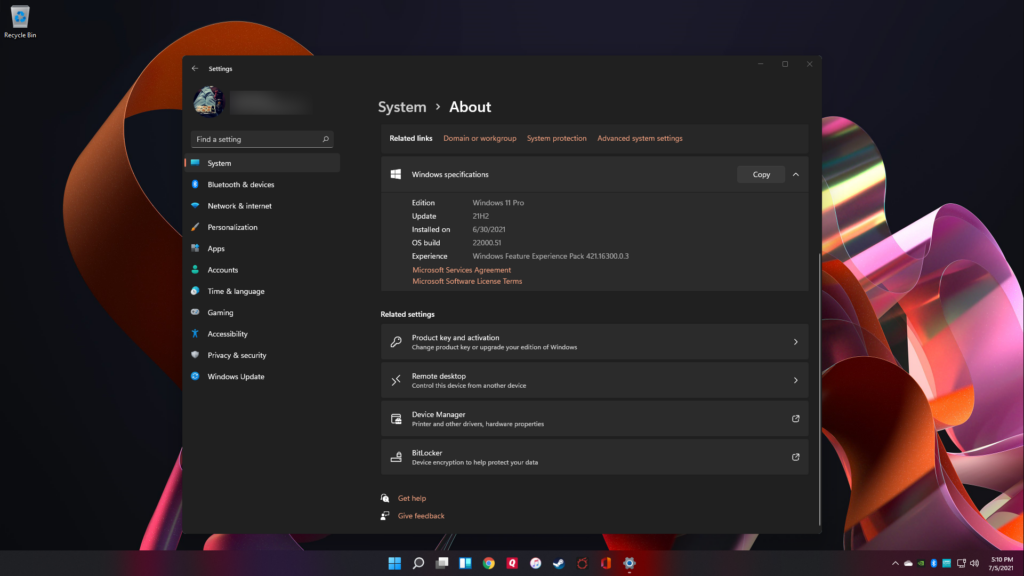 One of the first things that you’ll probably notice is the the taskbar. The Start button and icons are centered in the middle of the bar instead of being left-justified. Microsoft’s reasoning for this is the fact that users tend to be focused on the center of their screens. This is a philosophy long held by Apple. In fact, this change actually brings the taskbar experience very close to that of the dock found in Mac OS. Personally, I welcome it. I’ve always been a fan of the Mac OS UI and this change makes Windows just a bit more Mac-like. But of course, many long-time Windows enthusiasts seems to be put off by the change.

If you think the taskbar is controversial, let’s discuss the changes to the Start Menu. For reference, I’ve included another screenshot below: 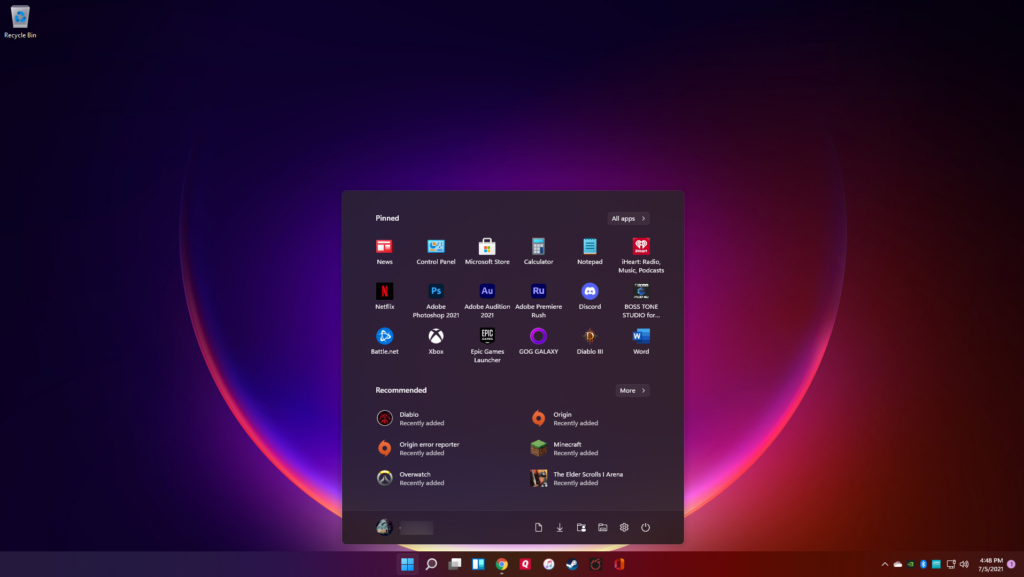 As you can see, the Windows 10 “live tile” Start Menu is gone. Instead, we now have three rows of pinned items and an area of “recommended” icons. The “recommended” area is actually an amalgamation of newly installed programs and recently opened files. What appears here can actually be fine-tuned by diving into the Windows settings.

While this new streamlined menu is great, there will be times where users will need to access something that doesn’t appear in either area. For that, clicking the All Apps button in the corner will bring out a classic-style Start Menu with a list of all applications installed on the OS.

The next biggest change to the OS is the inclusion of Widgets. This is actually something that Microsoft has tried before in older versions of Windows but it never really took off. See the screenshot below for an example of what I’m talking about: 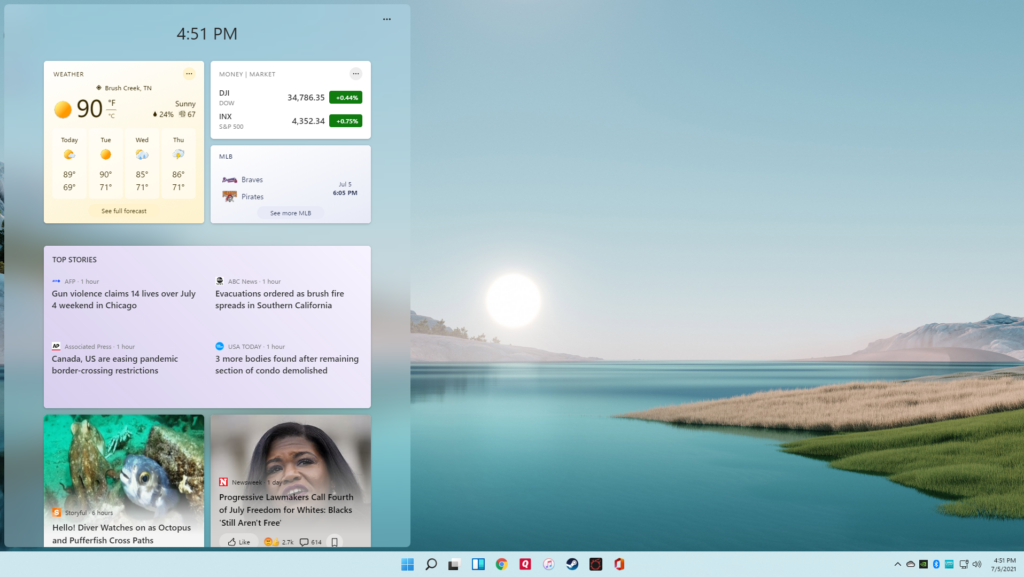 The Widgets button on the taskbar will slide out a panel from the left side of the screen that displays things like news and weather. It’s very similar to the Widgets bar found in iOS, but Microsoft is promising more localized content by the time Windows 11 is released. Personally, I think this has potential. But currently, it’s just a way for MS to push their own services. We’ll see just how customizable this actually ends up being.

So far, we’ve seen a lot of big redesigned features. But the new Windows 11 UI also boasts a number of more subtle changes. To start with, window corners are now rounded and nearly every icon in the OS has been updated and modernized. Windows 11 also features some pretty big changes to the “snap” system, now allowing users to customize their window layout to an even greater degree. It seems like Microsoft is really trying to make Windows 11 feel more like a sleek and exciting OS.

Visuals are great. But what really impresses me is functionality. That’s why the announcement that has me the most excited is this: native support of Android apps in Windows. That’s right! Microsoft has developed a Windows subsystem for Android that will allow users to install Android apps directly on Windows. For many, this could be a gamechanger. Let’s say you use something like Whatsapp to communicate with a family member in another country. You’ll now have the ability to use that app directly on your PC.

At this time, the Android functionality is still not available and won’t be until shortly after Windows 11’s official release. But the fact that this is coming is pretty exciting. As someone who recently switched back to iPhone, this inclusion has me considering a move back to Android in the future.

So far, all of this sounds great! So you may ask, what do I need to do to get Windows 11 when it’s finally ready? Well, the good news is this; if you have Windows 10 now, you can upgrade to Windows 11 for free. The only caveat is that Windows 11 has some pretty strict minimum system requirements. To start with, at the time of this writing, Microsoft is claiming that only 8th-gen processers and newer will be able to run Windows 11. However, they have backed off on this a bit and are considering allowing some 7th-gen and lower CPUs. Second, Windows 11 will require a PC that supports TPM 2.0. TPM is a security technology that requires a special chip to be installed on the mainboard. TPM itself has been around for a few years. But many PC motherboards do not directly support it. This is especially true for many gaming boards. In fact, the mainboard I use in my PC does not have TPM support. Thankfully, most modern processors (mine included) support virtual TPM directly on the chip – it just has to be enabled. But still, this is something the average Joe has no idea how to do. Personally, I find this requirement to be pretty asinine. It is entirely unnecessary, and seems like an attempt by MS to force users into buying a new PC. I predict quite a bit of backlash once the average consumer realizes this.

The final thing I want to talk about are the changes to gaming in Windows 11. To start with, any games you enjoy in Windows 10 will continue to work in Windows 11. After all, it’s the same core OS. But Windows 11 is adding a couple of cool features that will benefit gamers. The first is DirectStorage. This is a technology that’s moving over from the Xbox. It allows certain assets of the game to be loaded directly to the graphics card instead of being routed through the CPU first. This is helpful because it means your CPU will be able to allocate more processing power to other tasks. The next biggest change is Auto HDR. This feature will allow users with HDR compatible monitors to experience games in HDR (high dynamic range of colors) automatically if they support that support the feature. This is not really a super big deal, as HDR is already available in Windows 10. But having it enabled automatically is certainly a nice touch.

In closing, I want to mention that I’ve been using Windows 11 for well over a week and so far, I’ve encountered very few issues. What problems I have come across have been minor cosmetic issues that are undoubtably going to be fixed between now and the official release date. So, if you’re feeling bold, feel free to join the Windows Insiders program and install the version from the Dev branch. Rest assured, you will continue to received updates as we inch closer to the official release.