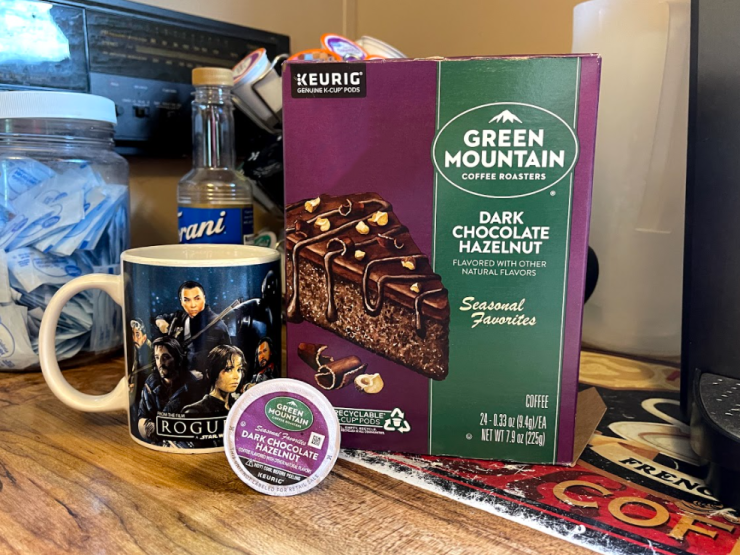 It may not feel like it, but the fall season is less than a month away. So as usual, I began looking for some new seasonal brews to try. Generally speaking, fall is the best time of year for coffee lovers. There’s certainly no shortage of pumpkin or maple flavored coffees on the market during the fall months. But this year, I found something a bit different! It seems that Green Mountain has released a Dark Chocolate Hazelnut flavor as part of their Seasonal Favorites line. Now, I typically don’t associate either of these flavors with autumn, so this seems like a bit of an odd choice. In fact, it makes no sense to me whatsoever. With that in mind, let me say that I’d normally wait until fall is actually upon us to review a “fall coffee”. But since this flavor seems so uncharacteristic, I decided to jump the gun and go for it.

So, let’s get into it. I’m a fan of both dark chocolate and hazelnut. So I was pretty eager to get some of this into my mug. I’ll start off by saying the brew process smells amazing! It’s exactly what you’d expect – a good balance of rich dark chocolate aroma, with a subtle hint of hazelnut. No big surprises thus far. In fact, the same can be said for the taste as well. The coffee itself is a medium roast, with a slightly earthy flavor. The dark chocolate is very prominent but it is followed by a very silky hazelnut finish. It works extremely well.

Like most coffees, the flavoring is artificial. But, it doesn’t taste like it. This surprised me a bit, as Green Mountain can often be hit or miss with their flavoring. Still despite being well done, I just didn’t find the flavor particularly exciting. Don’t get me wrong, this coffee is delicious. But I feel like chocolate and hazelnut have been done to death. It just feels like there’s something missing here. But I can’t quite put my finger on it. This is also one of those flavors that feels like it would work much better as an iced coffee option, rather than in a traditional hot mug.

Regardless, I can’t deny that this is a quality release. If these flavors are your thing, you can’t ask for a better option.

Would buy again?: Maybe. This is without a doubt, a high quality coffee. However, at least to me, it just seems a bit boring and unimaginative. That being said, I can recognize that this flavor is going to be exactly what many people are looking for.