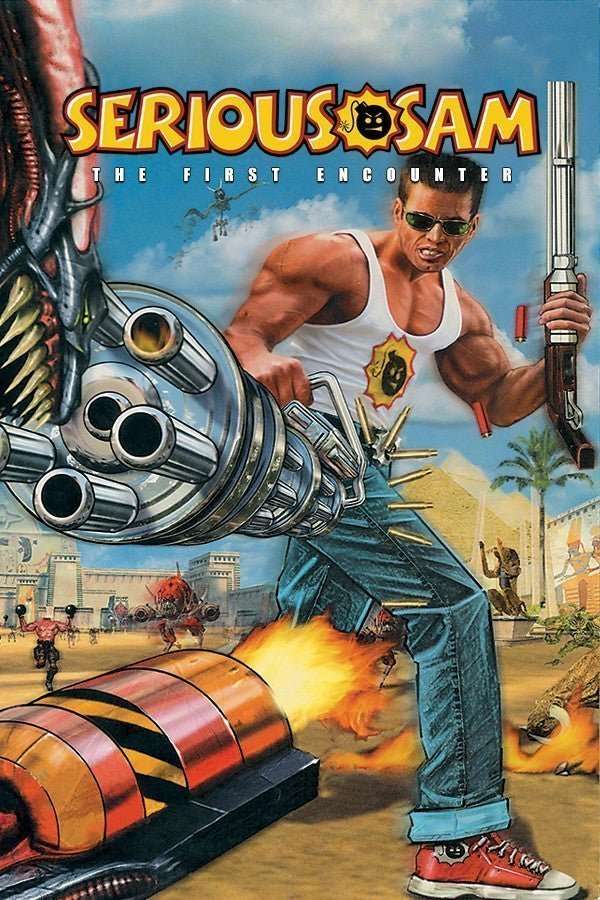 It’s time to get serious! My recent review of Battlefield 1942 really had me itching for some more first-person action. So after combing through my backlog I came across the perfect title; Serious Sam – The First Encounter. This is a game that’s been sitting in my Steam library since 2013. I think it’s beyond time for me to blow the dust off this baby and give it a spin.

Serious Sam is a first-person shooter developed by a rather obscure company called Croteam. Originally released in 2001, Serious Sam may appear to be just another dime-a-dozen FPS title. But there really are a few things about this game that made it stand out against the competition of its time. To start with, the gameplay is a bit more dynamic than most FPS games of the era. What I mean by that is, most FPS games throw the player in a 3D map or arena that is filled with enemies. These enemies are placed in specific locations and await the player. While this is also true for Serious Sam, there’s also a much more chaotic element to enemy placement. For example, just standing around idle will cause new enemies to spawn and attack. Also, venturing to certain areas on the map will also trigger new enemies to appear. The developers take full advantage of this mechanic – often times placing valuable power-ups or ammunition in some nook and cranny to lure in the player, then surprising them with a slew of enemies appearing in front of their very eyes.

This game also boasts an engine that is capable of rendering extremely far draw distances while still supporting fairly low-end PCs. As impressive as that is, most players these days are unlikely to play the original release of the game. In 2011, Croteam released an HD version of Serious Sam that was built on an entirely different engine. Visually, Serious Sam HD is vastly superior to the original game while keeping all of the gameplay mechanics intact. Due to the improved gameplay experience (and better compatibility with modern versions of Windows), Serious Sam HD is the version of the game that I recommend. It is also the version of the game I played for this review.

Serious Sam tells the tale of a futuristic soldier, Sam Stone. In Sam’s time, the planet Earth is engaged in a conflict with an evil alien being known as Mental. During the course of the war, humanity learns that in ancient times, Earth was once the battleground between Mental and another, friendly race of aliens called the Sirians. The conflict is nearly over and Mental is on the cusp of victory. To prevent this from happening, Sam is sent back in time to ancient Egypt – the age where the Sirians once aided humanity. The hope is that Sam will be able to take his futuristic experience and defeat Mental during the ancient war, thus preventing the current conflict from ever happening in the first place.

The game takes place entirely in ancient Egypt. Players control Sam as he explores monuments and pyramids, searching for relics to aid him on his mission. Sam is equipped with a special quantum AI that provides information on everything from enemies to the environment. Players are able to view this information at any time (and should, as it often provides important clues).

Describing the gameplay is actually somewhat difficult. At first, Serious Sam starts out feeling very much like Doom or Quake. But as soon as enemies start swarming you in waves, it’s quite obvious that this is a very different beast indeed. Occasionally, Sam will pop off quips and one-liners in a way that reminded me a Duke Nukem. But at no point does the game become completely comical.

All of the typical FPS norms are also present. Players start the game with a basic pistol but as they progress will find a huge arsenal of weapons to choose from. Health and armor are displayed onscreen as well. Serious Sam also keeps track of discoveries and kills in the form of a “score”. This is present in the upper-left corner at all times. But aside from serving as a highscore counter, it serves no functional purpose in the game.

The main scenario for this game packs a decent amount of content for a turn-of-the-century FPS. I took me approximately seven hours to complete the game. After that, I moved on to the multiplayer content. Serious Sam features both Co-op and Vs. multiplayer. Sadly, the online community is not active at all for this title. Using the in-game match browser only turned up a handful of online servers, none of which were populated at all. In fact, in order to experience any of the multiplayer content, I had to recruit the help of a friend. This was made easy due to the fact that the game supports Remote Play via Steam.

Despite the vacant multiplayer landscape, Serious Sam still provides a pretty good experience. The graphics in the HD version are lovely (even by today’s standards), and the action is pulse-quickening. As an old fan of FPS games, this title managed to keep me on my toes in a way that few games can these days.

Difficulty: Variable –  Serious Sam offers six levels of difficulty to choose from: Tourist, Easy, Normal, Hard, Serious, and Mental. For first-time players, I recommend starting with Easy. Normal starts off at a fairly leisurely pace but ramps up in difficulty rather quickly. Anything above Normal is going to be quite a challenge. The Mental option is locked by default and is only available after completing them game. Mental actually provides the same experience as Hard, with an added twist – the enemies phase in and out of view! As always, online matches will vary in difficulty depending on the skill of other players.

Multiplayer: Online Co-Op and Vs.

Story: The scenario presented in this game is actually quite good. Sadly, most of the story is printed in the physical manual. Still, the game does a decent job of providing enough information through the in-game AI computer.

Originality: By the time this game was released, FPS titles were nothing new. Serious Sam manages to keep things fresh by adding dynamic enemy placement and fast-paced action.

Soundtrack: The music in the game is very well done, but not particularly memorable. Still, it’s fitting and I have no real complaints.

Fun: This may sound weird, but this game is actually much more entertaining when played at higher difficulty levels. That being said, cranking up the difficulty is almost sure to spell disaster for any but the most hardcore players. But it’s still fun to experience the thrill of being pounced on by droves of monsters that seem to come from nowhere.

Graphics: The original release of the game features from pretty impressive level design and background graphics. The enemy sprites, however leave a little to be desired. The HD release is an across-the-board improvement. Both the enemies and backgrounds in Serious Sam HD look fantastic, even today.

Playcontrol: Being a PC-based FPS, the controls default to mouse and keyboard. The game supports the standard WSAD model and works very well this way. There’s also controller support. I tried it with an Xbox One controller and found it to be pretty tight and responsive. But, personally the game just didn’t feel as natural when played with a controller.

Value: Serious Sam goes for around $6 on Steam. The HD version typically sells for around $15. Either price is pretty decent on its own. However, the best value can be found by purchasing the Serious Sam HD Gold Collection. This collection costs about $40.00 and includes the first two games, DLC and spin-off titles.

Overall score (1-100): 70 – Serious Sam is a fairly solid FPS with a unique visual feel. If you’re a fan of fast-action FPS games, this is a title you might want to keep an eye out for. However, if online play is your cup of tea, you should be aware that the multiplayer for this title is a wasteland.