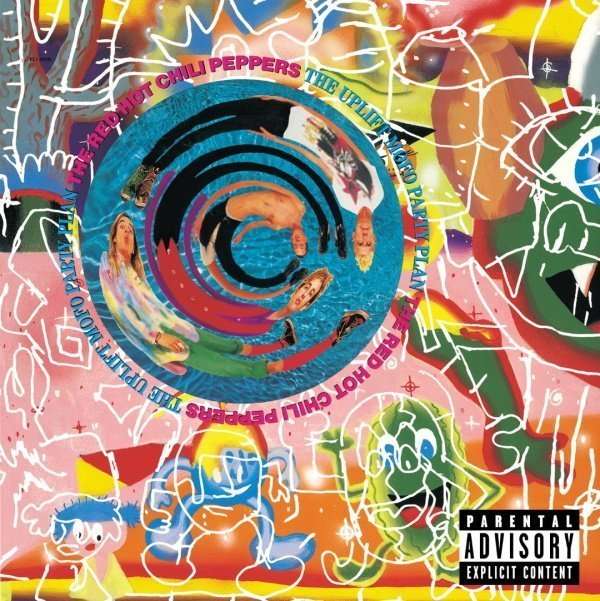 I’ve always been a creature of habit. Once I take an interest in something, I like to deep-dive into the topic. My introduction to the Red Hot Chili Peppers was no different. It wasn’t long after I was introduced to their Blood Sugar Sex Magik album, that I started to collect all of their previous records. So far on this site, I’ve discussed the first two releases in their catalog. This post will be an in-depth look at their third album (and one of their most interesting); The Uplift Mofo Party Plan.

For me, this album is the end of an era. At least in my mind, this record seems to sunset the original RHCP “sound”. It’s hard to explain why. I mean, many of the ingredients that defined even the earliest RHCP releases can still be found in their most modern albums. But there’s a definitely a youthful/unpolished energy about their early releases. And this album seemed to be the last hoorah for that overall feeling. Perhaps this was due to the fact that this record is the last to feature the complete “classic” Chili Peppers lineup. Sadly, guitarist Hillel Slovak passed away not long after the release of the album. And away with his passing also went his iconic guitar sound.

At any rate, there’s a lot to talk about on this album. So let’s jump in to a track-by-track analysis.

1: Fight Like a Brave –  This is the perfect track to launch the record. It’s a high-energy rock song that features every element of the classic RHCP formula; rapped lyrics, frat-boy chants, and slap-bass funk. However, this song also features a heavier, more rock-influenced edge as well. This harder edge really seems to be the perfect addition to the Chili Pepper’s audible soup. Delicious! This track also represents the only actual single from the album proper. One of my favorites!

2: Funky Crime –  The second track seems to harken back a bit to what old fans are familiar with. This is a solid funk song that could have easily been found on Freaky Styley. It’s catchy and groovy, but if I’m being honest, it’s just mediocre.

3: Me & My Friends –  Here we have something a bit different. A hard rock chorus with a funky verse. For some reason, I’ve always enjoy this song. But I imagine that for most fans and especially for the casual listener, there’s probably nothing about this track that will turn any heads.

4: Backwoods –  At this point in the album most listeners should be able to see a trend forming. This album is classic RHCP with a harder presentation. Here we have a track built on a funk foundation with an in-your-face hard rock exterior. It’s a simple tune, but one that’s always appealed to me. Listening to this song never fails to get me pumped!

5: Skinny Sweaty Man–  If you’re an older fan clamoring for the vibe of some the band’s earliest recordings, this song is probably for you. Here we have a short, but funky silly tune. Anthony spits a ridiculous rap over a funky bassline. There’s not much of a point to this track honestly. It could easily be considered a throwaway song.

6: Behind the Sun –  For many, this song is probably the most recognizable on the album. While it wasn’t initially selected as a single for this album, it was later chosen to represent the band’s first “greatest hits” compilation. For this track, the distortion is turned off and instead we have an ethereal Middle-Eastern sort of vibe. Artistically speaking, this song is very well done. But despite its popularity, this song has never been a favorite of mine.

7: Subterranean Homesick Blues –  This track is a Bob Dylan cover. I’m typically not a big Dylan fan (even when it comes to cover versions), but I do enjoy the RHCP rendition. It has a pretty rocking edge and it fits their style very well. Surprisingly, this is another of my favorite tracks on the record.

8: Special Secret Song Inside –  Let me start by saying that Special Secret Song Inside was not the original title for this track. But at the time this record was released, they didn’t think they could get away with printing the actual title on the album sleeve… we will leave it at that. This track is another rocking/rap fest. It packs a solid groove and some really impressive guitar work. The lyrics are raunchy and a throwback to some of the band’s earlier work. A truly great track.

9: No Chump Love Sucker –  If you can imagine mixing funk, metal, and punk rock together – you’d end up with this track. It’s a fast-paced energetic romp. Lots of fun, but somewhat forgettable. I can imagine this song probably works amazingly well when performed live, however.

10: Walkin’ on Down the Road –  If you had to give someone an example of the RHCP “sound”, this song would be a pretty good pick. It’s funky, fun, and a prime example of what this band does best. Sadly, it’s not particularly memorable.

11: Love Trilogy – Here we have something completely out of left-field. This song has some pretty solid reggae roots at the beginning but quickly erupts into a slap bass/rap showcase. From here, it only accelerates into a full-on punk rock jam. But just as quickly as it begins, it winds down. This is a very odd track. It’s not likely to be anyone’s favorite, but it actually manages to showcase the versatility of  the group in a great way.

12: Organic Anti-Beat Box Band –  The album ends with a track that takes nearly every musical element found on the album and rolls it up into one song. Every aspect of the Chili Pepper’s sound can be found here. It is a great capstone to the record, even if it doesn’t really manage to stand out.

On its own, this album probably isn’t going to garner a lot of attention. RHCP fans will certainly find a lot to love about it. But more casual listeners might prefer something a little more radio friendly. However, as a musician myself, I find this album pretty fascinating. Every album in the Chili Pepper’s portfolio thus far has always managed to show a pretty steady evolution of the band’s sound. This record is certainly no exception.

When listening to albums, I always suggest enjoying them on a nice Hi-Fi stereo system, or on a portable device with a good pair of headphones. When listening to classic records like this, I prefer the original release to many of the “remastered” editions. Often times, remasters are overly loud and actually contain a lower level of quality than the original album. The 2003 remaster of this record suffers from this problem. However, it’s worth noting that the remaster also features a few bonus instrumental demos that might be interesting to hardcore Chili Peppers fans.

When listening to a record, always listen from start to finish. Unlike pop albums, many good rock records are sequenced in a certain order. Some songs tend to be more enjoyable when following the song preceding them. That’s not particularly true with this album, but that’s still my general practice. To me, this album is best enjoyed while engaging in some other activity. Put the record on while you’re driving, or doing house work. Let it play in the background. Listen it to a few times. As I’ve said many times before, some records need to grow on you. This is a fine example of one of those records. If it doesn’t strike a chord with you at first, give it a few more listens, your opinion may change. No matter what you think about this particular album, it’s certainly not boring.