Fighting games. A genre that just never goes out of style. Over the years I’ve covered a number of classic brawler titles. Street Fighter, Mortal Kombat, Dead or Alive, and of course, Tekken. It’s been well over a year since I posted my review for Tekken 3 (a game that actually earned a perfect score from me). Even though I took a break from the franchise to focus on other titles, I’ve been extremely excited to finally get my hands on the next chapter in the series.

As was the case with the previous game, Tekken 4 is a title that I never had the chance to play when it first came out. If you’re like me, and you’ve decided to sink your teeth into this game for the first time, there’s something you should know right up front. You’re going to need an actual Playstation 2. That’s right, Tekken 4 was a PS2 exclusive and at the time of this writing, it’s never been released digitally on any other platform. Assuming you have a working PS2 (and many of us still do), obtaining a copy of the game will require a bit of effort as well. Amazon marketplace is often sold out of the title. So for this one, Ebay is going to be your best bet.

Before diving into my review of the game itself, let’s take a moment to get caught up on the story. (Note, the following paragraphs assumes you are already familiar with many of the events and characters of the previous game.) Tekken 4 takes place two years after the events of the third game. In the Tekken canon, Paul defeats Ogre and seemingly wins the third tournament. However, after Paul’s departure, Ogre is revived in his true form and subsequently defeated by Jin (thus making Jin the official winner). However, all of this is rendered moot when Jin is shot and killed by Heihachi. Upon his death, Jin’s body is reanimated in the form of a devil and flees the scene.

Obsessed with the idea of immortality, Heihachi begins research into genetic manipulation. His ultimate goal is combine his own DNA with that of a devil, hoping it will grant him eternal life. Eventually, he uncovers that another corporation is conducting the same research, and in doing so, has resurrected his son Kazuya! Knowing that Kazuya’s body would contain all of the DNA markers needed to make his experiments a success, Heihachi announces a fourth King of Iron Fist Tournament. This time, granting to control of his corporation to the winner. Of course, all this is done in hopes of luring Kazuya out of hiding. 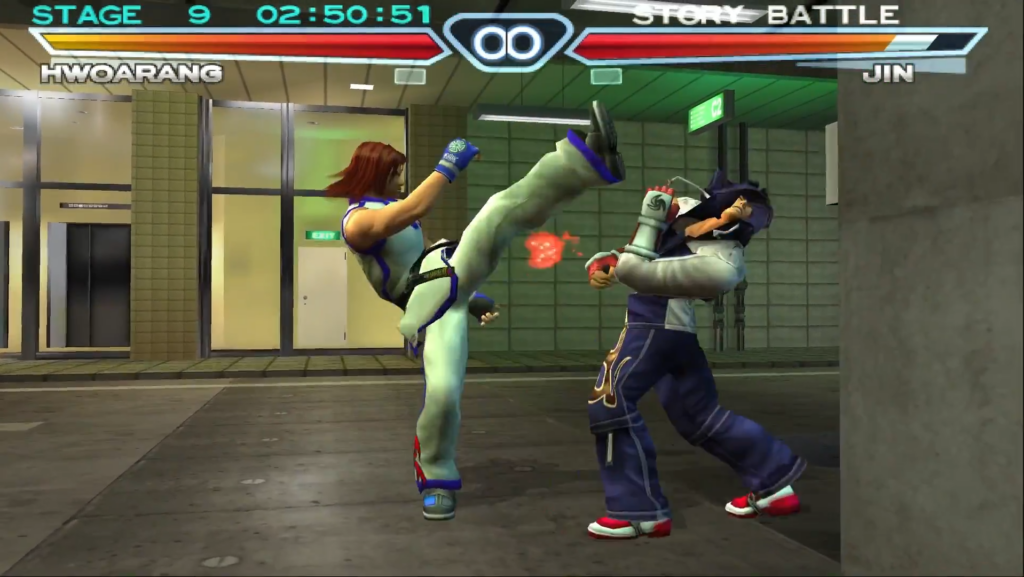 During the development of Tekken 4, NAMCO made the decision to give each character a fairly unique playstyle. And as a result of this decision, the roster in this entry has been streamlined a bit. While there’s still a handful of new characters, the majority of fighters in this game are familiar faces. Characters carried over from the previous games are as follows: Hwoarang, King, Kazuya, Paul, Yoshimitsu, Xiaoyu and Law. Heihachi, Jin, Eddy, Julia, Lee, Kuma, Nina, Lei, and Panda are also available, but as unlockable characters.

The following characters are new additions to the series:

Christie – A capoeira fighter who was trained by Eddy. As the end of her training neared, Eddy mysteriously abandoned her. Christie has come to the tournament hoping to learn the reason her master left so suddenly.
Steve – A former English boxing champion. Steve has spent the last several years on the run from the mafia for refusing to throw a fight. After coming to terms with the fact that he will never be able to outrun the price on his head, Steve has decided to emerge from hiding in the biggest way possible, the King of Iron Fist Tournament.
Marduk – A criminal who was convicted for manslaughter after killing the original Armor King in a bar fight. After serving only part of his life sentence, Marduk is mysteriously freed from prison and provided a plane ticket and a flyer for the King of the Iron Fist Tournament.

The following new characters are initially locked-out of the starting roster, but can be unlocked as playable characters:

Violet – Violet is the alter-ego of Lee. Since the events of Tekken 2, Lee has become the CEO of Violet Systems. He has entered the tournament in hopes of promoting his company’s fighting robots.
Combot – One of Violet/Lee’s robot warriors.
Miharu – A friend of Xiaoyu. Like her friend, Miharu has entered the tournament in hopes of discovering the truth behind Heihachi and the nefarious Mishima Zaibatsu corporation.

For the most part, if you’ve played a previous game in the Tekken series, you will know what to expect from this entry. Many of the things that make Tekken so unique are still present in this game. The biggest change this time around is the fact that the stages are not “infinite” (meaning they scroll continuously to either side). Instead, every level in Tekken 4 is walled. This change actually introduces one of the biggest new mechanics to the series. Players are now able to slam their opponents into walls for additional damage. Aside from these walls, there’s also other environmental obstacles to deal with (uneven ground, tree stumps, pillars, etc).

One thing about this game that I found slightly puzzling is that fact that while Tekken 4 introduces things like smaller arenas and obstacles, the maneuverability of the characters has been somewhat lessened. What I mean by this is, the characters in Tekken 4 seem slower and slightly less fluid than they did in previous games. Also, for whatever reason, in this title they are unable to jump backwards. Since these changes affect all characters, this isn’t really a detriment. But it still seems like a very odd choice. Another thing worthy of mentioning, is that fact that for all of NAMCO’s focus on balance. There’s a handful of characters that seem to have a pretty obvious advantage when it comes to dealing damage (Jin for example – in this game he is able to jab at a rate much faster than nearly any other player).

Being a PS2 title, Tekken 4 is visually leaps and bounds beyond anything that’s come before in the series. It takes advantage of the progressive scan capabilities of the PS2 hardware, it features true dynamic lighting, and fantastic cinematics. Tekken 4 also takes full advantage of the PS2’s audio prowess. This is immediately noticeable in the voice acting and soundtrack. The music is this game is high energy and fast paced. But I found some of the selections to be a bit odd.

This game comes with all of the play modes that fans have come to expect from a Tekken title: Story, Arcade/Time Attack, VS, Team Battle, Survival, Practice, Training, and Tekken Force. The two standouts here are Story Mode and Tekken Force. Story Mode is the single player portion of the game. In this mode of play, you select a fighter and attempt to take them all the way through the tournament. Doing this is what unveils the background story for each fighter and also occasionally unlocks new characters. Tekken Force is a mode of play that was previously introduced in Tekken 3. It’s still a side-scrolling style beat-em up experience, but this time the perspective is tweaked slightly to compliment the new graphics engine.

All in all, Tekken 4 makes up a solid entry in the series. It serves as a great example of what the PS2 was able to bring to the genre. But yet, it still feels a bit unpolished and rough around the edges. The new characters are interesting, but many fan favorites are oddly excluded from this entry. I give praise to NAMCO for being willing to take risks and change up the formula a bit. But to me, this game just didn’t reach the same heights as Tekken 3. 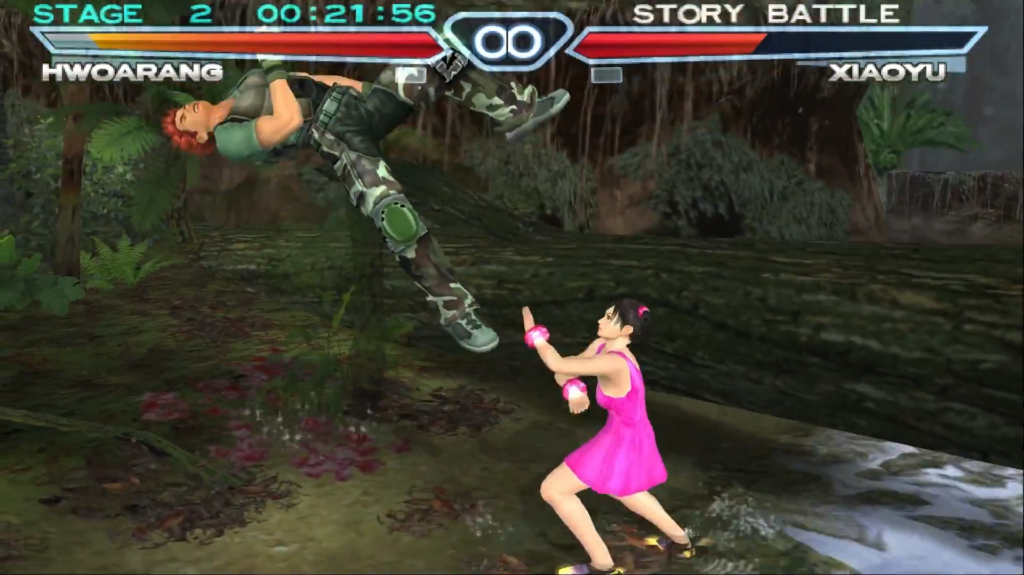 Difficulty: Variable –  Like previous games in the series, Tekken 4 allows the player to select a level of difficulty. Options include Easy, Medium, Hard, Very Hard and Ultra Hard. In this entry, the difficulty levels seem to be pretty well named. Selecting the Easy setting should allow even rookie players to make it to the end battles. Playing on Hard is, as expected, a pretty tough experience. But it is still very do-able for veterans of the series. The Medium setting is the default and the setting that I recommend for majority of players. Of course, when playing against another opponent, the challenge will vary depending on the skill of the other player.

Story: The story for Tekken 4 is pretty detailed for a fighting game. The main scenario behind the game itself is solid and interesting. Each individual character also has a very detailed background and unique tale. Good stuff!

Originality: NAMCO decided to make some bold choices in this entry. Some of these gambles pay off and others do not. Truth be told, there’s nothing introduced here that hasn’t already been seen in other fighting games before. But kudos to the developers for trying to incorporate new elements into the series nonetheless.

Soundtrack: Tekken 4 features some quality voice acting and music. A lot of the soundtrack consists of dance music. But there’s also a few oddball tracks featuring brass and other quirky instruments. Overall the soundtrack is fitting and well done for a game of this sort.

Fun: Like most fighting games, Tekken 4 is best played with others. But just like the first two games, all of the unlockables and alternate game options provide for a fun experience even when playing in single player mode.

Graphics: This is probably the biggest selling point. Tekken 4 is absolutely gorgeous. This is true even today. Both the levels and characters are well rendered and feature some pretty great effects.

Playcontrol: I want to start by saying that the playcontrol and responsiveness is pretty spot-on and accurate. However, the feel of the gameplay is different than what’s been seen in the series thus far. Even though this is by design, the fighting action just doesn’t feel quite as fluid as other games in the series.

Value: Tekken 4 is not available digitally (at least at the time this review was written). Unopened copies can occasionally be found on Ebay for upwards of $60. Used copies are much easier to get ahold of and typically ranges from $5-$20. Personally, I think $15 is a fair price for a complete used copy. But I would be hardpressed to recommend paying much more than that.

Overall score (1-100): 80 – Tekken 4 is a fun and well made fighting game. It provides a great showcase for the PS2, but it does have a hard time standing out among all of the competition. I can appreciate the fact that the developers tried to introduce some new concepts to the series. But in doing so, they also managed to strip out some of things that made the Tekken games so unique.

Available today on:  Currently not available –  (Updated as of Spring 2022)