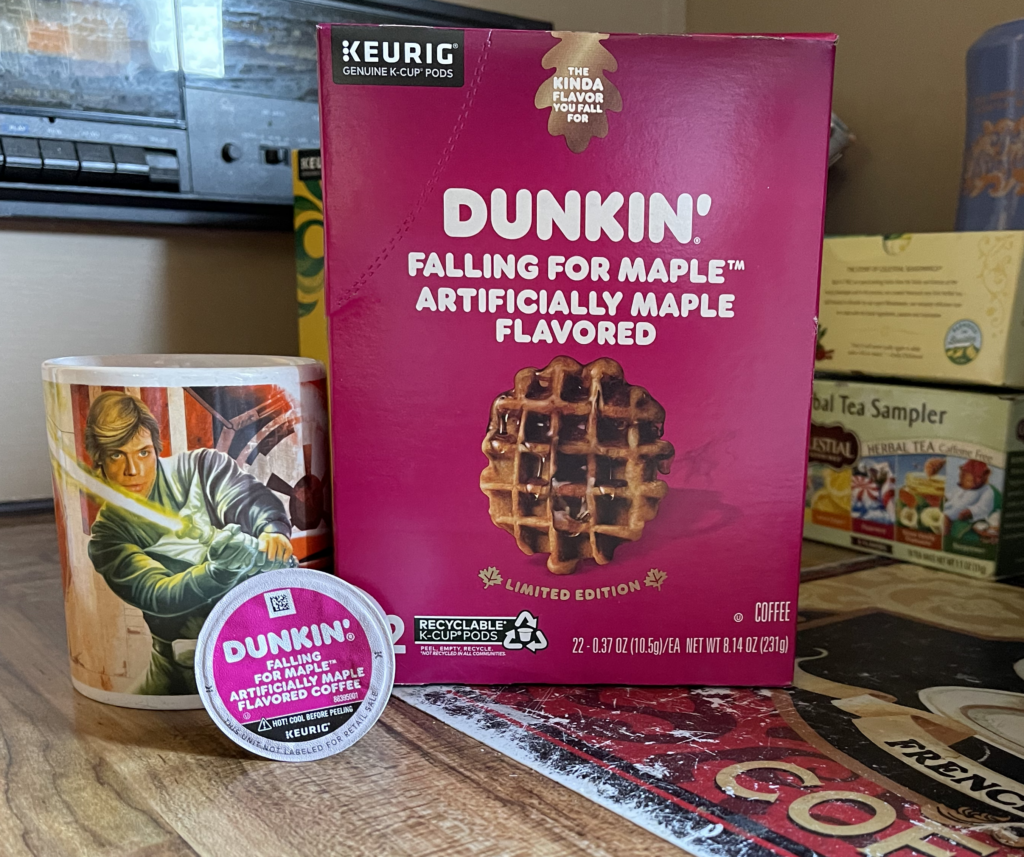 My last coffee review was meant to be the first of a few seasonal reviews. Sadly, in the end, Green Mountain’s Dark Chocolate Hazelnut just didn’t really seem much like a “fall-themed” coffee. But, I think I’ve found something that might fit the bill. A new limited edition from Dunkin’ (formerly known as Dunkin Donuts) – Falling for Maple.

When it comes to coffee flavors, there’s plenty of cheap tasting K Cups all over the place. Consumers know this and tend to look for things with natural flavors. So, I have to give Dunkin’ points for their blunt honesty:  It says right on the front of the box, “Artificially Maple Flavored”. Of course, most flavored coffees are made with artificial flavoring. But putting it out there front and center is a bit of a risk.

The aroma of maple is very prominent during the brew process. So much so, that I immediately became worried that this coffee was going to have an overpowering artificial flavor. However, to my surprise, the maple is very much in balance with the natural taste of the coffee. The coffee itself seems to be a medium roast of pretty good quality! Many companies will use cheap blends for their flavored coffees but I actually suspect this to be Dunkin’s regular house blend with the addition of the maple flavoring. The end result is quite good!

The maple flavor is front and center. But it’s not oversweet and syrupy like so many other maple coffees. It’s quite drinkable and goes down very smooth. The flavor actually comes across as being made with real maple syrup, even though I know better. This is a big plus. Good work from Dunkin’ on this one!

I enjoyed several traditional cups but Falling for Maple would also make a great iced coffee. In fact, I think if prepared iced with milk and some whipped cream, it would really shine.